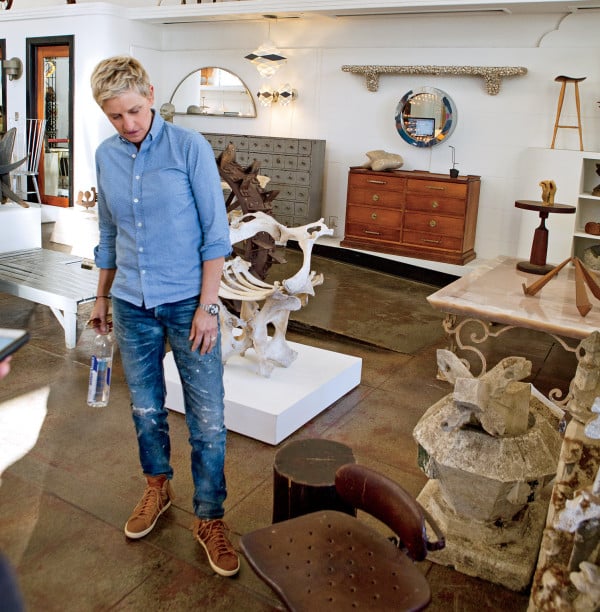 In Los Angeles, 1stdibs dealers see their fair share of celebrities, from movie stars to Million Dollar Decorators. While A-list actors including Brad Pitt and Diane Keaton have made their love affair with architecture and design public, few have been as influential as Ellen DeGeneres, a serial house hunter and gatherer who has bought and decorated a multitude of homes with Hollywood pedigrees and architectural bona fides. Despite her busy schedule, DeGeneres can often be found shopping for antiques, fine art and classic 20th century designs throughout Los Angeles and recently spoke with 1stdibs about the inspirations that led to her first design tome, Home. In the book, the talk show superstar shows off seven of her personal properties and introduces readers to the residences and galleries of some of her favorite interior designers and dealers, including many who can be found on 1stdibs. Here, we spoke with seven of them about what makes DeGeneres a connoisseur and champion of design.

Ellen and Portia have been shopping with Obsolete since we opened 14 years ago. Ellen has exceptional taste and style and also wants to know the history of the piece, its origins, its original use, whether it’s from France, Italy or England, if it’s from a school, a church or a public institution — as much information as you can give her she is delighted to know. Her design sense spans centuries, and a piece from the 17th century will reside with a 20th-century piece purely based on form. She has a keen eye for that, and ultimately finds the perfect place to honor the selected piece.

Ellen and I have a standing joke about uncomfortable furniture. She does want a piece to be comfortable. I don’t care about comfort. I suffer for fashion and she does not. So it’s always a bit of fun when she asks me “Is it comfortable?”

Ellen has an eye for jewels — both obvious and in the rough. She can see the potential in objects, furniture, homes and people and apply it perfectly. She has used the lighting I design in multiple properties and is also a collector of Kevin Inkawich’s botanical mobiles —that weave copper wire and seedpods — which are represented at my gallery. Ellen’s keen eye means she is a voracious collector, but what she and Portia do so well is the edit. A judicious edit makes room for new birds and ruffles the feathers of the ones that remain.

From the moment Ellen started visiting us, which was probably 15 years ago, she had already developed her own eclectic taste. She became instrumental in promoting the idea of mixing different periods and styles, which few people were doing at the time. She has always had a strong belief in what she likes and the mix she’s going for, which, when she visits us tends to be Swedish Baroque, Gustavian and Danish Modern. Whether it’s in the leather patina on a pair of mid-century chairs or the paint that’s worn off of a Baroque table exposing the wood underneath, there’s always a sense of the human touch, an honesty and soulfulness in her collecting.

Ellen is always quiet and unassuming, totally happy to walk around the shop by herself. She has a particular eye and is very knowledgeable, but she is not obsessed with pedigrees and not afraid of something anonymous and even a bit tattered with history. She’s into the beauty of the form, not the perfection of the finish. Ellen bought a set of vintage Danish chairs with rush seats from us that were not the usual style, they were much more rustic than mid-century, and I appreciate that she has that side to her aesthetic. She’s even inquired about purchasing one of the vintage factory tables on wheels that we use for display, but it turned out to be a little too large for the space she had in mind.

We worked with Ellen on her first home in Montecito and on a number of other homes over the years. She has that hunter spirit that we can really relate to. She loves to dig and search and look under things. She’s purchased many items from us over the years from early 17th- and 18th-century furniture to Native American artifacts. She’s bought both Pre-Columbian figures and modern abstract sculpture and she’s often drawn to the things that are imperfect.

Ellen purchased a grouping of Chumash steatite bowls from us. She saw them and, without knowing what they were, just fell in love. She came to visit them numerous times and just had to find the perfect place for them. She is often drawn to pieces without knowing exactly what they are and it turns out they have importance or are highly rare. But I’ve seen her fall in love with pieces many people wouldn’t even notice and then you see it in her place and it just works. Ellen has a great ability to create a vibe and relationship between the architecture and the decor. She’s also very good at mixing periods and styles — French industrial and modern furniture with classical sculpture, esoteric smalls and abstract art. She’s fearless in how she mixes things and every object in her home tells a story.

Ellen has more than good taste, she is a true connoisseur. When she chooses and places pieces, it all works. She comes to us for very specific things, mostly pared down pieces that are amazing in design. She enjoys and admires pieces that are not immediately recognizable, things that have a certain naiveté and are not ostentatious. Ellen is daring. She was very interested in the rustic woven wire sculptures of Ruth Asawa and wood furniture of Michael Wilson. She bought their work under the radar and the pieces that were rare then, have tripled and quadrupled since.

We’ve known each other for 20 years, and Ellen always had great instincts when it comes to design. She hones in on things with great personality and never trifles with things that are not substantial and meaningful. She loves and has purchased a lot of historically important 20th-century design — Jean Prouvé, Jean Royère, Serge Mouille — and also more common work by Hans Wegner and Arne Jacobsen, all things that 1stdibs offers for people who want to curate their home. She’s seen a lot, is very aware of what is going on in the market, generally ahead of and not interested in trends and always goes for the things that are exceptional. Lately, she has been exploring lesser-known designs, such as Alvar Aalto lighting and more obscure Scandinavian creators including Mogens Koch, Hans-Agne Jakobsson and Illum Wikkelsø and the French ceramicist Georges Jouve.

Ellen is one of those people who has a keen awareness of common threads in design and can see things independently of their usual origins and is sensitive to how they relate. She’s also a very practical person, so even though her references might be exotic, everything has to be comfortable and functional. She and Portia would never want anything to look too precious or live in a place that looks like it belongs in a museum. That keeps the aesthetic grounded and a little bit of humor and irony is also important. It’s not like they want to wow people with a flamboyant or pretentious design statement. Ellen just wants a stimulating environment that is embracing and comfortable.