How to Spot a Counterfeit Louis Vuitton Bag

What are the telltale signs that you're holding a real Louis Vuitton and not a knockoff? We spoke with expert Diane D’Amato to find out.
by Lisa Santandrea
Pin
Share
Tweet
Email 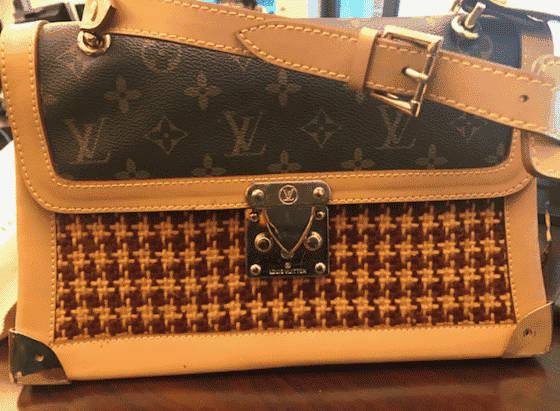 This poseur has shoddy hardware, cheap trim and a style that Louis Vuitton would never imagine — wrong in so many ways. Unfortunately, it’s not always so easy to sniff out a fake. Photo courtesy of Heritage Auctions

The ability to tell the difference between an authentic Louis Vuitton bag and one of those ubiquitous imposters “comes with time,” says Diane D’Amato, director of luxury at Heritage Auctions. For D’Amato, who spent years with Louis Vuitton before moving to Heritage, the learning curve was gradual. She describes “being surrounded by incredible product and touching it and feeling it and looking at it and, eventually, just knowing.”

But if at this very moment you have your eye on the prize (a raspberry Speedy 25 Bandoulière, perhaps?) we suspect that taking the long view is far from ideal. So as Louis Vuitton’s legal team plays whack-a-mole with fraudsters across the globe, we’ve compiled a list of features that will help you identify counterfeits and chose the first, or the next, icon for your collection. 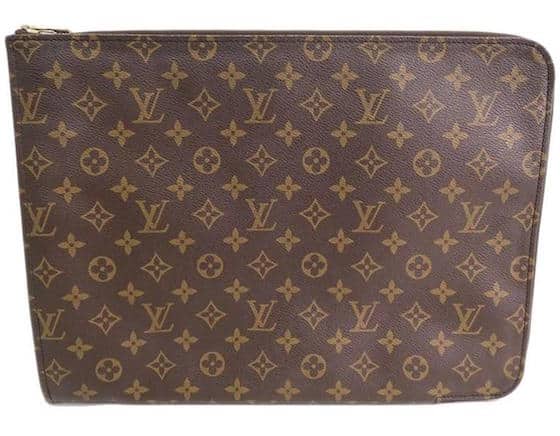 This one is the real deal, but the logos on fakes won’t look quite the same. “The colors may be off in the classic monogram, or the Damier. Because they’re not going to get the saturation and the color just perfect,” say Heritage Auction’s Diane D’Amato. Don’t overlook a slight tilt, either. Offered by Newfound Luxury

Consider the logo. First incorporated more than a century ago in the hopes of staving off counterfeits, you can be sure that Louis Vuitton takes the greatest care with its presentation. There is no tilting of the logo nor is there smudging, blurred edges or greenish tints. “The colors may be off in counterfeits,” says D’Amato, “because they’re not going to get the saturation and the color just perfect.”

However, specific styles that are made with one continuous panel of canvas (such as the Speedy) will have upside-down logos on one side. This will never occur, however, in bags is made of two pieces of canvas connected in a seam at the base, like the Neverfull Monogram. 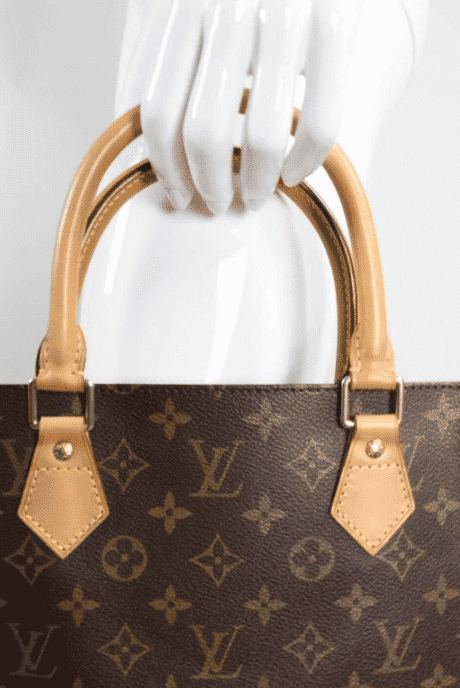 The handles and piping of Louis Vuitton bags are constructed from vachetta leather, a natural-toned cowhide that deepens to a rich honey color with age. “As soon as they’re exposed to air, they start to change color,” D’Amato explains, “that’s how the handles darken. A non-authentic bag is not going to do that in the same way as an authentic bag.” So if you’re looking at a vintage bag with bright natural handles, move on. Vuitton, founded in 1854, is not afraid of allowing the natural course of time to be reflected in its work. We should all be so confident.

Expect perfection when it comes to the stitching on a Louis Vuitton bag. Anything less won’t leave the workshop floor. And just what does perfection look like? The stitches are perfectly straight and perfectly even. The number of stitches will not change. For example, on authentic Louis Vuitton Alma, Speedy and Neverfull bags there will be five stitches across each of the tabs where the handles are secured. This is always the same; Vuitton matches the number of stitches to the location. Rule of thumb: Perfection does not deviate. 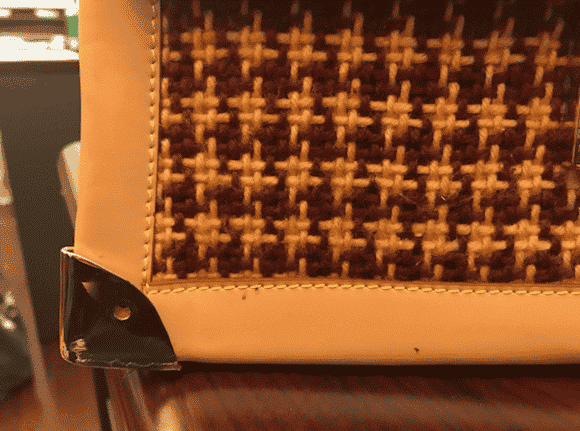 Hardware on a real Louis Vuitton would never be so slapdash. Photo courtesy of Heritage Auctions

Often on a fake Louis Vuitton, “the hardware just looks cheaper,” says D’Amato. A real luxury bag provides a pleasure of touch that a factory in China or Vietnam simply can’t reproduce. So if the hardware is flimsy, hollow or even (gasp!) plastic, the bag is a fake. Likewise, examine the LV logo stamp on the zipper pull — it should be as sharp and clear as a new $100 bill. Finally, Louis Vuitton’s hardware is usually in brass, golden brass or silvery metal (although matte finishings do exist). Whenever possible, ensure that the hardware on the bag you are considering is that of an actual Louis Vuitton bag by checking louisvuitton.com.

Although Louis Vuitton may use different linings for different collections, Monogram canvas bags are generally lined in brown cotton and Damier Ebiene Canvas bags are historically lined in red microfiber. But if you’re considering a specific bag, do your research. Pay attention to details that counterfeiters often overlook, like finding out whether a particular lining was actually used in the year a bag was produced. For example, this year, the Neverfull Monogram has a tan interior with thin brown stripes. You’ll want to know this if 30 years from now you find yourself considering a vintage 2017 Neverfull Monogram.

Finally, counterfeiters seem to believe that Louis Vuitton bags look best with brown or tan suede interiors. You’ll see these often in knockoffs. Fortunately, you’ll never see brown or tan suede lining in a real Vuitton, as the company itself has never lined its bags with either of these. It’s an easy way to identify a fake. 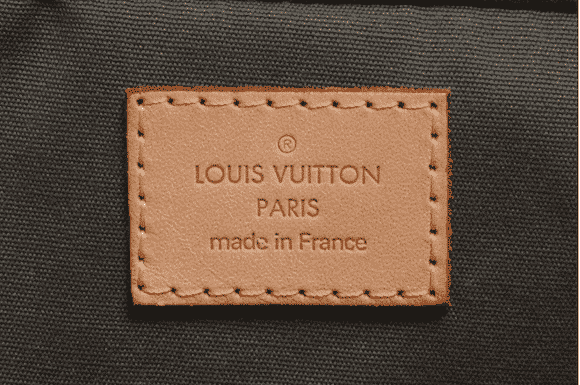 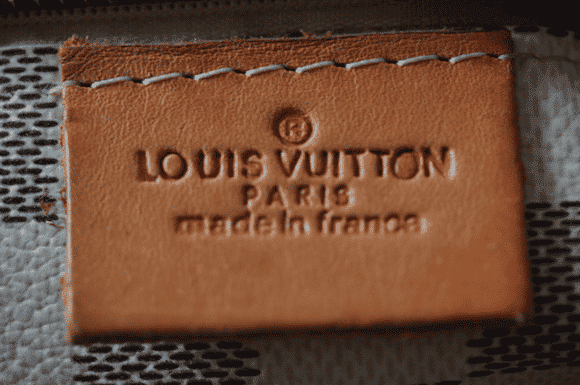 Top: an authentic Louis Vuitton stamp. Bottom: indications of fakery on this counterfeit stamp include the unfinished edges and the slightly oval letter O. Photos via Replica TelltaleStamp

Study the font Louis Vuitton uses to stamp its bags. One of the most notable details is the perfectly round and wide O. Observe, as well, that the L has an especially short tail and the two Ts in Vuitton almost touch. While counterfeiters have gotten better at reproducing the font, it’s still commonly awry — and this is a mistake you can recognize, if you’re prepared.

Also, don’t be thrown off if a bag is not made in France. Vuitton does manufacture in Spain, Germany, Italy and even the United States. 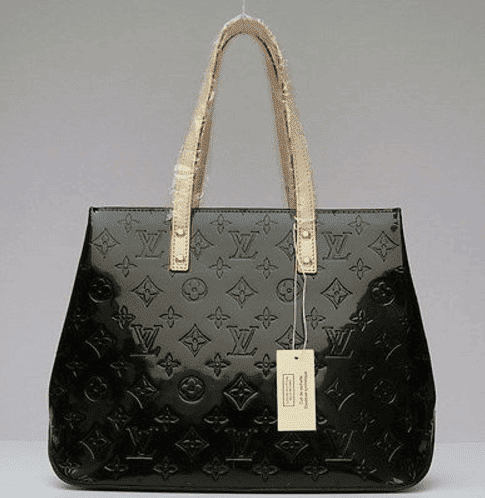 A real Louis Vuitton comes into the world unembellished. Hang tags and plastic wrap are a sign to walk away. Photo via eBay

Louis Vuitton will not wrap plastic or paper around handles or hardware in order to protect them. The company will not put hang tags on bags and it will never, ever misspell it’s own name (but you knew that).

Dust covers are extremely simple, made of 100 percent cotton with neatly finished seams. Earlier versions are light tan with an LV logo; more recently, the name has been spelled out on a pale saffron background. No other text will appear.

And don’t be swayed by a receipt, which unfortunately proves nothing. If a bag can be copied, surely a piece of paper can, as well. Alternately, a real receipt can be paired with a fake bag. 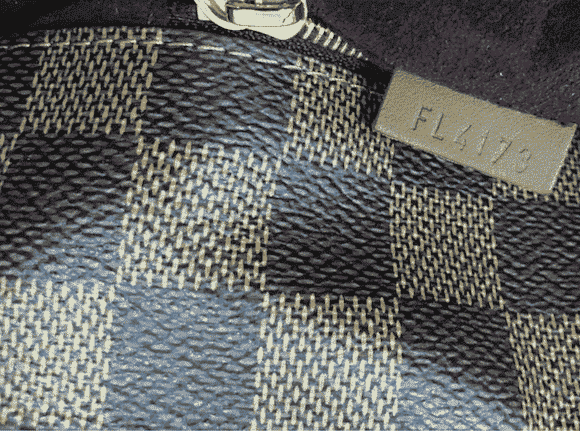 Breaking the code: made in France in November, 2013. Offered by Trendlee

In the early 1980s, Louis Vuitton began including date codes to identify a bag’s place of origin and date of manufacture. You can use the date code to cross check where a bag was produced. For example, if a bag is stamped, “Made in Germany,” the date code should include LP (see below). Anything else is careless counterfeiting. (However, even if the two do match, your search for aberrations should continue. Not all counterfeiters are sloppy.)

Date codes are found inside the bag, possibly embossed on a tag at a side seam. They can be difficult to locate and even wear away in older bags.

The following are examples and explanations of date codes and how they have evolved:

Some Final Words of Advice 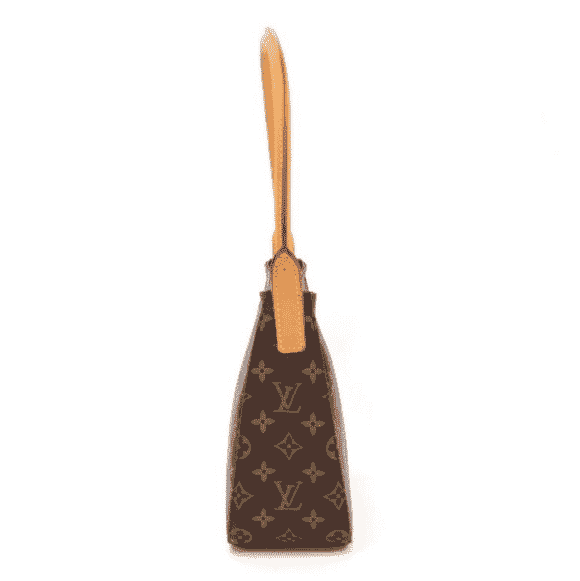 Symmetry like this is a hallmark of authenticity. Offered by fmasarovic

When buying a Louis Vuitton bag online, ask for pictures of the front, back and base as well as of the lining, the date code and the embossed stamp. Be suspicious if a seller is advertising with borrowed pictures or with ones watermarked by another site. They want your money, but they’re not willing to snap their own shots? That’s unlikely and not worth the risk.

Of course, as with online dating, false advertising does occur. So the beauty you may be admiring might not be the same one that appears at your door.

About the author: Lisa Santandrea is a New York City–based writer who teaches fashion history at Parsons School of Design.