Inside the Global-Style Venice Beach House of a Reunited Couple

Located in Southern California, a few steps from the beach, this house was designed by Tom Stringer as a place to share ideas in an atmosphere that is comfortable and sophisticated at the same time.
by Karine Monié | Photos by Jorge Gera
Pin
Share
Tweet
Email 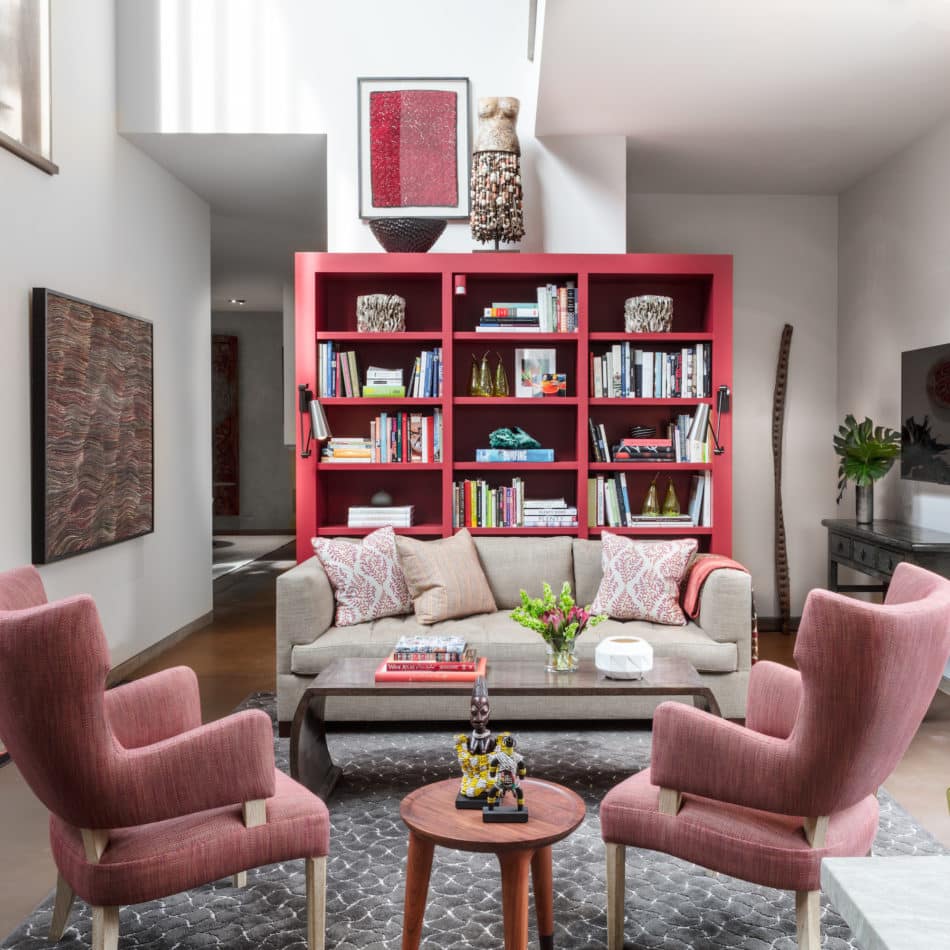 When designer Tom Stringer took on a renovation in Venice Beach, California, it wasn’t the first time he’d worked with the clients. In fact, he’s collaborated with the couple on nearly 30 projects(!) over 20 years, so he knows their style perfectly.

However, “every house has a different personality,” he says. That was perhaps especially true for this home, which the couple moved into after breaking up and getting back together.

When the couple had initially divorced, Stringer continued to work with each of them separately. Now that they have reconciled, the pair naturally enlisted their longtime friend to create a new nest. “This house needed to be neutral territory,” Stringer says. “It represents the restart of their preexisting relationship.”

The design combines objects that have been collected over the years with new pieces that tie things together. Stringer and the homeowners, who share a common passion for exotic travel, frequently embark on shopping trips to Africa and Asia.

Built in the mid-1990s, the home’s interiors feature a lot of oak paneling. “The big gesture consisted in refinishing every piece of wood and giving a more casual theme with an extra layer of sophistication,” says Stringer. “This house is much more about community than isolation,” he adds. “It was designed to be a place full of people.” 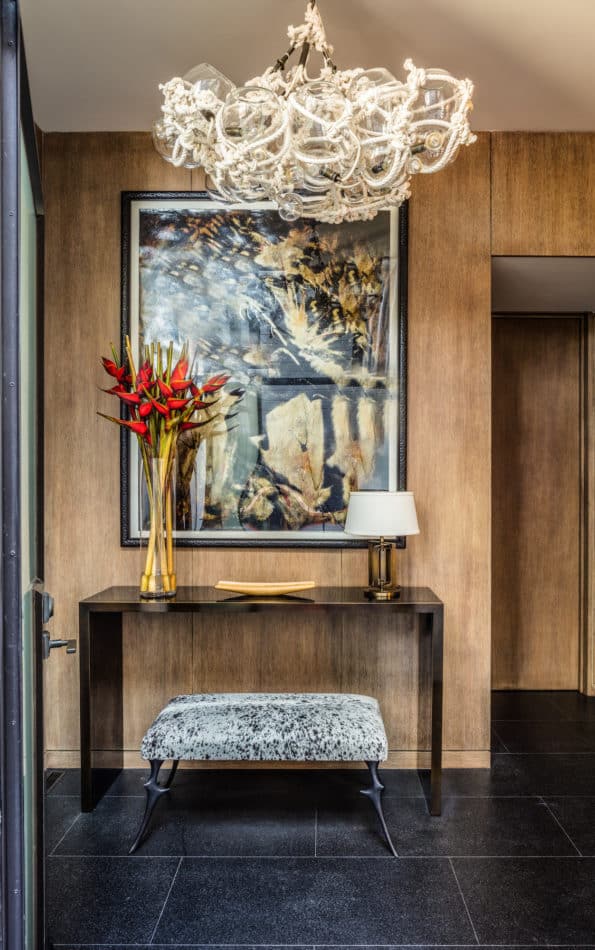 “It is a very intimate entry, a clean space that sets the tone for the house,” Stringer says. “We clearly wanted to create a sophisticated atmosphere, and I especially love the Lindsey Adelman for Roll & Hill glass and rope chandelier from 1stdibs, a reference to the beach and the sea.”

The foyer also features a Moxie mid-century modern console and a circa-1959 maple tray made by Jonny Mattsson, both purchased through 1stdibs. The table lamp is by Palmer Hargrave and the ottoman by Formations. 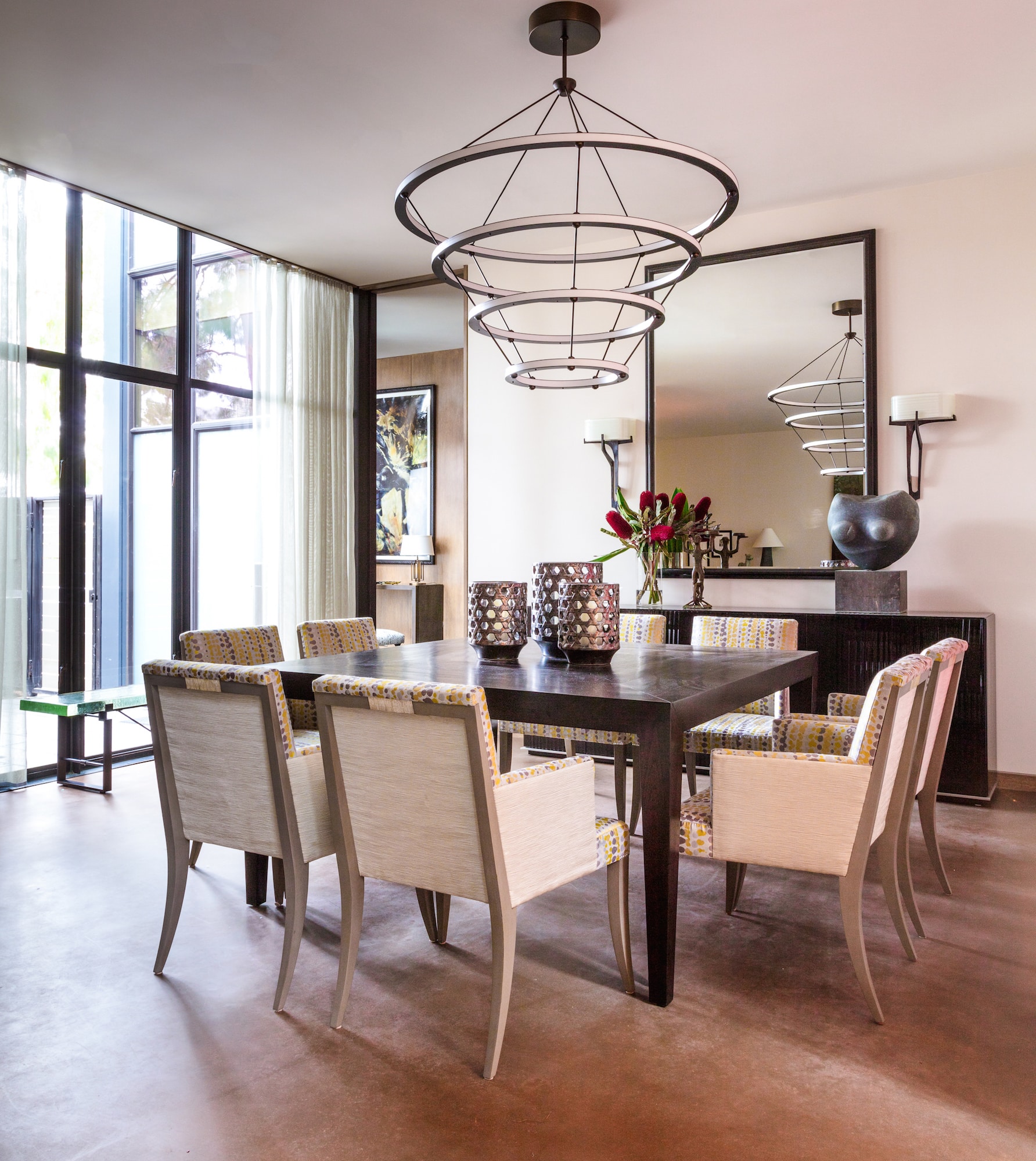 “The dining room, which opens onto a courtyard, is really part of the primary living area,” Stringer says. “The starting point was the lacquer table from Thailand.” The Chai Ming credenza by Atelier Gary Lee combines with an Armand Lee mirror surrounded by two Holly Hunt Studio sconces designed by Stefan Gulassa.

“I love the fact that the Roll & Hill chandelier occupies a huge volume of the space without feeling heavy,” Stringer adds. The Baker dining chairs and the Alison Berger glass bench complement the look of this casual area. “The owners are avid foodies but they are not formal,” Stringer says. 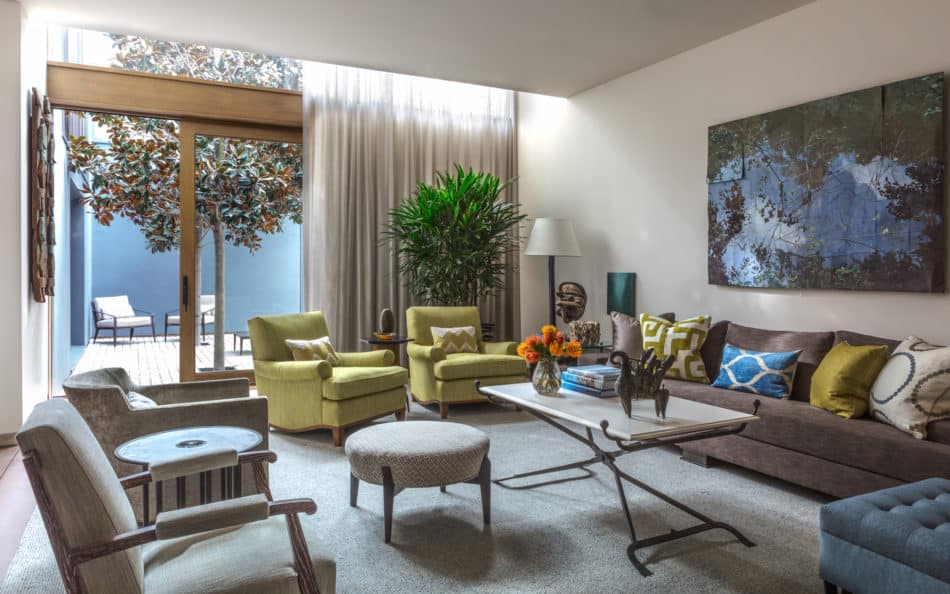 “The female owner is heavily involved in her community, so we envisioned this space as a grand salon with a lot of chairs to receive guests,” Stringer explains. “The living room is really designed as a place for conversation.”

Stringer and his clients collected several African objects during safaris. Next to the Christian Liaigre sofa, a pair of green lounge chairs by Jonas adds a touch of color. The wood frame chair is also by Jonas, and the ottoman by Dessin Fournir. The Dennis & Leen cocktail table has a Capri limestone top and the Formations round side table has a bronze top with spool base.

Both the 1970s Karl Springer end table from Lobel Modern (featuring a hand-carved authentic African table base with custom bronze fittings and a glass top) and the 1950s Jens Risom sideboard from Machine Age (in walnut wood with a travertine top and leather paneled doors) were purchased on 1stdibs. 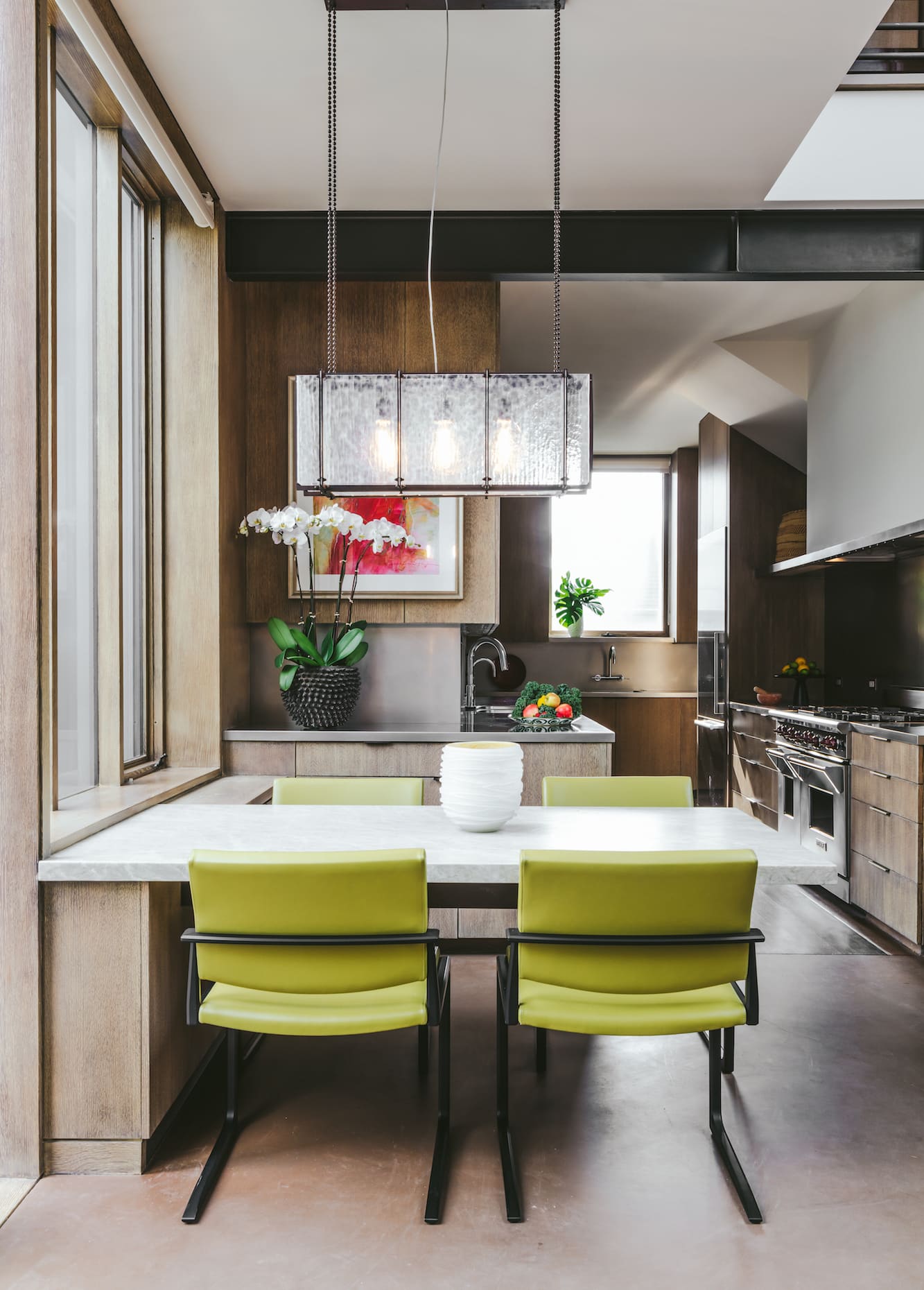 “The kitchen was in great shape,” says Stringer. “We created the cantilevered dining table in order to save space and imagined this kind of light box above it. Covered in green Edelman leather, the Holly Hunt Studio chairs make you feel happy. It is a very simple, big-scale kitchen, which I really love for its efficiency.” 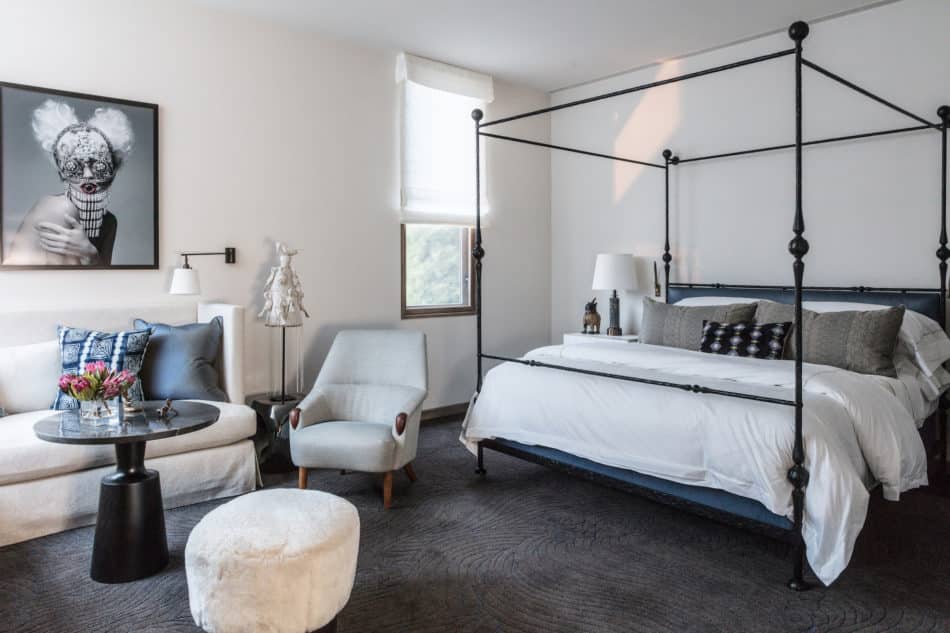 “The master bedroom is an intimate getaway, a retreat with a cozy sitting area,” Stringer notes. “The Merida rug makes you feel like you are walking on a volcanic beach.”

The room features several pieces sourced from 1stdibs, including the Swedish antique cabinet, the pair of alabaster and brass bedside commodes, the Paul Marra mineral core lamps and the Danish–inspired lounge chair attributed to Johannes Andersen. The four-poster bed is by Dessin Fournir. Hanging above the sofa by Tom Stringer Design Partners is a provocative photograph by Paco Peregrín. 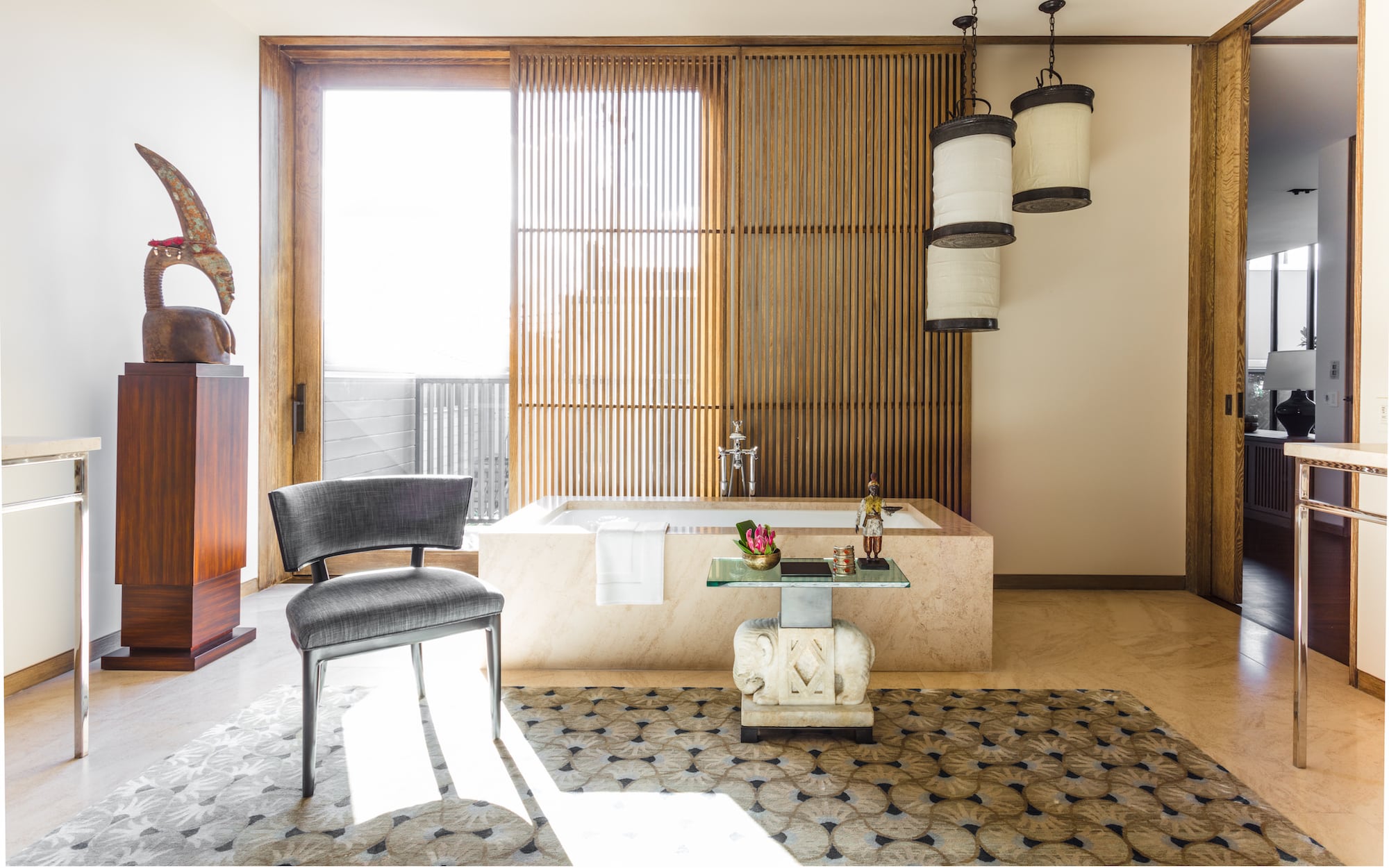 Filled with natural light, the master bath features African and Asian-inspired objects such as the Vaughan Indian lanterns, the Baga sculpture on the Global Views pedestal and the Blackman Cruz elephant table fashioned from an antique 19th century Indian marble elephant. A chair by A. Rudin sits on a hand-knotted wool and silk rug from Shiir.