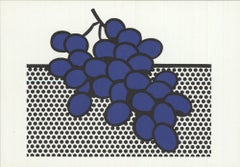 H 25.13 in. W 26.13 in.
Mermaid, from Surrealist Series
By Roy Lichtenstein
Located in Miami, FL
Created in conjunction with Roy Lichtenstein's first commissioned public sculpture project for the Miami Beach Theater of the Performing Arts. The print image echoes that of the scu...
Category

H 24 in. W 24 in.
Imperfect Diptych 46 1/4’’ x 91 3/8’’, from: Imperfect Series
By Roy Lichtenstein
Located in London, GB
Woodcut and Screenprint with collage in colours, 1988, on Archivart 4-ply Museum Board, signed and dated in pencil, numbered from the edition, printed & published by Gemini G.E.L., L...
Category

H 35 in. W 48 in.
STILL LIFE WITH LOBSTER
By Roy Lichtenstein
Located in Aventura, FL
Hand signed, dated and numbered by the artist. From the Six Still Lifes Series. Lithograph and screenprint on rives BFK paper. Co-published by Multiples, Inc. and Castelli Graphics, ...
Category

H 38.625 in. W 37.4375 in.
Mirror #6 (from Mirror Series), 1972
By Roy Lichtenstein
Located in Saugatuck, MI
A very rare Roy Lichtenstein limited edition artist proof hand-signed and numbered linocut and screen print inscribed "To Leo" as in Leo Castelli. The work was later purchased by Ge...
Category

H 4.25 in. W 6 in. D 0.1 in.
Finger Pointing -- Screen Print, Human Hand, Pop Art by Roy Lichtenstein
By Roy Lichtenstein
Located in London, GB
ROY LICHTENSTEIN Finger Pointing, 1973 Screenprint in colours, on wove With the artist's copyright inkstamp verso Numbered from the edition of 300 From The New York Collection for S...
Category

H 11.93 in. W 8.98 in.
Finger Pointing -- Screen Print, Human Hand, Pop Art by Roy Lichtenstein
By Roy Lichtenstein
Located in London, GB
ROY LICHTENSTEIN Finger Pointing, 1973 Screenprint in colours, on wove With the artist's copyright inkstamp verso Numbered from the edition of 300 From The New York Collection for S...
Category

H 26.5 in. W 36.5 in.
Still LIfe with Lobster
By Roy Lichtenstein
Located in Miami, FL
From the Six Still Lifes Series created in 1974, this work is part of six works created by the artist in 1974 in coordination with Castelli Graphics, NY. It is a classic still life ...
Category

H 30 in. W 40 in. D 1 in.
Nude On a Beach
By Roy Lichtenstein
Located in Miami, FL
TECHNICAL INFORMATION Roy Lichtenstein Nude On Beach 1978 Lithograph on Arches paper 25 3/4 x 24 1/2 in. Edition of 38 Pencil signed, dated and numbered Accompanied with COA b...
Category

Roy Lichtenstein
Nude On a Beach, 1978

H 24 in. W 17.75 in. D 0.75 in.
Nude on Beach, from Surrealist Series
By Roy Lichtenstein
Located in Miami, FL
From the &quot;Surrealist&quot; series, 1978. Hand signed rf Lichtenstein, dated ('78) and numbered in pencil, lower right. Six colors, in six runs, five from aluminum plates and one...
Category

Lichtenstein 1970 For Sale on 1stDibs

You are likely to find exactly the lichtenstein 1970 you’re looking for on 1stDibs, as there is a broad range for sale. Find Contemporary versions now, or shop for Contemporary creations for a more modern example of these cherished works. If you’re looking for a lichtenstein 1970 from a specific time period, our collection is diverse and broad-ranging, and you’ll find at least one that dates back to the 20th Century while another version may have been produced as recently as the 20th Century. When looking for the right lichtenstein 1970 for your space, you can search on 1stDibs by color — popular works were created in bold and neutral palettes with elements of beige, gray, white and red. A lichtenstein 1970 from Roy Lichtenstein and Horst P. Horst — each of whom created distinctive versions of this kind of work — is worth considering. Frequently made by artists working in lithograph, screen print and offset print, these artworks are unique and have attracted attention over the years.