Gucci Leather and Chrome Bottle Opener Vintage Barware
By Gucci
Located in North Miami, FL
This handsome Italian Gucci bottle opener is vintage from the 1970s. It is black leather and chrome-plated. This is great barware. It is marked Gucci, Italy. This would make a great ...
Category

Vintage Gucci Highball Glassware w/ Silver Plate Bases, Set of Four '4'
By Gucci
Located in East Hampton, NY
This wonderfully preserved set of 4 Gucci ITALY tall glasses with Silver plate base caps. Each is marked with Gucci stamp in addition to the Gucci logo and chain design on the glass ...
Category

Mid-20th Century Wine Cooler by Gucci, circa 1970
By Gucci
Located in London, GB
Mid-20th century wine and champagne cooler by Gucci. This design is very much in the Gucci tradition, made in silver plate with applied rope & gilded mounts decoration, the interior...
Category

Rare and Vintage Ice Bucket by Gucci, 1970s
By Gucci
Located in Los Angeles, CA
Very rare ice bucket signed on the bottom by Gucci. The ice bucket is made whit silver and glass and the conditions are vintage.
Category

Vintage and Unique Gucci Wine or Water Cooler, Italy, 1970s
By Gucci
Located in Los Angeles, CA
Stunning Gucci wine or water cooler in leather and chrome. The cooler is in vintage condition and is signed on the side "GUCCI MADE IN ITALY". Perfect for giving a vintage touch to...
Category

Gucci Silver Plated Bottle Opener, Jockey's CAP, Italy, circa 1970
By Gucci
Located in Bath, GB
A fine vintage novelty bottle opener in the form of a Jockey's CAP made by Gucci, Italy, signed on the underside. Excellent quality and condition having been through our silversmi...
Category

Gucci Leather Pitcher
By Gucci
Located in New York, NY
A finely made drink pitcher by Gucci, in a silver plate & leather finish. This will be the perfect accent to any bar set up. Marked at bottom edge.
Category 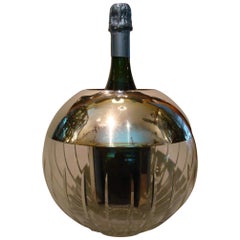 Pair of Art Deco Candlesticks Made of Italian Silver, circa 1920s

H 7 in. Dm 2 in.
Vintage Gucci Crystal Decanter
By Gucci
Located in Lambertville, NJ
A 1960s Gucci crystal decanter with gilt logo mount. The water clear European crystal with the original round stopper with a double band mount with Gucci logo. The bottle form with p...
Category

H 12 in. Dm 4.5 in.
Gucci Signed Silver-Plate Dog Head Bottle Opener Vintage Italian Barware
By Gucci
Located in North Miami, FL
This delightful vintage Italian signed Gucci dog head bottle opener is from the 1970s. It is silver-plate. This one in particular is more desirable than other animals. The face is so...
Category

H 3 in. W 2.5 in. D 3 in.
Gucci Horse Bit Decanter Set Barware 2pc Tall Pitcher and Cocktail Glass, 1970s
By Gucci
Located in Los Angeles, CA
Entertain in style with this vintage barware set from Gucci, likely made in the 1970s. This fabulous set includes a tall glass decanter or pitcher and one matching cocktail glass wit...
Category

H 2.4 in. Dm 3.8 in.
Luxury Vintage Gucci Ice Bucket, 1970
By Gucci
Located in Munich, DE
Luxury vintage Gucci ice bucket in chrome and brass with and plastic inlay and marked with the golden Gucci sign from the 1970s and on the bottom.
Category

H 9.85 in. Dm 7.88 in.
Gucci Martini Pitcher Barware Vintage
By Gucci
Located in North Miami, FL
This Italian hallmarked Gucci martini pitcher is from the 1970s. It is silver plate and glass. It is marked Gucci Marked in Italy. It is so chic. Great barware.
Category

Gucci Barware for sale on 1stDibs.

Gucci Barware is available for sale on 1stDibs. These distinctive objects are frequently made of metal and designed with extraordinary care. There are many options in our Gucci Barware collection, although silver editions of this piece are particularly popular. We stock 14 vintage versions of these items, while there is 0 modern edition to choose from as well. Many of the original Gucci barware were created in Italy during the 20th century in the modern style of the mid-century. Many customers also consider Barware by Piero Fornasetti, Fornasetti and Mauro Manetti if you are looking for additional options. Prices for Gucci Barware can vary depending on size, time period and other attributes. The price for these items starts at $470 and tops out at $6,000, while pieces like these can sell for $1,250 on average..