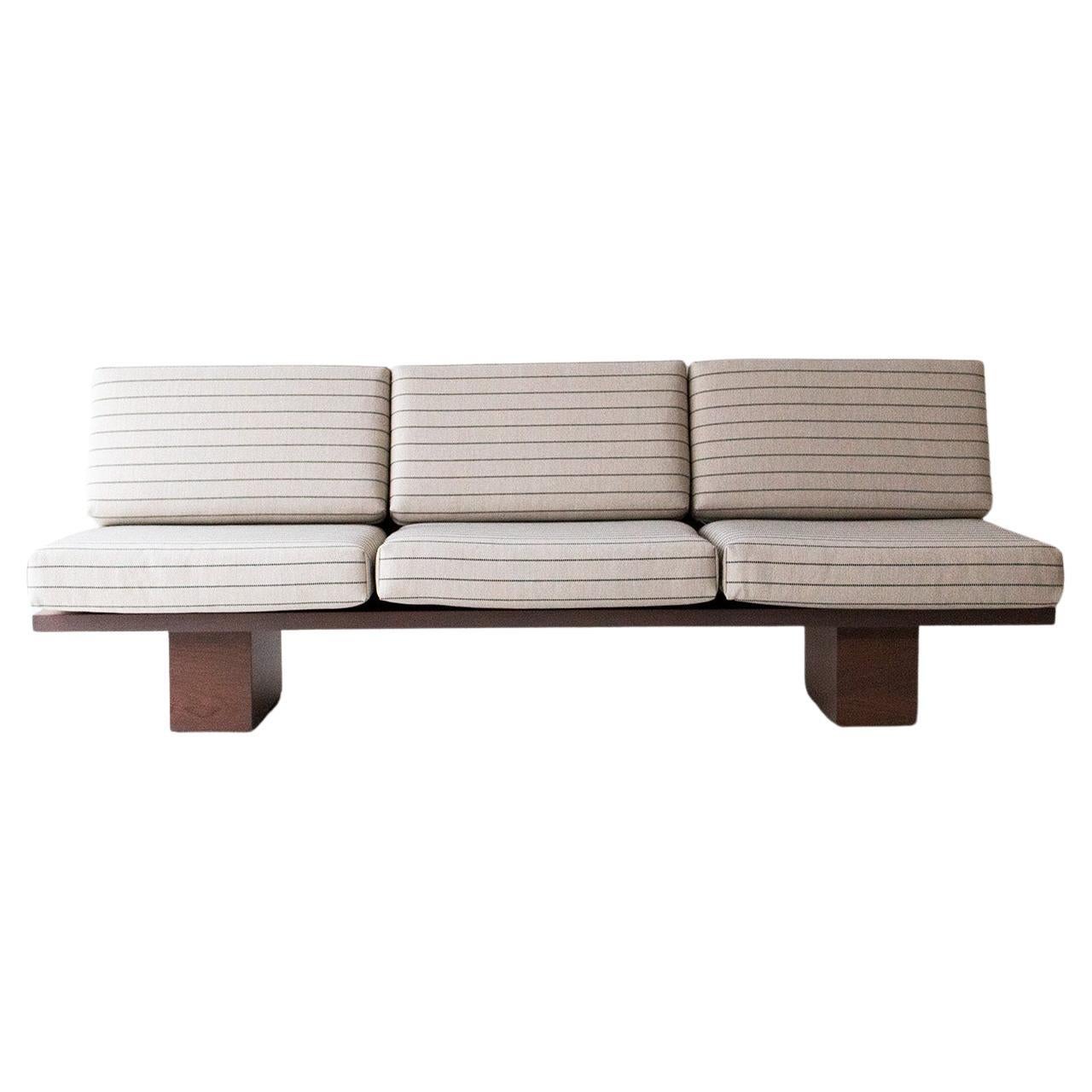 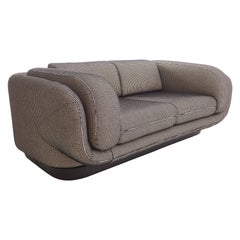 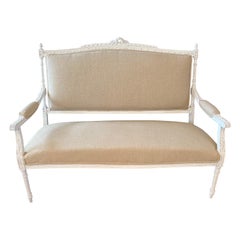 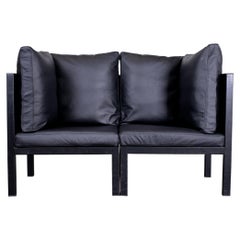 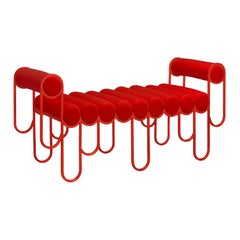 Loveseat in Alpaca Velvet by Maharam, France, circa 1880

Stunning Custom Designed Round Ottoman with Stainless Steel Base
By Cain Modern
Located in Los Angeles, CA
Beautiful round loveseat/ottoman with upholstered top. This beautiful ottoman can be used indoors or outdoors, it is perfect for homes with large living or family rooms, ideal for e...
Category

Stunning Custom Designed Round Ottoman with Stainless Steel Base

Minimalist Outdoor Lounge Chair, Brazilian Design
By SIMONINI
Located in Vila Cordeiro, São Paulo
This outdoor lounge chair or armchair, the multi-finish structure is combined with outdoor fabrics such as the Batyline to create an interesting outdoor solution. Bellow the full Sky...
Category

Santa Rosa Bench in Walnut
By Greg Mitchell
Located in Los Angeles, CA
The Santa Rosa bench is a simple piece of seating for the well appointed interior. Its clean lines, hand turned base, and wedged through tenons amount to a design that is at home in ...
Category

Santa Rosa Bench in White Oak
By Greg Mitchell
Located in Los Angeles, CA
The Santa Rosa bench is a simple piece of seating for the well appointed interior. Its clean lines, hand turned base, and wedged through tenons amount to a design that is at home in ...
Category

Studio Stirling Twin Deal Ochre Soft Leather Sling, Free Shipping
By Joanina and David Pastoll
Located in Johannesburg, ZA
Stripped away from all excess, this hanging chair has a circular frame with the sheets of soft leather hanging loose within it, to create a sleek, sexy, and oh so comfortable experie...
Category

Tranquilo Loveseat in White Oak with Spindle Back
By Greg Mitchell
Located in Los Angeles, CA
Everyone knows the love seat is nothing more than a glorified bench, or a miniature couch, but the fact is it's often a necessary item for city dwellers who lack the room for a secti...
Category

Tranquilo Loveseat in White Oak with Spindle Back

Midcentury Modern Pink Velvet and Brass Majestic Bench Handcrafted and Custom
By Montse Piquer
Located in Madrid, ES
Hold on to your seats, curves ahead. Its bold, curved silhouette is reminiscent of the beauty of a Portuguese autumn, evoking feelings of warmth and coziness. Majestic bench's design...
Category

Modern Leather Lounge Chair with Handcrafted African Design
By Joanina and David Pastoll
Located in Johannesburg, ZA
This functional art piece was designed in collaboration with Tsepo Makate - South African artist and illustrator – who did the beautiful illustration. Enquire about the range of draw...
Category

Fuyu Armchair
By LAGU
Located in İSTANBUL, TR
With its unique design, FUYU armchair brings together the wide seating and naturalness that you cannot find in other single sofas… Measures: Length: 47.2'' / Depth: 53.2'' / Height:...
Category

Emilio Sala and Giorgio Madini, Sofa with Tapered Wooden Legs Italy, in the 1950

Danish 1940s Curved Sofa or Loveseat in Red Mohair
By Viggo Boesen, Slagelse Mobelvaerk
Located in Bridgeport, CT
Beautiful and very elegant 1940s curved sofa/loveseat in red mohair wool fabric. The sofa has springs in the seat and the backrest and the cushions are nice and firm and the sofa ver...
Category

Hollywood Regency Glam Curved Newly Upholstered Settee Loveseat
Located in Hopewell, NJ
A mid century settee updated in new, crisp cotton duck upholstery. The lines of the loveseat are lovely, having a curved frame that is decorated with antique French nailheads around ...
Category

Vintage Brown Leather Loveseat and Pair of Arm Chairs, Set of 3 from Denmark
Located in Round Top, TX
This handsome loveseat and pair of arm chairs are a great find for one searching for an authentic vintage leather set. The rich brown leather is perfectly patina'd from years of use ...
Category

Vintage Brown Leather Loveseat and Pair of Arm Chairs, Set of 3 from Denmark

Danish Ca. 1950 Curved Sofa in Green Mohair and Brass Capped Legs
Located in Bridgeport, CT
Beautiful and very elegant late 1940s to early 1950's curved three-seat sofa in green mohair wool fabric. The sofa has springs in the seat and the backrest and the cushions are nice ...
Category

Sofa with Blue Mohair And Polished Brass Legs
By Troy Smith Studio
Located in Toronto, Ontario
The Flute Sofa's design is contemporary and functional with excellent proportions and scale. The sofa is made by hand and designed by Troy Smith Studio. This sofa is a statement ma...
Category

Antique and vintage loveseats are functional and totally charming furniture in homes large and small these days. They first appeared in the 17th and 18th centuries, though they were not yet known by this endearing term.

These petite, two-seat sofas were originally intended to comfortably sit a woman clad in what were the era’s large and elaborate dresses — ornate hooped garments with copious folds of fabric, embroidery and lace. However, because the original seats featured just enough space for two, they quickly became popular for couples that were courting. Loveseats meant that the couples could engage in close conversation, but furniture makers ensured that there was enough space between sitters to prioritize modesty.

In the early days of loveseats, the furnishings were minimalist in appearance and could often be found in an s-shape, with the two sides facing each other. The spare seating was initially little more than a wooden bench, as loveseats weren’t yet upholstered or cushioned. Design of the seating evolved over time, and this wide chair was eventually padded and tufted for comfort. During the 1800s, loveseats were a luxurious addition to the homes of the wealthy, and even today, antique 19th-century loveseats are still quite alluring. In any lavishly decorated parlor of the Victorian era, you might find a pair of partygoers tucked into a particularly plush iteration of these cozy perches, one boasting arched crests of carved mahogany over its sculpted seats, with front cabriole legs resolving in paw feet.

In modern homes, loveseats — even antique Victorian loveseats — pair well with oversize sofas or are ideal replacements for sofas, particularly if you’re working on organizing and furnishing a smaller space. A loveseat is a stylish addition to a home library or a reading nook and can easily be situated at the foot of the bed in your bedroom. In the living room, you may wish to position your vintage loveseat and couch around a central focal point, such as a distinguishing architectural feature or a fireplace. But be sure to leave some walking room between your seating and any nearby coffee tables or side tables. Allow for around two feet for guests to pass between a couch and chair or loveseat and at least a foot between a loveseat and coffee table.

Find a wide variety of antique, new and vintage loveseats today on 1stDibs.