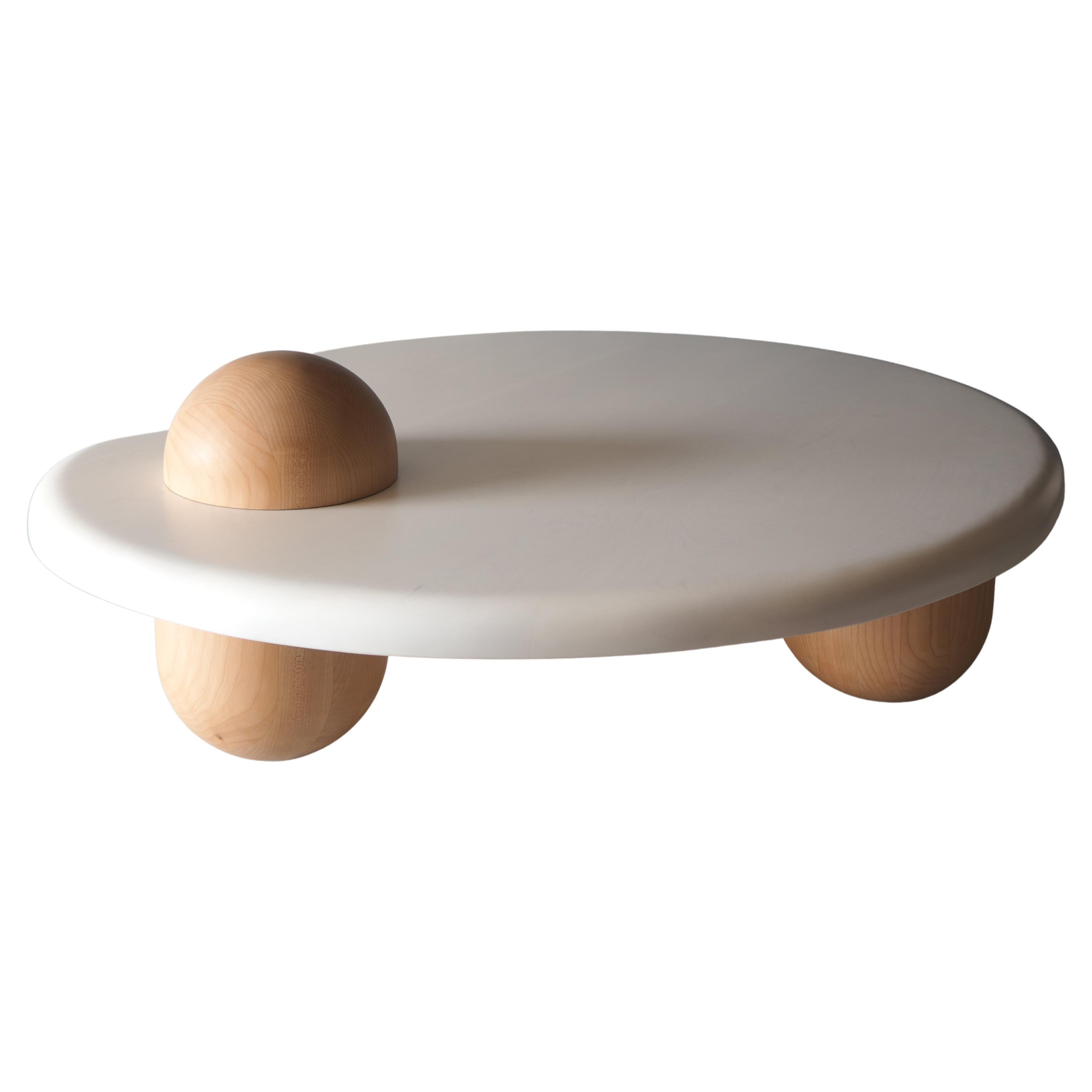 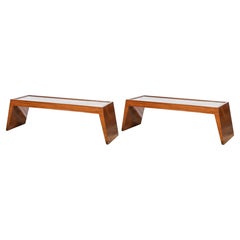 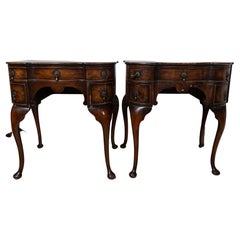 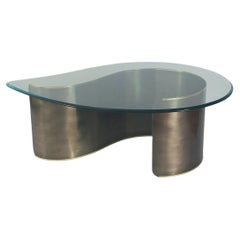 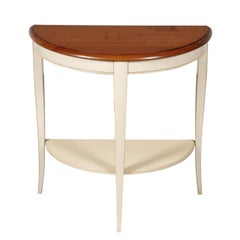 Half Moon Cherry Console, Betweenleg Shelf, White-Cream Lacquered, Stained Top
Located in Landivy, FR
This French Console's design is in a campaign style also called "Campagne Chic". It is made of solid French cherry. This Console's classical finish is made with white-cream lacqu...
Category

French Modern Steel, Brass and Glass Low Table in the Style of Royere
By Jean Royère
Located in Hollywood, FL
The circular top above a steel frame with three legs accented by brass stars and spheres-can accommodate glass top up to 42" easily and possibly larger.
Category

French Modern Steel, Brass and Glass Low Table in the Style of Royere

Directoire Style Console Table in Cherry with a Secret Drawer Made in France
Located in Landivy, FR
This rectangular console table is a craft handed re-interpretation of the French Directoire style at the end of the 18th century. The Directoire period style is remarkable with its ...
Category

Mid-Century Directional Coffee Table
By Directional
Located in Los Angeles, CA
An extraordinary modern coffee table is made out of solid wood and veneers professionally restored by our team of expert craftsmen. This table has a large rectangular top shape cover...
Category

Italian Postmodern Smaller Scale Marble and Glass Square Cocktail Table
Located in Philadelphia, PA
This cocktail table is so architectural and modern, made in Italy, circa 1990s. It’s constructed of thick slabs of marble and clear glass. Very clean and ready for immediate use.
Category

Palette Coffee Table by MSJ Furniture Studio
Located in Vancouver, BC
Our Palette coffee table was not designed to be used as a palette but feel free to use as you wish. The Solid maple legs are hand turned in our studio in Vancouver. The table tops wh...
Category

French 19th Century Oak Server
Located in Baton Rouge, LA
This provincial low table has a beautiful patina top, made from two planks of solid oak nailed together to form a narrow surface. Housed in the apron are three drawers of two differe...
Category

18th Century English Walnut Lowboy
Located in Lymington, GB
An English mid-18th century walnut lowboy. George II period, circa 1750. Of excellent color and patina. Nb. This mid-Georgian walnut lowboy may also be referred to as a side table, ...
Category

Palette Coffee Table by MSJ Furniture Studio
Located in Vancouver, BC
Our Palette coffee table was not designed to be used as a palette but feel free to use as you wish. The Solid maple legs are hand turned in our studio in Vancouver. The table tops wh...
Category

Wood and Parchment Low Round Table by Comte, Argentina, Buenos Aires, circa 1950

French Countryside Console Table in Cherry, 100% Made in France

18th Century Chinoiserie Lowboy
Located in High Point, NC
18th century English lowboy hand decorated with chinoiserie decoration. It is from the Georgian period and has a gloriously hand painted decorated top with a banded edge and a centr...
Category

Hexagonal Pouf in Soft White Boucle with Wooden Base, Italy
Located in London, GB
A hexagonal pouf with white boucle seat and a wood base. Great occasional seating but solid to use as a low table as well. A contemporary item, highly decorative and versatile Italy.
Category

Hexagonal Pouf in Soft White Boucle with Wooden Base, Italy

Contemporary French Oak Console, One Drawer Disguised as Three and One Shelf
By Christophe Lecomte
Located in Landivy, FR
This Modern Console was designed by Christophe Lecomte. It is made of Solid French Oak. The sourcing of the solid wood comes from sustainably managed French forests. This console ...
Category

Contemporary French Oak Console, One Drawer Disguised as Three and One Shelf

Tables and chests that are low in height are known as lowboys. Vintage, new and antique lowboys are versatile furniture pieces, serving as coffee and cocktail tables, end tables, chests and nightstands.

With their compact size, lowboys can be utilized in entryways, living rooms, dining rooms and studies as well as boudoirs and bathrooms.

A tallboy, on the other hand, might include a wardrobe on top of a set of drawers, while a highboy is usually a simple tall chest of drawers. (If you’re interested in vintage case pieces, we’ve got a guide for that.)

Lowboys became popular as dressing tables in the 18th century in England and America. Chippendale lowboys reflect this heritage, while other antique lowboys have vintage charm. Mid-century modern lowboys often channel the clean lines that we’ve come to associate with furniture in that style.

Lowboys are a design staple because of their adaptability to a variety of spaces. For a project in ​​Portland, Oregon, interior designer Jessica Helgerson featured a Terranova lowboy coffee table among Tudor decor, while designer Charles de Lisle’s California style regularly incorporates cocktail tables and other lowboys as part of a welcoming but sophisticated aesthetic.

Shop 1stDibs for lowboys of all types including chests, consoles, coffee tables and cocktail tables.