The Comprehensive Guide to Case Pieces 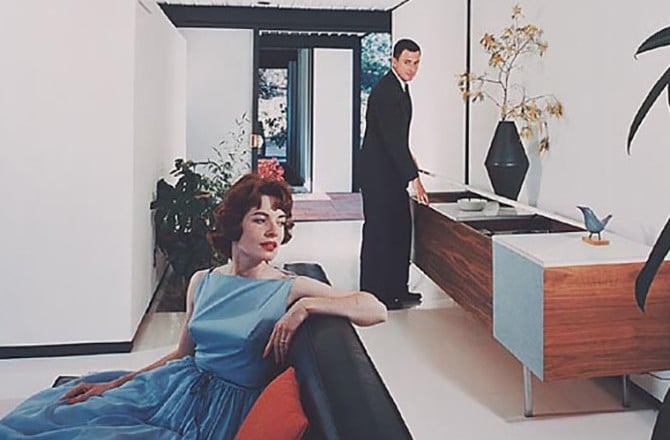 One would be hard pressed to find a home, flat or even a studio apartment without a case piece within. Though the terms “case pieces” and “case goods” may cause even the most décor-obsessed to stumble, these furnishings have been a vital part of the home for centuries. Simply put, consider any furnishing that is non-upholstered and has some semblance of a storage component may be properly termed a case piece.

The term originated in Le Garde-meuble, ancien et moderne — or the Furniture Repository, ancient and modern — a Parisian, bimonthly periodical that served as the interior design resource from 1839 to 1935. Leave it to the French to single-handedly define au courant furniture design for Europeans and wealthy Americans eager for an infusion of Gallic sensibility. A defining line was first drawn between seating and case pieces in pre-Revolutionary France, when guilds ruled furniture design and manufacturing. Chairs were strictly made by carpenters (menuisiers) and case pieces by cabinetmakers (ébénistes).

In the mid-19th-century, cabinetmakers were most occupied crafting dressers, chests, tables and bookshelves. They looked to the past to give their contemporary customers exactly what they wanted, drawing upon styles seen in royal households of the 16th-, 17th- and 18th-centuries. This period coincided with the beginning of the Industrial Revolution, and cabinetmakers were able to appease their clients by making elaborate pieces at scale. They would mimic styles seen in the Louis XIV, Louis XV and Louis XVI eras by utilizing machines such as the newly invented steam-driven saw (for cutting veneers more evenly and efficiently). After cutting out rough forms with machinery, cabinetmakers would finish off each piece with hand carving. Thus, they were able to make, say, an elaborate Louis XV-style piece at a quicker clip.

The definition of a case piece hasn’t changed since the days Le Garde-meuble was in circulation (annual subscriptions could be had for 22 and a half Francs — about $83), but aesthetically the 21st-century has proved that most anything goes. To this end, we’ve provided a glossary of some of the various categories that fit within the case piece parameters on 1stdibs. If there’s one thing that rings true across the centuries, it is that everyone (nobleman and modern city dweller alike) can always do with a bit more storage. 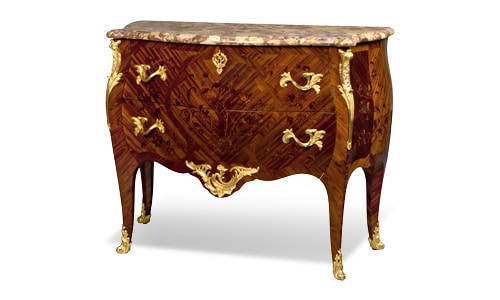 Commodes or Chests of Drawers: The distinction between the two is merely linguistic — commode is the French term for a chest of drawers, but is also sometimes used to denote a piece with a particularly intricate design. The commode dates to circa 1700 France, where it was used as an alternative to a taller cabinet piece so as to not obscure paneled, mirrored or tapestried walls. 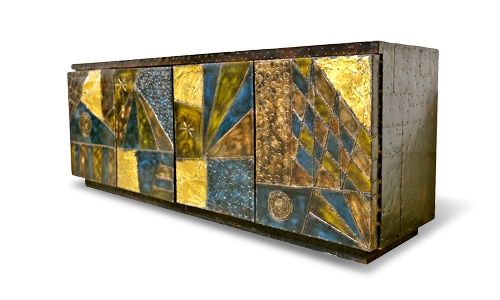 Cabinets: The technical definition of a cabinet is fairly obvious: a set of drawers, fronted by at least one door and intended for storage. FYI, a cabinet is distinct from a cupboard in that it has drawers and/or pigeonholes; a cupboard merely has simple shelves. Cabinets originated in 16th-century Italy, but reached the height of their popularity in Louis XIV-era France and Restoration England. During that time, the word “cabinetmaker” was synonymous with “really good at making furniture.” 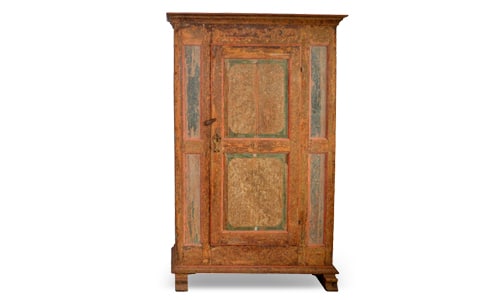 Cupboards: A general term for a closed, shelved structure used to hold all manner of goods. 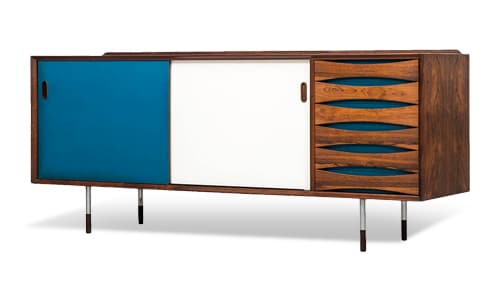 Sideboards and Credenzas: A sideboard is a side-table with cabinet doors that is used for serving, most often in a dining room. In form, a credenza has much in common with a sideboard. The origin of the word credenza comes from the Italian term for the cabinet or side table used in church services. 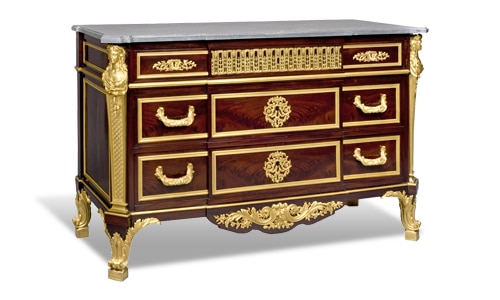 Dressers: Technically speaking, a dresser is not distinct from a chest-of-drawers. That said, it’s typically used to connote a chest-of-drawers that is used primarily to store clothing. This is a funny misnomer, as the word comes from the 14th-century French term dresseur, or, a table on which to prepare food. 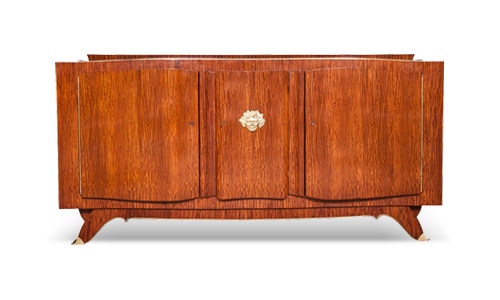 Buffets: Though often used as a synonym for “sideboard,” a buffet technically possesses a tiered or shelved superstructure for displaying decorative kitchenware. The term derives from buffet à deux corps, a piece which is seen mostly in French Provincial furniture. 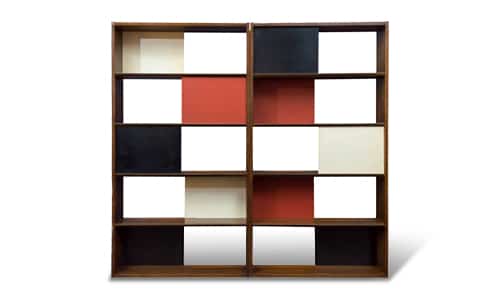 Bookcases: You probably know this one, but a bookcase is a set of shelves — either standalone or within a cupboard — used for storing books. The first known evidence of a bookcase? An etching within an 8th-century Latin text entitled Codex Amiatinus. 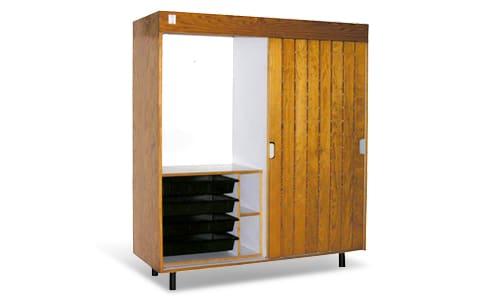 Wardrobes and Armoires: A closed, free-standing cupboard, often of monumental scale, used to hold clothing, books, kitchenware and more. Armoire is the French term, and stems from the fact that these pieces were originally used to hold armor and weapons. The 1835 innovation of using silver and platinum for mirrors (rather than mercury) allowed cabinetmakers to add inset mirrors into armoire doors. The result? Armoires that could double as a standalone closet and place to admire one’s own reflection. 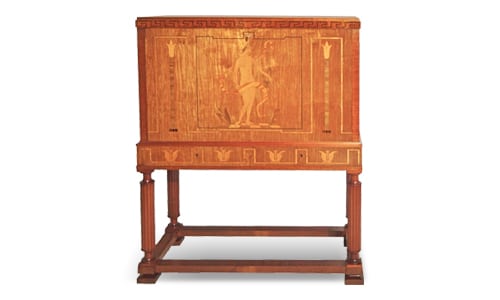 Secretaires: Another vocab word that comes via France. A secretaire is a free-standing writing desk with a fall-front that may be left open or closed. When open, this piece serves as the writing surface. 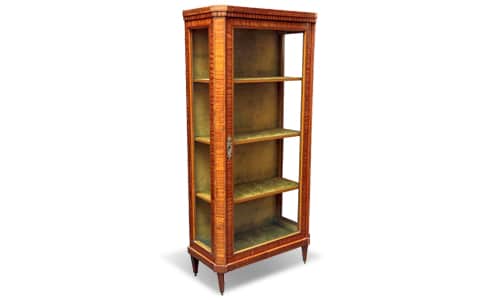 Vitrines: A cabinet with glass doors, or glass doors and walls, that is primarily used for the display of smaller objects. 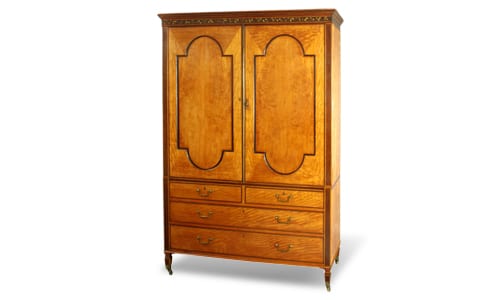 Linen Presses: A British term used to describe a cupboard used for the storage of linens. Linen presses gained popularity in the 17th-century, are typically about 48-inches wide, making them approximately as wide as an armoire. The upper section behind the cabinet doors has very wide, open shelving, not drawers. This makes it easier for a large tablecloth or bed sheet to be folded as little as possible, reducing the number of wrinkles to be ironed out prior to use.