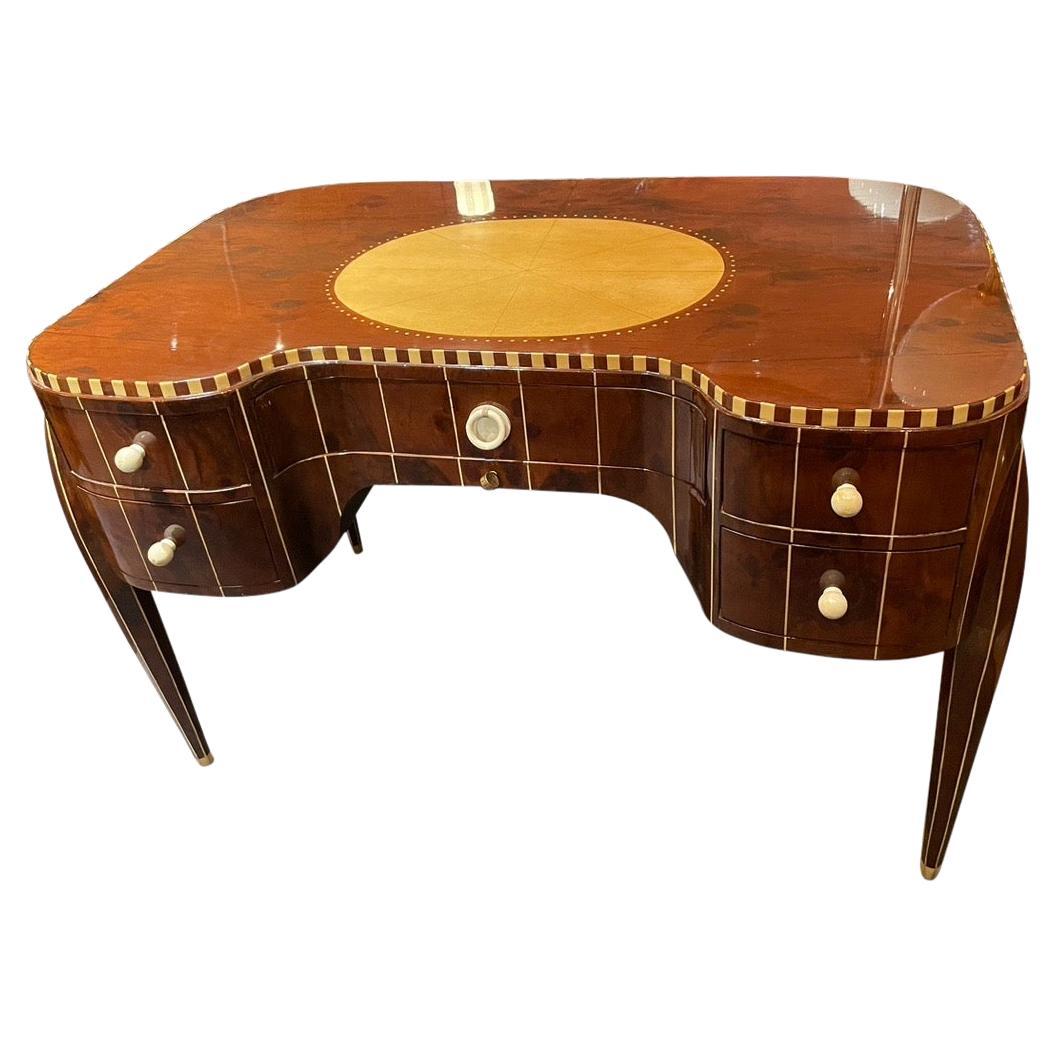 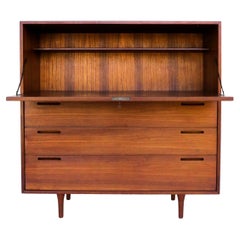 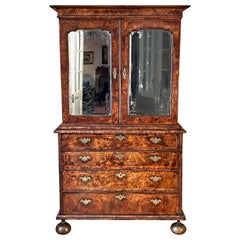 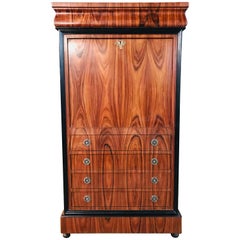 "Swedish Grace" Period Secretary
Located in New York, NY
Grace was the inspiration for this lovely birch secretary which makes working from home a joy! Three locking drawers sit beneath a generous drop-front with 6 interior drawers, a pair...
Category

1800s Folklore Secretary
Located in Memphis, TN
Add a little magic to your home with this hand painted, folklore secretary from the 1800s. Features slanted flap with drawer interior behind and five drawers. What's most fun about t...
Category

Johannes Andersen Teak Secretary Dresser
By Johannes Andersen
Located in San Diego, CA
This is an understated piece that, would be great for an entryway or used as a desk. Gorgeous old-growth teak and finger pull add to its restrained style. UNUSAL DANISH DESIGN. SLIDE...
Category

Italian Mahogany Cabinet Secretary, 1950s
Located in Meda, MB
Precious cabinet secretary produced in Italy in the 1950s, The whole cabinet is veneered in mahogany with a fine solid wood carving in the center of the two doors representing two b...
Category

Mahogany Secretary Desk, Northern Europe, 1900s
Located in Chorzów, PL
The antique, stylish secretary was made of mahogany wood in the 1927. A neat piece of furniture for the office in the company or at home, a little forgotten today and not fully disc...
Category

18th Century Fall top Desk (Secretaire a Abattant) Paris 1780, with Signature
Located in Belmont, MA
Exquisite secretaire a abattant (fall top desk), Paris 1780, kingwood and rosewood veneer on the outside. The inside additionally with mahogany veneer. With the original marble top a...
Category

Black Ebonized French Empire Secretary with Silver-Plated Fitting and Marble Top
Located in Vienna, AT
Antique ebonized Empire secretary with silver-plated bronze fittings and original black marble top. The piece was made in France in the 19th century and is a perfect example of the...
Category

19th Century Rosewood Ladies Secretary
Located in Opole, PL
We present you an 19th century ladies secretary. Made of rosewood and veneered inside with mahogany. This piece of furniture is of concave-convex shapes. From the front, it is closed...
Category

18th Century Empire Secretary Veneered with Mahogany
Located in Opole, PL
We present you an antique piece of furniture covered with mahogany veneer with beautiful grain. It is topped with a green marble board. The whole is dated the turn of the 18th and th...
Category

Danish Teak Bookcase, Desk Secretary by Poul Hundevad
Located in Pasadena, CA
This gorgeous secretary was designed by one of the premier Danish Mid-Century designers, Poul Hundevad. As many of the mid-century designers were, Hundevad was inspired by the past f...
Category

National Trust John Locke Secretaire
Located in Asheville, NC
This very rare Kindel reproduction is part of The National for Historic Preservation Collection, The Cliveden desk and bookcase is truly a masterpiece. An outstanding example of the ...
Category

Queen Anne Japanned Secretary Bookcase
Located in Essex, MA
With double arched top over a pair of arched mirror doors opening to a red interior fitted with drawers and shelves, the base with slant lid desk opening to expose a fitted interior ...
Category

Antique Baroque Style Top Desk Fully Inlaid
Located in Berlin, DE
With rich marquetry in this version, it is very rare to find such a similar piece of furniture. The cupboard stands on paw feet, high-quality maceteria inlays on all sides, i.e. inla...
Category

Pull-Out Desk Top Borge Mogensen Danish Teak Bookcase Tambour Door Secretary
By Børge Mogensen
Located in Chattanooga, TN
Borge Mogensen early Mid-Century Modern Danish teak desk. The stately piece has a deep red-orange patina from over half a century of age. No press board composite material on this. I...
Category

Secretary Desk with Storage Spaces, Scandinavian Design by Eric Gizard
By Eric Gizard
Located in Landivy, FR
This Secretaire desk is designed by the famous parisian Designer Eric Gizard and delivered fully mounted. The dimensions of the box itself are width 90 cm / 35.4'' x height 90 cm...
Category

Your antique, new or vintage secretary desk has become the (chic) saving grace of the "new normal" at home.

Simply put, a secretary desk is a multifunctional piece of furniture with a hinged writing surface that folds open or drops down. When the leaf is folded out, small inner storage compartments — pigeonholes, cubbies, recesses or drawers — are revealed.

Traditionally, a secretary is composed of two parts — a chest of drawers on the bottom and a cabinet with shelves on the top. Taking its name from the French word for the piece, secrétaire, the secretary desk dates back to the 18th century, when Paris-based cabinetmaker Jean-François Oeben, known for his exquisite marquetry and clever mechanical desks, is thought to have invented the secrétaire à abbattant, or drop-leaf desk.

While the defining drop-down feature of the secretary desk has remained constant, the materials used, as well as its configuration, size and style have evolved over time.

At first, secretaries were typically made from exotic woods, like rosewood, tulipwood and kingwood; later, hardwoods like cherry, maple, oak and mahogany were more common. The desks also became lighter, with space carved out of the lower half for the writer’s feet or with drawers replaced by legs — making them more table-like.

When open, the secretary is a dynamic, versatile Wunderkammer. When closed, it’s a sophisticated, space-saving piece of furniture.

“A fine secretary with a good provenance adds stature and credence to its owner — it is a cornerstone piece,” says antiques dealer Stanley Weiss, who specializes in 18th- and 19th-century English and American furniture. “In this disposable world, fine furniture is always passed on and speaks to who its owner is.”

No matter what style or period you choose, and no matter how you decide to use it, the timeless, flexible secretary desk is bound to become an indispensable part of your daily routine.

Browse a range of antique and vintage secretary desks on 1stDibs, including mid-century modern secretaires, Georgian secretaires and others.