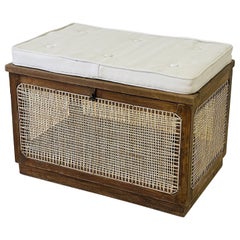 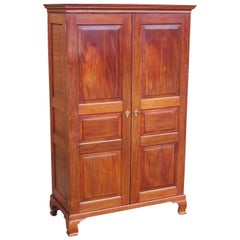 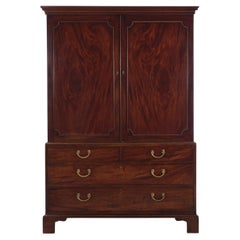 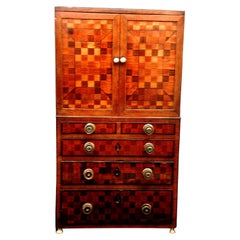 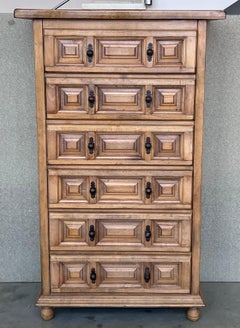 Swedish Two-Part Painted Linen Press Cabinet, 18th c. Rococo Period
Located in Wichita, KS
A Swedish painted linen press or armoire from the Rococo period, circa 1760. This piece is made in two parts with original locks and cast brass hardware. This cabinet is beautifully ...
Category

American Dining Piece/Linen Press
By William Morris American
Located in Milton, DE
This wounderfully detailed linen press is a well executed piece. The top has adjustible shelf and the bottom is divided into two drawers . What I love about this piece is the integra...
Category

Antique Carved Danish Step Back Cupboard
Located in Port Jervis, NY
Fantastic 4 door step back cupboard from Denmark. C1890 features a heavily carved face with a Danish inscription which translates to: On the white tablecloth is the women's work. Oth...
Category

Antique French Faux Bamboo Armoire
Located in High Point, NC
A faux bamboo armoire from France, produced circa 1900. A striking wooden chest standing seven and a half feet tall, seemingly having just traipsed in from the tropics with its three...
Category

1930s French Wooden Cabinets, a Pair
Located in High Point, NC
Elegant and understated, these twin cabinets in natural wood cut a svelte silhouette. Made in France in the 1930s, the warm honey-blonde wood of the exterior opens onto a set of four...
Category

Antique Dutch Linen Press in Pine with Sunburst Pediment & Barley Twist Columns
Located in Miami, FL
It is seldom we see an antique pine linen press of this quality and charm! From the Netherlands, a lovely linen press in light honey-colored pine with two paneled doors over three lo...
Category

Handmade Clothes Cabinet in Oak Designed by Sir Terence Conran
By Sir Terence Conran, BENCHMARK
Located in London, GB
The Honor Press is a timeless design from Terence Conran with sleek lines, beautiful dovetailed drawers and hand turned knobs.  It is made by hand at Benchmark’s Berkshire worksho...
Category

Edwardian Blanket Press in the Manner of Thomas Chippendale

Circa 18th Century Swedish Painted Wooden Chest & Decorative Portrait Interior
Located in London, GB
An incredibly beautifully painted Swedish trunk/chest dated back to 1797 which was most likely a marriage chest. It has a slightly scumbled brown background with a lovely flower wre...
Category

A vintage, new or antique linen press is a great way to prevent wrinkles while storing linens in a space that will remain dry.

Linen presses are a type of storage cabinet used to store domestic linens such as bedsheets, napkins and tablecloths. Early models had storage space as well as a pressing device, with some also having features that aired the linens. The purpose of these linen presses was to protect and care for valuable textiles.

These cupboards were popular from the 17th century to the 19th century in Europe and the United States, after which more modern options, like wardrobes and ironing boards, were widely adopted.

Early linen presses were often very simple, but over the years they became more complex and ornate with carved wooden details. As they frequently borrow elements from cupboards and wardrobes, linen presses are perfect for adding storage space to a home. Some can display decorative objects like dinnerware while storing sheets and other linen essentials in drawers.

While they have a practical purpose, linen presses can set the tone for a room especially because their large size makes them a focal point. Some have rustic looks, others have polished wood surfaces that reflect light, making a room seem brighter.

On 1stDibs, a range of vintage, new and antique linen presses can be found for anyone in need of a storage solution. They range from mid-century modern linen presses with angular lines, practical features and symmetrical shapes to Rococo pieces with soft lines, carved elements and delicate details.