Why Cartier and Boucheron Jewelry Ruled the Edwardian Era

Get to know the looks that defined this period of glamour and frivolity.
by 1stDibs Editors
Pin
Share
Tweet
Email

Classic Edwardian jewelry is often overshadowed by the more popular style of the era, Art Nouveau, which is a shame. At its best, Edwardian jewelry was all about the exquisite diamond, platinum and pearl creations made by such famous names as Cartier and Boucheron. 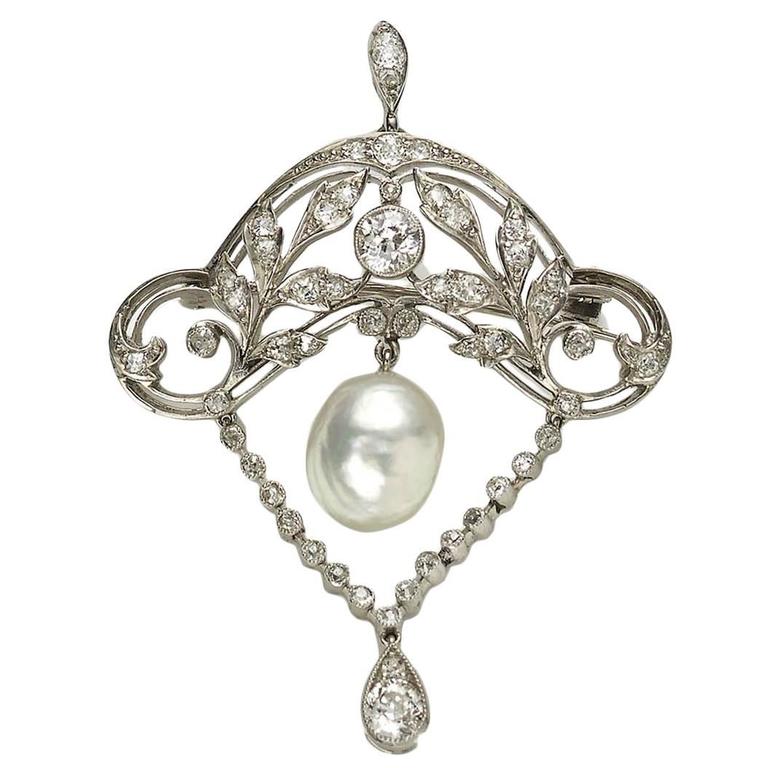 The Edwardian era is named for King Edward VII of Great Britain, who ruled from 1901 until 1910. Upon his ascension to the throne, Edward removed all reference to Victoriana by having Buckingham Place completely renovated by the designers of the Ritz Hotel in the fashion of the era. The king wanted to rival the glamorous courts of Germany and Russia, as well as stately British homes and the mansions of the Rothschilds. 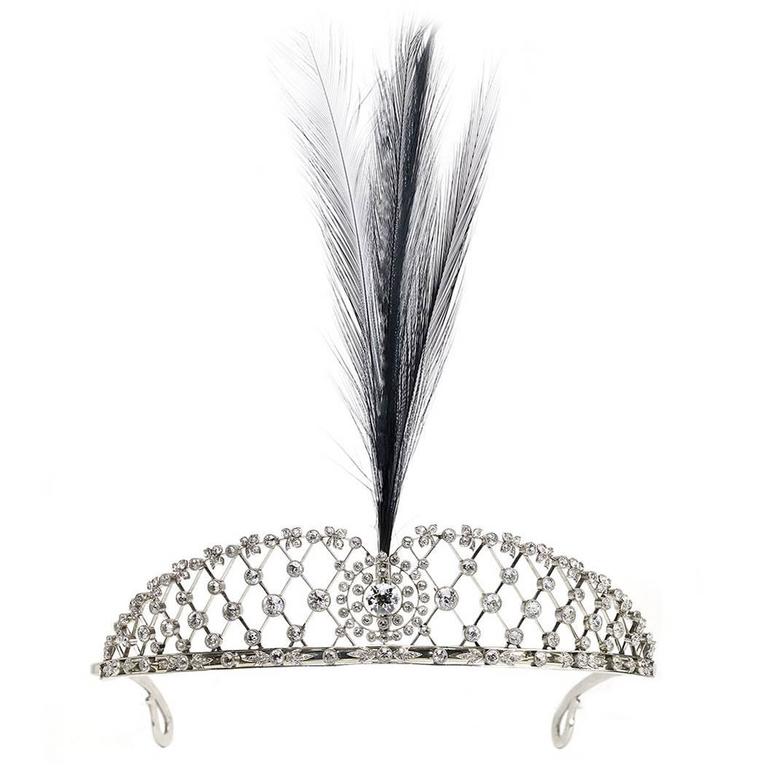 Edward introduced incredibly formal Buckingham Palace court presentations, balls and soirées, resulting in a huge demand for diamond jewels starting with his coronation in 1902. Dozens of tiaras and formal jewels in an updated 18th-century style were purchased from French jewelers Boucheron and Chaumet and from Russia’s Fabergé.

The court jewelers Asprey, Garrard, Carrington and the newly opened London branch of Cartier were all overwhelmed with orders for sumptuous diamond jewelry to be worn at the king’s elaborate coronation. Dozens of Indian princes and foreign potentates arrived in London for the crowning, all competing to look more splendid than the other.

Among the nobility and the nouveau riche, there was an unabashed display of material wealth, including the new Duchess of Marlborough, born a Vanderbilt, and other “dollar princesses.” At the same time, Mary Princess of Wales (later to become Queen Mary), developed her personal style motto: “One can never wear too many diamonds.”

At the time, pearls were more valuable than diamonds. So while today the scale and clarity of a diamond ring matters, back then the size and quantity of your pearls was more important a declaration of wealth.

Women of the day sported bejeweled headpieces like tiaras and bandeaus with feathered aigrettes. Another popular piece of jewelry that is said to have been directly inspired by Queen Alexandra were colliers de chien, or dog collars, which consisted of either a ribbon decorated with a brooch, a gemstone or several strands of pearls strung closely together. 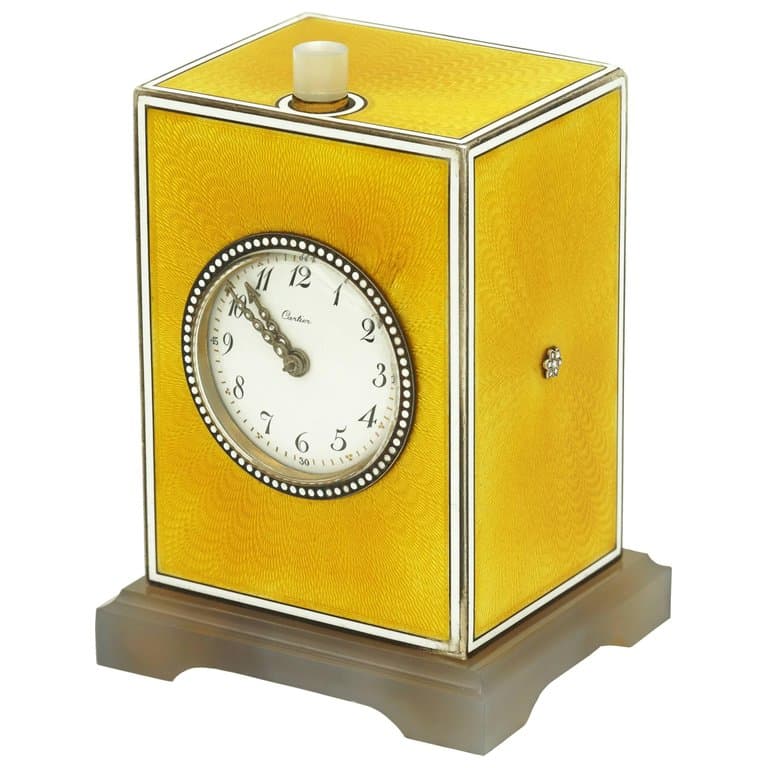 Two major jewelry houses, Cartier and Boucheron, were founded in the mid-1850s, and by the beginning of the 20th century, the wealthy considered them household names. The Cartier brand became even more desirable once the house became the official jewelry supplier to King Edward VII. Cartier took this title seriously and designed some of the most innovative jewelry of its day, since it was willing to experiment with new materials like platinum and because it was mindful of fashion trends.

For example, Cartier retailed an elongated necklace called the lavalier, named after the French theater actress Ève Lavallière, which was a double pendant. Boucheron also had its own signature piece, thanks to Paul LeGrand’s design for a necklace of strung pearls separated by diamond rondelles. 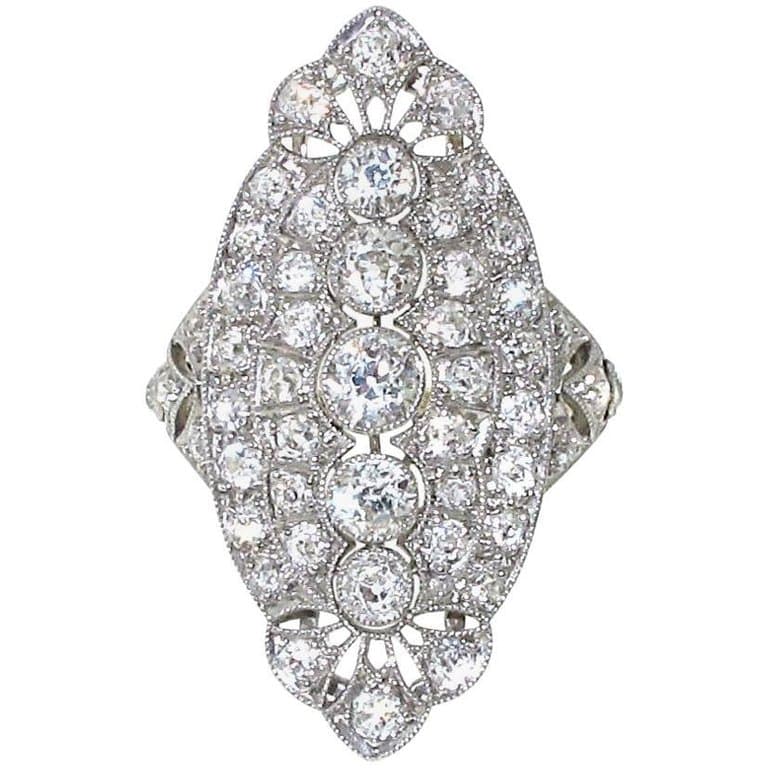 Cartier was the first to experiment with platinum, prompting the white-on-white look. A durable metal, platinum isn’t as malleable as gold and less of it is needed to make a strong setting. This led to the creation of an “invisible setting,” where diamonds looked liked there were floating in air, or on the skin. Filigree settings also became popular. This saw-piercing technique was decorative and at the same time created a sense of lightness.

Perhaps even more important than Cartier’s use of platinum was the founding of De Beers Consolidated Mines Limited in 1888. The discovery of new diamond mines made the stone more affordable and prompted the introduction of new gemstone cuts. It is not uncommon to see Edwardian jewels with baguette or briolette diamonds. In fact, a diamond filigree necklace often incorporated several cuts into one design.

The End of an Era 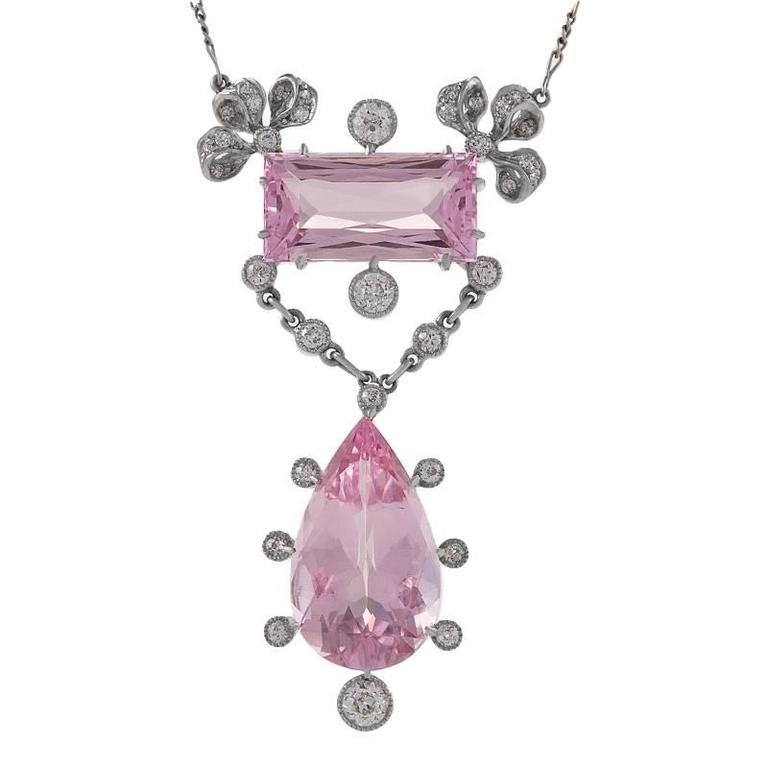 The frivolity of the Edwardian period came to a halt with the beginning of World War I in 1914. Platinum could no longer be used for the production of jewelry, and instead a white-gold alloy was introduced, which significantly reduced the cost of the pieces. Regardless, as the war effort took shape, there was little time for parties and niceties anyway. 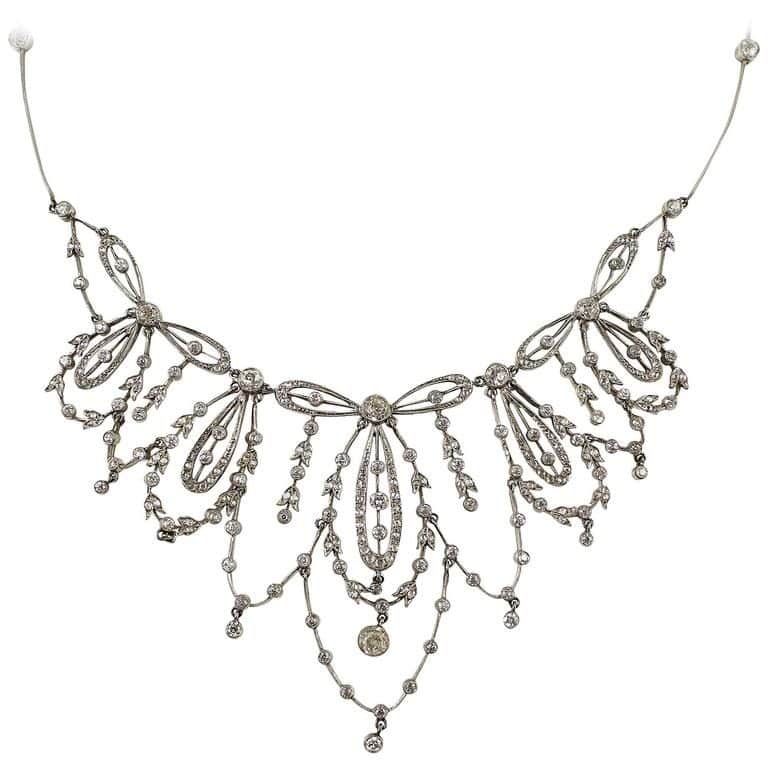