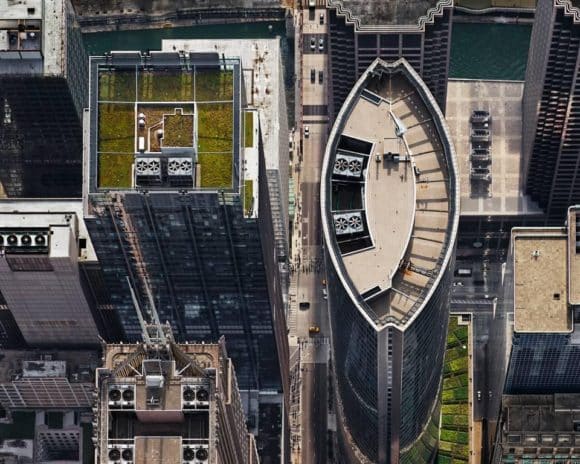 Chicago is the kind of classic, multi-faceted American city that offers a little bit of everything. For the gourmand, there’s the opportunity to sample everything from deep dish pizza to the haute cuisine of Grant Achatz. For the academic, there is lively economic debate at the University of Chicago. Architecture lovers have a near-endless list of Frank Lloyd Wright homes and Art Deco skyscrapers to tour, and the musically inclined can make an annual pilgrimage to Lollapalooza. Unsurprisingly, Chicago is also home to a number of world-class furniture and decor shops. To help design enthusiasts plan a summer trip — or an extra-long layover at O’Hare Airport — we interviewed five of Chicago’s best dealers about their specialties, favorite pieces and what spots not to miss while in town. 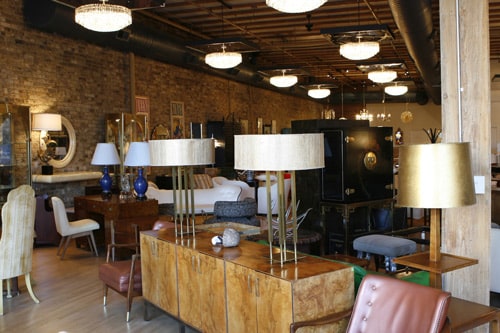 “We’re not afraid to mix, say, a turn-of-the-century sideboard with a pair of modern table lamps and an Italianate mirror,” says manager Gary Stier of Assemblage’s eclectic selection. However, the store does have its preferences, as it tends to stock finds from the 1940s, ‘50s and ‘60s. Here, you’ll find works from design luminaries such as Tommi Parzinger, Edward Wormley and Harvey Probber alongside English, French and even Asian antiques. “I would just say it’s classic elegance that we go for,” Stier says. Classic—and compelling.

Choice listings: A black-lacquered palm-leaf table by Phyllis Morris, Stier says. The 1970s table is “just a piece of art, it’s very Art Deco.” He also loves a rare writing table designed by Pierre Paulin for Baker. “The woods are amazing,” Stier says, and “it’s very reminiscent of Ruhlmann in the sense that he used the bird’s eye maple.”

While you’re here: Hit the Superdawg hot dog stand for lunch. Stier calls it a “Chicago icon, just like the Cubs or the Bears.” 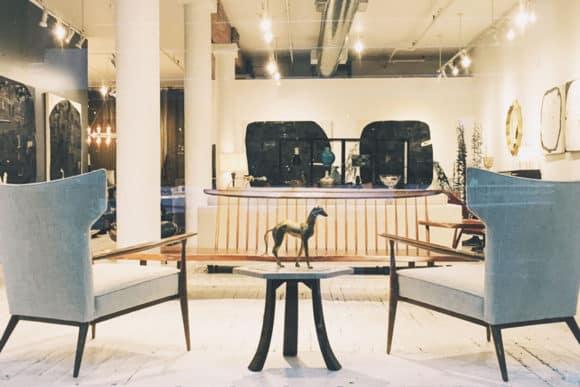 Founder Lawrence Converso studied mid-century American design in college, so it was only natural that he opened his 23-year-old shop in Chicago, home of the New Bauhaus School and German architect Mies van der Rohe. Initially he focused on Herman Miller’s modernist output, which he describes as the “root” of all contemporary design. Yet in recent years, he’s branched out to carry more decorative pieces from the likes of abstract artist and architect Richard Meier, contemporary painter Grant Newman and Art Deco-furniture maker Paul Frankl. “I feel like I’m a curator of my own world,” Converso says. “Most of the pieces I buy are pieces that I would live with.”

Choice listings: A white oak desk with a horseshoe-shaped top, commissioned by the Gannett Company in 1976. This is the piece that put Wendell Castle on the map, Converso says. Another favorite: A 1974 channel-back sofa by Edward Wormley. “The way Wormley designed that piece was almost like a bench in a car. I’d put that in a monochromatic interior to make it pop.”

While you’re here: “I live in Hyde Park, and every day when I drive by Lake Michigan, the colors change,” Converso says. “Watching them never gets old.” 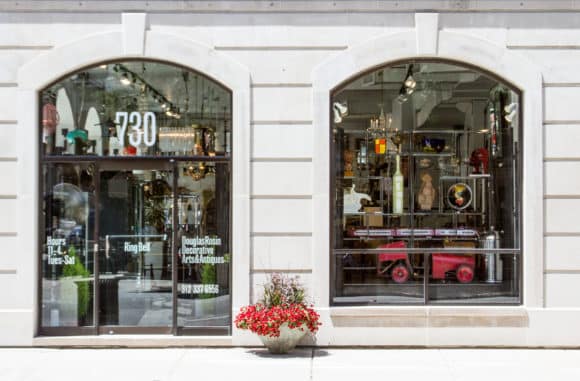 Back in the 1980s, Douglas Rosin was one of the Windy City’s first major dealers to trade in 20th century and Art Deco pieces. A mentor to famous names like Richard Wright and Patrick Parrish, Rosin’s shop was only open three days a week but always sold out. After three or four years of working with landscape and floral designer Barbara Rosin, the pair decided to move to Downtown Chicago and adopted a regular schedule. “I was the front-of-the-store person, he was more behind the scenes,” Barbara says of their business dynamic. “Our store is very eclectic. My taste is a bit in one direction, his taste is a bit more fun at this point and unusual.”

Choice listings: An arboreal bronze sculpture by Marie Zoe Greene-Mercier, Rosin says. “It’s so large that when it’s lit, you get a whole different feel to it.” Norman Black’s Surreal Landscape with Cello, from the 1960s, is another pick. “It’s really nicely painted.”

While you’re here: Drop by Lurie Gardens, a 2.5-acre garden at the southern end of Millennium Park in the Loop area. “It’s fabulous, especially at this time of year,” says Rosin. 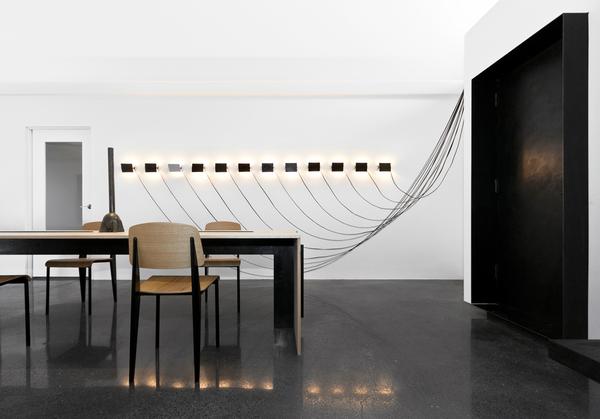 Since 2014, owner and artist Lukas Machnik’s shop has become a Chi-town destination for contemporary minimalist furnishings. “It’s a curated collection from various artists that has a cohesive voice,” says Machnik, whose own minimal hardwood furniture and calligraphy ink drawings are displayed alongside avant-garde works by Rick Owens. It’s not for the faint-hearted and has a darker feel to it, but then that’s the point. “Everyone always thinks it’s about an empty room,” he says of his stripped-down aesthetic, but really it’s about “architecture that warrants a museum-like atmosphere. The pieces you present need to be special.”

Choice listings: Lonney White’s monumental EXO sofa from 2015. “It’s steel with a bronze armature and very supple leather for the interior of the sofa,” Machnik says of the 900-pound design. “The bronze structure serves as a locking mechanism, which you can take off; the steel plates come off, and then the entire thing disassembles and can be shipped flat. It’s kind of like very expensive Ikea.”

While you’re here: Visit Volume Gallery on West Washington Boulevard. “They have a very strong voice, says Machnik, “they’re not following what’s out there, and the provenance of the work they show is solid.” 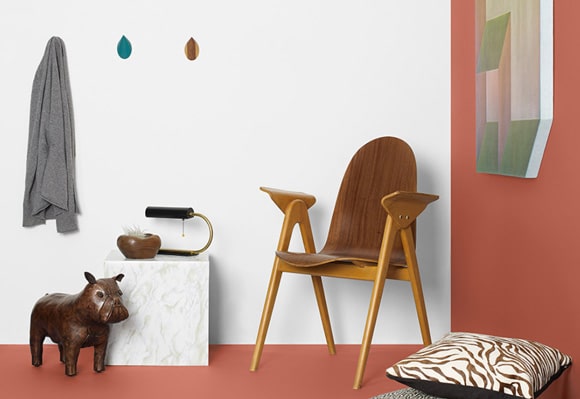 There are two parts of auction house veteran Richard Wright’s business: Wright Auctions, which features work in Chicago and its Madison Avenue gallery in New York, and Wright Now, the by-appointment-only retail shop. Launched in 2006, the latter was born out of a need to have a venue for pieces that may not work in an auction “but still have decorative value,” says director Melissa Riddle. Those items run the gamut from Modernist cabinets to Jean Prouvé daybeds and silverware. “Any of those things are offered to us, and if we feel there’s a buyer out there, most of the time we’ll try to find that buyer,” Riddle says.

Choice listing: A set of six dining chairs by Bo Fjaestad, circa 1935. “A lot of pine comes out of Sweden, and these are anthropomorphic in a way and have a really cool circular opening in the back,” Riddle says. “You could see them at a white enamel table.”

While you’re here: Check out Fulton Market, an artsy shopping center within the Fulton River District in Chicago’s West Loop. “Everybody in that area seems really into craft and all those things that make a neighborhood exciting,” Riddle says. “It’s a fantastic part of the city.”