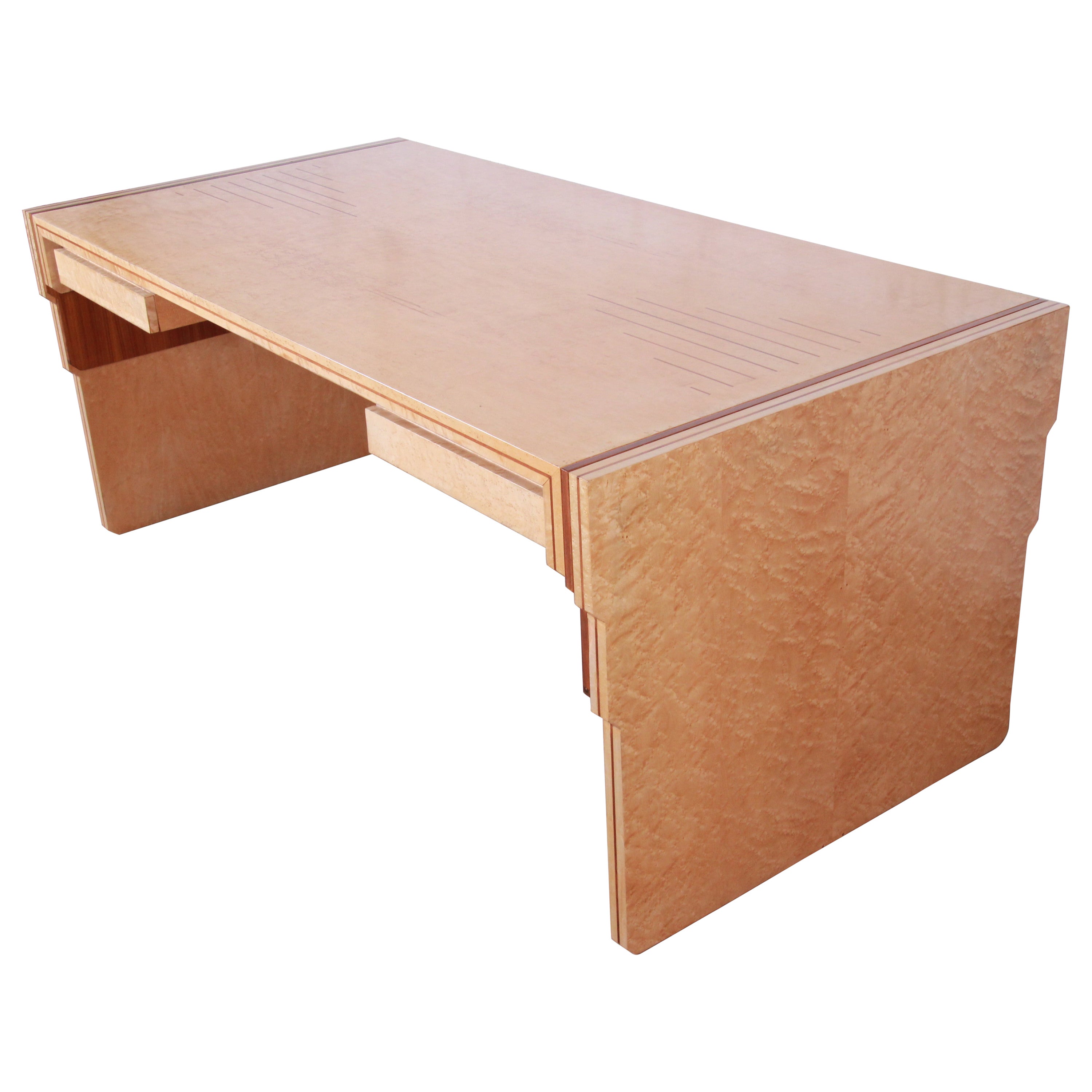 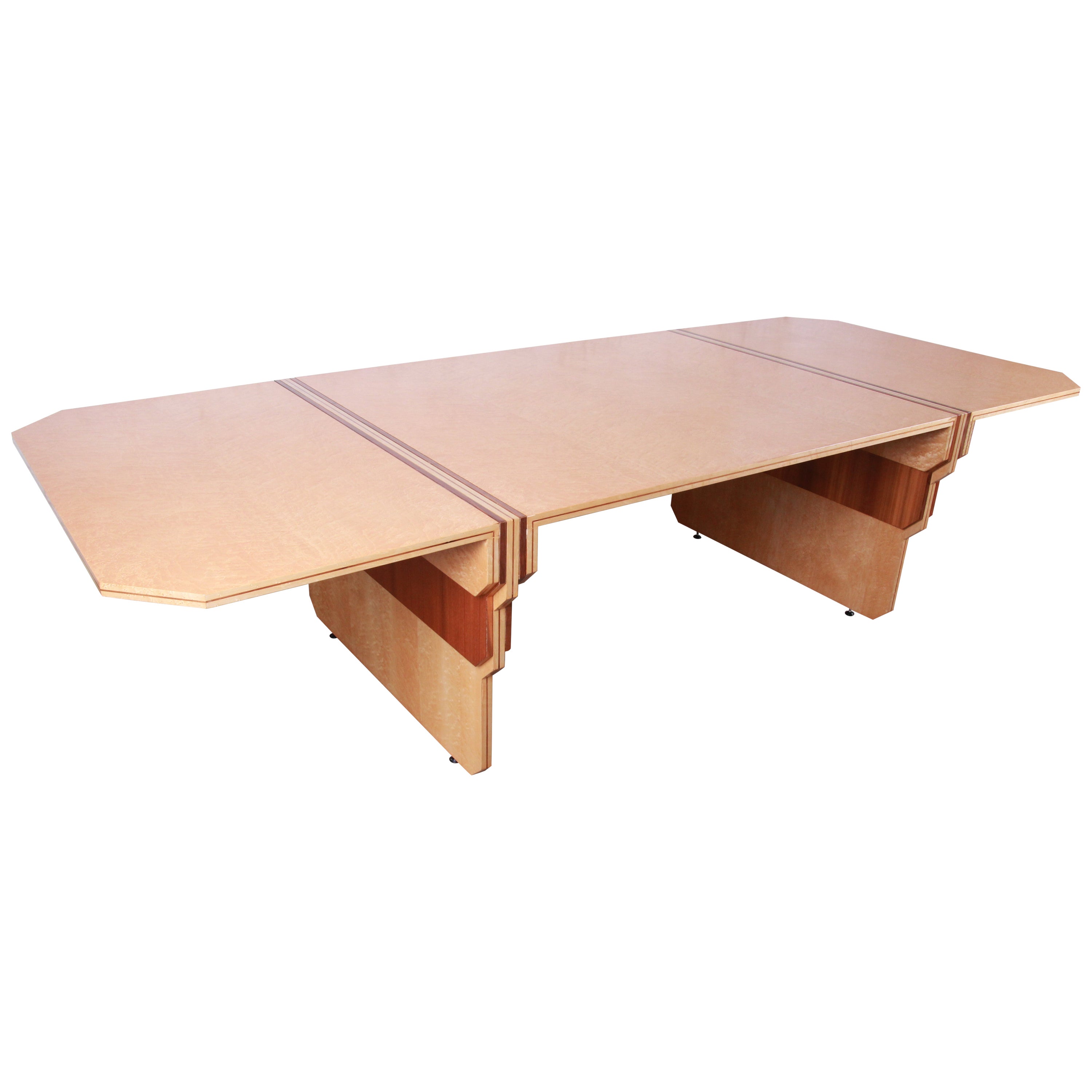 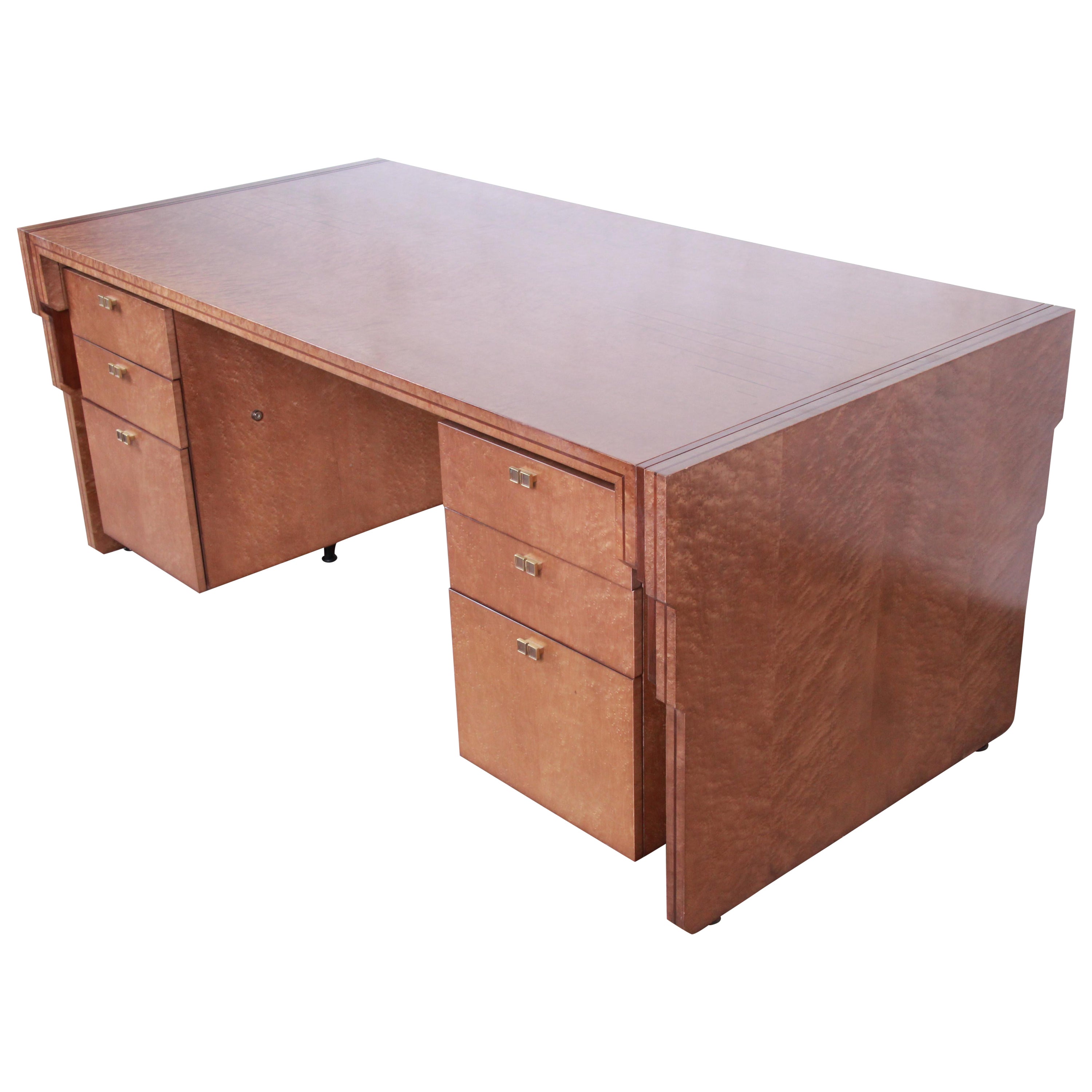 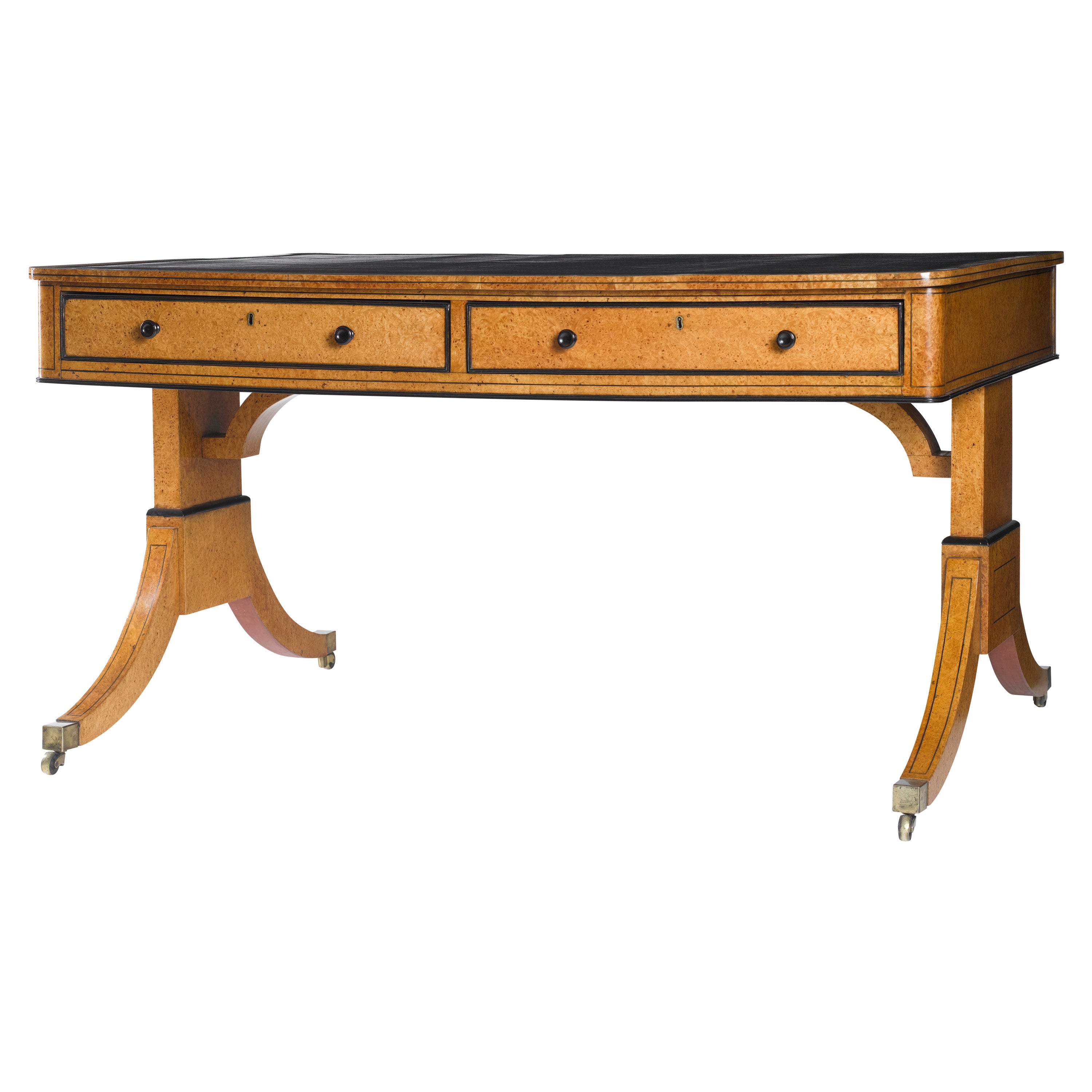 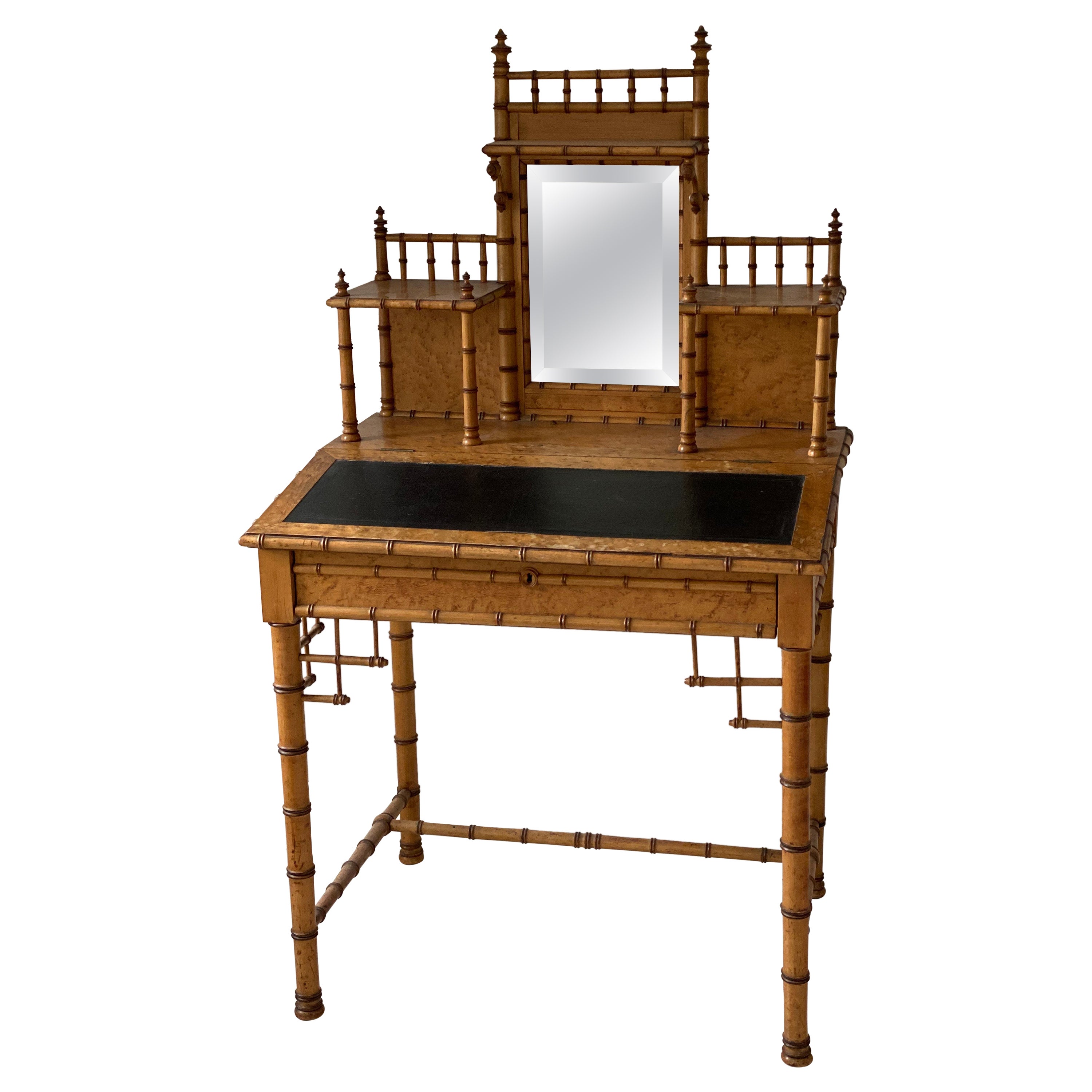 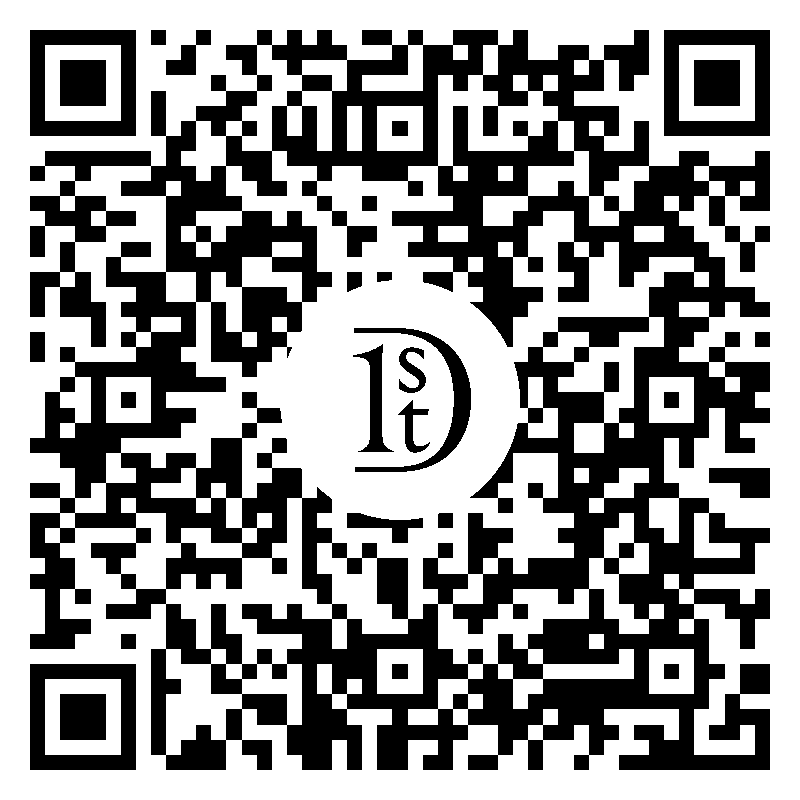 Exceedingly rare Pierre Paulin reception desk or writing table for Baker. Bird's-eye maple veneers inlaid with dark walnut in the signature motif for the Paulin collection. Very well-made and heavy with exquisite wood grain. Could also work as a small dining table. In the mid-1980s, Baker retained Pierre Paulin to design a singular collection of furniture. Paulin stated he took inspiration from the interiors of the Élysée Palace that he had completed for Georges Pompidou and François Mitterrand. The resulting venture proved costly and only a rarefied few of the Paulin pieces were created.

In 1971, the Mobilier National — a department of France’s Ministry of Culture in charge of furnishing top-tier government offices and embassies — commissioned Paulin to redesign President Georges Pompidou’s private apartment in the Élysée Palace. In three years, Paulin transformed the staid rooms into futuristic environments with curved, fabric-clad walls and furnishings such as bookcases made from an arrangement of smoked-glass U shapes, flower-like pedestal chairs and pumpkin-esque loungers. Ten years later, the Mobilier National called on Paulin again, this time to furnish the private office of President François Mitterand. Paulin responded with an angular, postmodern take on neoclassical furniture, pieces that looked surprisingly at home in the paneled, Savonnerie-carpeted Louis XVI rooms. As those two Élysée Palace projects show, Paulin furniture works well both in a total decor or when used as a counterpoint to traditional pieces. You will see on these pages that Pierre Paulin’s creations have a unique personality: bright and playful yet sophisticated and suave. 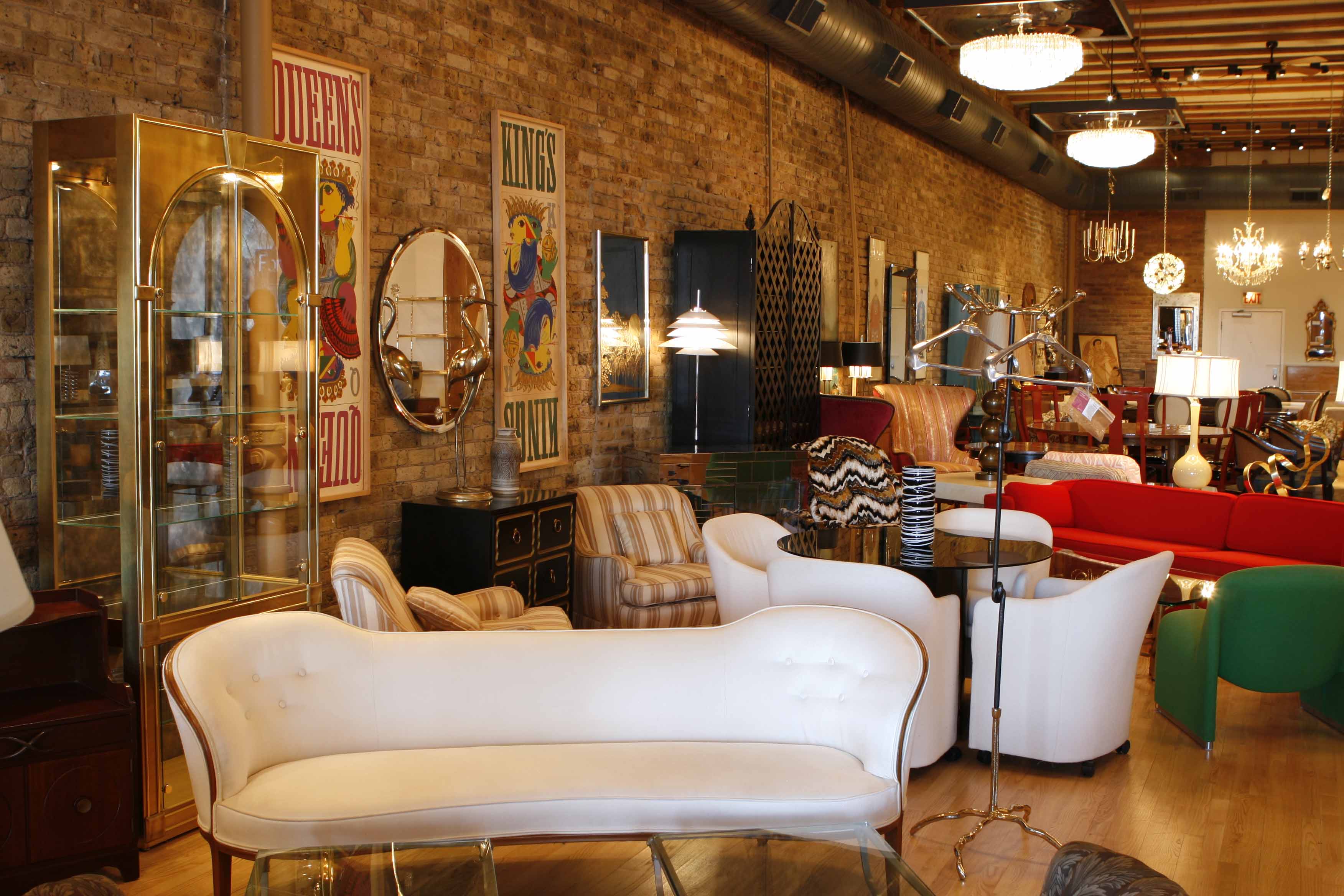 About the Seller
4.9 / 5
Located in Chicago, IL
Platinum Seller
These expertly vetted sellers are 1stDibs' most experienced sellers and are rated highest by our customers.
Established in 2007
1stDibs seller since 2008
475 sales on 1stDibs
Typical response time: <1 hour
Associations
20th Century Specialists
More From This Seller
View All From Seller

$5,021
Vintage English Art Deco Style Bird's-Eye Maple Table
Located in Savannah, GA
This is a table made in England, circa 1960. The table is in a beautiful high fashion Art Deco style. The table is made of an absolutely beautiful cut of bird's-eye Maple. It has a s...
Category