H 31.5 in. Dm 23.63 in.
Bruno Zach Vienna Bronze Austria Semi-Nude Lady with Hoop Bergmann circa 1930
By Bruno Zach
Located in Vienna, AT
Interesting Vienna bronze figurine: Semi-nude lady holding a hoop It is a finest figurine. The bare-breasted lady stands on round flat bronze base which is attached to column made ...
Category

H 13.97 in. Dm 6.49 in.
Standing Lamp by Jules Leleu
By Jules Leleu
Located in Montreal, QC
Fine crystal and gilt bronze standing lamp by Jules Leleu, stamped Leleu and numbered under the base. This lamp comes from a Montreal collection and all their Leleu pieces where bou...
Category

H 42 in. Dm 15 in.
Art Deco Large And Impressive Hand Crafted 'Bathing Ladies' Wall Plaque
Located in Devon, England
This is a super rare opportunity to acquire one of these beautifully reduced versions of 'bathing ladies' the original being located in the famous Paris ''HOTEL des Collectionneur. T...
Category

H 29.14 in. W 21.26 in. D 2.76 in.
Stylish Art Deco Wall Crucifix Gilt Bronze Christ Corpus Mounted on a Oak Cross
Located in Lisse, NL
Rare and beautiful, fire gilt Art Deco era sculpture of Christ. Some crucifixes come with sculptures of Christ in terrible agony, but the face underneath the crown of thorns on this...
Category

Gilt Iron and Crystal Chandelier in the Style of Maison Baguès, France, 1940s 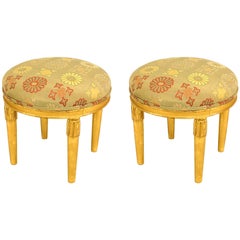 Art Deco Gilt Bronze Sculpture of a Woman by Rochlitz

H 31.75 in. W 48 in. D 18.5 in.
Chic Art Deco, Gilt and Lacquered Chinese Coromandel Screen
Located in Lambertville, NJ
The Coromandel screen in black with large gilt cartouches with images of Chinese porcelain vases with floral decoration. The back in black lacquer with engraved decoration. This is a...
Category

H 41 in. Dm 8.50 in.
Art deco Gilt Bronze Pair of Sconces, France 1930
Located in Sitges, Barcelona
Beautiful pair of French Art Deco period of the 30's gilted bronze sconces. The pair is in a very good condition, stamped A B and numbered on the backplate, electrical parts have be...
Category

H 15.75 in. W 9.50 in. D 4.50 in.
French Art Deco Gilt Bronze Horse Head Floor Lamp
Located in New York, NY
French Art Deco (circa 1930) gilded bronze floor lamp with a centered horse head on a cylindrical shaft and resting on a round brown marble base.
Category

H 68 in. W 12 in. D 12 in.
French Art Deco Gilt Brass and Lucite Floor Lamp
Located in New York, NY
French Art Deco (circa 1930) floor lamp with gilded brass base and uplight and a shaft of 4 tubular lucite rods.
Category

H 52 in. Dm 35 in.
Art Deco Gilt Silver and Mother of Pearl Mosaic Picture Frame, Wisdom
By Laura G Art with Heart
Located in Sarezzo, IT
Wisdom is a masterpiece Art Deco picture frame mosaic in mother-of-pearl and golden silver. The gorgeous picture frame for table is handcrafted in Italy and it is a piece of the La...
Category

H 10.63 in. W 0 in. D 0 in.
Pair of Vintage French Art Deco Gilt Painted Metal Wall Mirrors
Located in Dallas, TX
Decorate a master bathroom with this elegant pair of Art Deco mirrors. Crafted in France circa 1970, each mirror is decorated with intricate metal scroll around the frame. Both piece...
Category

Choose from an assortment of styles, material and more with respect to the art deco gilt you’re looking for at 1stDibs. Each art deco gilt for sale was constructed with extraordinary care, often using metal, glass and bronze. If you’re shopping for an art deco gilt, we have 1406 options in-stock, while there are 38 modern editions to choose from as well. Your living room may not be complete without an art deco gilt — find older editions for sale from the 19th Century and newer versions made as recently as the 21st Century. When you’re browsing for the right art deco gilt, those designed in Art Deco, Hollywood Regency and Mid-Century Modern styles are of considerable interest. A well-made art deco gilt has long been a part of the offerings for many furniture designers and manufacturers, but those produced by Jules Leleu, Maison Baguès and Paul Follot are consistently popular.

How Much is a Art Deco Gilt?

An art deco gilt can differ in price owing to various characteristics — the average selling price 1stDibs is $3,393, while the lowest priced sells for $61 and the highest can go for as much as $500,000.