H 2.36 in. Dm 5.31 in.
Cameo Glass Vase by Daum
By Daum
Located in New York, NY
A French Art Nouveau cameo glass vase by Daum, featuring a scene of red blooming flowers on an opaque white martelé ground. The flowers, which have dark centers, are suspended from d...
Category

H 4.63 in. Dm 4.69 in.
Cameo Glass Bowl by Daum Nancy
By Daum
Located in New Orleans, LA
Leafy pendants adorn this fine cameo glass bowl by Daum, known for their singular pieces of art glass of the utmost quality. Daum has remained an important name in French glass produ...
Category

H 3.25 in. Dm 11 in.
Cameo Glass Bowl by Daum Nancy
By Daum
Located in New Orleans, LA
Wildflowers are in bloom on this rare cameo art glass bowl by the renowned French glassmaking firm of Daum, Nancy. The graceful vessel features a wavy-edged rim and delicate, wistful...
Category

H 5 in. W 12.5 in. D 3.5 in.
French Cameo Glass Vase by Daum
By Daum
Located in New York, NY
A French cameo glass vase by Daum. The vase, with martelé background, has red wheel-carved lily flowers rising on green stems from its carved green base. A vase with similar decor...
Category 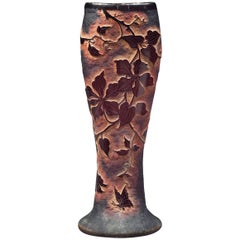 H 2.56 in. Dm 5.71 in.
French Art Nouveau Cameo Glass Vase by Daum
By Daum
Located in New York, NY
A French wheel carved cameo glass vase by Daum. The creation of this vase combined the technique of hammering for the foot and wheel carving for the flower decorations. The backgroun...
Category

H 9.75 in. Dm 2.75 in.
Daum Nancy Cameo Glass Bowl, France, circa 1900
By Daum
Located in Sydney, NSW
Yellow orchids are in bloom on this rare cameo art glass bowl by the renowned French glass making firm of Daum, Nancy. The graceful vessel features a wavy-edged rim and delicate, wis...
Category

Cameo Daum For Sale on 1stDibs

Choose from an assortment of styles, material and more with respect to the cameo daum you’re looking for at 1stDibs. Frequently made of glass, art glass and cut glass, every cameo daum was constructed with great care. You’ve searched high and low for the perfect cameo daum —, we have versions that date back to the 19th Century alongside those produced as recently as the 20th Century are available. A cameo daum is a generally popular piece of furniture, but those created in Art Nouveau and Art Deco styles are sought with frequency. A well-made cameo daum has long been a part of the offerings for many furniture designers and manufacturers, but those produced by Daum and Georges De Feure are consistently popular.

How Much are Cameo Daum?

A cameo daum can differ in price owing to various characteristics — the average selling price 1stDibs is $7,000, while the lowest priced sells for $1,440 and the highest can go for as much as $65,000.

Finding the Right Vases Vessels for You

For centuries, vases and vessels have had meaningful functional value in civilizations all over the world. In Ancient Greece, ceramic vessels were used for transporting water and dry goods, holding bouquets of flowers, for storage and more. Outside of utilitarian use, in cities such as Athens, vases were a medium for artistic expression — pottery was a canvas for artists to illustrate their cultures’ unique people, beliefs and more. And pottery skills were handed down from fathers to sons.

Every antique and vintage vase and vessel, from decorative Italian urns to French 19th-century Louis XVI–style lidded vases, carries with it a rich, layered story.

On 1stDibs, there is a vast array of vases and vessels in a variety of colors, sizes and shapes. Our collection features vessels made from delicate materials such as ceramic and glass as well as durable materials like rustproof metals and stone.

A contemporary vase can help introduce an air of elegance to your minimalist space while an antique Chinese jar would make a luxurious addition to an Asian-inspired interior. Alternatively, if you’re looking for a statement piece, consider an Art Deco vase crafted by Italian architect and furniture designer Giò Ponti.

Vases and vessels — be they handmade pots, handblown glass wine bottles or otherwise — are versatile, practical decorative objects, and no matter your particular design preferences or color scheme, they can add beauty to any home decor style. Find yours on 1stDibs today.