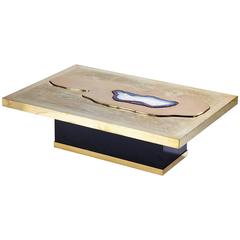 H 17.33 in. W 60.24 in. D 32.68 in.
Fog Coffee Table by CAUV Design Acid Etched Glass Burnished Steel and Redwood
By Joseph Cauvel of CAUV Design
Located in Brooklyn, NY
Inspired by thick foggy days on the water front that allow us a glimpse of far away beauty through a hazy lens and some hidden details kept secret for a clear sky day. The "Fog" coff...
Category

H 17.25 in. Dm 47.5 in.
Philip & Kelvin LaVerne, Rare Coffee Table Acid-Etched Pewter, Bronze, 1960s
By Philip and Kelvin LaVerne
Located in West Palm Beach, FL
A rare and possibly custom ordered round coffee table / cocktail table by Philip & Kelvin LaVerne. The top has an Asian motif similar to that of the "Chan" series while the modernist...
Category

H 17.5 in. Dm 47 in.
Acid Etched Copper and Agate Coffee Table on a Black Base, Lova Creations, 1980s
By Lova Creation
Located in Baambrugge, NL
Polished acid etched brass coffee table made by the Lova Creations, Belgium, 1980s. The beautiful copper tabletop is inset with agate decorations and rests upon a black Brutalist st...
Category

H 17 in. W 60 in. D 21 in.
Acid-Etched Coffee Table by Bernhard Rohne for Mastercraft
Located in Boston, MA
This gorgeous brass and lacquered wood table has been artistically etched with abstract drawings.
Category

H 18 in. W 55 in. D 29.25 in.
Acid-Etched Side Table
Located in Brooklyn, NY
1960s acid-etched round side table in the style of Philip and Kelvin LaVerne. The acid-etched texture creates a lovely mottled finished surface which sits on a sturdy, cross lap-join...
Category

H 15 in. W 55 in. D 32 in.
Coffee Table Acid Etched Top, USA Circa 1970
By Marc D'haenens
Located in Jersey City, NJ
Round stainless steel coffee table with a decorative, acid etched top and a round drum base covered in seamless steel.
Category

H 18 in. W 54.5 in. D 28.75 in.
Mastercraft Brass Coffee Table by Bernhard Rohne, Acid Etched
By Mastercraft, Bernhard Rohne
Located in National City, CA
For your consideration a beautiful coffee table with rectangular shape designed by Berhnard Rohne for Mastercraft, USA, circa 1980s. The table features a frame made of solid wood ...
Category

H 17.25 in. W 52.5 in. D 26.75 in.
Harry Lunstead Acid Etched Copper and Walnut Coffee Table
By Harry Lunstead
Located in Tempe, AZ
Available right now we have this stunning coffee table by Seattle artist and furniture designer Harry Lunstead. Lunstead has been known and renowned for his work with copper and usin...
Category

H 15 in. W 67.5 in. D 31.5 in.
Coffee Table Acid Etched by Pace circa 1970 American
By Pace Collection
Located in Jersey City, NJ
Round Coffee table has an acid etched top of stainless steel. The top is an 1 1/2 thick with a steel border around the sides and sits on a round barrel base of wood. The diameter of...
Category

H 17.33 in. W 60.24 in. D 32.68 in.
Philip & Kelvin LaVerne, Rare Coffee Table Acid-Etched Pewter, Bronze, 1960s
By Philip and Kelvin LaVerne
Located in West Palm Beach, FL
A rare and possibly custom ordered round coffee table or cocktail table by Philip & Kelvin LaVerne. The top bears the motif of the "Chan" series while the modernist base is one norma...
Category

H 17.75 in. W 55 in. D 29.25 in.
Impressive Acid Etched Vintage Copper Coffee Table Attributed to Bernhard Rohne
By Bernhard Rohne
Located in Highclere, Newbury
An impressive acid etched copper table on a walnut base attributed to German artist/designer Bernhard Rohne. Rohne was active in the 1960s and 1970s and was famous for producing u...
Category

How Much are Acid Etched Coffee Table?