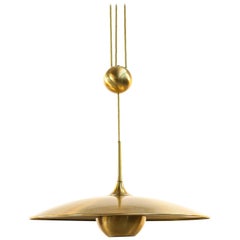 H 86 in. Dm 12.22 in.
Italian Mid-Century Modern Counter-Balance Fixture or Pendant
Located in New York, NY
An Italian counter-balance fixture. The shade moves up and down via a weighted counter-balance and the height is variable between 35 and 57&quot;.
Category

H 36 in. Dm 21.5 in.
Florian Schulz Brass Pendant Light 'Onos 55' Counterweight Counter Balance, 1970
By Florian Schulz
Located in Graz, AT
One of three height adjustable pendant lamps by Florian Schulz, Germany, manufactured in midcentury, circa 1970 (late 1960s-early 1970s). The fixture is made of solid brass with a po...
Category

H 66.93 in. Dm 21.66 in.
Florian Schulz Brass Pendant Light 'Onos 55' Counterweight Counter Balance, 1970
By Florian Schulz
Located in Graz, AT
A height adjustable pendant lamp by Florian Schulz, Germany, manufactured in midcentury, circa 1970 (late 1960s-early 1970s). The fixture is made of solid polished brass which has a...
Category

H 30.71 in. W 78.75 in. D 14.97 in.
Florian Schulz Dome Pendant Light, Brass Counterweight Counter Balance, 1970
By Florian Schulz
Located in Graz, AT
A height adjustable pendant lamp by Florian Schulz, Germany, manufactured in midcentury, circa 1970 (late 1960s-early 1970s). The fixture is made of solid polished brass which has a...
Category

H 27 in. W 62 in. D 30.25 in.
Paavo Tynell Brass Counter Balance Pendant Lamp
By Paavo Tynell
Located in New York, NY
A counter balance pendant lamp, produced in Finland, circa 1950s by designer Paavo Tynell, including a unique pulley, to adjust the height of the light fixture from the ceiling, whic...
Category

H 45 in. Dm 17.5 in.
Red Counter-Balance Pendant, Italy Mid-Century
Located in New York, NY
Playful counterbalance pendant with a very long brass arm ending on one side in a brass counterbalance weight and on the other side in a red shade holding one socket. Most likely ma...
Category

H 32 in. W 54 in. D 5.5 in.
Double Nickel Counter Balance Pendants by Florian Schulz
By Florian Schulz
Located in Los Angeles, CA
Fantastic nickel counter balance light by Florian Schulz. Vintage fixture with two counterweights and two dome shades. Both lights move up and down independently of the other on clot...
Category

How Much is a Counter Balance Pendant?

The average selling price for a counter balance pendant at 1stDibs is $4,200, while they’re typically $976 on the low end and $14,500 for the highest priced.