1950s grey textil and wooden base Daybed by Theo Ruth

H 32 in. W 28 in. D 32 in.
Pierre Paulin Side Table 877
By Pierre Paulin
Located in Dronten, NL
Rare white side table model 877 by French designer Pierre Paulin for Artifort.
Category

Settee by Pierre Paulin for Artifort

H 28 in. W 44 in. D 28 in.
Pierre Paulin Daybed 118 - re-edition
By Pierre Paulin
Located in Paris, FR
A revolutionary piece on the French market of the early Fifties, the minimalist elegance of the Daybed banquette has every chance of achieving even greater success today, given that ...
Category

H 25 in. W 31.25 in. D 30 in.
Pierre Paulin "ABCD" Settee, France, 1968
By Pierre Paulin
Located in New York, NY
The “ABCD” settee by Pierre Paulin, 1968 is both fun and functional. Vivid grey upholstery covers a foam and fiberglass structure, with four casters at the bottom. It is in excellent...
Category

H 23.5 in. W 64 in. D 30 in.
Pierre Paulin, Pair of Armchairs "Mushroom", 1970s
By Pierre Paulin
Located in Saint-Ouen, FR
Pierre Paulin for Artifort, attributed to. Mushroom armchair in white glass fiber with a circular leg that flares to form the circular seat and back. Inscription "Artifort mush...
Category

CM 196 Side Chair by Pierre Paulin

CM 196 Side Chair by Pierre Paulin

H 28 in. W 27.5 in. D 25 in.
Pierre Paulin Tongue Lounge Chair for Artifort
By Pierre Paulin
Located in New York, NY
Pierre Paulin tongue lounge chair designed in 1968 and made by Artifort. This modern low lounge chair is upholstered in a deep purple fabric and will be a sculptural accent to any ro...
Category

H 24.81 in. W 33.47 in. D 26.78 in.
Pierre Paulin Vintage Mushroom Chairs
By Artifort, Pierre Paulin
Located in Highland, IN
A terrific example of Paulin's organic design aesthetic, the mushroom chair sprouts from the floor and envelops the sitter. The curvy form looks beautiful from every side and has a s...
Category

H 31.89 in. W 18.12 in. D 19.69 in.
Pierre Paulin "Osaka" Sofa for La Cividina, Italy
By Pierre Paulin
Located in Miami Beach, FL
Modular articulated and adjustable sofa system, comprised of a back and 2 seats floating on an adjustable steel frame. Designed by Pierre Paulin in 1967 for the 1970 World Expo in Os...
Category

H 26 in. W 130 in. D 42 in.
Pierre Paulin Vintage Mushroom Chairs
By Artifort, Pierre Paulin
Located in Highland, IN
A terrific example of Paulin's organic design aesthetic, the mushroom chair sprouts from the floor and envelops the sitter. The curvy form looks beautiful from every side and has a s...
Category

H 12.72 in. W 15.75 in. D 15.75 in.
Pierre Paulin Model 6135 'Small' Wall Applique/Sconce
By Pierre Paulin
Located in London, GB
Made from folded metal, this light creates a precisely focused effect, shielded from the eye. Designed initially for the bedroom, it is today offered in a wide range to create many ...
Category

H 25.6 in. W 29.14 in. D 35.44 in.
Pierre Paulin Model 6135 (Large) Wall Applique/Sconce
By Pierre Paulin
Located in London, GB
Made from folded metal, this light creates a precisely focussed effect, shielded from the eye. Designed initially for the bedroom, it is today offered in a wide range to create many...
Category

H 13.78 in. Dm 19.69 in.
Artifort Mushroom Chair by Pierre Paulin
By Artifort, Pierre Paulin
Located in New York, NY
Mushroom chair In Tonus 4 Color 609 - color of the fabric in the second image + Felt Gliders The Mushroom armchair is one of the world’s most famous designs. Designer Pierre Pauli...
Category

Pair of Ben Chairs by Pierre Paulin for Artifort

H 28.35 in. W 50.79 in. D 24.02 in.
Pair of Ben Chairs by Pierre Paulin for Artifort
By Pierre Paulin
Located in Dronten, NL
Pair of ten ben armchairs in dark grey Kvadrat Tonus wool on aluminum base. Marked with label on the inside of the base.
Category

Pair of Ben Chairs by Pierre Paulin for Artifort

H 37.41 in. W 32.29 in. D 29.53 in.
Pair of Original Artifort Mushroom Ottomans by Pierre Paulin
By Pierre Paulin
Located in Brooklyn, NY
Pair of mushroom footstools in original, orange wool fabric designed by Pierre Paulin in 1963. Labelled on base: Artifort, 1975. The "Mushroom" footstool is the complement to Paulin'...
Category

H 14 in. Dm 20.5 in.
Pierre Paulin Little Tulip Pair of Chairs by Artifort
By Pierre Paulin
Located in Miami, FL
A pair of Pierre Paulin tulip chairs. Aluminum base with upholstered seats. The chairs have the original upholstery in great condition. Super comfortable and swivel.
Category

H 14.57 in. Dm 40.56 in.
Rare Pair of Pierre Paulin Arm Chairs for Thonet
By Pierre Paulin
Located in Amsterdam, NL
Wonderful set of 2 extremely rare arm chairs by Pierre Paulin. These chairs were especially made for the American Embassy in Brussels, Belgium.
Category

Paulin Pierre For Sale on 1stDibs

How Much is a Paulin Pierre?

In 1971, the Mobilier National — a department of France’s Ministry of Culture in charge of furnishing top-tier government offices and embassies — commissioned Paulin to redesign President Georges Pompidou’s private apartment in the Élysée Palace. In three years, Paulin transformed the staid rooms into futuristic environments with curved, fabric-clad walls and furnishings such as bookcases made from an arrangement of smoked-glass U shapes, flower-like pedestal chairs and pumpkin-esque loungers. Ten years later, the Mobilier National called on Paulin again, this time to furnish the private office of President François Mitterand. Paulin responded with an angular, postmodern take on neoclassical furniture, pieces that looked surprisingly at home in the paneled, Savonnerie-carpeted Louis XVI rooms. As those two Élysée Palace projects show, Paulin furniture works well both in a total decor or when used as a counterpoint to traditional pieces. You will see on these pages that Pierre Paulin’s creations have a unique personality: bright and playful yet sophisticated and suave. 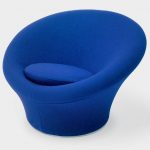