H 14.97 in. W 64.18 in. D 42.13 in.
Rectangular White Coffee Table
By Modenese Gastone
Located in Milan, IT
Simplicity and elegance characterize this charming, Baroque style, rectangular coffee table, with Queen Anne style legs. Available in white, the table is a perfect mix of classic and...
Category

H 16.15 in. W 45.28 in. D 25.6 in.
Square White Coffee Table
By Modenese Gastone
Located in Milan, IT
This elegant coffee table stands out for its delicate visual balance and high quality of the materials. A versatile piece of furniture, it is available in white. The square shape, co...
Category

H 20 in. W 55.13 in. D 27.63 in.
Liz White Coffee Table
Located in Paris, FR
Coffee table Liz white with metal structure in gold finish. With up and down white marble top. Also available with up and down black marble top.
Category

H 18.12 in. W 39.38 in. D 39.38 in.
Joy White Coffee Table
By Elli Design
Located in Milan, IT
Part of the Joy series, this coffee table is light and modern, thanks to the metal structure made of a base ring supporting a series of parallel rods that curve inward and then open ...
Category

H 14.18 in. Dm 23.63 in.
Filone White Coffee Table
By Luce di Carrara
Located in Milan, IT
Also available in a gray variant, this sophisticated coffee table is distinguished by an unexpected sense of lightness due to the white Versilys marble of its enthralling structure. ...
Category 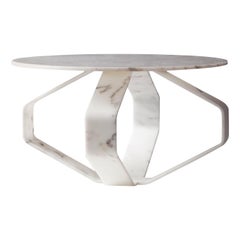 H 18.31 in. W 22.45 in. D 22.45 in.
Washington Black and White Coffee Table
By Elli Design
Located in Milan, IT
This striking coffee table was entirely made by hand and its shape is reminiscent of the delicate curves of the Capitol dome. The iron rods making its base are worked by an expert ar...
Category

H 15.75 in. W 35.44 in. D 15.75 in.
White Coffee Table with Tile Mosaic Surface
Located in NYC, NY
A coffee table with an interesting base of wood lattice. Top inset with a tile mosaic and the top is groved at the side and rounded at the ends.
Category

H 15.75 in. W 42.92 in. D 23.23 in.
Geometric White Coffee Table from Rocky Collection by Joel Escalona
By Joel Escalona
Located in Mexico City, MX
Rocky, a little expression of domestic rebellion, somewhere between disruption and innovation. A new way of protection for our goods. Rocky coffee table is part of Rocky collection d...
Category

H 12.6 in. Dm 23.63 in.
Space Age Vintage White Coffee Table with Glass Top, circa 1970
Located in Vienna, AT
A space age vintage coffee table, which features wooden legs set in a tripod shape and painted in white, while holding a glass plate in a typical 1970s style. The glass top has a thi...
Category

H 17.33 in. Dm 30.32 in.
White Quartz Coffee Table
Located in Paris, FR
Coffee Table White Quartz with base structure in metal in gold chrome finish. Top in white natural quartz. Each piece is unique as each quartz top is unique.
Category

H 17.72 in. W 47.25 in. D 47.25 in.
Coffee Table 'I' in White Terrazzo
By Bentu Design
Located in Paris, FR
'I' is a collection of tables: coffee / side tables, dining tables, bar tables. The base and the structures are in steel, and the table top is in terrazzo. by Bentu design Ma...
Category

Coffee Table 'I' in White Terrazzo

H 17.72 in. Dm 19.69 in.
Contemporary Torii Slab Coffee Table in Burnt Cedar & Brass by Ordinal Indicator
By Mike White
Located in Germantown, NY
Burnt cedar and polished brass inserts make up this coffee table designed after a Japanese Torii. A Torii is a traditional Japanese gate commonly found at the entrance of a Shinto Sh...
Category

H 16 in. W 40 in. D 40 in.
Donald Coffee Table Monochrome White
By Chapel Petrassi
Located in Firenze, IT
Donald is a multifunctional table which has a sculptural and cosmic. Donald slots into the real space by interacting colors and forms in an astral dimension.
Category

H 18.51 in. Dm 27.56 in.
ZigZag White Carrara Coffee Table
By House of Retroguardia
Located in Milan, IT
A splendid addition to any contemporary setting, this coffee table is marked by a captivating knurled texture that highlights the round tabletop in opaque white Carrara marble, desig...
Category

H 17.72 in. W 47.25 in. D 47.25 in.
White Carrara Marble Coffe Table
By Il Pezzo Mancante
Located in Firenze, IT
Coffee table made of a solid block of white Carrara marble from the finest quarries, with decorative small spheres and hand-welded base in light bronze finish brass. Made in our atel...
Category

H 13.39 in. W 35.44 in. D 11.82 in.
Montis White High Gloss Flint Coffee Table
By Montis, Gert Batenburg
Located in New York, NY
Flint is a whimsical coffee table with a surprising combination of simplicity and an understated natural character. It has a wafer thin top, tapered to the edges, which is sturdily a...
Category

H 15 in. W 42 in. D 42 in.
White Iron Coffee Table Base
Located in Delray Beach, FL
Beautiful white iron coffee table base can be a great accent piece in any living space. This table is being sold as is without top, however would look great with a glass tabletop, ma...
Category

H 16.25 in. W 36.5 in. D 18.75 in.
White Italian Travertine Rectangular Coffee Table, Contemporary
Located in New York, NY
Sculptural travertine rectangular coffee table. Travertine is from Italy, table is made in the United States. See image four for surface. This table is honed and unfilled. Can be ...
Category

H 15.75 in. W 49.22 in. D 29.14 in.
Amorph Net Coffee Table, Lacquered White,
By Amorph Inc.
Located in Gardena, CA
Net coffee table is a futuristic sculptural art table with a dynamic form designed and manufactured by Amorph. Net could be fitted in modern homes or offices or any spaces featuring ...
Category

H 12 in. W 38 in. D 58 in.
Amorph Lust Coffee Table, Lacquered White,
By Amorph Inc.
Located in Gardena, CA
Lust coffee table is a futuristic sculptural art table with a dynamic form designed and manufactured by Amorph. Lust is made out of MDF with Lacquer finish. Measures: Lust comes with...
Category

H 12 in. W 28 in. D 62 in.
Batea white oak veneer Coffee Table
By Cotidiano
Located in Mexico City, MX
The Coffee Table Batea takes inspiration from the universality of ancestral everyday objects that are still used, such as the batea. This antique wooden tray opens the way to our woo...
Category

H 11.82 in. W 55.12 in. D 24.02 in.
Plus White and Gold Coffee Table
By Tremolada
Located in Milan, IT
Seemingly simple, the plus coffee table is the perfect mix of clean lines and gentle curves, making it a truly stand out piece in any contemporary living space. Shown here with a lac...
Category

Plus White and Gold Coffee Table

H 18 in. Dm 39.75 in.
White and Gold Square Coffee Table
By A.R. Arredamenti
Located in Milan, IT
This coffee table exudes refined sophistication in its sinuous and sleek silhouette enhanced by an elegant combination of white and gold. Crafted of white eucalyptus-veneered MDF, th...
Category

H 16.15 in. W 43.31 in. D 27.96 in.
White Lacquered Triskelion Scroll Coffee Table
Located in Pasadena, TX
A modern sculptural form white lacquer coffee table with an round glass top. A design reminiscent of the works of Karl Springer.
Category

H 14.57 in. W 38.98 in. D 37.8 in.
White Grasscloth Coffee Table with Smoked Glass
By Schumacher
Located in New York, NY
This coffee table is covered in a painted white grasscloth and features smoked glass in the center. Since Schumacher was founded in 1889, our family-owned company has been synonym...
Category

How Much are White Coffee Tables?

White coffee tables can differ in price owing to various characteristics — the average selling price at 1stDibs is $3,400, while the lowest priced sells for $75 and the highest can go for as much as $59,300.