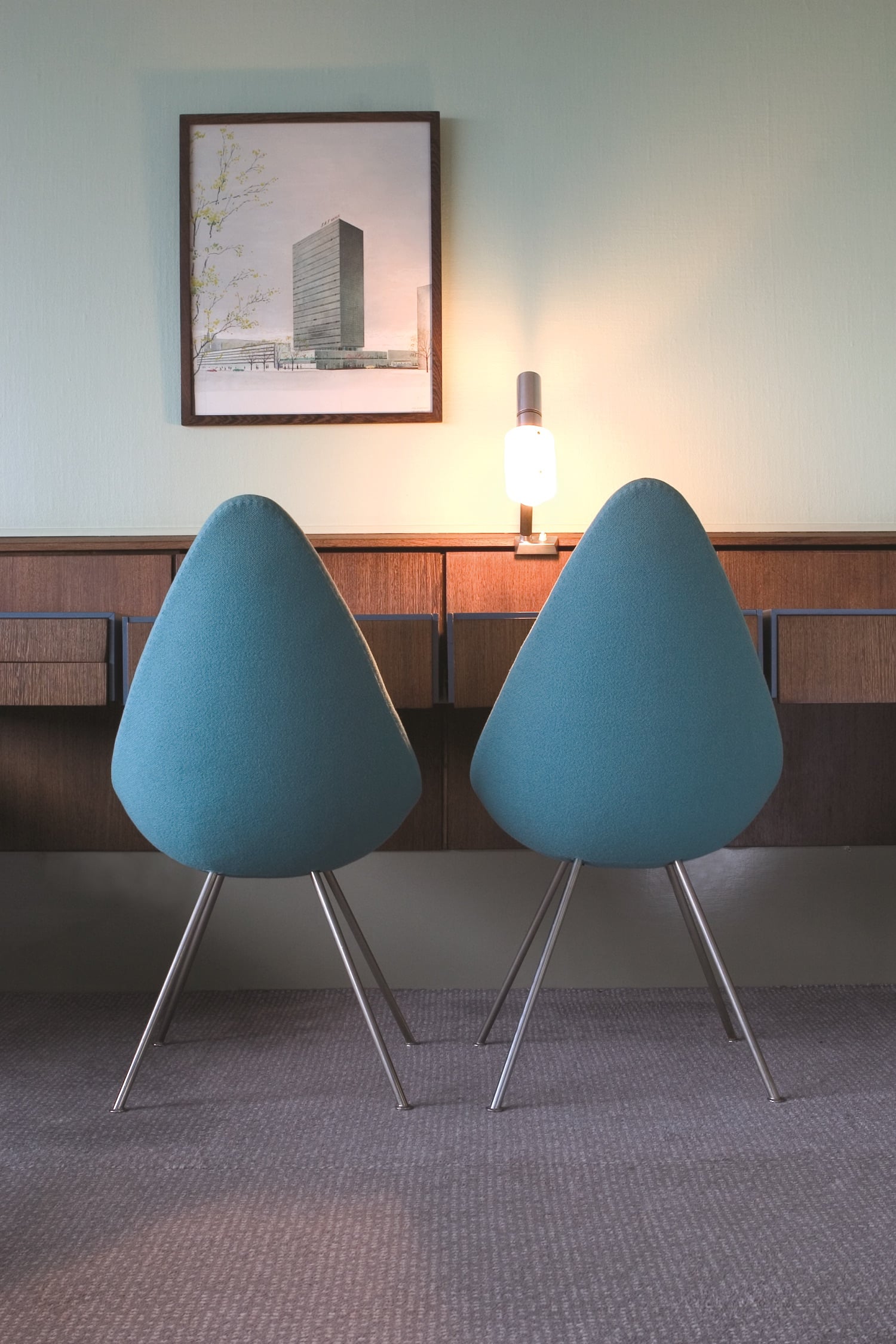 What would Arne Jacobsen have done? That’s the question the team at Copenhagen’s Radisson Blu Royal Hotel frequently returned to during the recent renovation of this iconic Jet Age building. Opened in 1960, the world’s first design hotel was the only accommodation property created by the Danish architect and furniture innovator.

“We felt strongly that some of the important architectural features of the original Arne Jacobsen hotel had been lost over the past decades. So we felt it was crucial to recreate and restore some of the main features and materials of both the rooms and public spaces,” says Signe Bindslev Henriksen, cofounder of Space Copenhagen, the project’s main designers. “With that said, travel behavior, expectations, modern demand for comfort and work/leisure rhythms have changed dramatically since it was built. Through our choices of furniture and materials, we wished to accommodate this new way of inhabiting a hotel — still with a focus on beautiful materials, refined detailing and strong, modern design.” 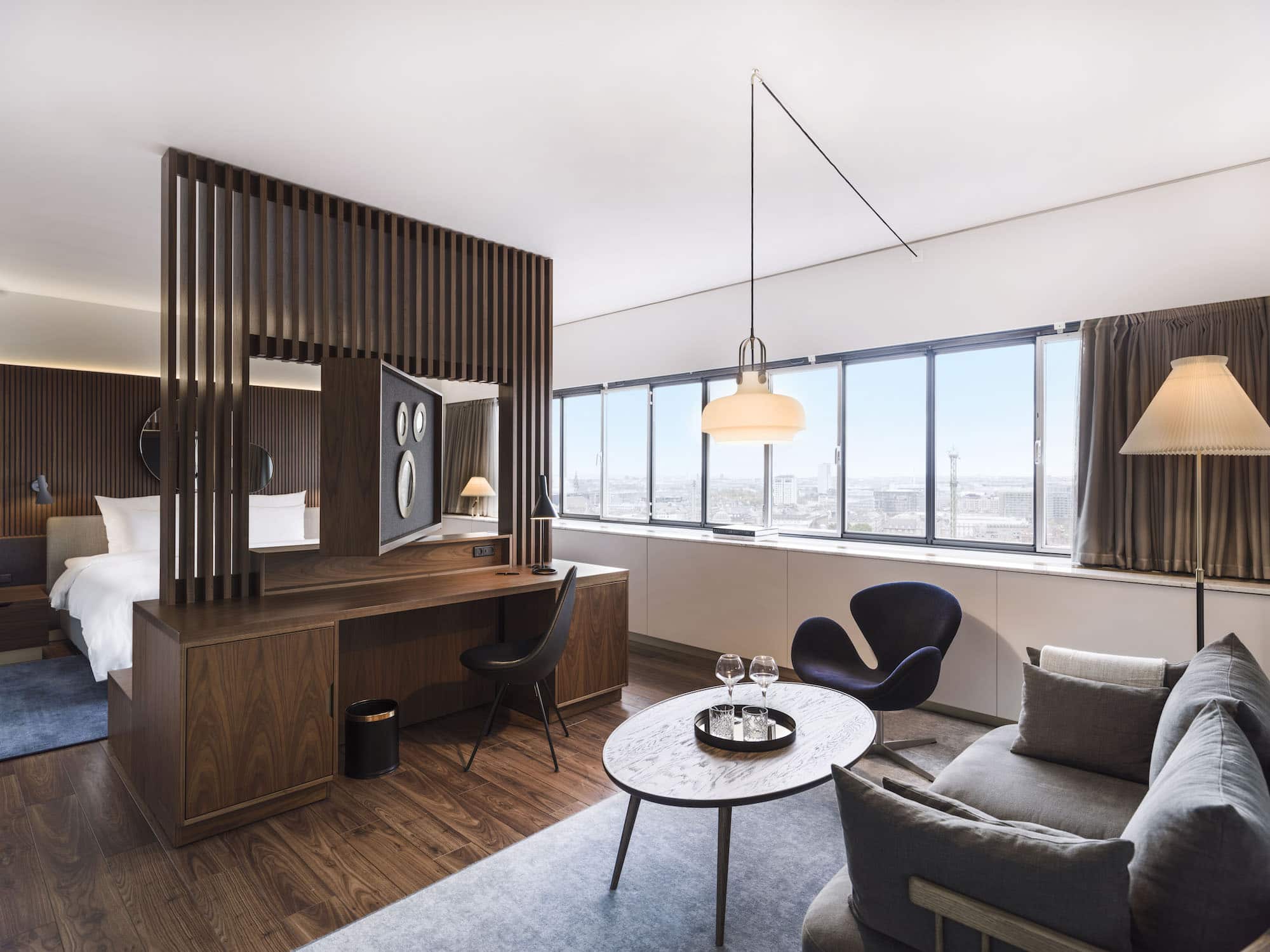 Originally called the SAS Royal Hotel, Denmark’s first skyscraper took its name from Scandinavian Airline Systems, which had envisioned a centrally located terminal that could conveniently whizz jet-setting guests from the hotel to the airport in style.

Jacobsen was not only behind the architecture — a rectangle sitting perpendicular on another rectangle, with rows of windows reflecting the changing weather — he also designed the interiors in their entirety, from the now-famous furniture to the cutlery to the keys. This total design, or Gesamtkunstwerk, put the 22-story building ahead of its time.

With the goal of returning the Blu Royal to its origins as a design-focused destination, the renovation team was inspired by Jacobsen’s combination of functionality and sophistication. While Space Copenhagen designed the majority of the guest rooms, along with the lobby, restaurant, bar and meeting rooms, Spanish designer Jaime Hayon was responsible for room 506. And room 606, one of the world’s most famous hotel suites, was left exactly as Jacobsen had designed it.

The Study took a tour of the hotel. Here are some of the highlights. 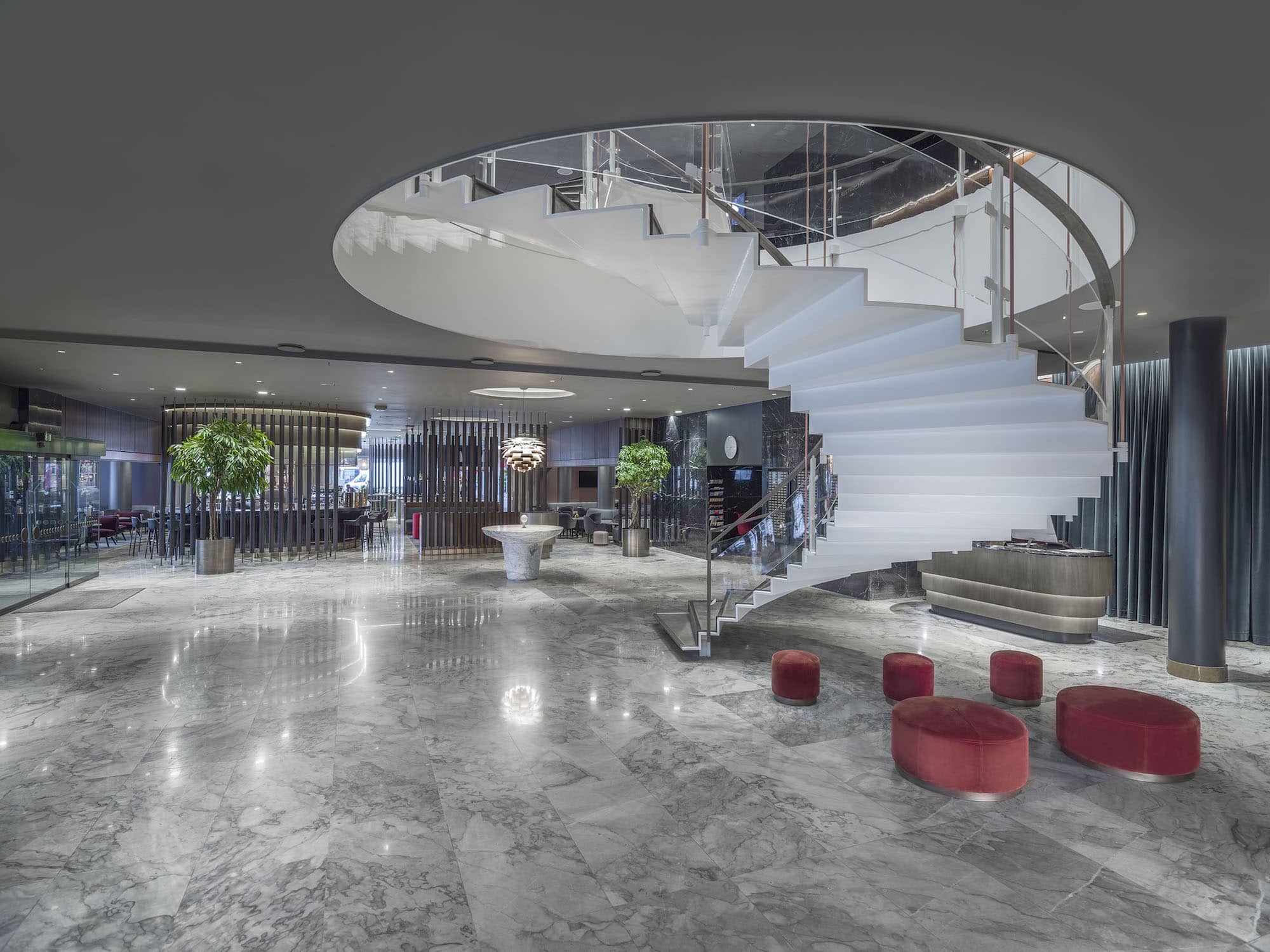 It was Jacobsen’s intention for the ground-floor lobby to be a lively, social space that brings people together. The folks at Space Copenhagen honored this idea in their redesign. They repositioned the reception to open up the space and added a fireplace to foster conviviality. The lobby’s centerpiece is Jacobsen’s spiraling suspended staircase, which pushed construction and engineering boundaries at the time.

Referring to vintage photographs, Space Copenhagen recreated elements that got lost over the years, such as leather wrapping on the handrails. Original wood paneling, Nero Marquina marble and Jacobsen-designed clocks remain. His famous Swan and Egg chairs can be found throughout the lobby. Designed specifically for the hotel, their organic shapes offered a contrast between the building’s straight lines. His lesser-known Pot chairs were also reintroduced into the space. 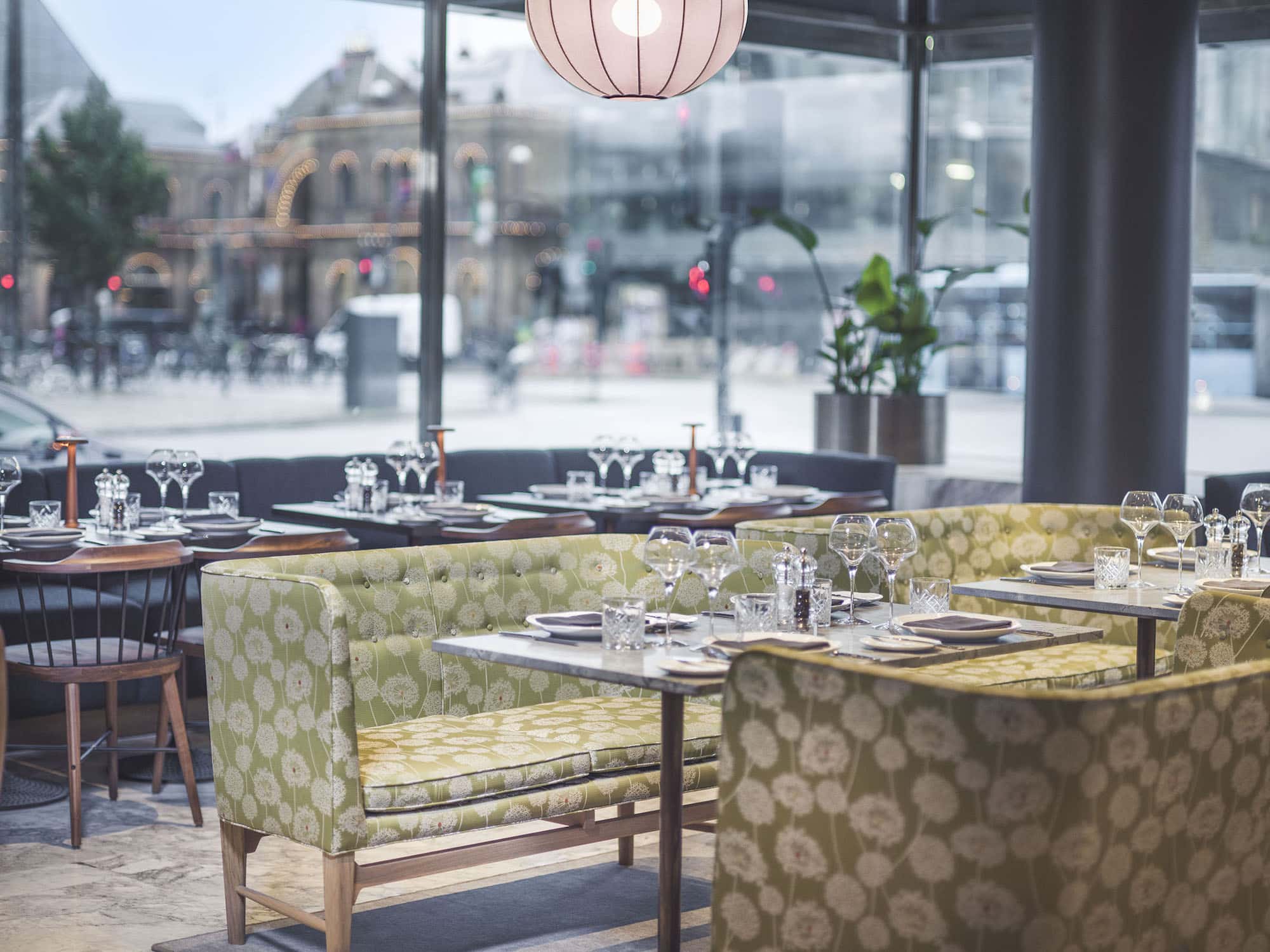 Also on the ground floor, the modernized Café Royal restaurant and bar blends revived Jacobsen designs with contemporary pieces. Pulled from the hotel’s storage room are his streamlined dining tables and Mayor banquettes — upholstered in green with a floral motif — that draw on Danish traditions of utilizing fine woods and functional solutions for which Jacobsen was so well known. 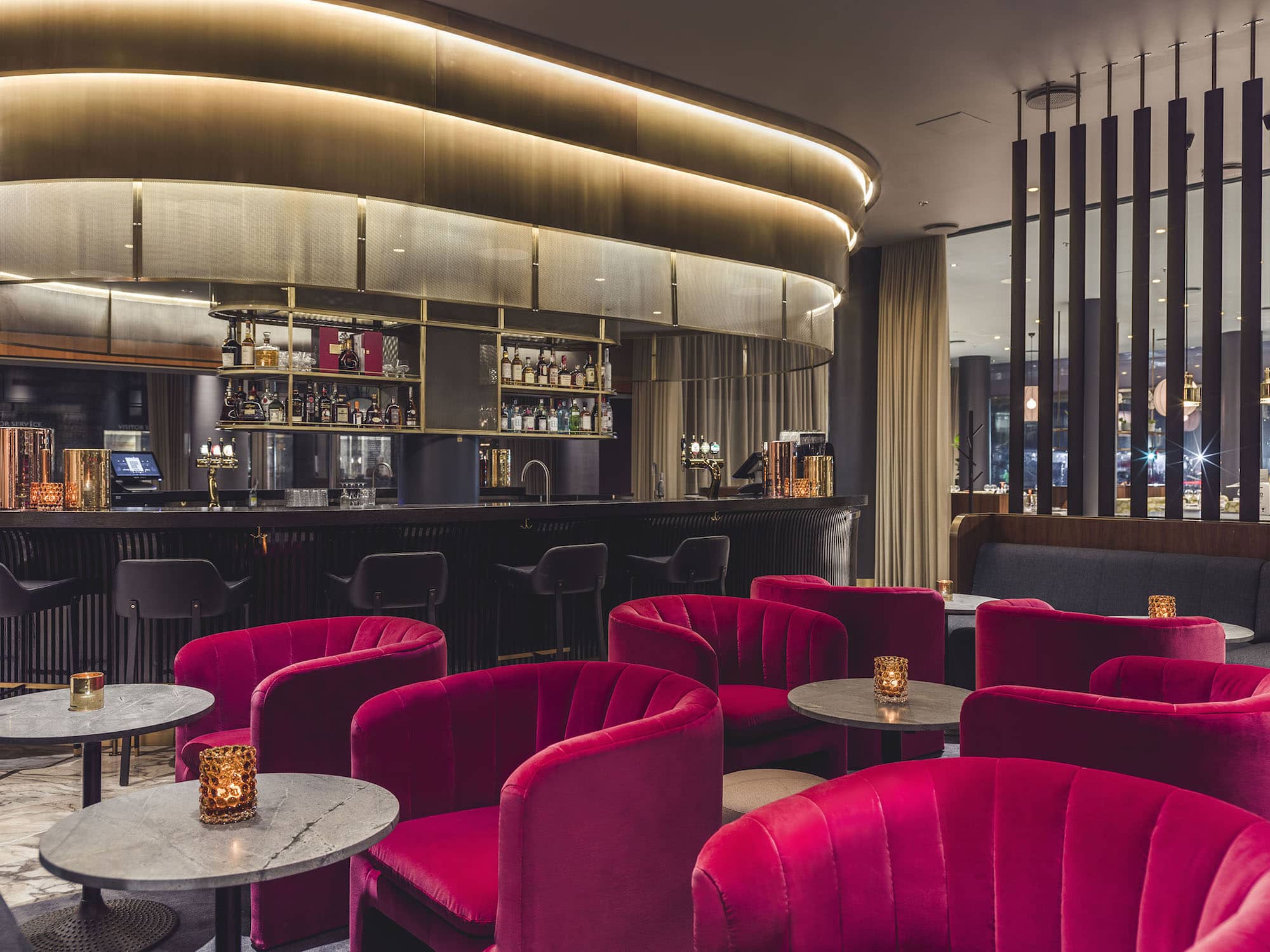 Preserved scratches, caused by an old piano digging into the marble floors, add to the bar’s historic atmosphere. Darkened brass was incorporated above the bar in a tier formation, which contributes to the space’s classic feel along with black bar stools by Stellar Works and plush red velvet chairs by &tradition in the adjoined bar lounge. Adding a modern touch, rounded lanterns above the tables in the restaurant are by Danish brand Made by Hand. 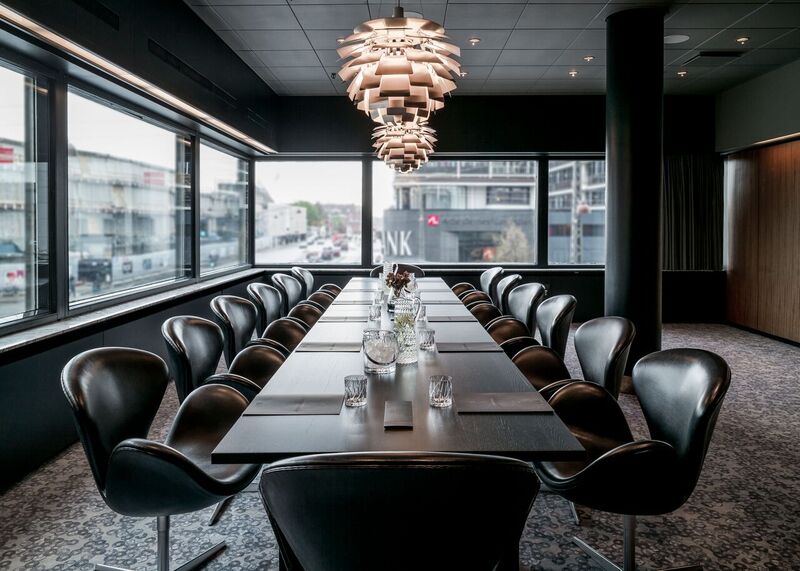 From the Egget to the Oxford, all of the hotel’s first-floor meeting rooms have been named after Jacobsen’s design classics. Design details in each include his clocks and mirrors, original artwork pulled from the basement and reframed and Nero Marquina credenzas in tribute to Jacobsen’s use of the material throughout the hotel.

The two Swan boardrooms are the largest suites. Tucked into a long oak table by Danish design designer Cecilie Manz are 13 bespoke Swan chairs. Their heights have been raised to enhance comfort and to fit the table. Two Louis Poulsen PH Artichoke lights hang above. However, it is the corner rooms’ panoramic views that take center stage. Wraparound windows reflect Jacobsen’s love of light and nature. He brought the outside in. 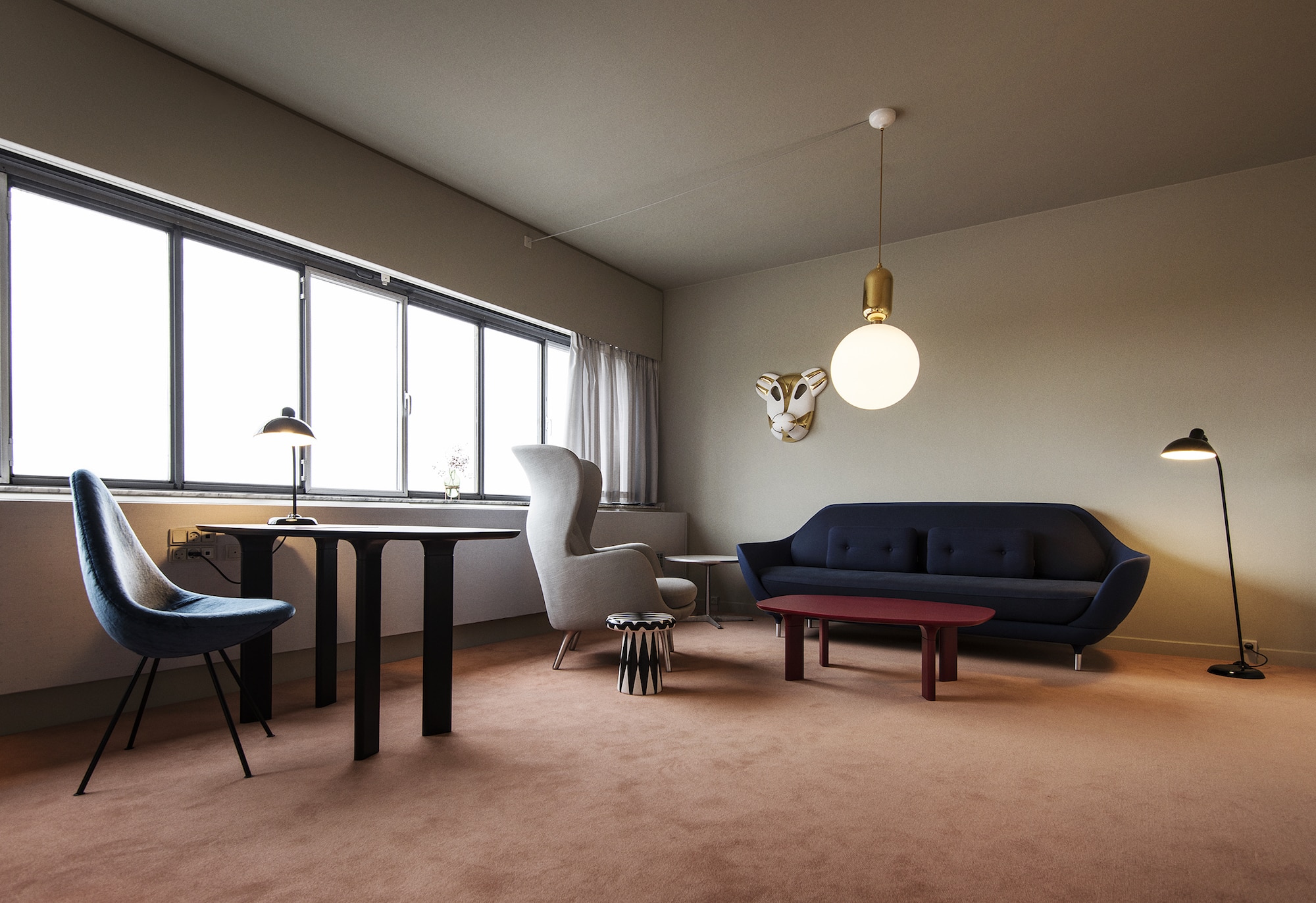 Boundary-pushing creator Jaime Hayon designed this special suite. Following in the footsteps of Jacobsen, Hayon implemented a total design for the room. Bespoke furnishings were created in collaboration with Fritz Hansen. His artworks on the walls include a drawing above the bed and a ceramic animal mask above the sofa.

Hayon designed all lamps and accessories — including the drum-like ceramic T Table manufactured by Bosa — as well as the bedspread that features graphic detailing. Paying further homage to Jacobsen, Hayon brought in a Drop chair upholstered in blue velvet and a neutral Swan chair. Room 506 is contemporary Mediterranean design meets Danish modernism. 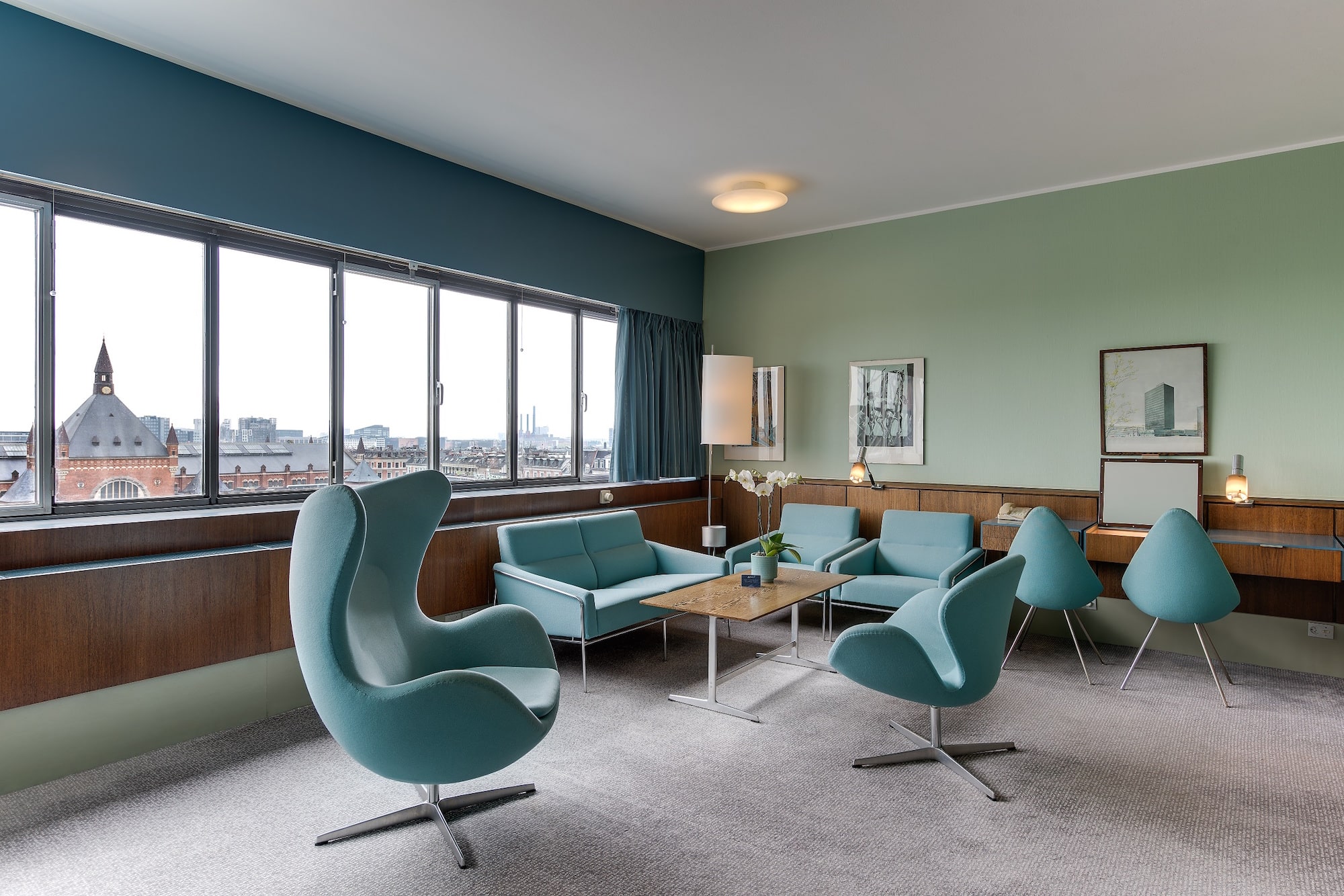 Of the hotel’s 260 guest rooms, number 606 is the most revered. The sixth-floor icon of Danish modernism has been maintained as a 1960 time capsule to showcase Jacobsen’s handiwork. The soothing blue color scheme was inspired by nature.

Original furniture upholstered in blue includes Jacobsen’s 3300 sofa and chairs and his most famous Swan, Egg and Drop chairs — all designed specifically for the hotel. Jacobsen claimed the latter as his favorite because his wife adored it.

A testament to Jacobsen’s emphasis on function as well as form, bedside tables offer two heights. Lights along the room’s original wood-paneled walls are on a track so they can be moved as needed. In his down-to-the-detail approach, Jacobsen put a wire in the curtain seams to create a wavy shadow when light filters through the window.