H 39 in. W 21 in. D 100 in.
Antique French Console Table or Sofa Table or? Absolutely All Original Paint
Located in Chicago, IL
Antique French console table, sofa table or? Our belief is, that this antique French table was probably used in a commercial application, possible as a desk, where you might register...
Category

H 34.5 in. W 47.25 in. D 15.5 in.
Antique French Inlaid Ormolu Mounted Console Table
Located in London, GB
A stunning French console table, beautifully made from mahogany, which I would date from around the 1920-30’s period. It has a gorgeous shape and is a useful size. The top has a s...
Category

H 32 in. W 41 in. D 19 in.
Antique French Style Gilt Wood Console Table
Located in London, GB
A beautiful gilt wood console table, in the antique French rococo style. This dates from around the 1950-60’s. It is very well made and is in excellent condition for its age. The ...
Category

H 31.25 in. W 35.5 in. D 12 in.
Antique French Provincial Console
Located in Great Barrington, MA
Constructed in light brown wood, the veined false marble top is painted on wood in colors of rose, peach and light brown. The console has four legs, the two front ones are front-fac...
Category

H 30.5 in. W 47 in. D 21 in.
Antique French Provincial Console
Located in Great Barrington, MA
Constructed in light brown wood, the veined false marble top is painted on wood in colors of rose, peach and light brown. The console has four legs, the two front ones are front-faci...
Category 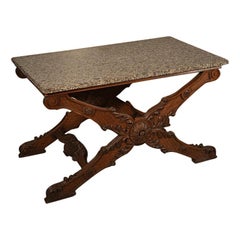 H 37 in. W 55.75 in. D 25 in.
Antique Belgian Whitewashed Console Table
Located in High Point, NC
An oak console table with drawer and shelves from Belgium, circa 1900. A stabile design features a solid base, connected with columns to an upper shelf and tabletop, carved from dura...
Category

H 33 in. W 58 in. D 26 in.
Antique French Wrought Iron and Marble Console
Located in New Orleans, LA
This is a beautiful little console.
Category

H 36.75 in. W 57 in. D 20.5 in.
Rare Antique French Hand Carved Giltwood & Marble Console Table circa 1860 Paris
Located in London, GB
We are delighted to offer for sale this lovely French giltwood with black marble top console table circa 1860 Paris A very good looking and well made piece with nice gilding to th...
Category

H 32.88 in. W 41.15 in. D 14.77 in.
Antique French Regence Style Console Table with Front Drawer and Hoof Feet
Located in Dallas, TX
There are some delicate and unique features to this Regence style walnut wood console table from France, circa 1860. It combines period design elements, with a thoughtful and discree...
Category

H 32.5 in. W 37 in. D 15 in.
19th Century French Antique Wrought Iron Console Server Table with Marble Top
Located in Shippensburg, PA
An unusual work of art in wrought iron, this twisting form is massive with a full width of over 105”. It retains an original rouge marble top cut from a single slab of the thick ston...
Category

H 32.25 in. W 32 in. D 16 in.
Antique French Walnut Marble-Top Demilune Console, circa 1900
Located in New Orleans, LA
A perfect console for any location.
Category

H 34 in. W 41 in. D 21.5 in.
Antique 19th cty French Gold Leaf Gilded Baroque Console Table with Marble Top
Located in Casteren, NL
This elegant Baroque console table or hall table was made in France, around 1870. The table has two legs built up from C scrolls and it is decorated with pearl beading, flowers and ...
Category

H 31.89 in. W 70.87 in. D 22.45 in.
Antique 17th Century Marble Console from Semur-en-Auxois, France
Located in Houston, TX
This 17th century marble console originally sat in the refectory of the "Couvent des Minimes" in the French village of Semur-en-Auxois. Flat on the back, this piece is the perfect co...
Category

H 36 in. W 61 in. D 24 in.
Antique Carved Giltwood and Pink Marble Console Table by Linke
By François Linke
Located in London, GB
Arguably the greatest craftsman of the 19th and early 20th century, French cabinetmaker, François Linke, is responsible for the design of this stunning console table. In his lifetime...
Category

H 33.08 in. W 36.62 in. D 16.15 in.
Antique Empire Console /Sideboard, around 1810
Located in Berlin, DE
Solid wood with veneer, partly gilded. Rectangular cover plate with an inconspicuous frame and S-shaped curly supports on carved claws, which are held in gold. The base is arched. Pa...
Category

H 31 in. W 24 in. D 13 in.
Antique Elegant Satinwood Console, circa 1870
Located in New Orleans, LA
This handsome console has a beautiful grey marble top in the mid-grey range.
Category

H 36.75 in. W 50.5 in. D 22.25 in.
French-Polished Console in Antique Hardwood with Bronze Base by P. Tendercool
By Pieter Compernol & Stephanie Grusenmeyer
Located in Bangkok, TH
If ever there is a modest "look mummy what we can do!" appropriate, this might be the case. This table was commissioned by a collector based in Munich, Germany. He came to our galler...
Category

H 31.89 in. W 73.23 in. D 13.78 in.
French Antique Pair of Shapely Carved and Painted Consoles with Faux Marble Tops
Located in Atlanta, GA
A French pair of carved and painted wood console tables, with faux-marble tops, from early 20th century. This antique pair of tables from France feature an oblong shaped top with fla...
Category

H 35.25 in. W 33.25 in. D 14.75 in.
French Carved Walnut Antique Louis XV Game Table
Located in Hopewell, NJ
A beautifully carved French Louis XV or Rococo style walnut card table which can either be used as a narrow console table or when open seats 4 people for games or card play. The top ...
Category

H 31 in. W 38 in. D 22 in.
French-Polish Console in Antique Hardwood, Bronze Base by P. Tendercool in Stock
By Pieter Compernol & Stephanie Grusenmeyer
Located in Bangkok, TH
SALE we are currently renovating our showroom and will accept a 30% reduction offer on lusted price. We created this jewel (our unbiased opinion) because we wanted to challenge ours...
Category

H 21.26 in. W 55.91 in. D 21.26 in.
Antique Forged Iron and Gilt Tole Console Table with Marble Top, circa 1850
Located in Dallas, TX
Vertical bars in front of console are temporary display supports due to back wall instability (not part of console table) From France, this magnificent hand wrought iron, marble a...
Category

H 27 in. W 37 in. D 21.5 in.
French LXV Style Dressing Table Finished in Antique White
By La Maison London
Located in London, GB
Made in the French LXV style, this dressing table has been hand carved in solid wood by La Maison London featuring the ornamental shell, scroll and S curve of the Rococo period and h...
Category

How Much are Antique French Console Tables?