Nr Table
Tree Form
Black Leather
80s Table
Cf Modern
Eames Black
Riveted Table
Art Deco Small Table
Price
Shipping Options
Sort By
I-Tube Black Coffee Table
By Da A
Located in Milan, IT
Stunning in its sleek and simple silhouette, this coffee table is entirely made of steel and is composed of two elements: a cylindrical base supporting a superb round top. Boasting a...
Category 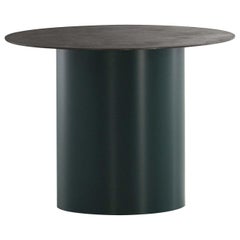 H 17.92 in. W 23.63 in. D 23.63 in.
Ecate Black Coffee Table
By Inthegarden
Located in Milan, IT
Named after Hecate, the Greek goddess of magic and the night, this coffee table is marked by a striking combination of elegant and dark hues, contrasting textures, and refined materi...
Category

H 16.93 in. W 35.44 in. D 35.44 in.
Ecate Black Coffee Table
By Inthegarden
Located in Milan, IT
An impeccable balance of pure volumes and conflicting materials defines the design of this captivating coffee table named after the ancient Greek goddess of the waning moon. Featurin...
Category

H 7.88 in. W 27.56 in. D 27.56 in.
Qwerty Black Coffee Table
By Attivissimo
Located in Milan, IT
Inspired by the keyboard design, this modern coffee table is a homage to mankind's ability to communicate through symbols. The two legs support and wrap around the top like brackets,...
Category

H 13.78 in. W 32.29 in. D 21.66 in.
Washington Black Coffee Table
By Elli Design
Located in Milan, IT
This coffee table was made by hand by expert artisans, and the curvature of its base is meant to evoke the dome of the capitol, finished in matte black (also available in matte white...
Category

H 14.57 in. Dm 19.69 in.
Joy Black Coffee Table
By Elli Design
Located in Milan, IT
This piece is an elegant coffee table whose iron structure is dominated by curved lines. It infuses in any room a sense of lightness and modern simplicity that will make it a strikin...
Category

H 14.18 in. Dm 23.63 in.
Liz Black Coffee Table
Located in Paris, FR
Coffee table Liz black with metal structure in gold finish. With up and down black marble top. Also available with up and down white marble top.
Category

H 15.75 in. W 17.72 in. D 17.72 in.
Black Coffee Table with Horn Inlays, France, 1970s
Located in Frankfurt / Dreieich, DE
Black coffee table with brown and black horn inlays framed in a brass frame. The base and the edge are with black lacquer. The table dates back to France in the 1970s, A very beauti...
Category

H 16.54 in. W 39.38 in. D 39.38 in.
Ibūki Black Coffee Table by Giannella Ventura
By Via Rossini Milano
Located in Milan, IT
All elements of this coffee table convey a dramatic visual effect that will suit a contemporary and eclectic interior decor. Entirely finished in deep black, the open tubular steel b...
Category

H 18.9 in. W 53.15 in. D 31.5 in.
French Solid Brass and Black Coffee Table
Located in Chicago, IL
Vintage French coffee table, circa 1960. The one shown here has been left with its original patina intact while the other table has been hand-polished to a brilliant finish. Superb q...
Category

H 15 in. W 47.33 in. D 47.33 in.
Pluto Black Coffee Table by Ben Barber Studio
By Ben Barber Studio
Located in Firenze, IT
A coffee table suitable for both indoor and outdoor use. The base is constructed from two hand spun hemispheres perfectly married together. The top is secured via an oversized bolt. ...
Category

H 13.78 in. W 48.43 in. D 41.74 in.
White and Black Coffee Table by Pierre Bonnefille
By Pierre Bonnefille
Located in Madrid, ES
Coffee table by the Pierre Bonnefille workshops, rectangular top wrapped with tulle and painted over. Black lines crossing on a white background. Black feet. About the designer: P...
Category

H 157.49 in. W 263.78 in. D 188.98 in.
Geometric Black Coffee Table from Rocky Collection by Joel Escalona
By Joel Escalona
Located in Mexico City, MX
Rocky, a little expression of domestic rebellion, somewhere between disruption and innovation. A new way of protection for our goods. Rocky coffee table is part of Rocky collection d...
Category

H 9.85 in. W 31.5 in. D 31.5 in.
"Twins" Polished Black Coffee Table Contemporary Design by Giordano Viganò
By Giordano Viganò
Located in Novedrate, IT
Twins are two coffee tables made of polished black wood that can be placed one above the other. They are available in three different colors: black, Bordeaux and green. The minimal s...
Category

H 31.5 in. Dm 15.75 in.
Stoned Petrified Wood Black Coffee Table on Stainless Steel Base
Located in Paris, FR
Coffee table stoned petrified wood black with polished stainless steel base. Petrified wood has turned into stone. Trees have been buried for many years under sediment they transi...
Category

H 25.6 in. Dm 27.56 in.
Gotham Black Coffee Table, Designed by Leonardi & Marinelli, Made in Italy
By Leonardi & Marinelli
Located in Beverly Hills, CA
Scroll down and click "view all from Seller" to see more than 400 other unique products. The Gotham table collection, with its simple form, is made of a console, coffee table and si...
Category

H 16 in. W 36 in. D 54 in.
JOLE 21th Century Contemporary Black Coffee Table in Marble, Oak Wood & Brass
By Wim Yanov
Located in Berlin, DE
JOLE is the first small contemporary object, which will be introduced to the collection of Studio One Plus Eleven. Although so small, the black coffee table introduces a range of un...
Category

H 17.52 in. W 38.19 in. D 38.19 in.
Black Coffee Table in Chrome and Smoked Glass Romeo Rega Style Italy, 1970s
By Romeo Rega
Located in Rome, IT
Rectangular coffee table in Romeo Rega style made of chrome coated in black and smoked glass, Italy, circa 1970.
Category

H 14.57 in. Dm 51.19 in.
Set of Three Mid-Century Metal and Glass Black Coffee Tables with Hairpin Legs
Located in Schagen, NL
These coffee tables are stackable but can also be used next to each other. Some resemblance with designs of Arnold Buena de Mesquita and Sapority. They feature a black metal frame wi...
Category

H 18.12 in. Dm 34.65 in.
Black Glassy Coffee Table
By Abhika
Located in Milan, IT
The simple, stylized design of this clean-lined coffee table makes it perfect for a variety of palettes and styles. The chromed metal structure is enhanced by the black lacquered gla...
Category

H 15.75 in. Dm 47.25 in.
Black Chinoisere Coffee Table
Located in Dallas, TX
An elegant Chinese screen made into a coffee table. This table is black with gilt chinoiserie and all-over landscapes with figures and buildings with floral edge on straight leg base...
Category

H 17 in. W 67 in. D 22 in.
Black Hexagonal Coffee Table
By Zanaboni
Located in Milan, IT
Subverting traditional design norms, this Minimalist side table will add a bold touch to any interior with its distinctive design. The hexagonal frame is masterfully crafted of solid...
Category

H 15.75 in. W 22.84 in. D 19.69 in.
Donald Coffe Table in Black
By Chapel Petrassi
Located in Firenze, IT
Donald is a multifunctional table which has a sculptural and cosmic. Donald slots into the real space by interacting colors and forms in an astral dimension.
Category

H 30.52 in. Dm 55.12 in.
Rectangular Oscar Coffee Table Black
By Guerra Vanni
Located in Milan, IT
This exquisite coffee table is expertly crafted from solid wood, pairing a rectangular top with elegantly tapered legs. Offering a subtle fusion of modern and traditional styling, it...
Category

H 13.78 in. W 47.25 in. D 47.25 in.
Verso Coffee Table, Black Oakwood
Located in Zapopan, Jalisco
The sleek metaphor in our Verso side table broadens to create an elegant yet functional coffee table inspired by the organic nature and rhythm of its four wooden rods x shaped base t...
Category

H 19 in. W 40 in. D 33 in.
Coffee Table 'I' in Black Terrazzo
By Bentu Design
Located in Paris, FR
'I' is a collection of tables: coffee / side tables, dining tables, bar tables. The base and the structures are in steel, and the tabletop is in terrazzo. by Bentu design Man...
Category

Coffee Table 'I' in Black Terrazzo

H 13 in. W 40 in. D 21 in.
Black Walnut Coffee Table with Aluminium Inserts black
By Bois & Design
Located in Quebec, CA
This coffee table is a live edge black walnut slab which was stained black. We have added three aluminium strips lengthwise. The legs are U shape aluminium base. Keep in mind we can...
Category

H 16 in. W 18 in. D 36 in.
The Guardian Coffee Table Total Black
By Silvia Musetti
Located in Milan, IT
This sleek, modern coffee table features a unique raised side wing that hides drinks, snacks or other objects from view, adding an aura of playful mystery in any environment. Its tex...
Category

How Much is a Black Coffe Table?

A black coffe table can differ in price owing to various characteristics — the average selling price 1stDibs is $3,616, while the lowest priced sells for $30 and the highest can go for as much as $89,500.