H 21 in. W 28 in. D 18 in.
Oval Tri-Leg Base Polished Copper Jacket Low Coffee Table
Located in Paris, FR
A timeless nature, combined with a distinct appreciation of bold polished material finishes combine in the design of the future oriented aesthetic of the 2069, table. This piece is m...
Category

H 19.3 in. W 38.59 in. D 16.54 in.
Short Oval Coffee Table
By A.R. Arredamenti
Located in Milan, IT
An eclectic and versatile piece of functional decor, this short coffee table boasts a symmetric silhouette marked by an oval base and an oval top. The structure is crafted of open-po...
Category

H 15.75 in. W 51.19 in. D 35.44 in.
Dolcevita Oval Coffee Table
By Galimberti Nino
Located in Milan, IT
Defined by formal simplicity and midcentury inspiration, this coffee table combines elegance with functionality. Entirely handcrafted of wood with ash veneer and an ebonized finish, ...
Category

H 16 in. W 56 in. D 23.5 in.
Dedalo Oval Coffee Table
By Volpi
Located in Milan, IT
This elegant coffee table features a structure in ashwood with a natural finish. From its oval base a series of four vertical elements stems on four sides, supporting the oval top in...
Category 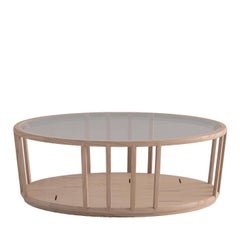 H 19.25 in. W 39.25 in. D 21 in.
Pink Travertine Oval Coffee Table
Located in Armonk, NY
This piece was created by NVT Studio from the highest quality remnant stone, and is the only one in existence. Threads of pink layer with white and silver hued marble on this oval sh...
Category

H 14.5 in. W 38 in. D 19.5 in.
Dark Wood Oval Coffee Table
Located in Brooklyn, NY
This medium-sized coffee table features a rich color with bold grain patterns. It is simplistic in design but has striking patterns throughout. This piece is made from teak wood; whi...
Category

Oval Coffee Table with Lucite Base

H 15.5 in. W 59 in. D 20 in.
Pair of Mastercraft Oval Coffee Tables
By Mastercraft
Located in Lambertville, NJ
A diminutive pair of Mastercraft patinated brass and glass oval coffee tables. The gently splayed bamboo motif legs with X-stretcher bases. Priced for that pair but if you are intere...
Category

H 16.5 in. W 29 in. D 17.5 in.
Silver and Glass Oval Coffee Table
Located in Livingston, NJ
Elegant silver metal and glass oval coffee table. This designer table features an ornate scroll metal base which is silver with soft gold accents. The oval glass top is beveled and i...
Category

H 21 in. W 49 in. D 37 in.
Elegant Gilt Metal Oval Coffee Table
Located in Atlanta, GA
Elegant gilt metal oval coffee table, probably American, circa 1960s. The glass top has some scratches and you may prefer to get a replacement glass cut top on your end, which would...
Category

H 11 in. W 59 in. D 25.25 in.
Oval Coffee Table by Arturo Pani
By Arturo Pani
Located in Mexico City, CDMX
We offer this coffee table in brass and wood with spectacular design by Arturo Pani, circa 1960.
Category

H 19.89 in. W 47.25 in. D 23.63 in.
Isabella Costantini, Italy, Tullia Oval Coffee Table
By Isabella Costantini
Located in Ascoli Piceno, IT
Designed by IC and skilfully crafted by expert Italian artisans, the Tullia coffee table features an oval glass top laying on a wood crossed base. It is enriched by a precious, elega...
Category

H 10.5 in. W 37 in. D 61.5 in.
Triangolo Oval Coffee Table by Ivano Colombo
By Annibale Colombo
Located in Milan, IT
The enchanting aesthetic defining this coffee table in Canaletto walnut makes it a sophisticated gathering point. Two angular elements intersect at the base to create a sturdy cross ...
Category

H 14.97 in. W 59.06 in. D 35.44 in.
Blake Oval Coffee Table with Oakwood Top
By Bodema
Located in Milan, IT
A clean, essential design marks this simple yet stunning coffee table. Its large, oval top is crafted of smoked oak with a brown finish and superbly rests on a metal base featuring t...
Category

H 21 in. W 33 in. D 25 in.
Neoclassical Wood and Brass Oval Coffee Table, circa 1940
Located in Marcq-en-Baroeul, FR
This neoclassical oval coffee table is made of cherrywood. The top of the table is surrounded by a nice brass gallery. The cocktail table also has a nice brass stretcher as well as b...
Category

H 15.5 in. W 51 in. D 24.5 in.
Brass Race Track Oval Coffee Table by Labarge
By La Barge
Located in Chicago, IL
Classic design by Labarge. Race track oval glass, with ogee edge, on a brass base with four half oval stretchers creating a diamond pattern in the centre. Glass is clear, not smoked,...
Category

H 18.12 in. W 51.19 in. D 31.5 in.
Blake Oval Coffee Table with Calacatta Marble Top
By Bodema
Located in Milan, IT
The stunning oval top of white Calacatta marble stands out as statement feature of this refined coffee table. Resting on sturdy metal legs with feet and a matte pewter finish (also a...
Category

H 11.42 in. W 59.06 in. D 35.44 in.
Paradise Oval Coffee Table in Polished Stainless steel
Located in Paris, FR
Coffee table paradise oval in polished stainless steel and with polished brass inside. On wood structure. Also available in poplar root and brass and available in custom size and c...
Category

H 16 in. W 61 in. D 21.5 in.
Labarge Hollywood Regency Oval Coffee table With Scalloped Edge
By Labarge
Located in New York, NY
Hollywood Regency coffee or cocktail table designed by Labarge. The piece has a top with scalloped edges in brass around an oval glass top and sits on a chromed metal base. In great ...
Category

H 17 in. W 56 in. D 30 in.
Tensegrity Oval Coffee Table in Copper by Gabriel Scott
By Gabriel Scott
Located in Los Angeles, CA
Based on the structural concept of the same name, the Tensegrity series evokes a complex yet elegant style by intertwining contemporary lines with contrasting metallic elements. Intr...
Category

H 20.5 in. W 50 in. D 26 in.
Modern by Giuseppe Carpanelli Mistral Oval Coffe Table Canaletta Walnut
By Carpanelli
Located in Desio, IT
Coffee table in tapered shape with glass top. The structure is in Canaletta walnut. Base enriched with metal element in satn bronze finish.
Category

H 13.78 in. W 25.6 in. D 47.25 in.
'Black Lotus' Oval Coffee Table with glass element by Experimental
By EXPERIMENTAL
Located in Riga, LV
'Black Lotus' contemporary minimalist coffee table is defined as ‘art with function’. It consists of only three pieces that are held together by interlocking geometrical cuts without...
Category

H 14.97 in. W 46.86 in. D 22.05 in.
Tusk Oval Coffee Table, Contemporary Handmade Macassar Ebony and Glass
By Gregg Lipton
Located in Cumberland, ME
Timeless in in style and design. A transitional contemporary glass top coffee table working well in contemporary, modern or transitional settings. Our Tusk line of designs was origin...
Category

At 1stDibs, there are many versions of the ideal oval coffe table for your home. Each oval coffe table for sale was constructed with extraordinary care, often using metal, wood and glass. Find 188 options for an antique or vintage oval coffe table now, or shop our selection of 62 modern versions for a more contemporary example of this long-cherished piece. Your living room may not be complete without an oval coffe table — find older editions for sale from the 18th Century and newer versions made as recently as the 21st Century. An oval coffe table is a generally popular piece of furniture, but those created in Mid-Century Modern, Modern and Hollywood Regency styles are sought with frequency. You’ll likely find more than one oval coffe table that is appealing in its simplicity, but Madea Milano, Eero Saarinen and Casa Botelho produced versions that are worth a look.

How Much is a Oval Coffe Table?