Pierre Emile Lelong was born in the Paris suburbs in 1908. He began to draw and paint at an early age. In the 1920s, he took classes at the Atelier Julien in Paris. After a stint with an insurance company, he started to paint again in 1933 and took a studio in Montmartre. He first exhibited his work at the Salon des Indépendants in 1935, and as part of a group at the Galerie Rotgé. Lelong married Marie-Rose Salvatori, whose family came from Trinidad. When WWII broke out, he became a liaison officer for a British regiment. He was taken prisoner and spent his time sketching his fellow prisoners and the events in the camp. After at least one failed attempt at escape, he succeeded in 1942 and returned to France, where he turned his sketches into a book Une Vie de Camp, published in 1943. Lelong spent the remainder of the war in Trinidad with his wife’s family. During this period (1943–45), he worked on his painting technique, which had been interrupted by his earlier military service and professional career. He and his wife moved to New York City after the war, where their only son, Jean-François, was born. The family returned to France in 1947 when he produced illustrations for various journals, including Cavalcade, Paysage, La Pensée Française, Lisez-moi, Champs-Elysées, Paris-Dimanche and Fantasia as his work became increasingly well-known. Lelong spent most summers in the south of France and created a large body of work depicting boats, beaches, bathers and southern towns. He received the Grand Prix of the Peintres Témoins de Leur Temps in 1973 after a successful exhibit at the Galerie Minet. A retrospective of his work was mounted in 1974 in Nice at the Palais de la Méditerranée. His last major exhibition was at the Galerie d’art de la Place Beauvau in 1980, a series of works depicting the city of Paris. Lelong’s health began to fail the following year and he died on June 29th, 1984. Six months later, his only son was killed in a car accident in Morocco. 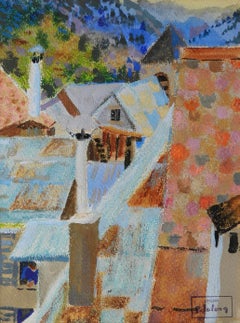 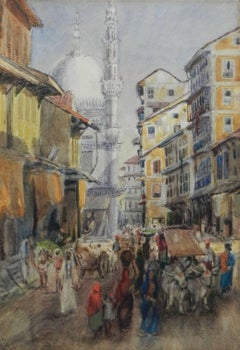 Pierre LeLong
"Lunch in the Marais" by Pierre Lelong, 1945

H 53 in. W 43 in. D 3 in.
Stopover in Port
By Pierre LeLong
Located in London, GB
'Stopover in Port' (Escale), oil on canvas, by Pierre Lelong (circa 1960s-70s). A ship replenishes its cargo in the early hours of the morning. The pier is abuzz with activity. Like ...
Category