Robert Angeloch was born in New York in 1922. He served in World War II in the Army Air Corps. From 1946 to 1951, he studied at the Art Students League of New York with Martin Lewis, Yasuo Kuniyoshi and others. He also studied at the Academy of Fine Arts, Florence, Italy and privately with Fiske Boyd in New Hampshire. While a League student he won the McDowell Traveling Scholarship and visited France, Italy, Austria and England. His prints and drawings have been included in exhibitions at the Metropolitan Museum of Modern Art, the Library of Congress, the Society of American Graphic Artists, the Museum of Modern art, the Wichita Print Annual, the Society of Washington Printmakers and elsewhere. He was artist-in-residence at Western Kentucky University in 1974 under a grant from the National Endowment for the Arts. He taught at the Art Students League of New York from 1964–79 and from 1968–2003 at the Woodstock School of Art, of which he was a cofounder. In 2012, Woodstock School of Art held a retrospective curated by his son, Eric, a painter in his own right.

"Night" Black and White Abstract Cubist Style Lithograph 3
By Robert Angeloch
Located in Houston, TX
Black and white cubist style lithiograph by New York artist Robert Angeloch. The print is framed in a silver frame with a white matte. The artist signed and titled the print in penci...
Category 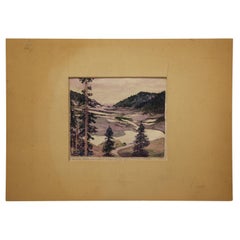 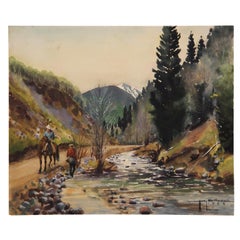 "Kemah" Seascape with Boats at the Dock
Located in Houston, TX
Category

perry
"Kemah" Seascape with Boats at the Dock, 1967

Previously Available Items
"Other World" Lithograph 22/50
By Robert Angeloch
Located in Houston, TX
Black and white abstract cubist style lithograph. The work is signed and titled in pencil. Framed in a light wood frame with a white matte, the piece has a Woodstock School of Art ta...
Category

H 22.5 in. W 28.5 in. D 2 in.
"Night Sky II" Black and White Abstract Aquatint 3/10
By Robert Angeloch
Located in Houston, TX
Black and white abstract Aquatint landscape print. The work is signed, titled and editioned by the artist in pencil. The piece is framed in a silver frame with a white matte. Attache...
Category

H 10.25 in. W 8.25 in. D .75 in.
Majestic Woodstock New York Impressionist Landscape Painting
By Robert Angeloch
Located in Houston, TX
Beautiful landscape painting by renowned artist and co-founder of the Woodstock School of Art. Robert Angeloch was born on April 8, 1922 in Queens, New York. He studied at the Art S...
Category