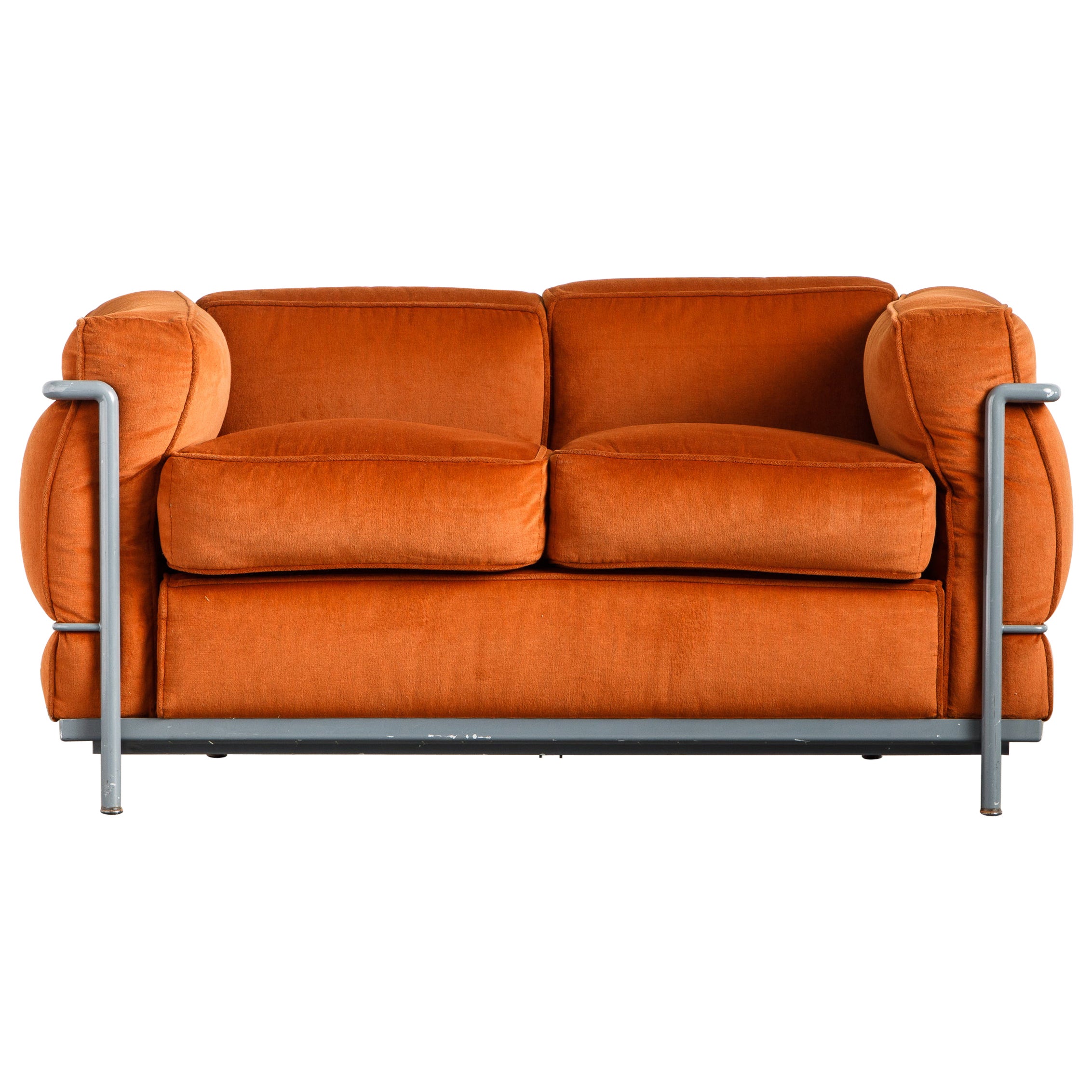 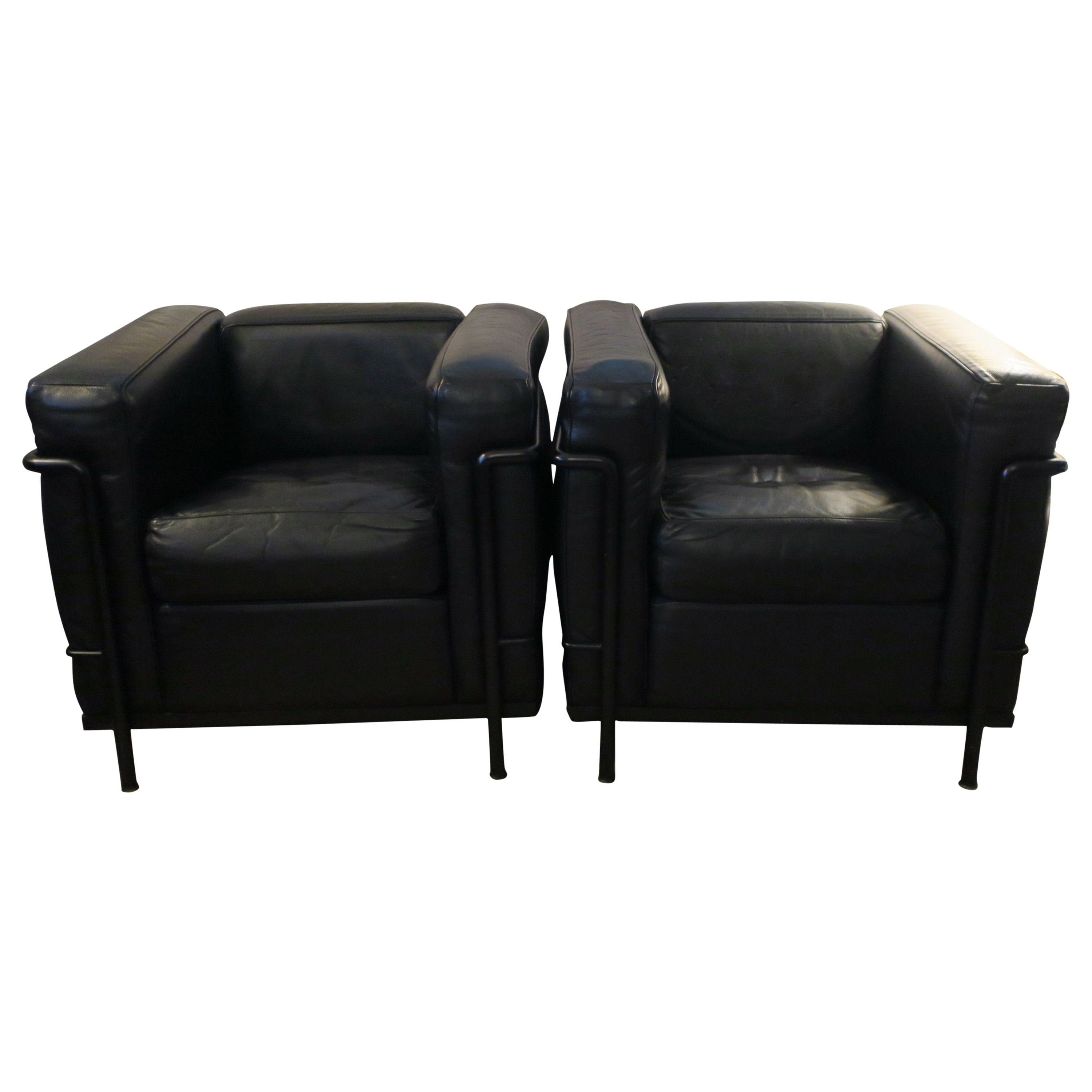 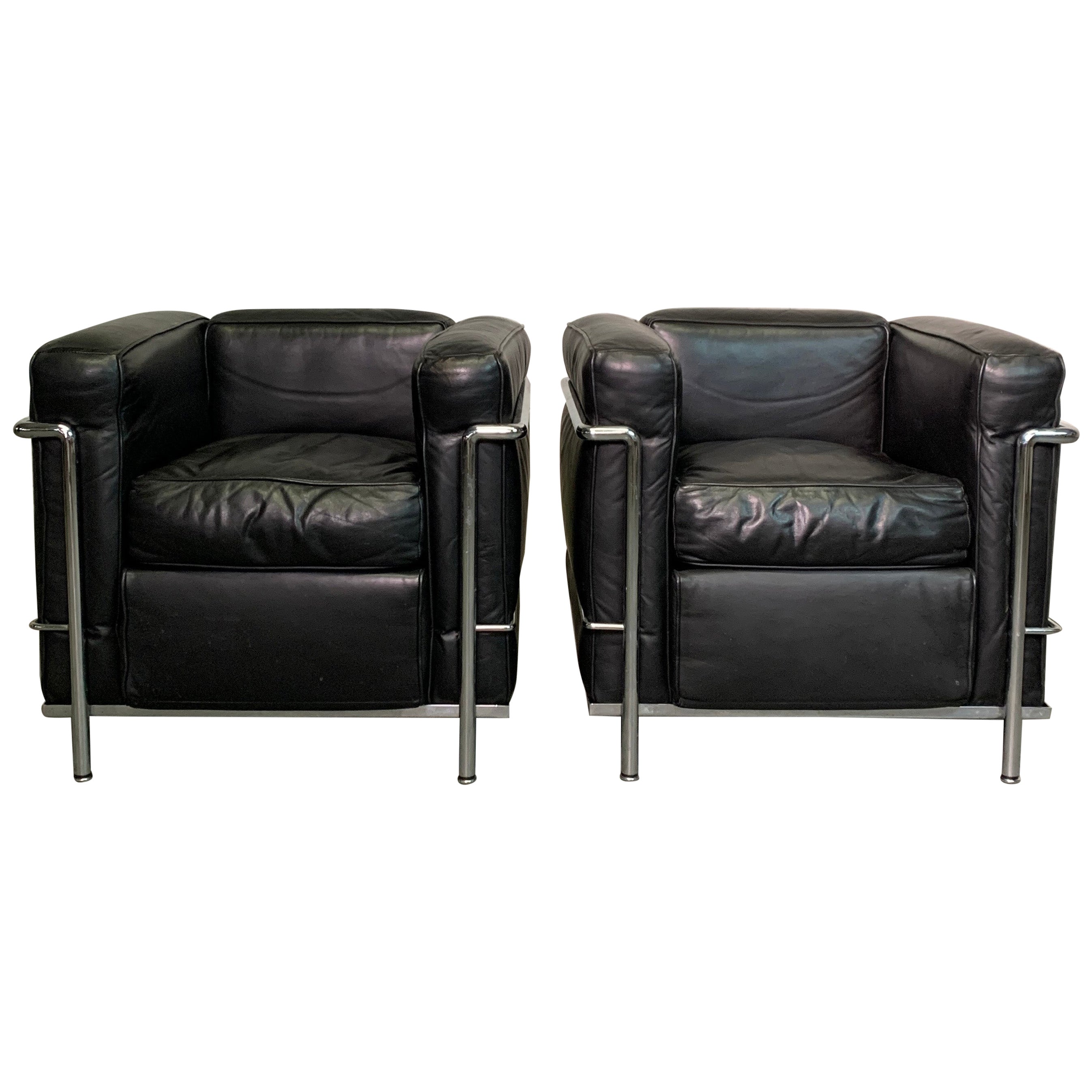 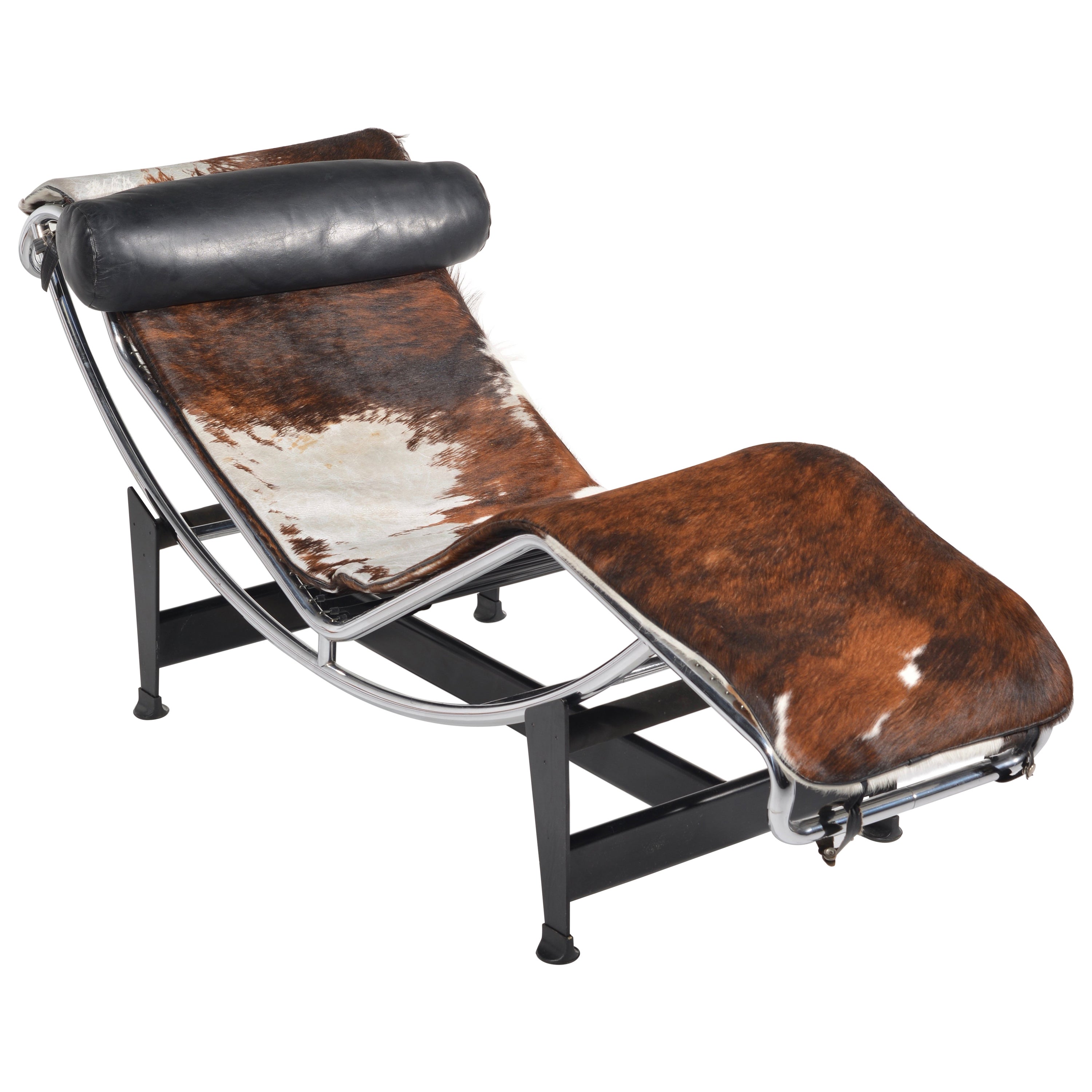 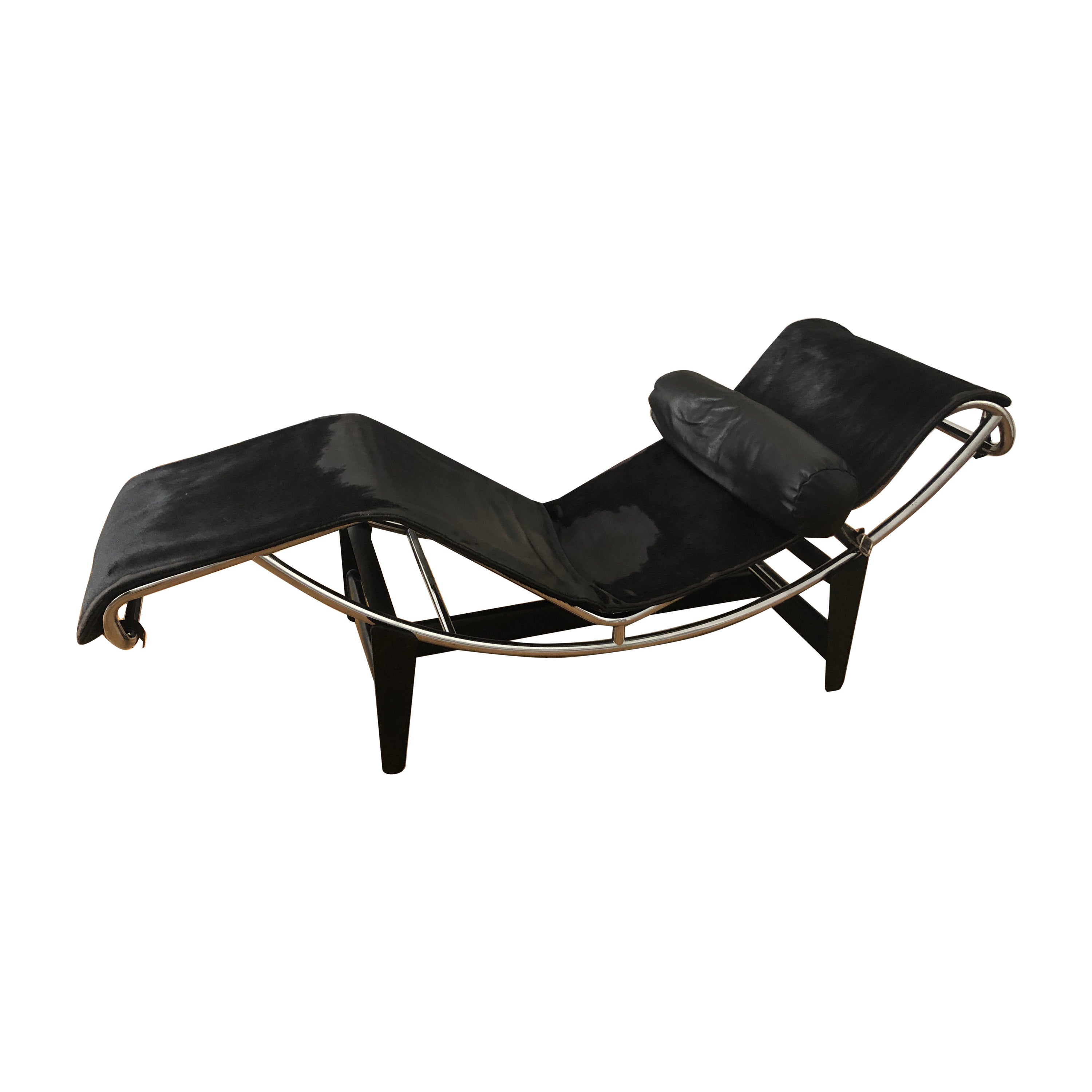 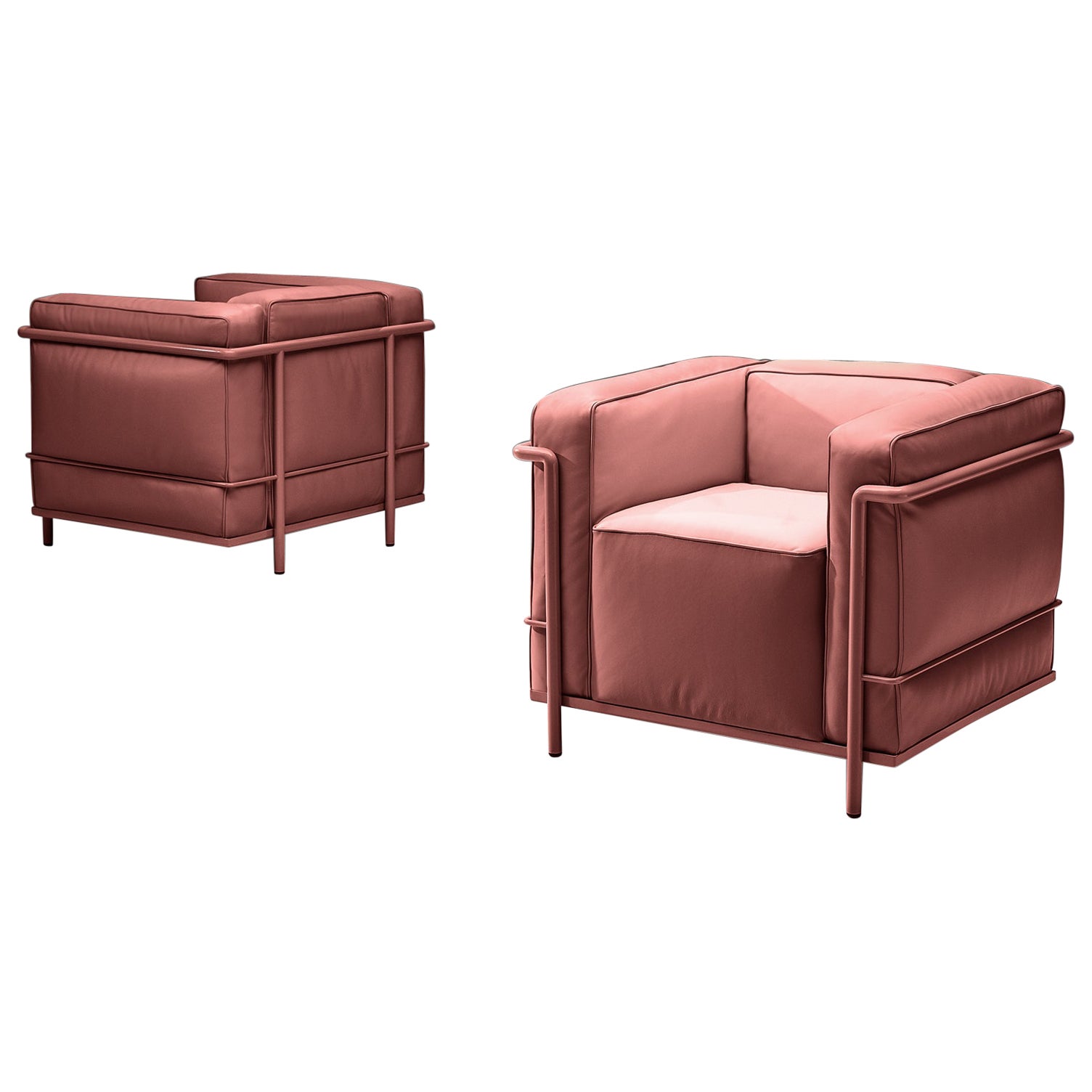 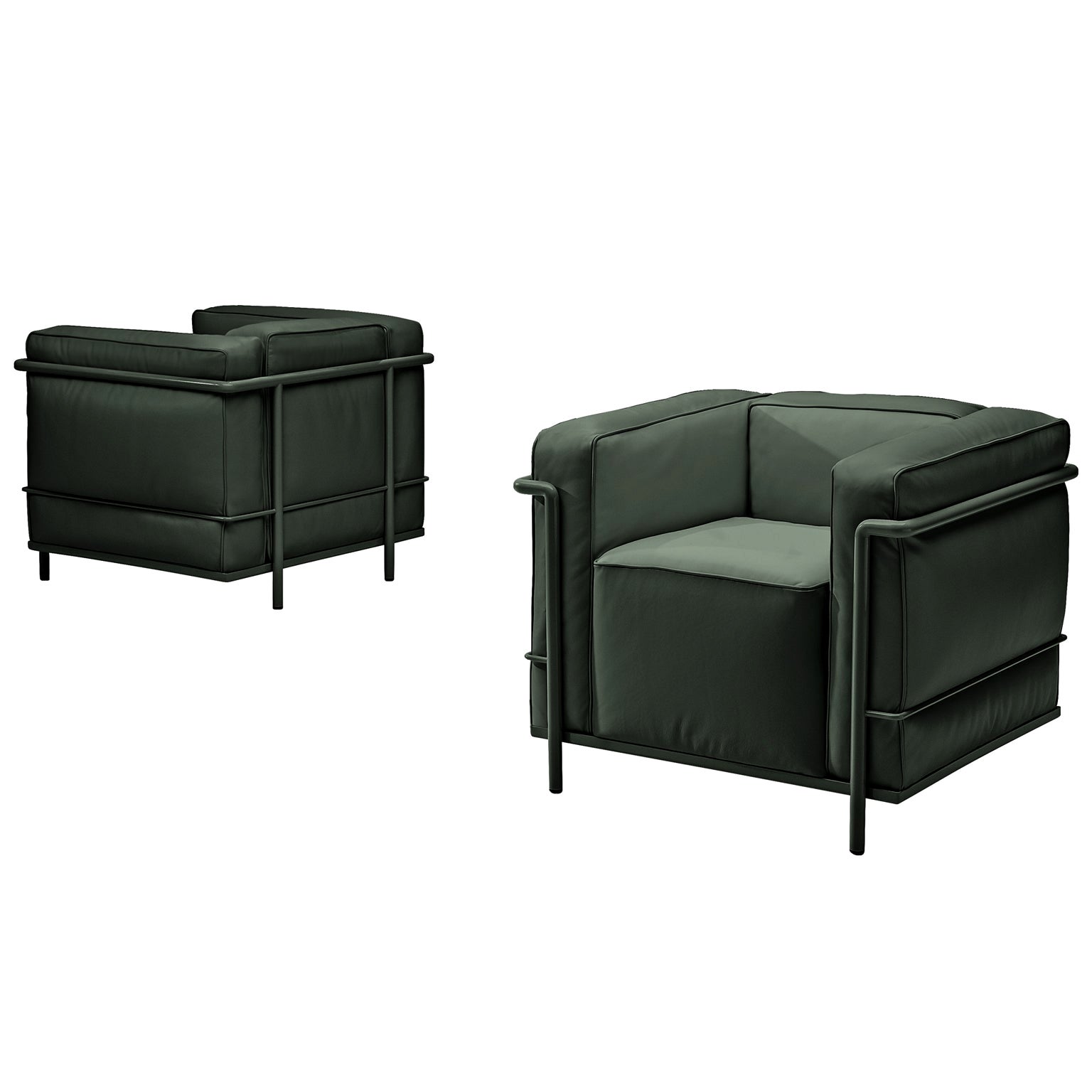 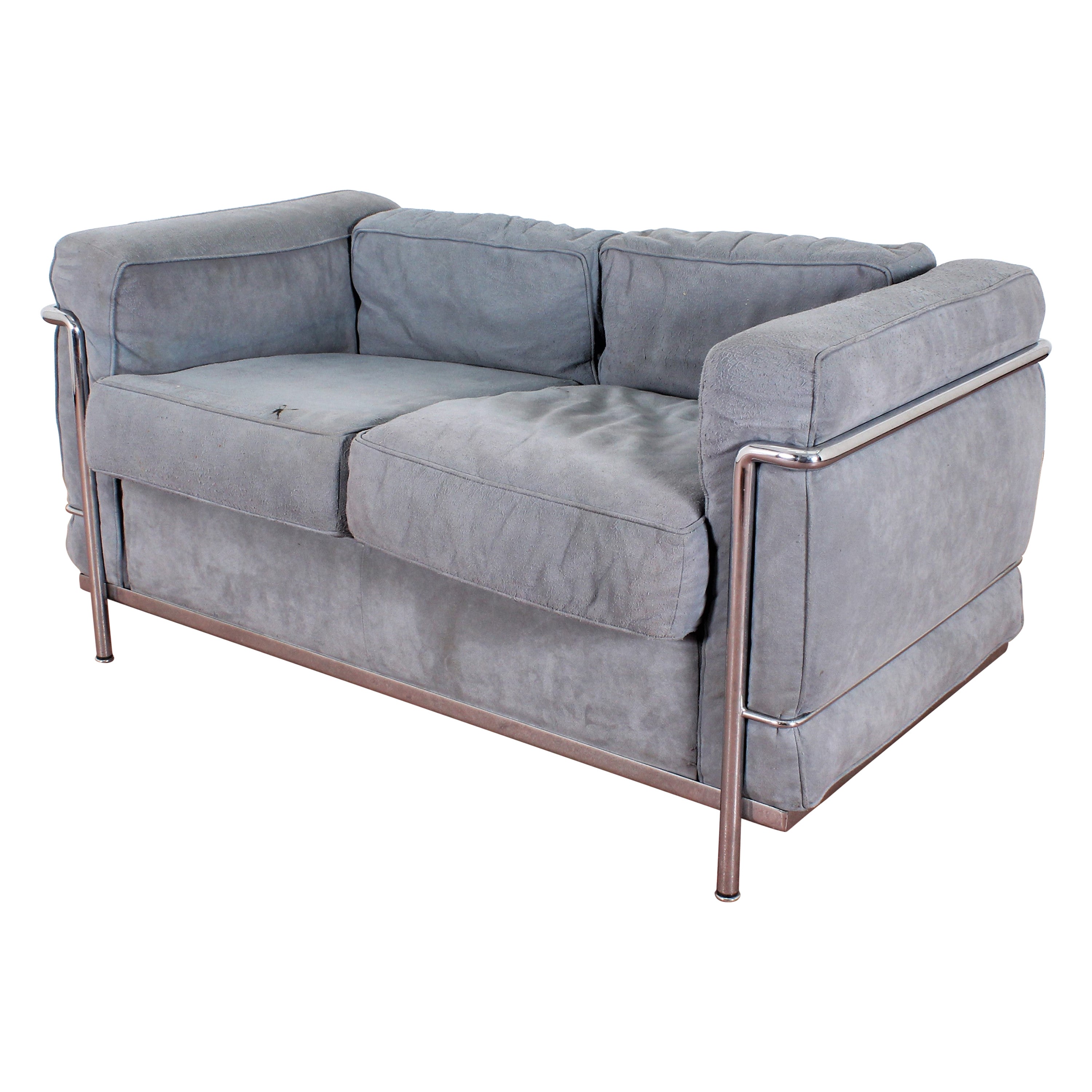 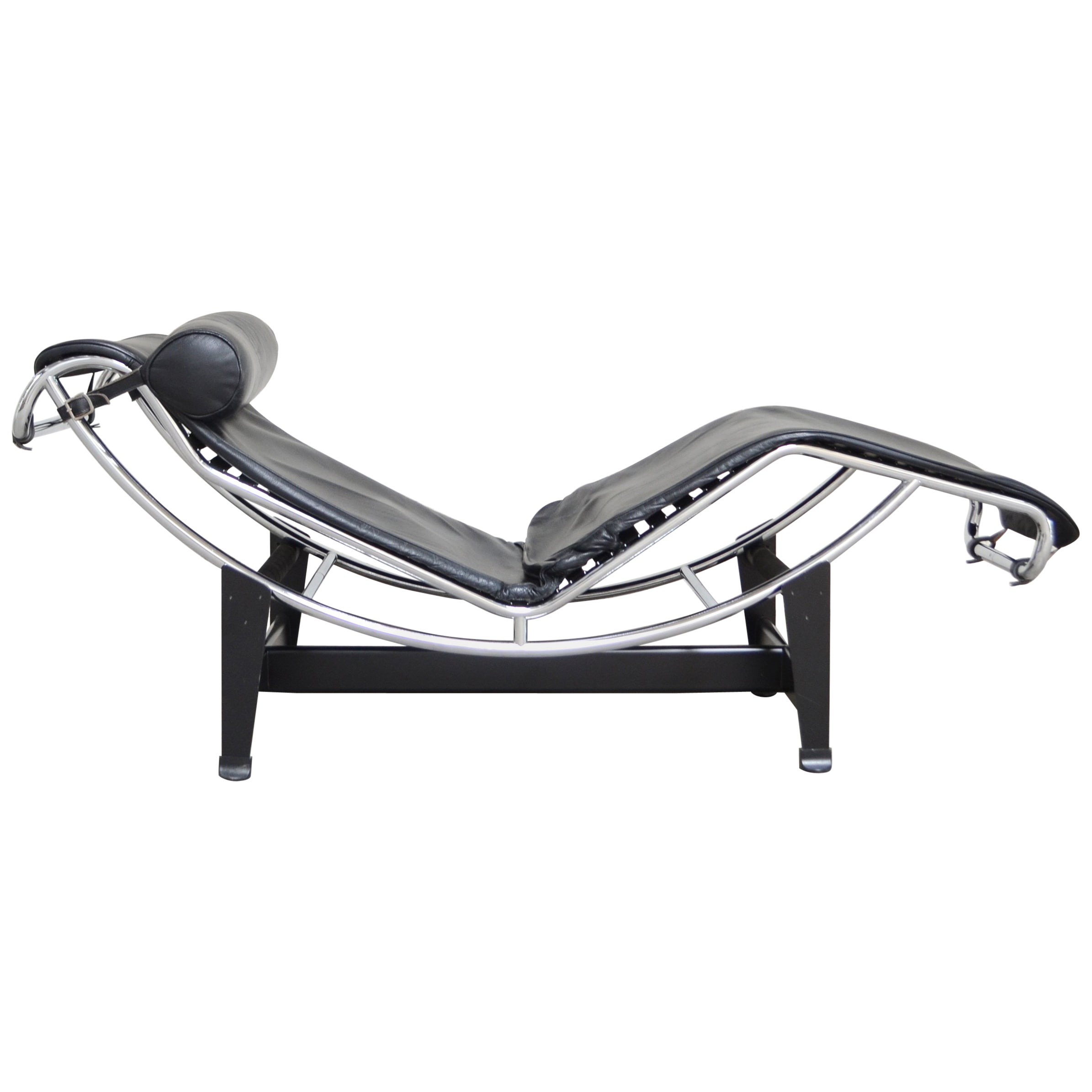 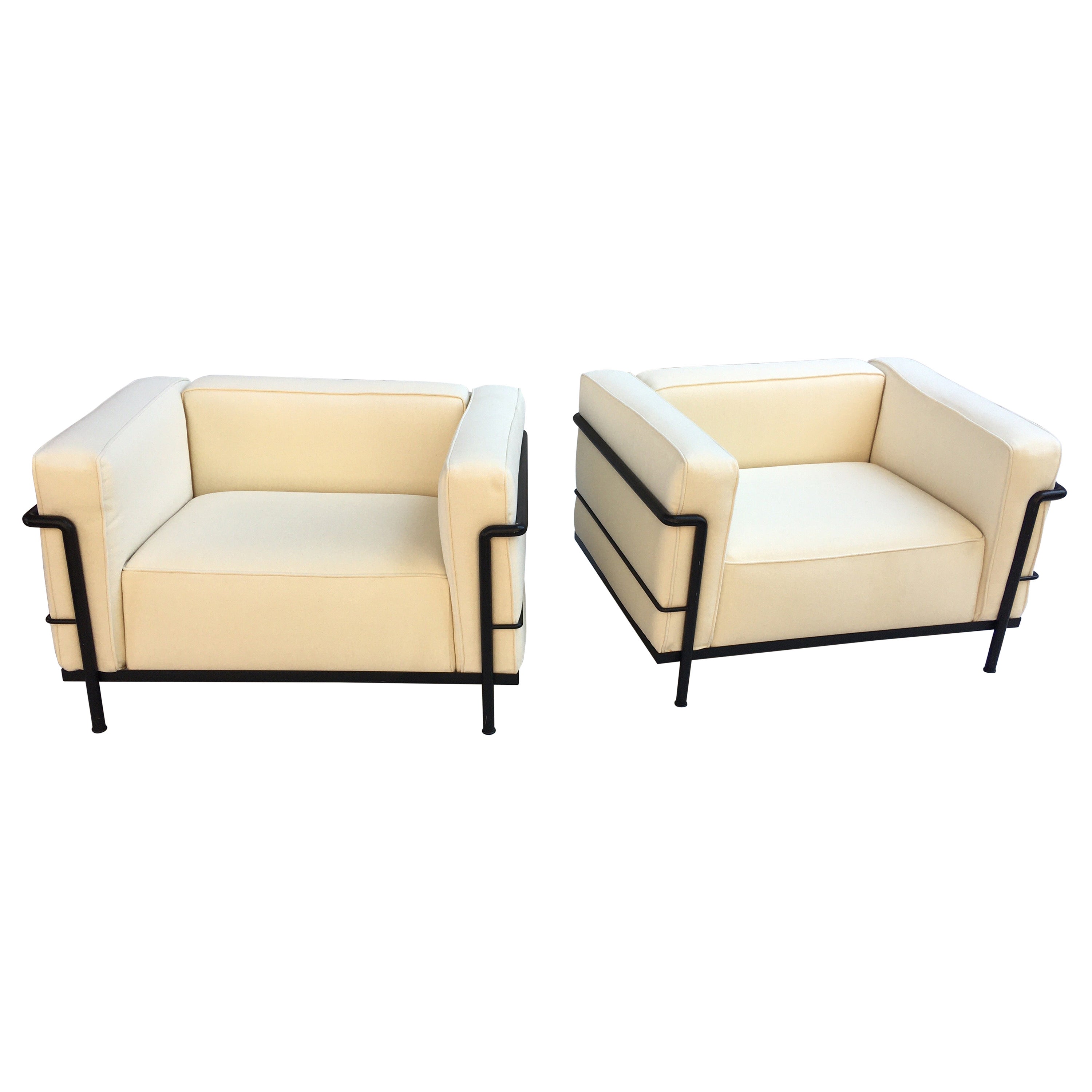 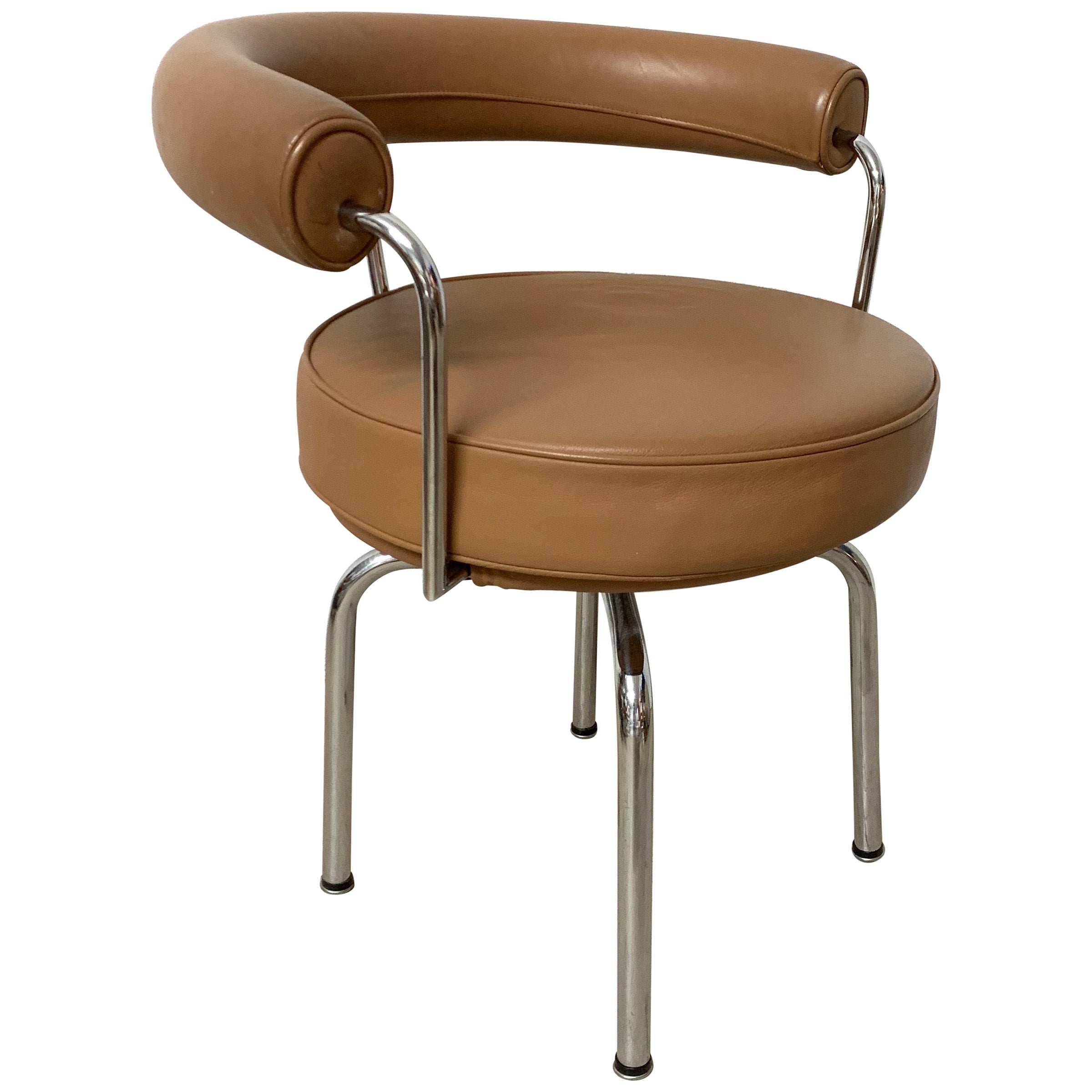 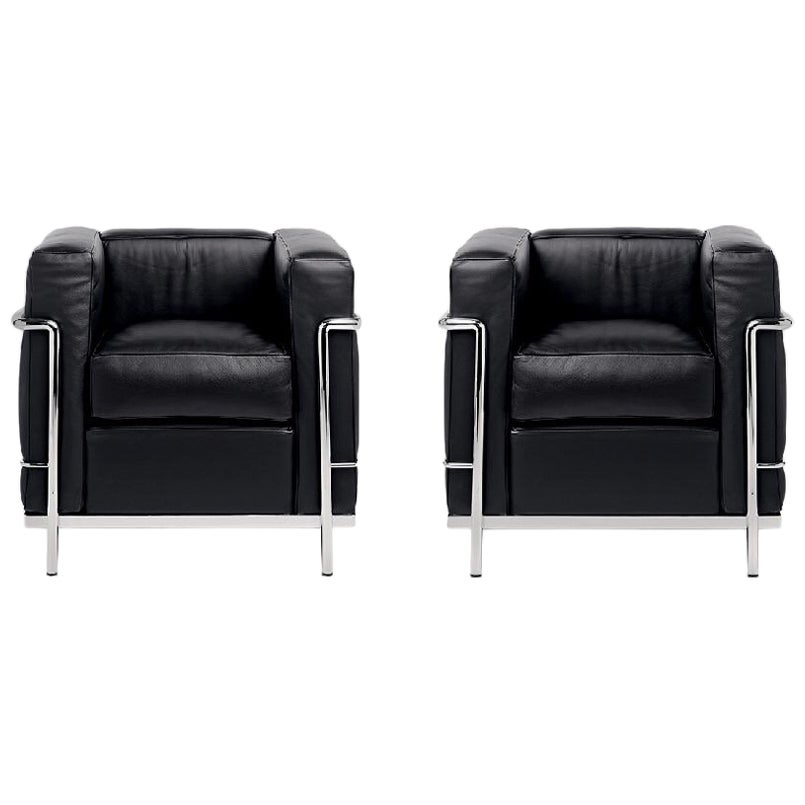 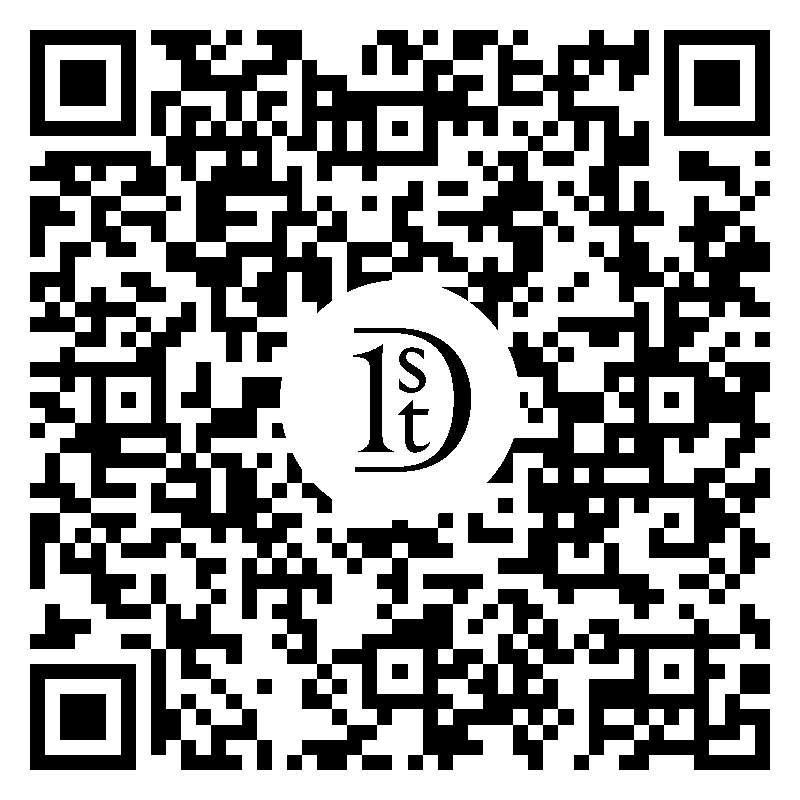 If you want the most comfortable and sizable club chair and sofa to sink your heinie into, this grouping of three Le Corbusier for Cassina (signed) LC2 and LC3's is the living room set for you (and of course, your heinie). Large and in-charge, the 'LC3 - Grand Modèle' is the pinnacle in living grand; grand in style and grand in comfort. Paired with an 'LC2 - Fauteuil Grand Confort, Petit Modèle' loveseat, these early production examples (circa 1965-1970) are an Ideal collectors set. The LC3 and LC2 was designed in 1928 by Le Corbusier; his cousin and colleague Pierre Jeanneret; and Charlotte Perriand. Produced by Cassina from 1965 to 2011, this LC2 settee and pair of LC3 club chairs are early production year examples (original Cassina years) with early production stamped frames with model and inventory numbers making this a sought-after collectors set. On-trend lightly distressed patina on the grey frames as can be seen in photos - there are no issues to the frames other than the age and wear to the grey finish, structurally they are in very good condition. We can repaint and lacquer the frames upon request, contact us for more details. Orange colored velvet cushions are in vintage condition and work very nicely with the vintage gray frames. We can reupholster the cushions to new fabric or leather of your choosing upon request, contact us for more details. these fantastic extra-wide 'LC3' lounge chairs and LC2 two-seat sofa are suitable for interior designers and their most demanding collector clients. The soft orange velvet with vintaged grey frames adds a laid-back casualness ideal for those who love vintage patina and the warmth that age provides in their home. These elegant and sophisticated LC2 club chairs and LC3 loveseat sofa by Le Corbusier for Cassina would work great in a Mid-Century Modern, Scandanavian Modern or Danish modern home or penthouse apartment but could also look fantastic in a Contemporary or Post-Modern room. Also consider mixing it up in a Traditional, Transitional, Classical or Art Deco room with a splash of juxtaposition. Would also be an Apt choice in a commercial project such as a hotel lobby lounge or members club, creative design studio or high-rise executive office. Consider using as side chairs, dining, cafe or breakfast table chairs, bedside chairs, fireside chairs, dressing or changing room chairs, hallway chairs, entryway or mudroom chairs, nursing or reading chairs, conference room chairs, office or desk chairs, guest chairs, lobby chairs, lounge chairs or occasional chairs ideal in virtually any setting. More About the Design (From Cassina's website): The LC3, historically known as the Fauteuil Grand Confort, was designed in 1928 by Le Corbusier, Pierre Jeanneret and Charlotte Perriand as part of their revolutionary interiors project. The first prototypes were made to furnish Villa Church, owned by an American couple living in Paris, and the next year a selection was displayed – with much scandal - at the Salon d’Automne at the Grand Palais. Each architect had designed a specific version for the exhibit, the production of which they personally financed, based on their individual ideas and tastes. Their final choice was to show the Le Corbusier version. Following the exhibition the three architects took their personal prototypes home: Charlotte Perriand to her apartment in Montparnasse, Le Corbusier and Pierre Jeanneret to rue Jacob in the Latin Quarter, until 1934 when Le Corbusier moved to his new apartment in rue Nungesser-et-Coli. (From Wikipedia) Grand Comfort is a cube-shaped high armchair, whose leather cushions are held in a chrome-plated steel corset. The LC-2 and LC-3 were referred as Cusion Baskets by Le Corbusier. They are more colloquially referred to as the petit confort and grand confort due to their respective sizes. In popular culture: The LC-2 and LC-3 have been featured in a variety of media, notably the Maxell "blown away" advertisement. At the 2010 Apple event, the then CEO Steve Jobs used a Classic LC-3 chair while introducing the iPad. They are a permanent design collection of the Museum of Modern Art. In the modern day BBC adaptation of Sherlock Holmes (Sherlock), Sherlock Holmes sits in a LC-3, while Dr. Watson sits in a traditional Club chair. MEASUREMENTS: LC3 Chairs (2) H 24" x W 39.75" x D 29.25" Seat Height: 15.75" Seat Depth: 21.5" LC2 Sofa (1) H 26.25" x W 54" x D 29" Seat Height: 19.75" Seat Depth: 21.25" CONDITION: Good vintage condition with age appropriate wear. Ideal either for reupholstery or use in a room where vintage items are welcomed. Fabric has light wear but no major issues. Can be steam-cleaned for free upon request. Cushions are in very good condition. Frames are light to moderate wear and patina to surface level finish but no issues deeper than the grey finish, can be repainted and lacquered upon request. Straps under cushions are in good functioning condition. Good early production collectors set, ready for immediate use.

Recognized Seller
These prestigious sellers are industry leaders and represent the highest echelon for item quality and design.
Diamond Seller
These expertly vetted sellers are 1stDibs' most experienced sellers and are rated highest by our customers.
Established in 2012
1stDibs seller since 2015
1,122 sales on 1stDibs
Typical response time: 1 hour
Associations
20th Century Specialists
More From This Seller
View All From Seller