Aesthetics, AI and algorithms come together in “Coded Elegance.” As its curator says, “The enjoyment you may draw from a generative-art NFT is really down to the craftsmanship of the code itself.”

In the world of NFTs, the term generative art refers to the process of creating visual representations via computational code, so that patterns, forms and colors are dictated by algorithms or artificial intelligence (AI). Because these semi-random renderings emanate from a strict set of rules, they can be seen as having dual authorship, split between the artist who styled the codified language and the autonomous system that reacted to the software commands.

What’s more, generative NFTs are created on-chain via a smart contract and stored on a blockchain. Each is entirely unique, since the minting process is triggered by the transactional process that embeds the work with buyers’ personal data, such as their wallet addresses or transaction IDs. You could argue that generative NFTs have the distinctive quality of connecting artist, technology and collector as the instrumental components of an evolutionary digital-art practice.

Multidisciplinary artist Sarah Meyohas — who famously pioneered the idea of NFTs with her 2015 Bitchcoin project, widely considered the first tokenization of art on the blockchain — maintains that generative NFTs have an underlying creative process that is often undervalued or simply overlooked.

“One of the things that the blockchain has changed about generative art is that artists can no longer cherry-pick their preferred selection from an algorithmic yield, since the chain requires all the outputs, good, bad and average,” she says. “This is neither better nor worse in terms of artistic merit, but it does promote the need for consistency in the algorithm that is being written. In essence, the connection and enjoyment you may draw from a generative-art NFT is really down to the craftsmanship of the code itself.”

She touches on an important point: For collectors, generative NFTs offer a unique proposition, in that the appeal of the visual asset is rooted in what you can see and what you can’t possibly know, namely the complexity behind its systemized design.

“Because generative artworks generally develop as series, you can at least understand how chance can affect the set structure. And if you think about it, structure and chance exist in all art disciplines,” says Meyohas, who began experimenting with AI and generative adversarial networks, or GANs (machine-learning models that assemble visual data by pitting two neural networks against each other), as early as 2016.

Although not a generative artist herself, Meyohas is a staunch promoter of the discipline, believing in its conceptual significance as an art movement. “With other NFTs, you’re relying on the platform or on the creator to be hosting that file, but on-chain art is written and stored on the blockchain, so you could say it is the most ‘archival’ form of cryptoart,” she explains.

Now, Meyohas is the curator the new NFT exhibition on 1stDibs, “Coded Elegance,” featuring eight prominent generative artists who produce works in a variety of styles, some inspired by gaming visuals and software graphics, others indebted to more analogue modes of creation.

One crypto creative interested in bridging the gap between the digital and the physical world is San Francisco–based Emily Xie, who uses AI to delve into the tradition of East Asian woodblock printing. Her generative series “Memories of Qilin” evokes the textures and patterns of the ancient art form while deconstructing its myths and symbolism through fragmented visuals that conjure up their own abstract, organic and even zoomorphic shapes.

“What’s quite incredible about Emily’s works is how handmade they look, as if each rendering had been drawn on paper,” says Meyohas. “Also, she’s a girl, and female cryptoartists are underrepresented in this field.”

Another American female cryptoartist blending the digital and physical experience is Saudi Arabia–based Melissa Wiederrecht, who has developed a body of work that uses computational structures to engender an emotive connection between what is seen and what is “authored.”

In doing so, she creates an interesting paradox: Using digital and analog visuals, she has moved further and further into the machine realm, applying both algorithmic systems and code to create highly texturized generative pieces that have lives of their own. Still, each image relies on a hands-on practice that is positively artisanal.

“I like to use a lot of blurs and textures that I code by hand to add depth to my pieces,” Wiederrecht says. “The lines in Burst and Cascade are all made in a similar manner: by tracing along a mathematically calculated line with thousands and thousands of little lines or circles right next to each other, until they blend together to look like a single solid line. The textures are minute lines randomly thrown about and delicately overlaid onto the pieces. The blurs are a very unique technique of mine — and generally involve calculating every single pixel of the piece individually with a different amount of blur.

“Misty Blossom, however, is generative but not made with code at all!” she adds, referring to a floral NFT that predates the other three. “The processes, which are very similar to my code processes, are all designed with ‘nodes’ in Adobe Substance 3D Designer. The algorithm for it is still completely random and can make infinite variations, just like code. The watercolor texture on top of Misty Blossom is actually based on a real watercolor texture scanned from a page my daughter painted, but it is also adjusted with the algorithm to be seamless and be jumbled about the piece randomly.”

Aaron Penne, who’s the director of engineering at Art Blocks as well as an artist, also explores the relationship between the algorithmic and the organic with generative artworks that appear at once digitally constructed and handcrafted, using color and shape to create the illusion of movement. According to him, this digital discipline offers possibilities in art that have never been explored before.

“I am interested in using systems to explore the soul. Generative artwork naturally enables these explorations with its infinite parameter space and ability to shift with time,” he says. “Unlike video art, which is a recording of past moments in time, generative art can become a continuously new performance, creating color and composition live in front of the viewer.”

His piece Saying the Same Thing is at once orderly and avant-grade, machine-like and lyrical, which is perhaps the reason for its title.

“Saying the Same Thing utilizes code to create and manipulate shapes while using strips of pixels from my photographs to bring an organic rhythm of color. It is generated from a Python program that has been refined over several years on the same Raspberry Pi [single-board computer],” Penne explains. “With this particular style, I am intentionally seeking a painterly aesthetic, yet celebrating the hard-edge digital artifacts that become clear on closer inspection. I am interested in duality and the harmony between human touch and the digital machine.”

Meyohas’s personal collection of generative NFTs includes a piece by theoretical-physicist-turned-on-chain-artist EDG. “He’s interested in the origins of life and particularly how it may have emerged from inanimate matter or indeed anywhere in the universe,” she explains.

One of EDG’s “Coded Elegance” submissions is an abstract piece dominated by swirls of vibrant blue, yellow and green, drawn from his “Mazinaw” series. The painterly composition has an ethereal quality, as if its shimmering waves of light were agents of the supernatural or fragments of a mysterious electromagnetic field. His other piece in the show, Spectral Being 12, likewise seems supernatural but utilizes a monochrome palette for a more ghostly feel.

“In these works, the characters displayed on-screen are not meant to form sentences or words but are used as geometric shapes that create compositions and movement in a sort of choreography,” Gysin explains. “I try to blend several layers into these compositions: rhythm, motion, macro- and micro-geometries and color. In real time, these compositions can evolve and vary indefinitely.”

Los Angeles–based artist, educator and programmer Casey Reas cites as influences the minimalist, Color Field, nonobjective, concrete and conceptual art movements of the last century and explores them through the 21st-century lens of software. In the case of CENTURY 999, one of his “Coded Elegance” pieces, he allows the collector to take part in the act of authorship.

“CENTURY is my homage to paintings and drawings from the 20th century and the countless hours I’ve spent looking at them,” he says. “The strongest direct reference is a series of pictures created by Ellsworth Kelly in the 1950s, where he cut his paintings into pieces and reassembled them in different orders. CENTURY creates a distinct picture for each unique transaction hash, and you can ‘cut’ and ‘reassemble’ it in different ways by pressing 1 on your keyboard. Press 2 to put the slices in the original order. These are landscapes — they look best large and in motion running as live code. The viewer can also cut the artwork into different compositions to explore it more directly.”

Chicago-based Matt Kane is another generative artist whose work uses time and change as mediums. His “Gazers” series celebrates the lunar cycle, color theory and generative art by algorithmically syncing with the moon’s phases. “The Gazer featured in the show is a rare one, which can double as a clock, mapping its changing moon phases with the hours of the day. Many have referred to ‘Gazers’ as a living artwork because each work changes over time, following predictable cycles while also evolving in often surprising manners,” Kane says.

“Designed to evolve for thousands of years and to take advantage of future technological advances, ‘Gazers’ exists fully on chain and yet has a complexity and depth unmatched by any other NFT art project that I am aware of,” adds LEOS10301, the collector who currently owns Gazers #860. “Even after eight months since mint, we still only understand about 30 percent of what is built in to ‘Gazers’: lunar-phase tracker, time of day, special celebrations, air drops to upcoming unannounced collections — such as ‘Voyages’ by Matt Kane — and many other amazing details and features yet to be discovered. In many ways, ‘Gazers’ is like a high-end watch collection for the NFT space but combined with beautiful art.”

Kane also has a generative NFT from his symbolic “Door” series in the exhibition. “The subject is based on Yukio Ota’s [1979] ‘running man’ exit sign,” the artist explains. “I created these after being in quarantine for a year and a half. We never exit without also entering, so the work became a meditation on our many choices which act as portals in our lives.”

Art history lives on through the work Spanish artist Marcelo Soria-Rodríguez, whose abstractions muse on the emotional connection between man and machine using a visual language inspired by the pioneers of Orphism and Suprematism, including Wassily Kandinsky, Sonia and Robert Delaunay, Hilma af Klint, František Kupka and Francis Picabia.

Through the magic of software coding, each of Soria-Rodríguez’s NFT “paintings” evolves dynamically in “in-between times” as the viewer pauses and restarts the work, with the option of looping it indefinitely, setting in motion an endless cycle of painting and vanishing. According to the artist, this action broadens our concept of cognitive space and the possibilities of art as an emotional trigger.

Indeed, the desire to stretch the boundaries of perception unites the work of all eight contributors taking part in “Coded Elegance,” which Sarah Meyohas describes as an homage to Web3’s most compelling artistic practice.

“You can instantly understand and appreciate the complexity of the code that has gone into these NFTs,” she says. “The systems may not be decipherable, but they are powerfully expressed through a poetic and inspiring visual language. It’s all there to be marveled at.” 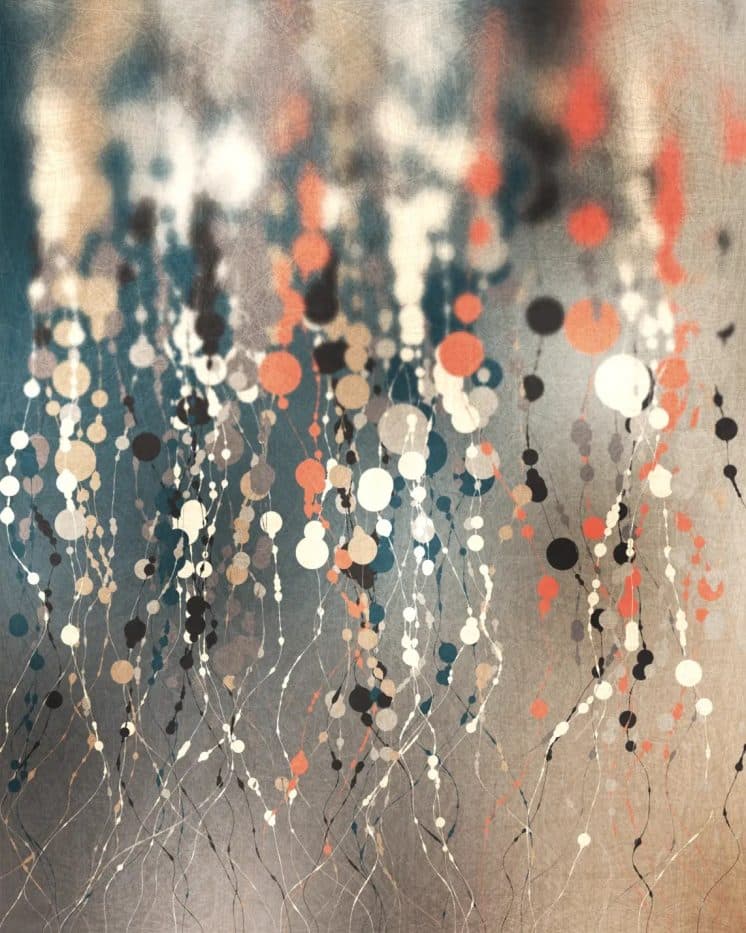