Windows set the tone for a room, making it feel modern or classic, airy or intimate.
Pin
Share
Tweet
Email 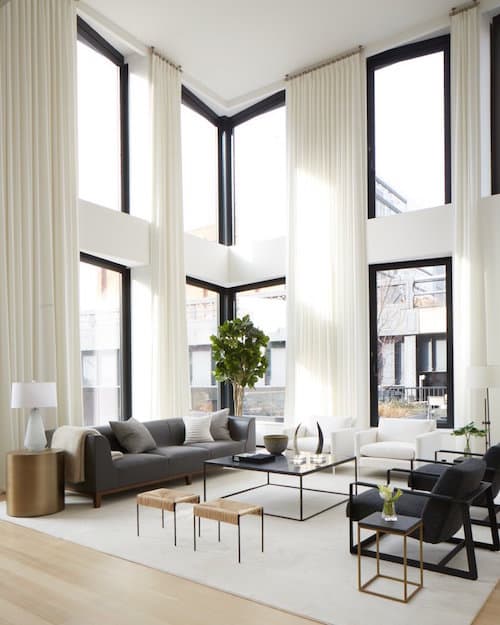 A neutral palette and floor-to-ceiling curtains highlight the massive windows in this ASH NYC–designed Manhattan duplex, which is next to the High Line. 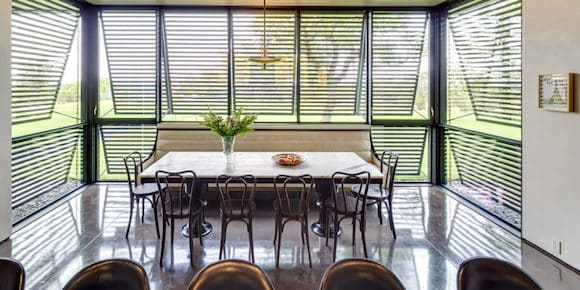 “I stayed in a house in Provence with lattice work on the windows, and I love how it filtered the light and created such a special atmosphere,” says Sara Story of the breakfast room at SK Ranch, her home in Texas Hill Country. “I wanted to recreate it here. This room is southern facing, so the wood screen works beautifully.” The space features a Paavo Tynell brass and glass chandelier from Craig Van Den Brulle, hanging above a custom DLV Designs table and vintage Thonet chairs 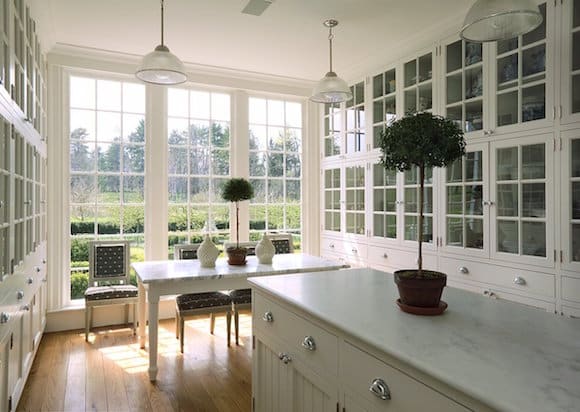 “This room was created as a china room,” Allan Greenberg Architect says of a space in this 1760s Connecticut home that the firm rebuilt after the interior was destroyed by a fire. “However, the large windows provide so much light to the room and make it such a wonderful space to be in, that it is also used as a breakfast room. The glass-fronted cabinets echo the design of the windows, and the white oak wood flooring and Carrara marble countertops further brighten the room. 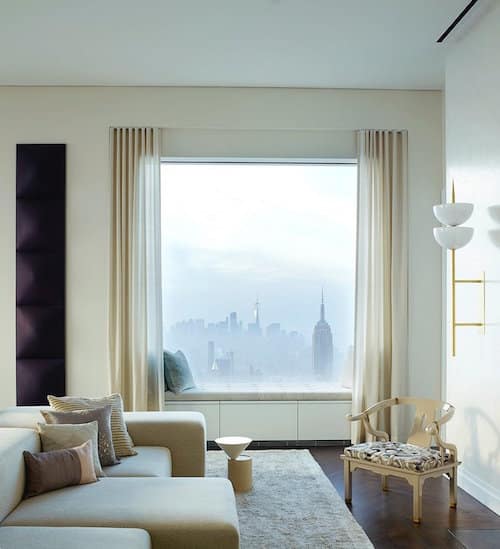 Kelly Behun designed the sky-high penthouse of this Rachel Viñoly tower on Park Avenue in Manhattan, which is the tallest residential building in the western hemisphere. The two-sided sofa – as well as the carpet that follows its shape – are custom.,”The window seats serve as cozy rooms unto themselves,” Behun says, “the perfect perch from which to take in the cinematic views!” The room includes sconces from Van Den Akker, a side table from The Future Perfect and curtain fabric from Holland & Sherry. 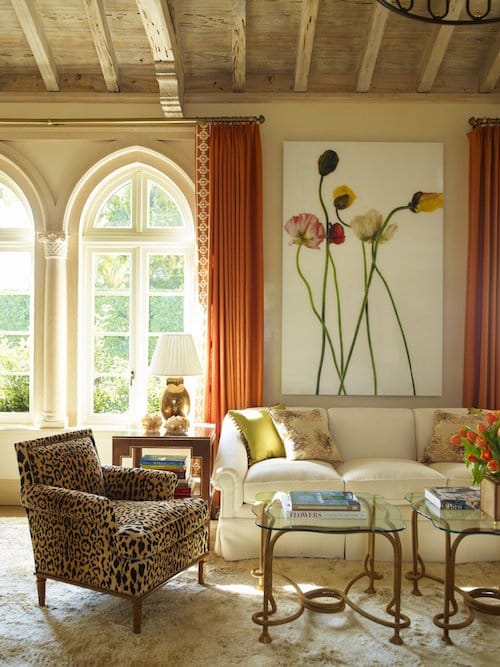 When Cullman & Kravis was designing this Palm Beach vacation home, the mantra was, “if you love it, it will work.” That attitude is reflected in the bright pops of color and bold fabrics, which contrast nicely with architectural details like the Gothic windows and beamed ceilings of this 1931 landmarked home by architect John Volk. 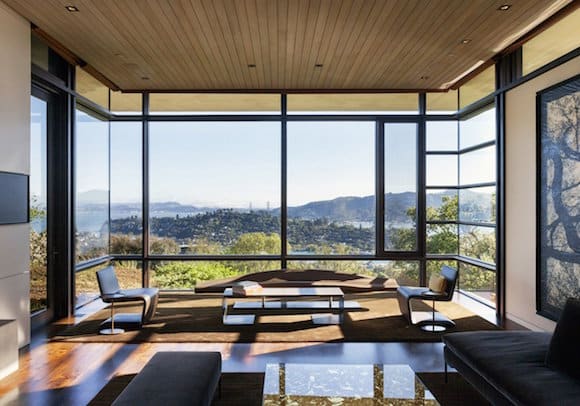 Low-slung contemporary furniture keeps the focus on the expansive views of the San Francisco Bay in this home by Aidlin Darling Design. 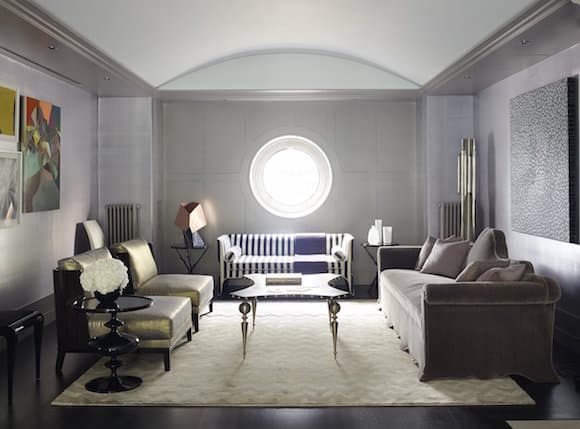 The circular window in this London home sets a moody vibe, which Rafael De Cárdenas played up by covering the walls in lavender linen. The space includes a pair of Christian Liaigre, which sit opposite a mohair sofa from Todd Merrill. The vintage settee from Alan Moss is flanked by two Hervé Van der Straeten side tables from Maison Gerard. 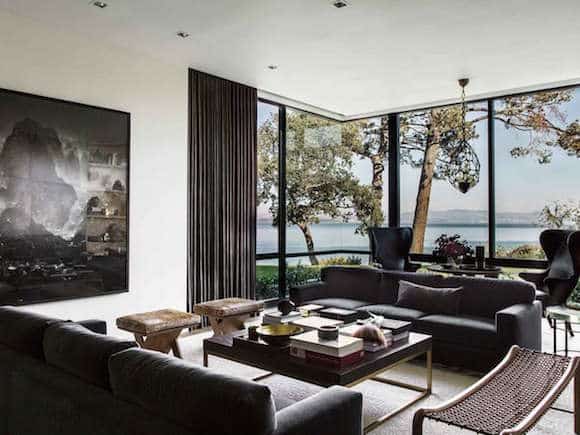 “This Tiburon house has floor-to-ceiling windows that embrace the views,” Nicole Hollis of this home she designed with architect Brooks Walker. “The owners also have a world-class contemporary art collection. The idea was to create a materials palette in dialog with the surrounding hillsides that was also subtle enough not to compete with the art. The furnishings are made with exacting artisanship, but the view and the art are still the stars.” The space includes a pair of Jean-Michel Frank sofas and an Hervé Van der Straeten pendant lamp. The artwork is Wintery Forest, 2014, by Yang Yongliang. 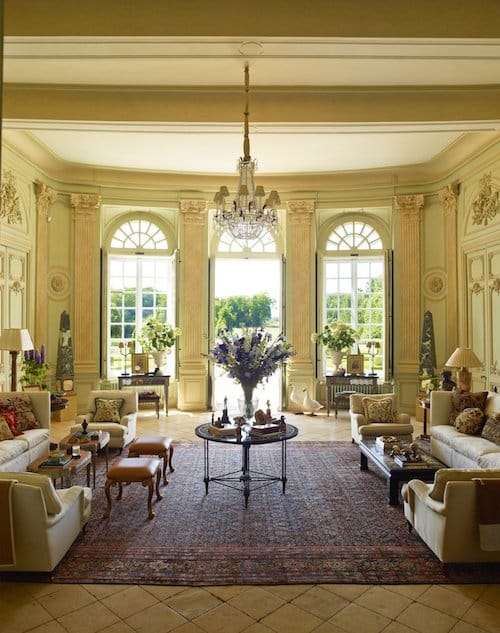 “Upon entering the grand salon at Château du Grand-Lucé, you are immediately struck by the wonderful sense of scale: the exquisite poise with which the architect balanced drama and intimacy,” designer Timothy Corrigan says of his home in France. “Three twenty-foot-tall double French windows together form an outward-curving bay, and you can’t help but be stopped in your tracks by the room’s majesty.” However, Corrigan says he wanted the room to feel “relaxed, comfortable and user-friendly,” so he chose pieces that would ensure the space “doesn’t look too studied or over-planned.” 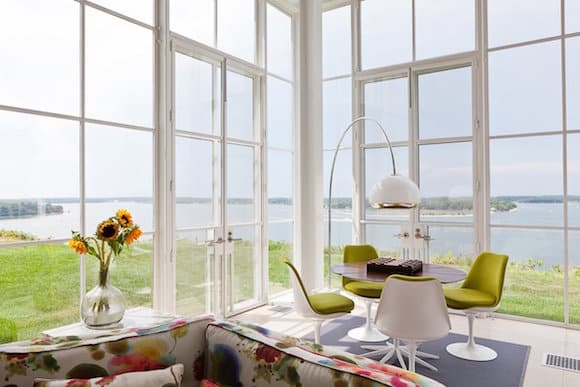 “The corner promontory overlooking the water of the living room is a prime family gathering location for games or a light meal,” Michael Haverland says of this Shelter Island, New York, vacation home. “The sculptural Guzzini arc floor lamp is an appropriately large scale for the 23-foot high volume. The sinuous shape of Eero Saarinen Tulip chairs, and a vintage Richard Schultz Petal table for Knoll from Studio 111, contrast the strict regular grid of the thin, elegant steel window mullion pattern, which is based on the proportion of windows of traditional Hamptons cottages.” 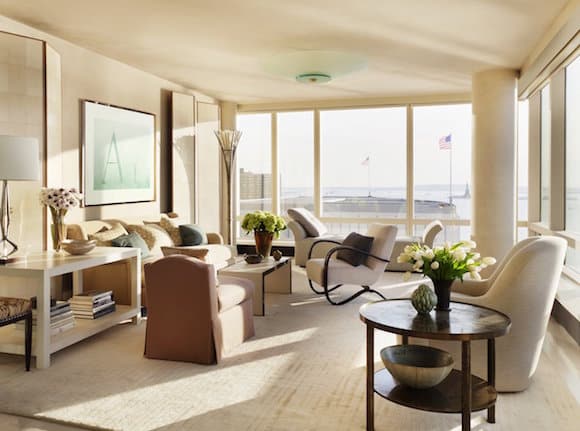 The living room windows in this Manhattan residence by Sandra Nunnerley frame a view of the Statue of Liberty in New York Harbor, so, fittingly, the apartment’s design was inspired by the feel of a luxurious ocean liner. The space includes Jindrich Halabala chairs with bentwood arms and Fontana Arte lighting. 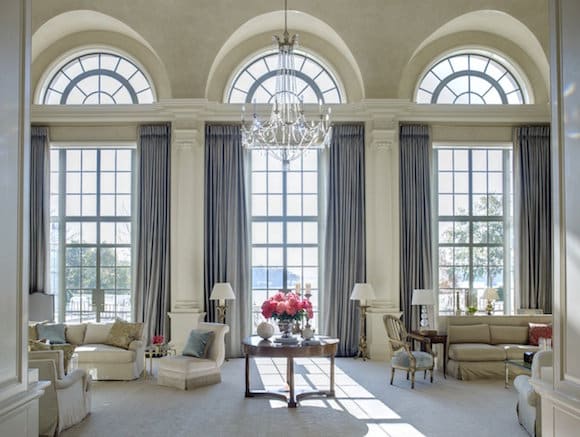 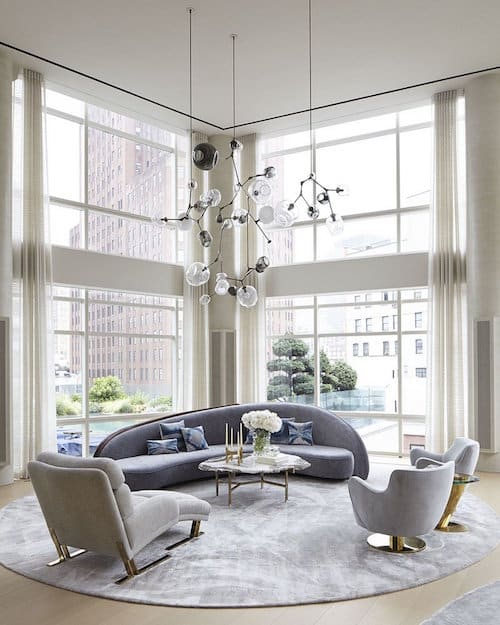 The floor-to-ceiling windows of this double-height Tribeca triplex by Amy Lau highlight the Lindsey Adelman chandelier. The Vladimir Kagan sofa and pair of swivel chairs are custom. 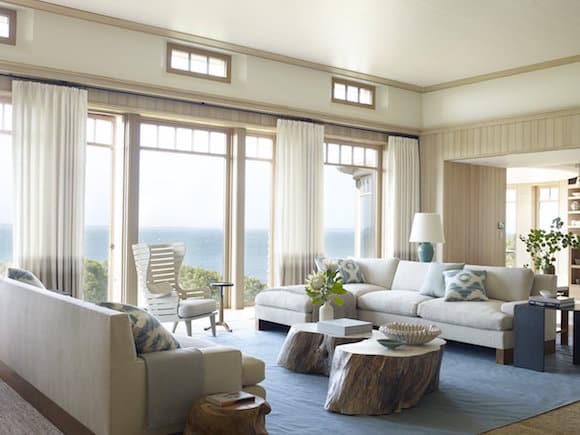 In this New England beach house by Ike Kligerman Barkley, the firm maximized the view and the light by adding transom windows above the wall of windows overlooking the Atlantic. 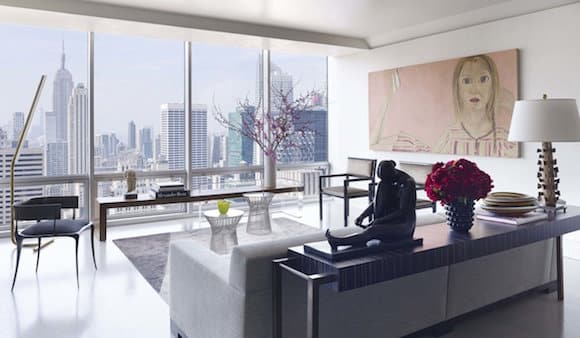 “Symmetry was essential so the seating would feel well-balanced around the room,” Rafael de Cárdenas says of this residence in Manhattan’s Olympic Towers building. “We chose the art and furnishings to specifically complement the window and not exceed it in scale or presence. The windows informed the layout of the room, highlighting the unique moment between interior and exterior in the space.” The bench and console are custom pieces by de Cárdenas‘s firm and the sofa is Christian Liaigre. 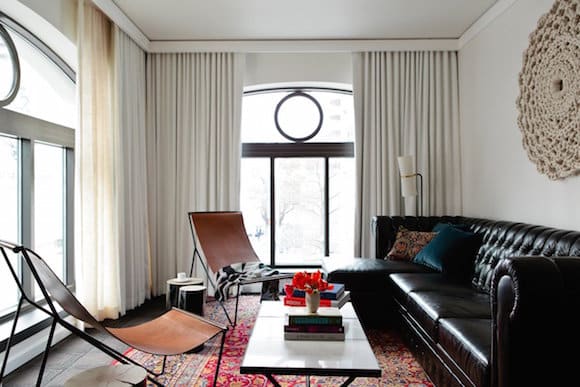 Nicole Hollis designed the interiors of Seattle’s Palladian Hotel, built in 1910, with guest rooms inspired by bohemian artists’ lofts. “We gave a nod to Seattle’s past with references to industry in the metal accents, timber in the log side tables and glimmers of gold from the gold rush,” she says. “We added a touch of blue from the sky and water of nearby Puget Sound. The result is a room that’s in direct communication with the cityscape through these large picture windows and also feels grounded and authentic like it’s always been there.” 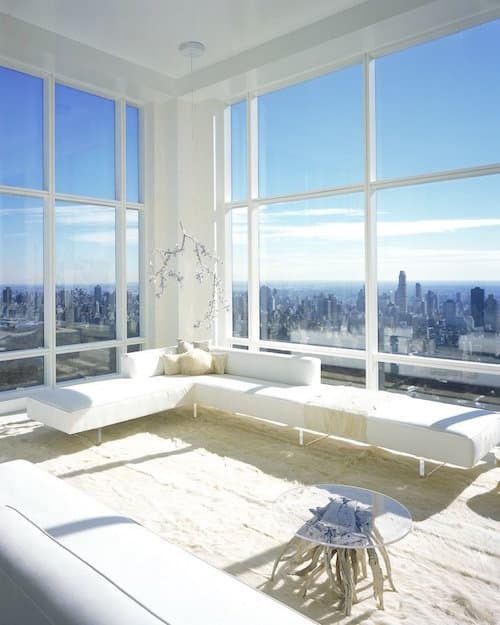 For this Manhattan penthouse overlooking Central Park, Kelly Behun says, “with the large windows and expansive views, I wanted the space to feel like you were floating in a cloud.” A Tord Boontje Blossom chandelier hangs over the custom pair of low-slung Vladimir Kagan sofas. 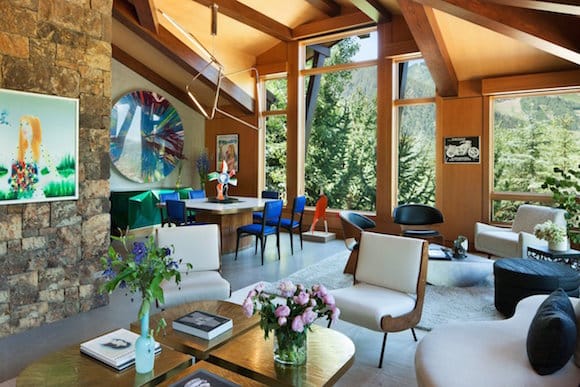 Large windows highlight the mountain views at this Aspen, Colorado, chalet by Sara Story. The home has an eclectic mix of vintage and contemporary furniture and art by designers like Gianfranco Frattini and artists like Damien Hirst.