We take a fresh look at a more than 300-year-old fixture in furniture design.
by Megan Cipollini
Pin
Share
Tweet
Email 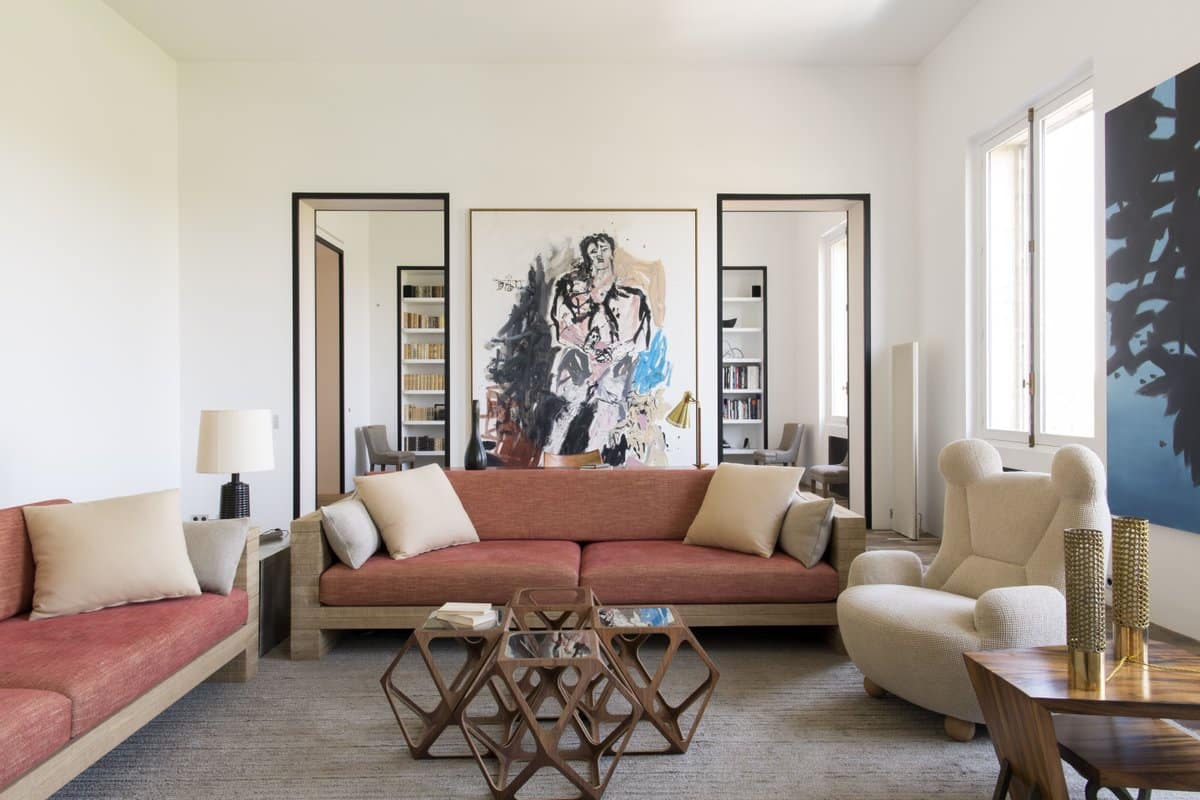 Pierre Yovanovitch outfitted this Paris living room with a wingback of his own design, the Hans Wegner–inspired Bear chair. Photo by Stephan Julliard

They may not offer structural support, but the wings on classic wingback chairs certainly do have a purpose, or did, when they were first conceived in England in the 1600s.

Back then, the armchair protrusions were meant to protect the sitter from drafts and from the strong heat radiating from the large fireplaces that were popular at the time. This explains why the wingback is so strongly associated with cozying up by the fireplace.

Although the functional aspect of a wingback may be obsolete in the 21st century, the chairs have maintained their popularity over the years and have seen waves of revivals, from mid-century modern spinoffs to playful contemporary adaptations (like the above Bear chair by Pierre Yovanovitch, where in the place of wings are furry ears).

Below, we look at 23 ways you can re-envision this iconic chair design. 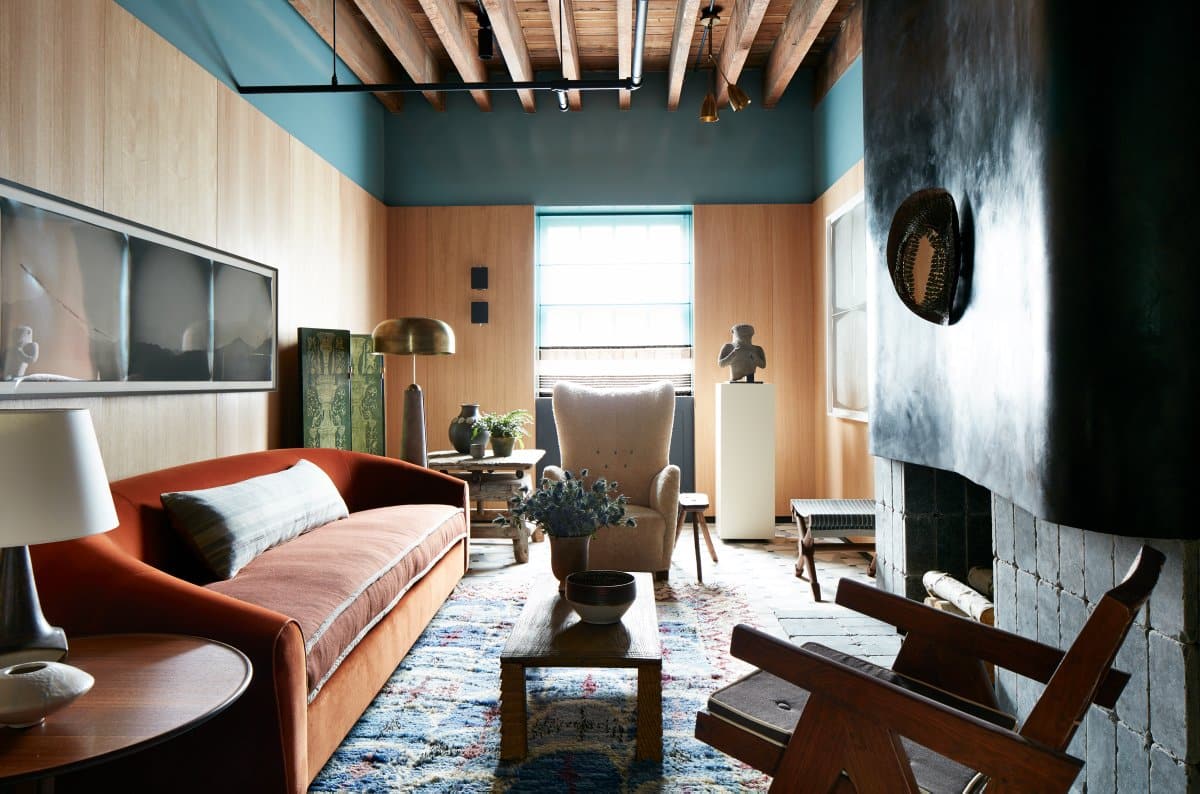 Putting a wingback by the fireplace isn’t exactly reimagining it, since that was the chair’s raison d’etre. Still, it’s not what you do but how you do it that makes the difference.

Here, Neal Beckstedt placed a circa-1942 Fritz Hansen wool and shearling lounge chair next to a brutalist fireplace, heightening the contrast between New York edginess and Scandinavian coziness in the top floor sitting room of the 2017 Kips Bay Decorator Show House.

“During the show, I found myself sitting in this chair greeting guests, and I must say it is now my favorite chair,” Beckstedt says. “I fell asleep in it a few times between visitors!”

In Its Purest Form 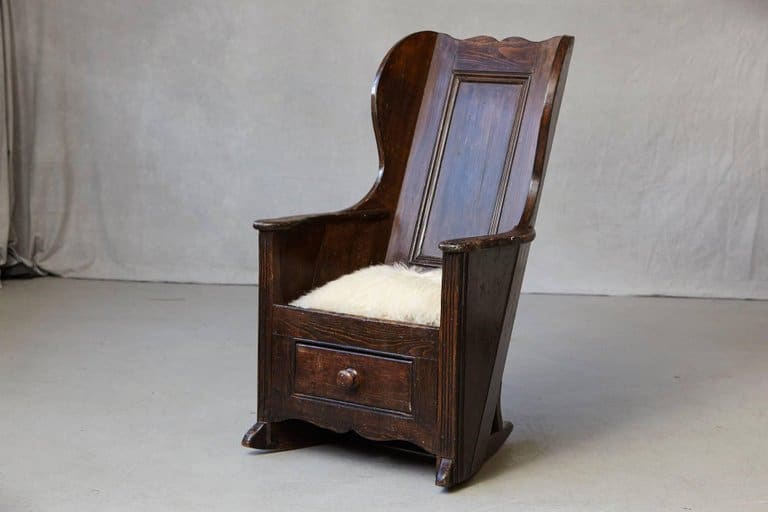 Although this wingback was crafted around 1800, it resembles the earliest, most primitive versions from the late 17th century. Upholstery was uncommon in those days, aside from some padding on the seat. This particular piece in elm and pine is typical of the chairs shepherds would use during lambing season in northern England. Here, shearling adds a layer of comfort.

As a Reading Nook 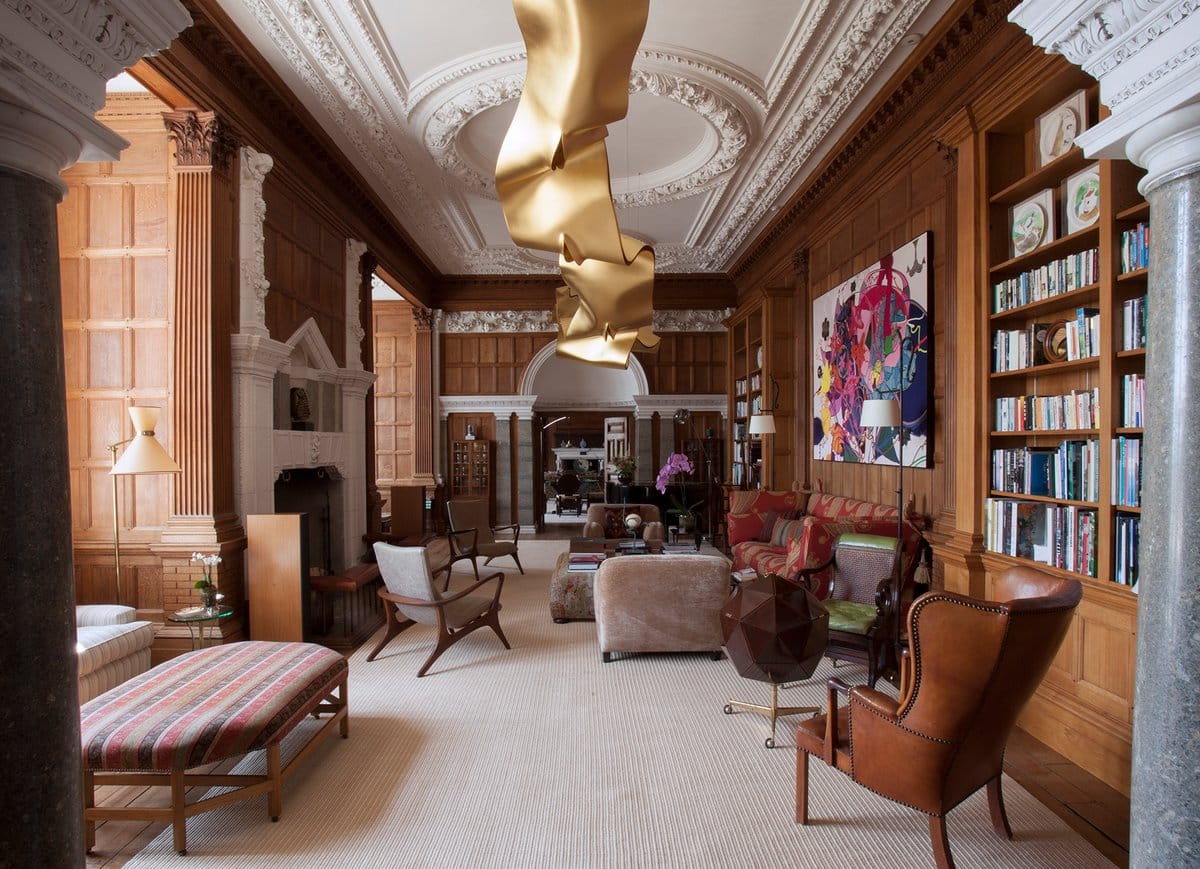 Historic elements like a coffered ceiling and wood-paneled walls soften up what could be a rather cavernous space in an English country manor by Robert Couturier. To add extra coziness, the designer created a variety of seating areas, for different sized groups, and made sure to carve out a reading nook for a single person to curl up in the circa-1940s leather wingback chair by Frits Henningsen. 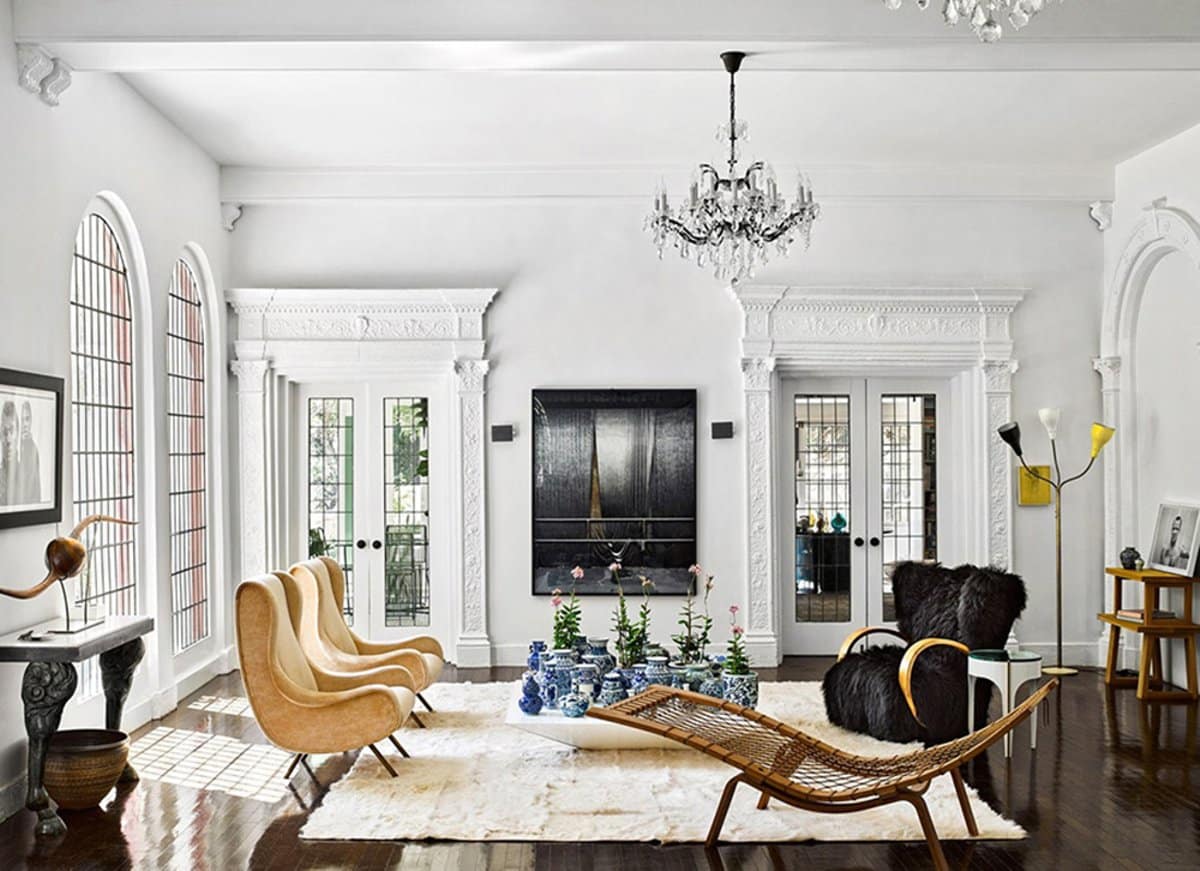 “Some chairs look good but don’t deliver comfort. But a good wingback delivers on all fronts. Not to mention, if you score a pair like I did, it’s twice as good,” says Brigette Romanek, cofounder of Los Angeles–based Hancock Design, who placed two 1950 Marco Zanuso Senior chairs side by side to create a conversation space in her above Laurel Canyon living room.

In a Futuristic Silhouette 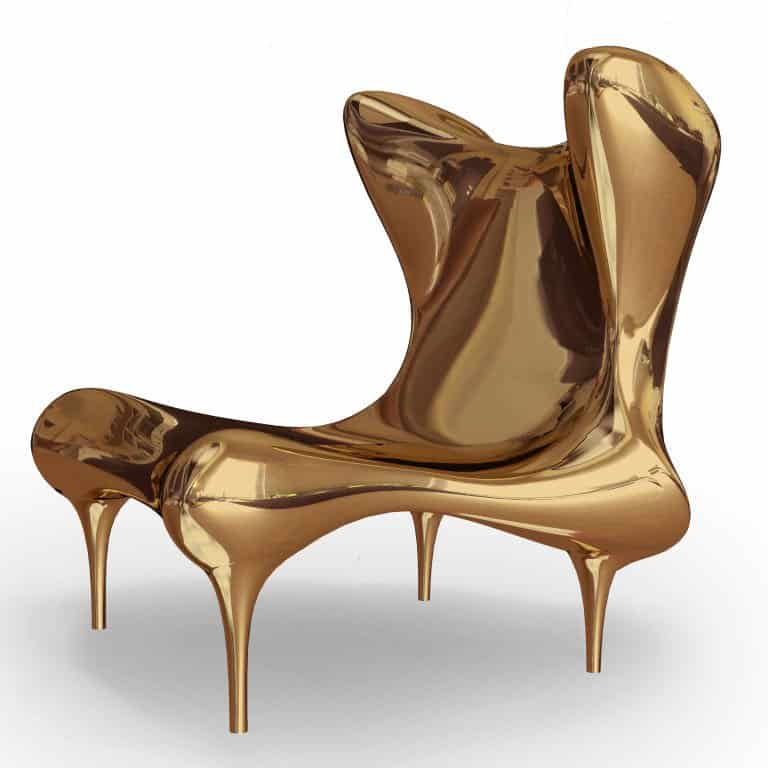 Dealer-designer Craig Van Den Brulle has taken the traditional wingback silhouette into the future. “The Riemann chair references the classic wingback with more of a curvaceous balloon like shape,” he says of his sleek, armless variation on the iconic chair, which was computer-drafted and 3D printed in both gilt bronze and stainless steel in limited editions. 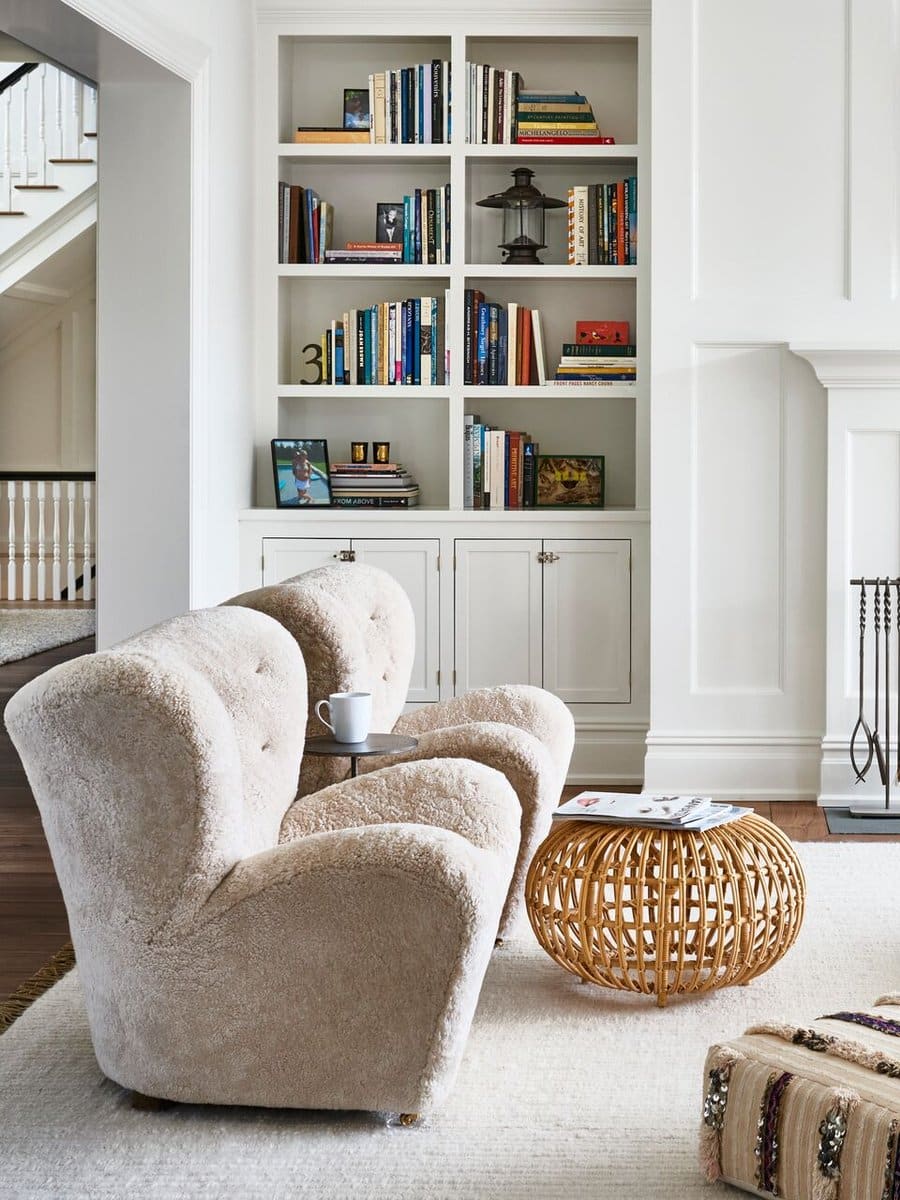 “Wingbacks are tremendously comfortable in shearling. You can easily curl up in one on a winter day to read a book and chill,” says Timothy Godbold, who incorporated two of them in the above Bridgehampton living room. Originally made in 1935, these Tired Man easy chairs by Flemming Lassen should feel, as Lassen himself put it, “as warm and safe as a polar bear cub in the arms of its mother in the middle of the ice cap.” 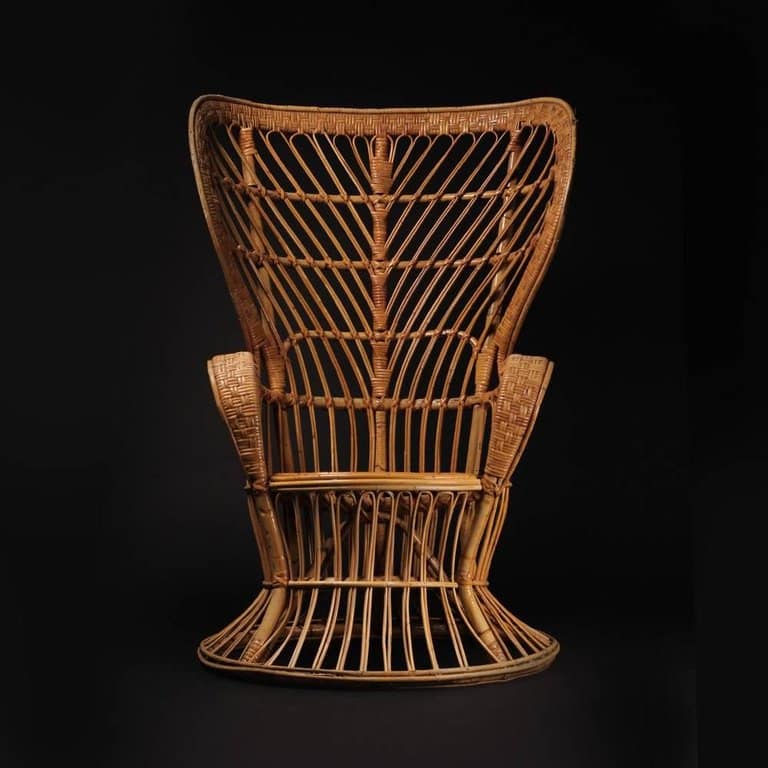 This Fan chair is commonly attributed to Giò Ponti, but there’s more to the story. Turns out, while Ponti was outfitting the interiors of the Italian ocean liner Conte Biancamano in 1949, he chose a design by his former student to furnish the ship with an air of exoticism. Since then the Fan chair, designed by Lio Carminati and manufactured by Vittoro Bonacina & Co, has become a classic. 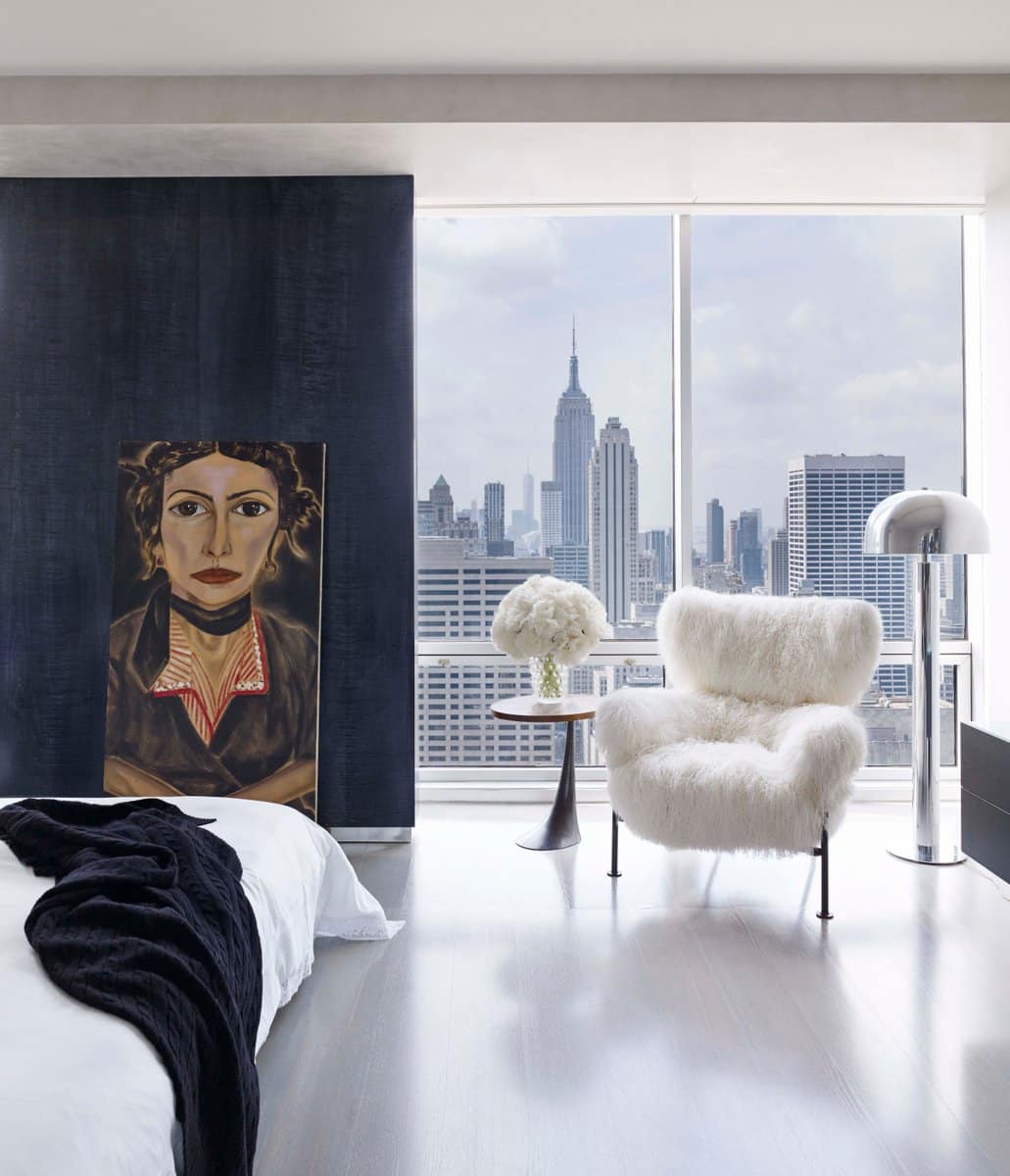 “This Franco Albini chair is not particularly cozy in its original black leather,” says Rafael de Cardenas, who purchased the Tre Pezzi chair from Nilufar in Milan and put it in the above Manhattan high rise. “So we upholstered it in this long-hair fur, which makes for a comforting place to sit in front of one of the world’s most dynamic cityscapes. It feels futuristic somehow sitting with the city behind you.” 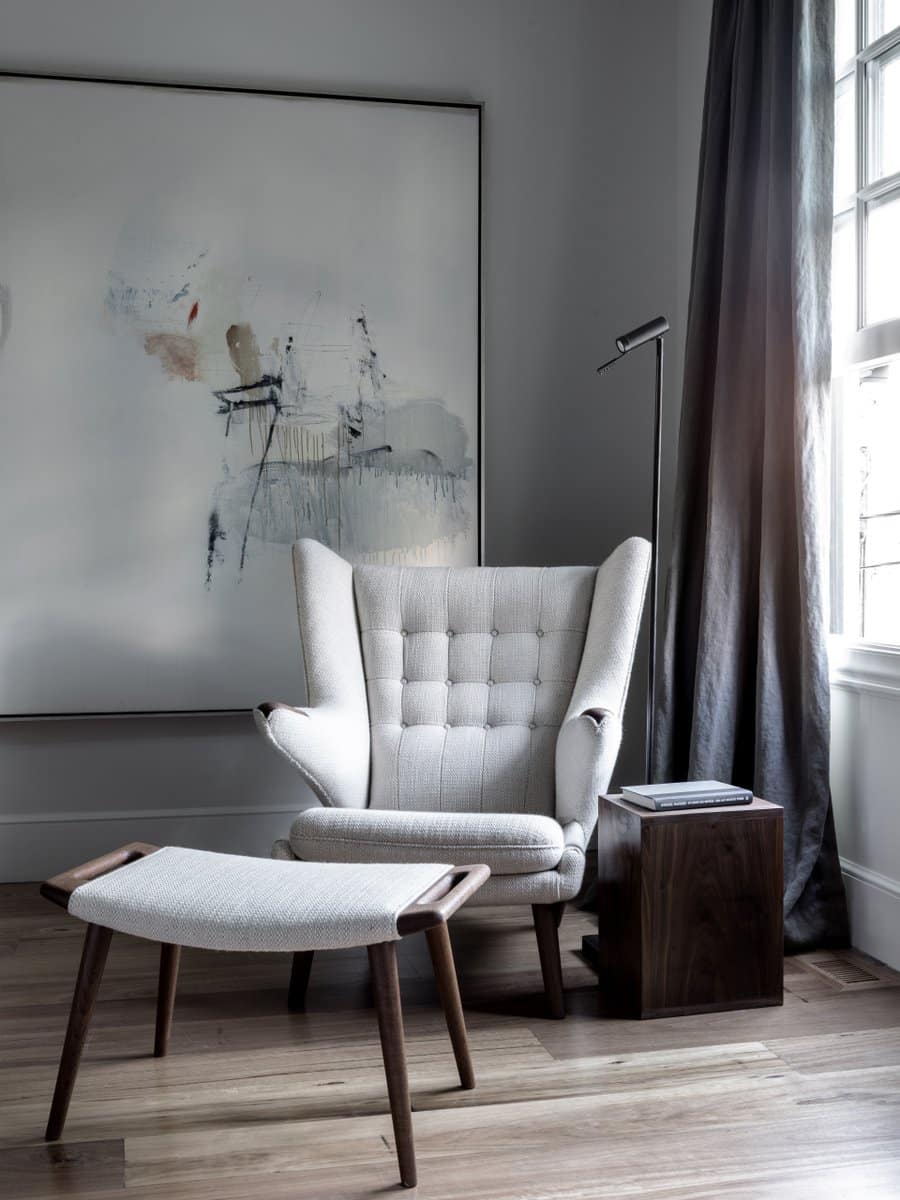 Who wouldn’t want to kick back in this classic Papa Bear chair and ottoman by Hans Wegner, upholstered in Maharam’s sumptuous Cobblestone fleece? Nicole Hollis, who purchased the pair from Galleri Feldt in Denmark and placed it in a San Francisco pied-a-terre says, “This chair has a timeless beauty and is appealing from every angle. It’s a great chair for lounging, so while it works well in a living room, it’s also a cozy choice for the corner of this master bedroom.” 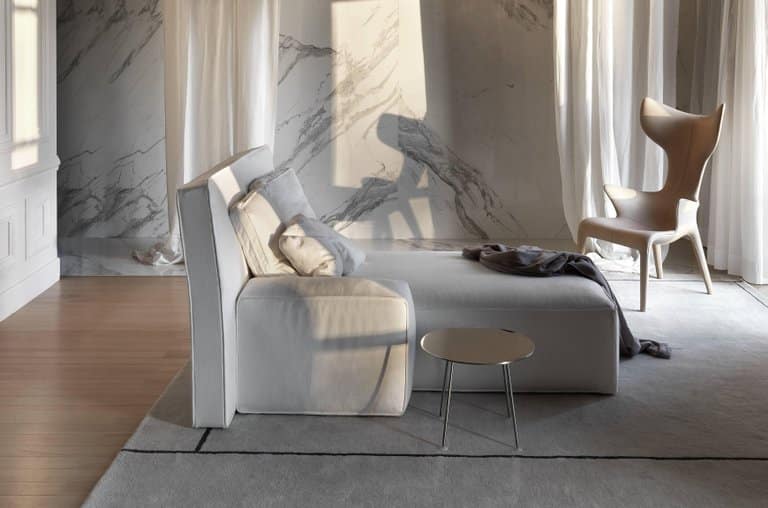 Leave it to star product designer Philippe Starck to create a stunning, and slightly ethereal, rendition on the wingback: the Lou Read Leather chair for Driade. The Parisian elongated the proportions of the back and exaggerated the wings to create elegant lines that would add sculptural interest to any space.

As a Modernist Statement 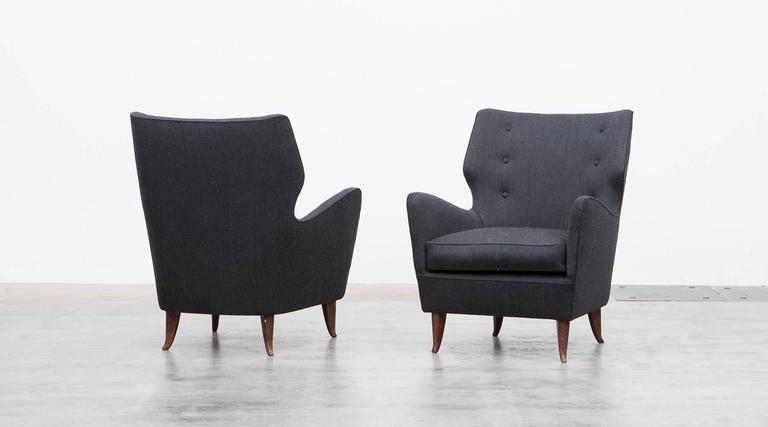 If ever there was an age of a mass wingback renaissance, it would have been in the mid-20th century, when modernists like Arne Jacobsen, Hans Wegner and Adrian Pearsall all designed their own variations. Most inspired, arguably, was Italian mastro Giò Ponti, who designed several takes on the wingback, including this pair of handsome and amply proportioned lounge chairs in 1949. 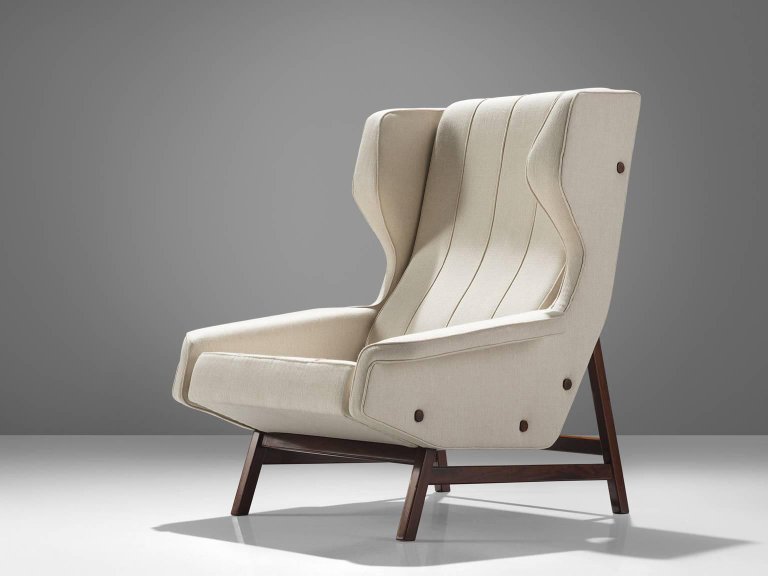 Gianfranco Frattini believed strongly in the combination of technology, industry and Italian workmanship. The lines and rivets of this lounge chair he designed in the 1950s are reminiscent of the type of seating found on high-speed transportation. Reupholstered in a NASA-white fabric in the workshop at Morentz, this sturdy lounge chair takes on a distinct Space Age vibe.

In the Dining Room 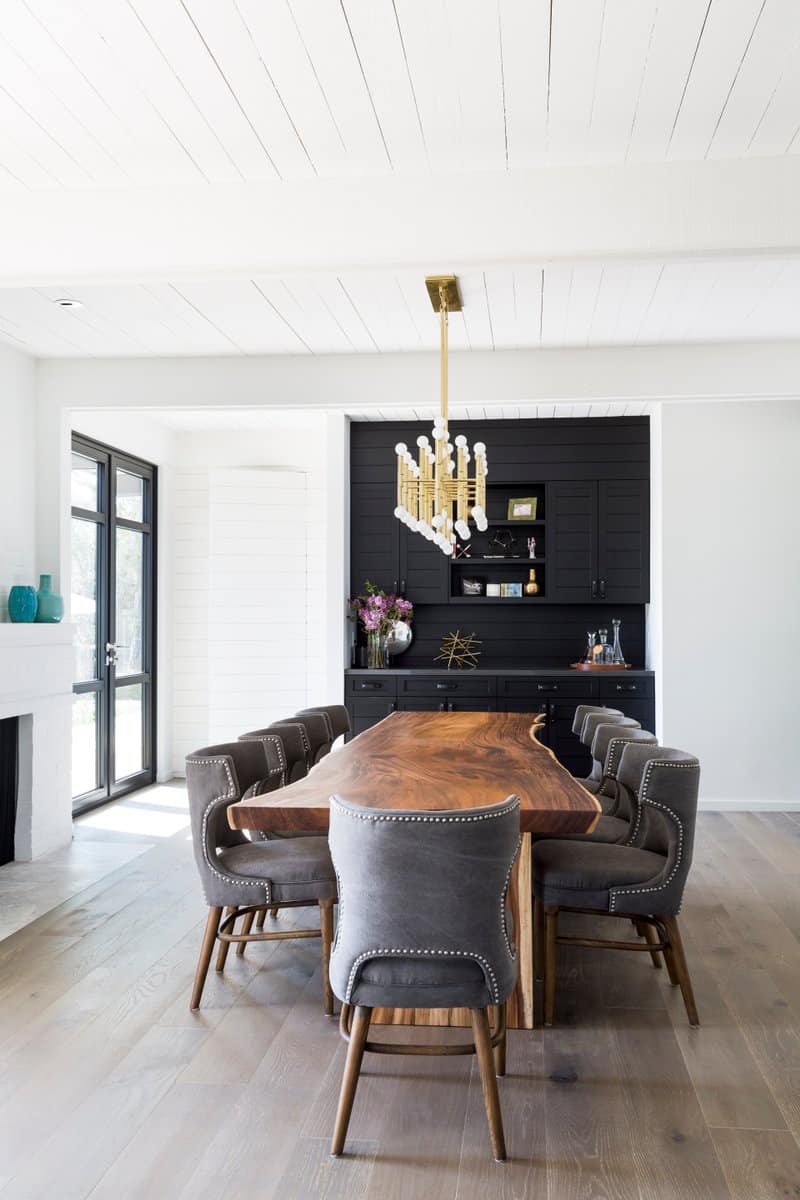 It’s easy to imagine the iconic wingback saddled up to a fireplace or in a quiet nook, but, as evidenced by this mid-century Montecito, California, home by Brown Design Group, it works just as well at the dining room table. On why he selected the chairs, founder Ryan Brown says, “This particular dining room features a live-edge table with a thick solid walnut top, which restricted us from using armed dining chairs. The wingback chairs provide just enough wrap to the back to feel like an armchair.”

To Bring the Past to the Present 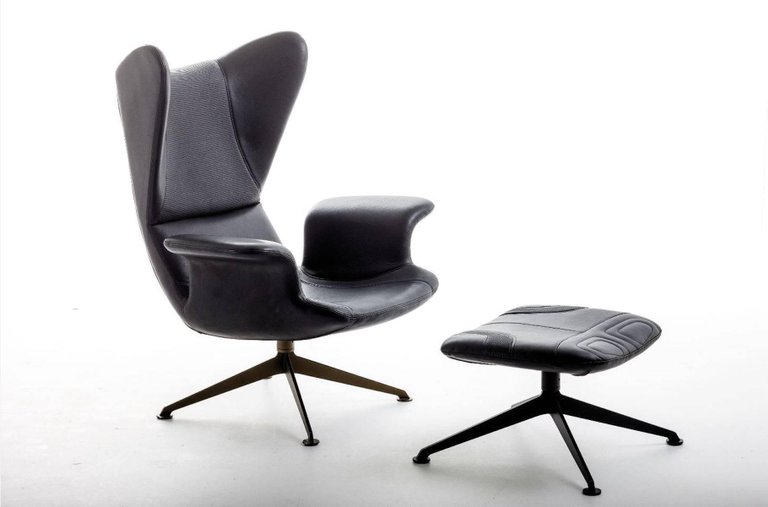 The new Longwave High Back armchair by Diesel for Moroso seems to float in time. Evoking elements of both Scandinavian and Italian mid-century modern design, this chair feels familiar and yet innovative all at once. As Kristina Albaugh of Hundred Mile gallery declares, this chair is “retuning a classic! Like a 1960s motorcycle with a new engine — every bit the attitude but still a modern machine.” 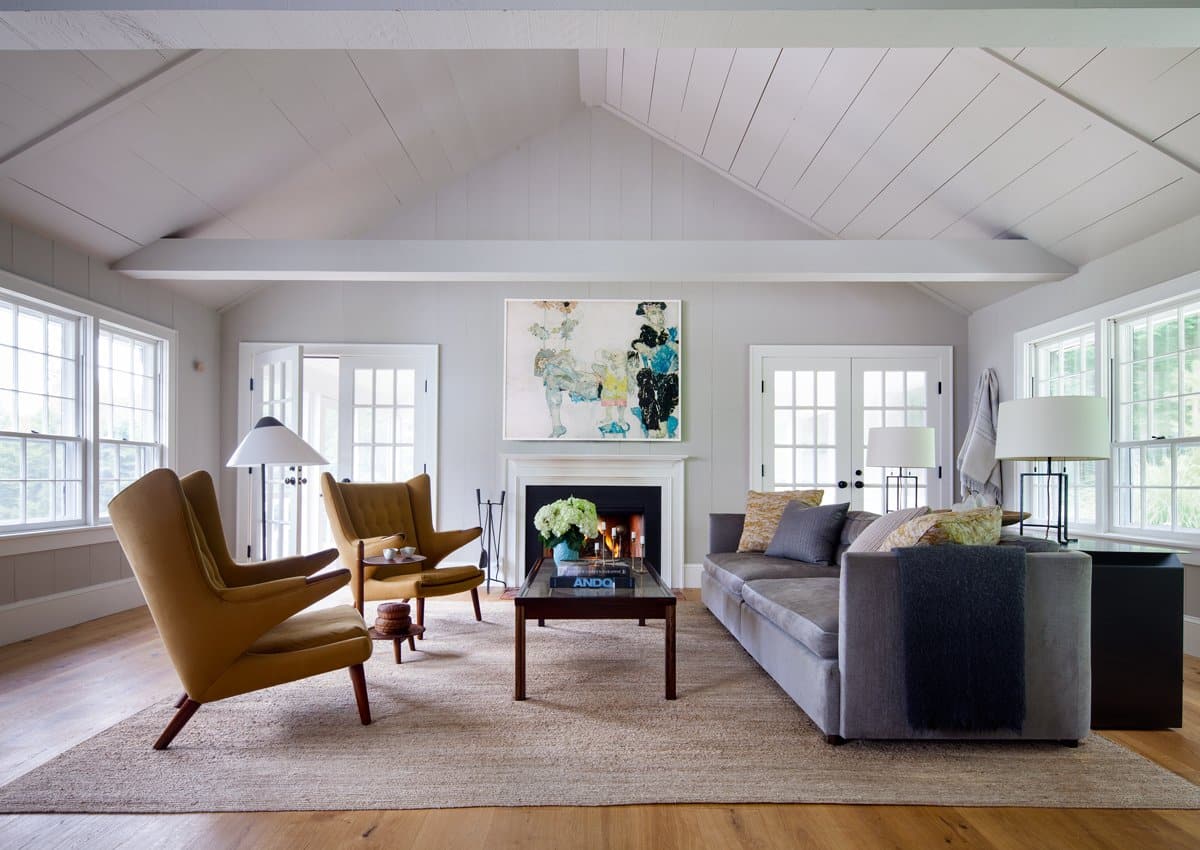 Manhattan-based Shawn Henderson angled a pair of Hans Wegner Papa Bear chairs from Adam Edelsberg to form a warm, friendly conversation space in the living room of his Upstate New York colonial cottage. On why he chose the set, the designer has this to say: “I’m a huge fan of wingbacks — always have been. They fit into any interior — modern or traditional! They provide a sense of sculpture to a room, and they are usually really comfortable.”

For Wrapping Up In 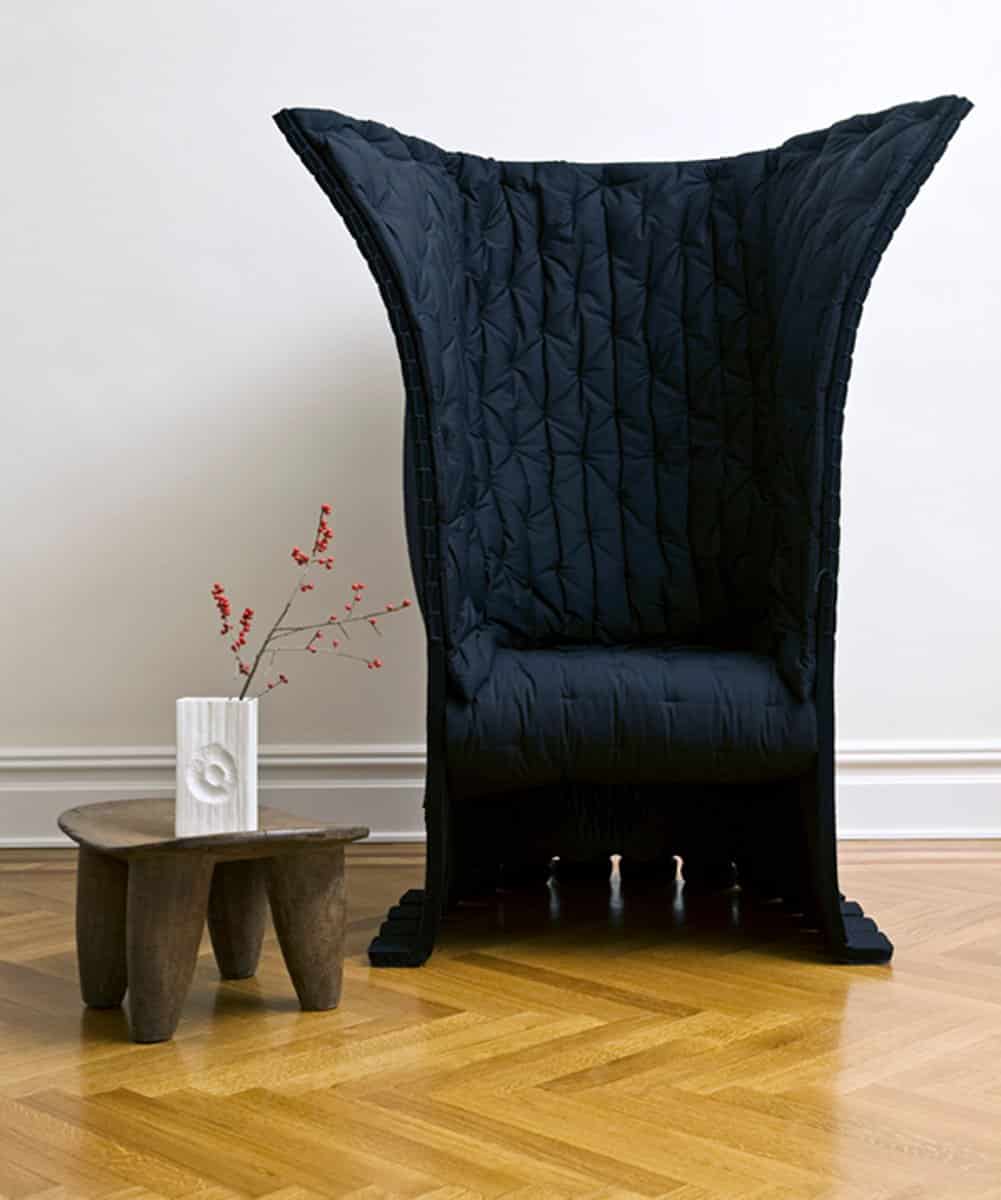 The Feltri chair by Gaetano Pesce, seen here in a Gramercy Park apartment office space designed by Alexandra Lowe, can be folded straight up, in this dramatic wingback style; out, to form almost a club chair; or in on itself for a cocoon-like environment. About the design, Lowe says, “The shape is physically flexible, and the thick felt acts as an acoustic barrier. When reading in the high-back version, distractions are buffered out. It’s a great piece for devouring a book.” 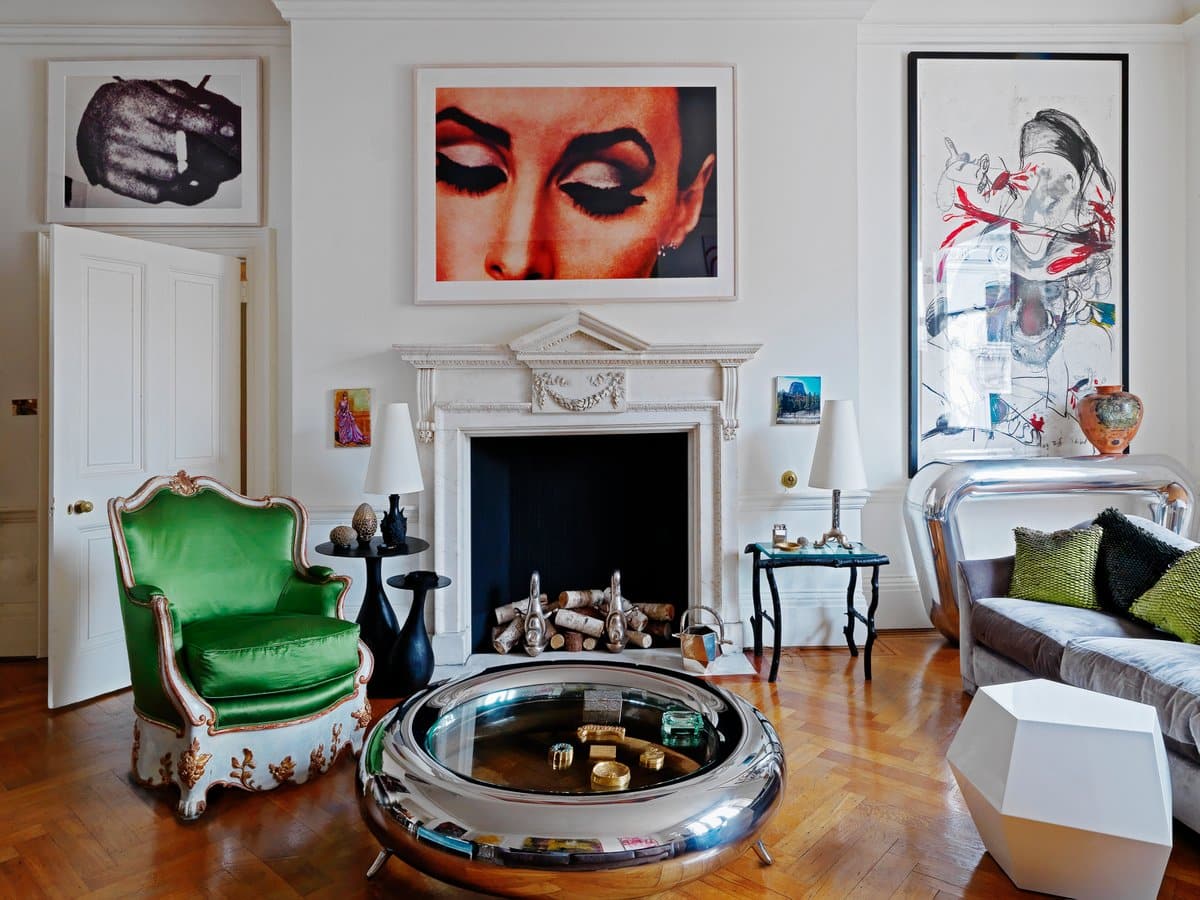 When a top London designer’s most prized possession is a wingback, you take notice. The emerald green satin and robin’s egg blue chair, designed by Emilio Terry in the 1950s for Château de Groussay, home of eccentric patron Carlos de Beistegui, holds its own next to attention-getting contemporary works like the silver ring coffee table by Garouste & Bonetti and bold prints by Richard Prince in this Georgian apartment by Francis Sultana. 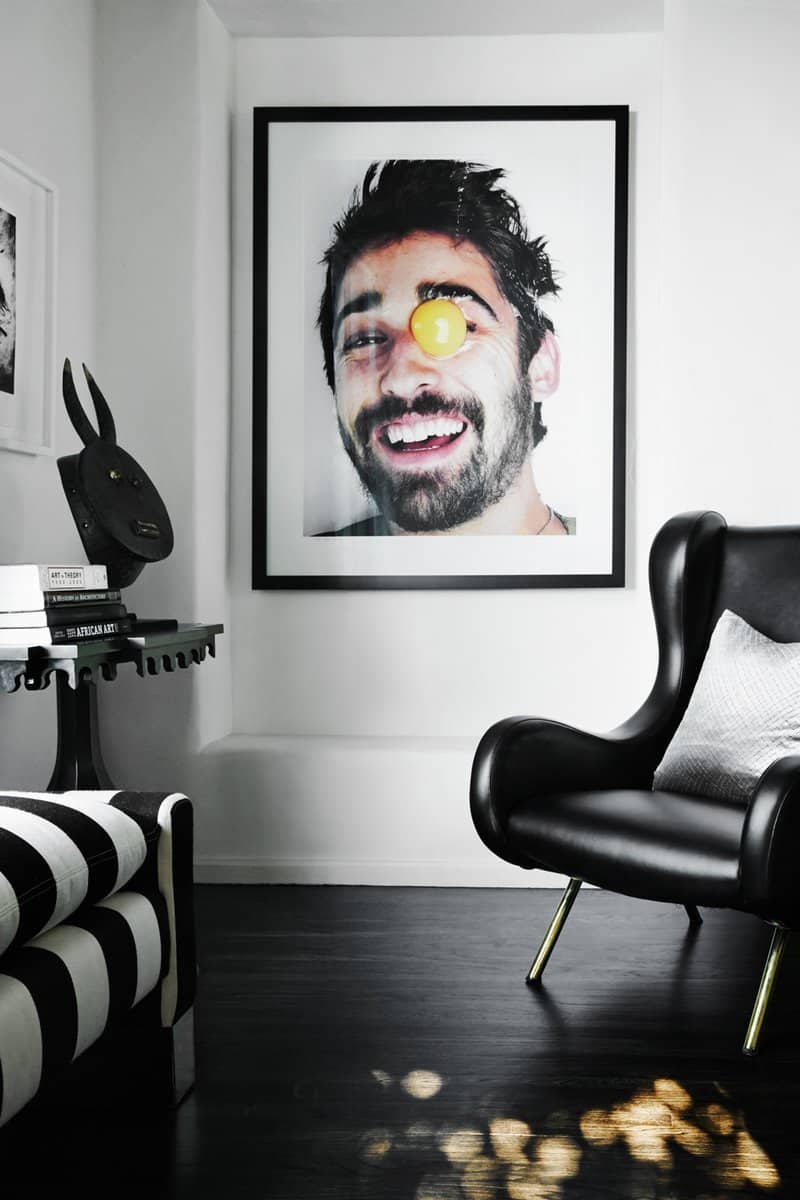 This Marco Zanuso Senior chair from the mid-1950s, upholstered in shiny black leather, adds a pop to an already graphic, rocker-chic home in the Hollywood Hills by Consort. Mat Sanders and Brandon Quattrone of Consort found the chair at Orange in L.A. and had to have it because “the lyrical Italian lines brought a new, whimsical but edgy mix into the room.” 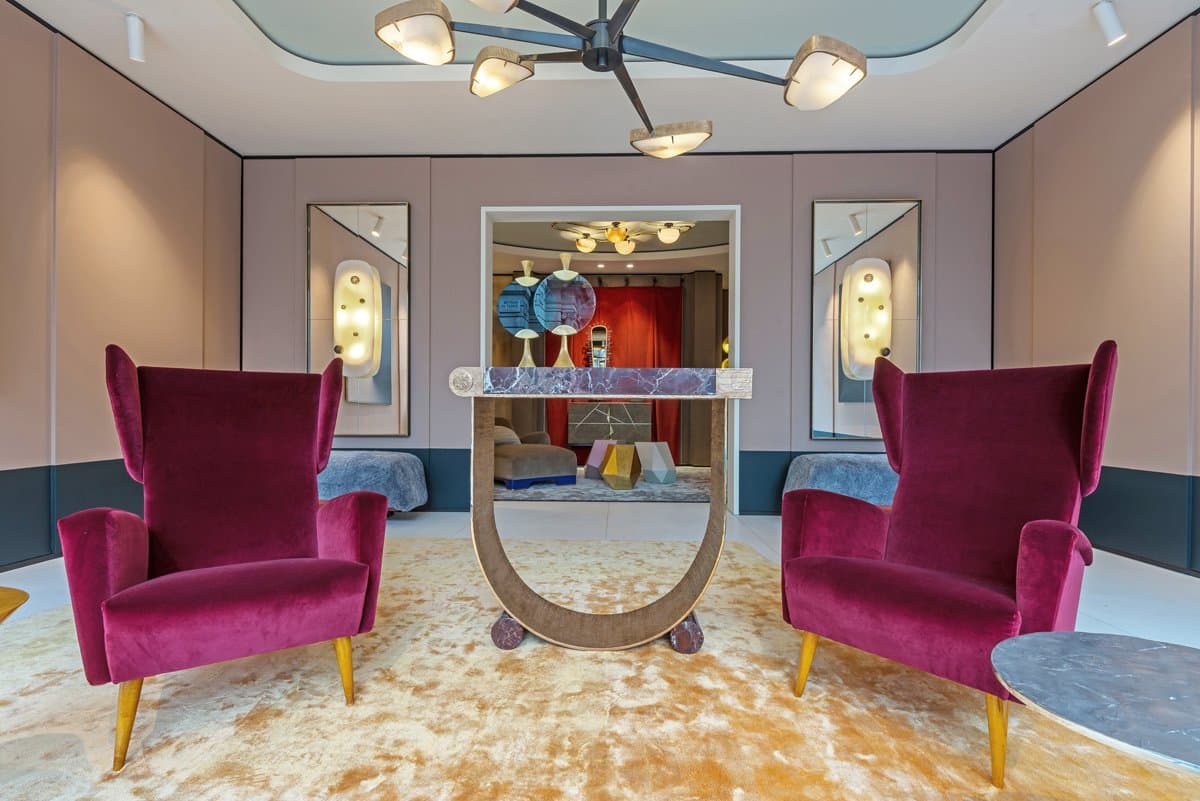 “A good pair of wingback chairs by Giò Ponti or Paolo Buffa can be used as conversation pieces. You can create a little oasis in a room where a couple can sit and talk, oblivious to what is happening in the rest of the room,” Rome-based designer Achille Salvagni says about why he loves wingbacks. Here, a pair of 1955 Ponti chairs in a striking velvet upholstery sit on either side of a Diomede console table and under a Spider Jewel chandelier, both created by Salvagni. 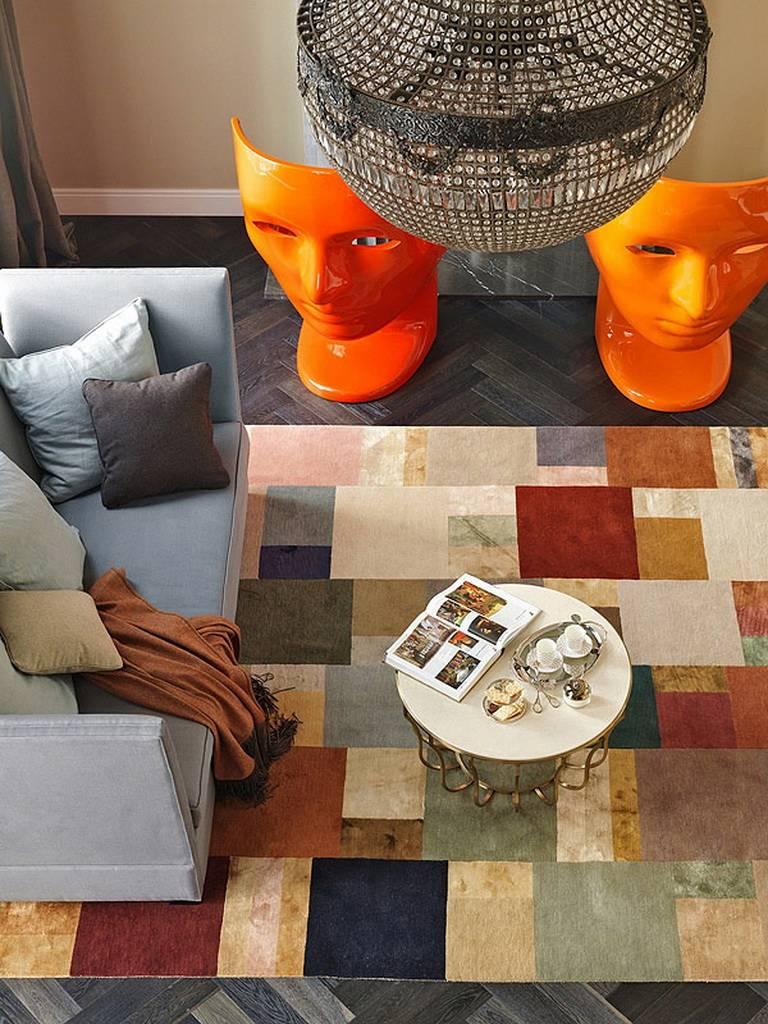 Italian architect and product designer Fabio Novembre is no stranger to shock. He’s designed a couch that appears to be tilting and colorful Murano glassware shaped like oversize pills. So while its shape may be a tame for Novembre, the Nemo chair, in the form of a human head, is a far stretch from the classic wing chair, and yet it fits all the basic requirements. 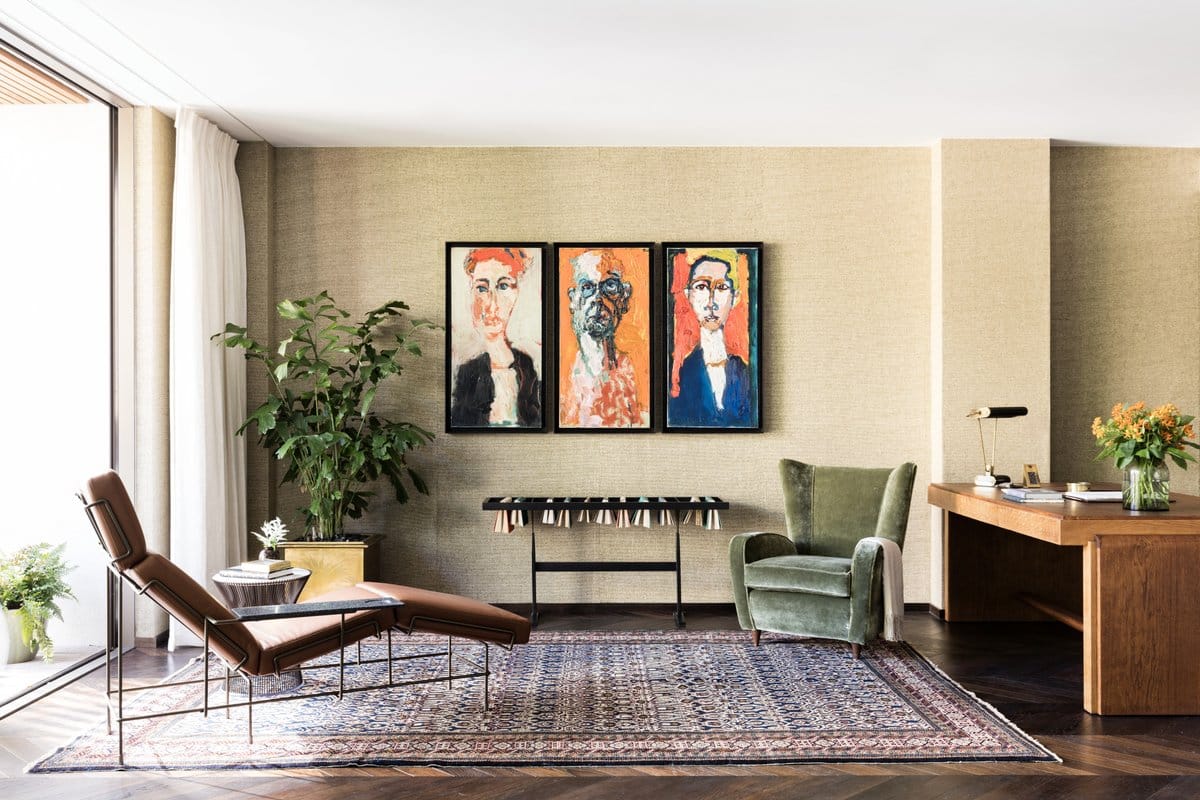 “The height and sculptural shape of the wingback are a great way of breaking up the levels of an open-plan space, as sofas, armchairs and coffee tables are normally much lower,” says Sophie Ashby, founder of the London-based Studio Ashby. She chose a circa-1950s Paolo Buffa armchair in sage green velvet to produce that very effect in a home office in Covent Garden. 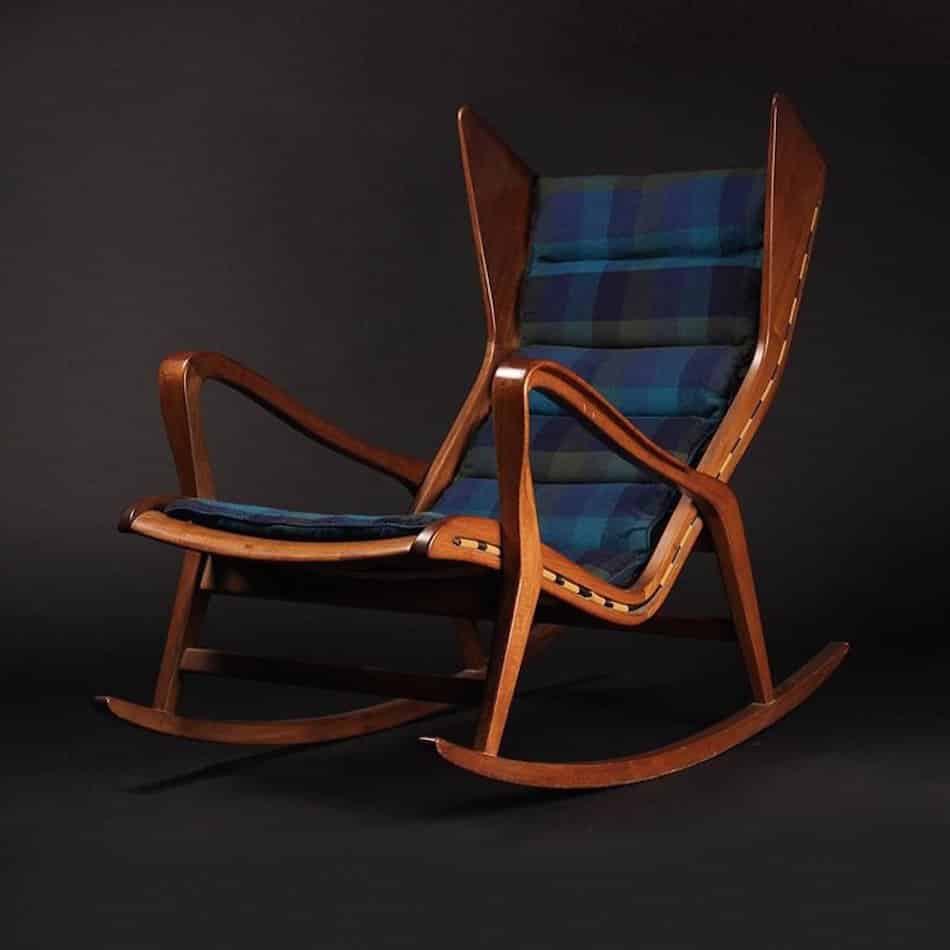 Even rocking chairs can have wings, when conceived by such forward-thinking mid-century Italian designers as Giò Ponti. Made for Cassina in the 1950s and attributed to Ponti, this rare chair is made of solid walnut and has rubber straps for extra comfort along the lounge-ready inclined back. 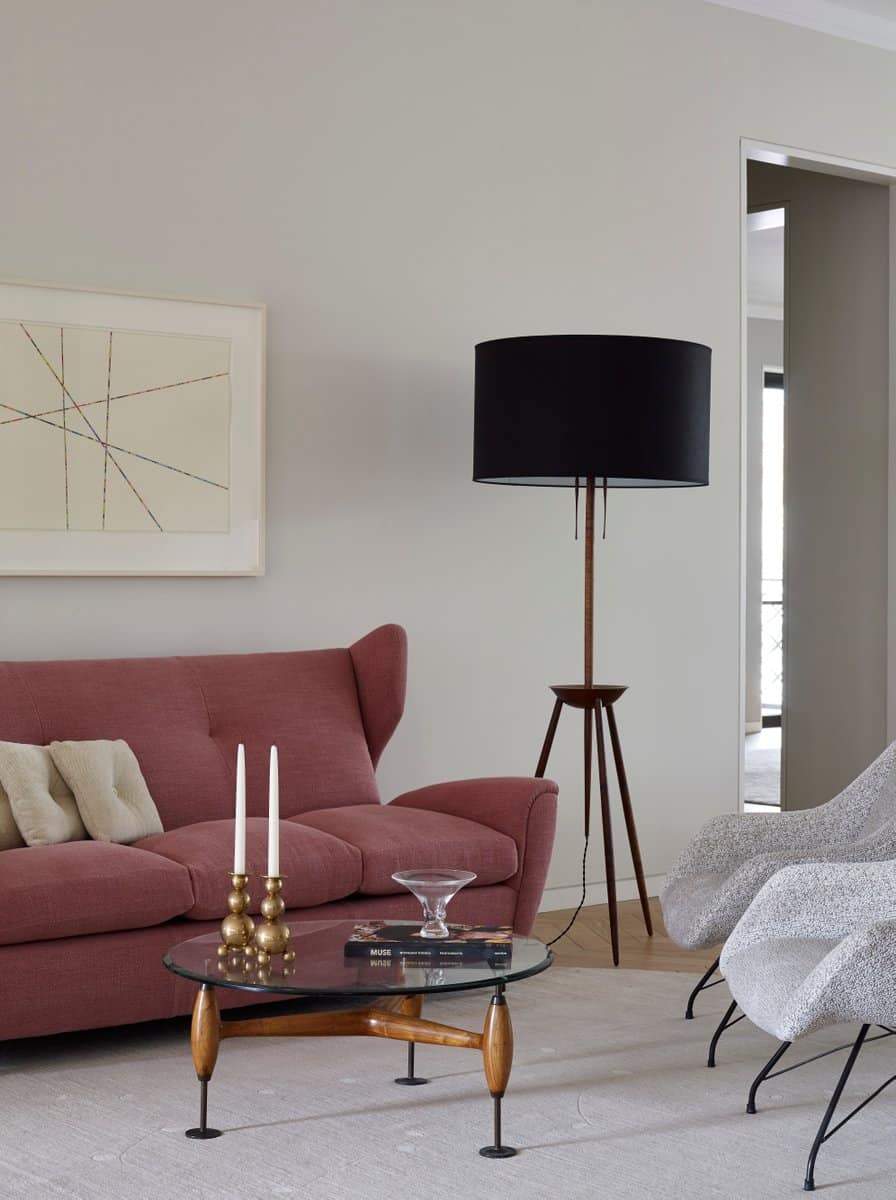 Often, the wingback is associated with creating an enclosed space for a single person to snuggle up and tune out distractions. But there’s room for several bodies in this circa-1950s sculptural, winged settee from Donzella, which Damon Liss incorporated into an airy Manhattan penthouse.