H 24 in. W 24 in.
Self Portrait: Yield to Change
Located in Detroit, MI
Oil on wood panel
Category

H 24 in. W 36 in.
The Refrigerator
Located in Detroit, MI
Oil on wood panel
Category

H 24 in. W 24 in.
Self Portrait: Control
Located in Detroit, MI
Oil on wood panel
Category

H 24 in. W 24 in.
A Constellation in Winter
Located in Detroit, MI
Reproduction Print on fabric, metal grommets
Category 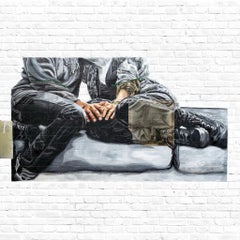 BakPak Durden
A Constellation in Winter, 2020

H 24 in. W 36 in.
Get Updated with New Arrivals
Save "Bakpak Durden", and we’ll notify you when there are new listings in this category.

Bakpak Durden For Sale on 1stDibs

Surely you’ll find the exact bakpak durden you’re seeking on 1stDibs — we’ve got a vast assortment for sale. When looking for the right bakpak durden for your space, you can search on 1stDibs by color — popular works were created in bold and neutral palettes with elements of brown, black, gray and blue. Artworks like these — often created in oil paint, paint and panel — can elevate any room of your home.

How Much is a Bakpak Durden?

A bakpak durden can differ in price owing to various characteristics — the average selling price for items in our inventory is $6,700, while the lowest priced sells for $150 and the highest can go for as much as $13,000.

A Close Look at photorealist Art

A direct challenge to Abstract Expressionism’s subjectivity and gestural vigor, Photorealism was informed by the Pop predilection for representational imagery, popular iconography and tools, like projectors and airbrushes, borrowed from the worlds of commercial art and design.

Whether gritty or gleaming, the subject matter favored by Photorealists is instantly, if vaguely, familiar. It’s the stuff of yellowing snapshots and fugitive memories. The bland and the garish alike flicker between crystal-clear reality and dreamy illusion, inviting the viewer to contemplate a single moment rather than igniting a story.

The virtues of the “photo” in Photorealist art — infused as they are with dazzling qualities that are easily blurred in reproduction — are as elusive as they are allusive. “Much Photorealist painting has the vacuity of proportion and intent of an idiot-savant, long on look and short on personal timbre,” John Arthur wrote (rather admiringly) in the catalogue essay for Realism/Photorealism, a 1980 exhibition at the Philbrook Museum of Art, in Tulsa, Oklahoma. At its best, Photorealism is a perpetually paused tug-of-war between the sacred and the profane, the general and the specific, the record and the object.

“Robert Bechtle invented Photorealism, in 1963,” says veteran art dealer Louis Meisel. “He took a picture of himself in the mirror with the car outside and then painted it. That was the first one.”

The meaning of the term, which began for Meisel as “a superficial way of defining and promoting a group of painters,” evolved with time, and the core group of Photorealists slowly expanded to include younger artists who traded Rolleiflexes for 60-megapixel cameras, using advanced digital technology to create paintings that transcend the detail of conventional photographs.

Finding the Right Figurative Paintings for You

Figurative art, as opposed to abstract art, retains features from the observable world in its representational depictions of subject matter. Most commonly, figurative paintings reference and explore the human body, but they can also include landscapes, architecture, plants and animals — all portrayed with realism.

While the oldest figurative art dates back tens of thousands of years to cave wall paintings, figurative works made from observation became especially prominent in the early Renaissance. Artists like Michelangelo, Leonardo da Vinci and other Renaissance masters created naturalistic representations of their subjects.

Pablo Picasso is lauded for laying the foundation for modern figurative art in the 1920s. Although abstracted, this work held a strong connection to representing people and other subjects. Other famous figurative artists include Francis Bacon and Lucian Freud. Figurative art in the 20th century would span such diverse genres as Expressionism, Pop art and Surrealism.

Today, a number of figural artists — such as Sedrick Huckaby, Daisy Patton and Eileen Cooper — are making art that uses the human body as its subject.

Because figurative art represents subjects from the real world, natural colors are common in these paintings. A piece of figurative art can be an exciting starting point for setting a tone and creating a color palette in a room.

Browse an extensive collection of figurative paintings on 1stDibs.