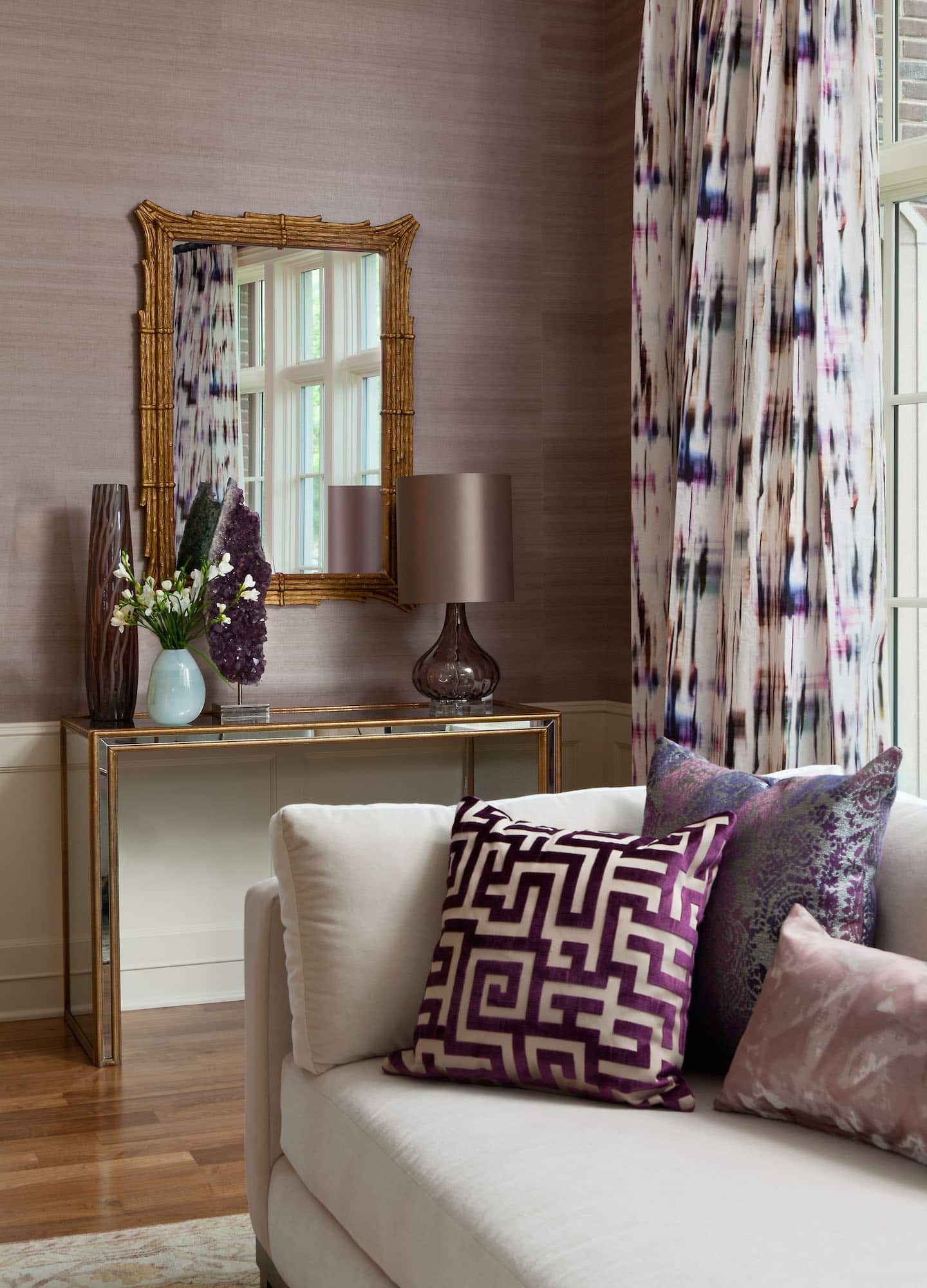 All photos by Emily Minton Redfield

Not long ago, the idea of patterned upholstery and wallpaper might have conjured visions of grandma’s house — an old-fashioned aesthetic filled with paisley prints and frilly florals. But the narrative has changed, and interior designers like Denver-based Andrea Schumacher have mastered the art of bringing patterned decor into the 21st century.

Perhaps it’s her background in set design — in a city where clean lines and natural elements like wood and stone usually take the spotlight — that drives Schumacher to add a little drama to her projects. Deploying every motif from Asian pagodas and Greek keys to painterly splatters and hard-edge geometries, the designer artfully mixes modern and traditional styles, using a combination of large- and small-scale prints, layered textures and palettes both muted and bold.

But, there is such a thing as too much. “You have to decide when it’s done,” Schumacher says. “It’s kind of like an artist walking away from her canvas and saying, ‘I need to stop. This work is finished.’”

Read on to find out her best practices for infusing your interiors with the next generation of pattern. 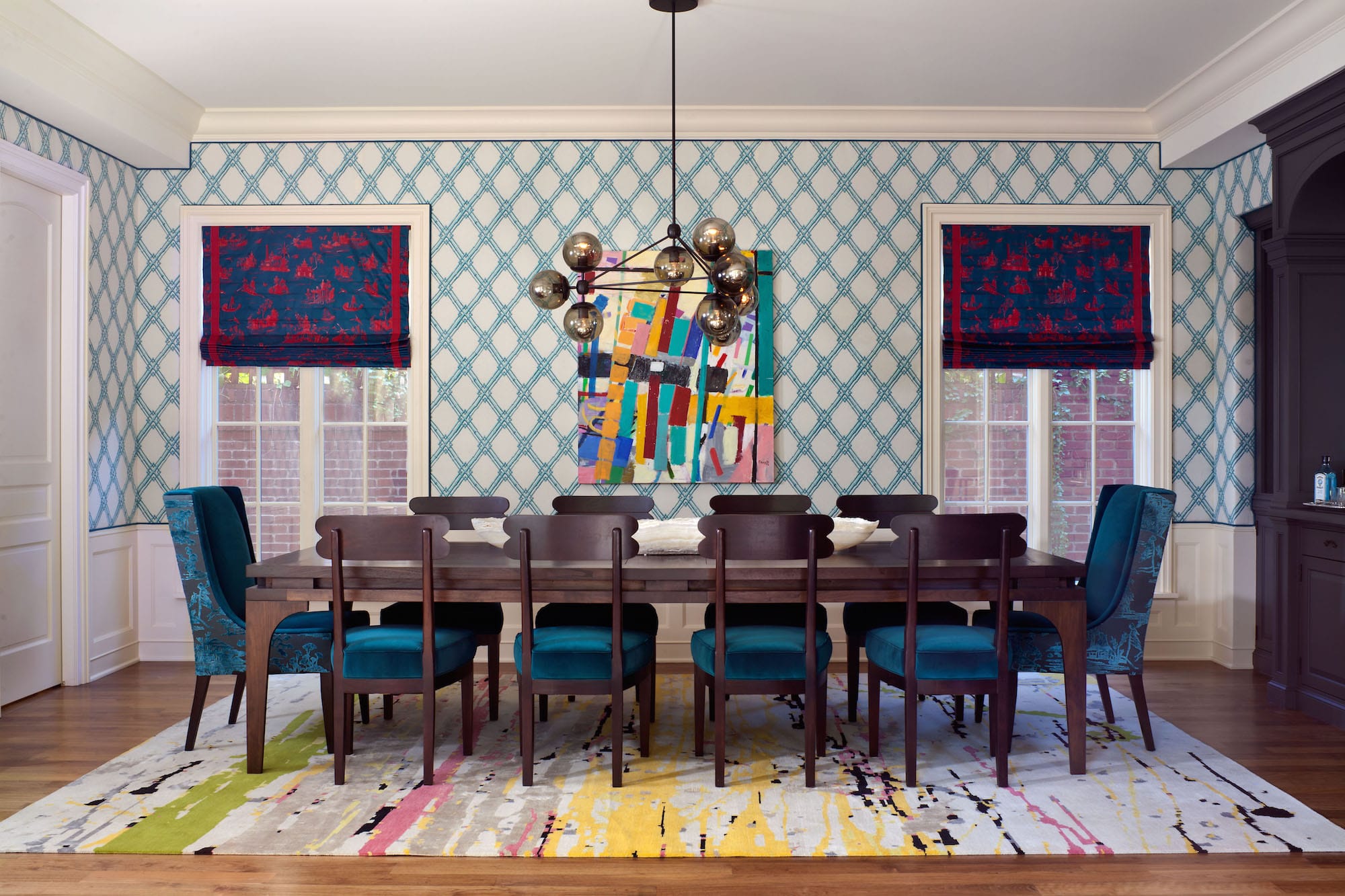 When it comes to decorating with pattern, there’s no need to be timid. Schumacher suggests going bold by starting with a large-scale print that has a lot of different hues and using that palette as a springboard for additional prints. “You only live once,” she says. “Really go for it — don’t be afraid of color.”

Pairing traditional and mid-century elements and using an unusual mix of patterns can yield conversation-starting spaces, as seen in a dining room Schumacher designed for a family in Denver. “We wanted to do an updated and fun take on a classic, keeping kid-friendliness and color at the forefront,” she says. “You would think the prints we chose were a bit disjointed, but I love how they give the room a sense of movement.” 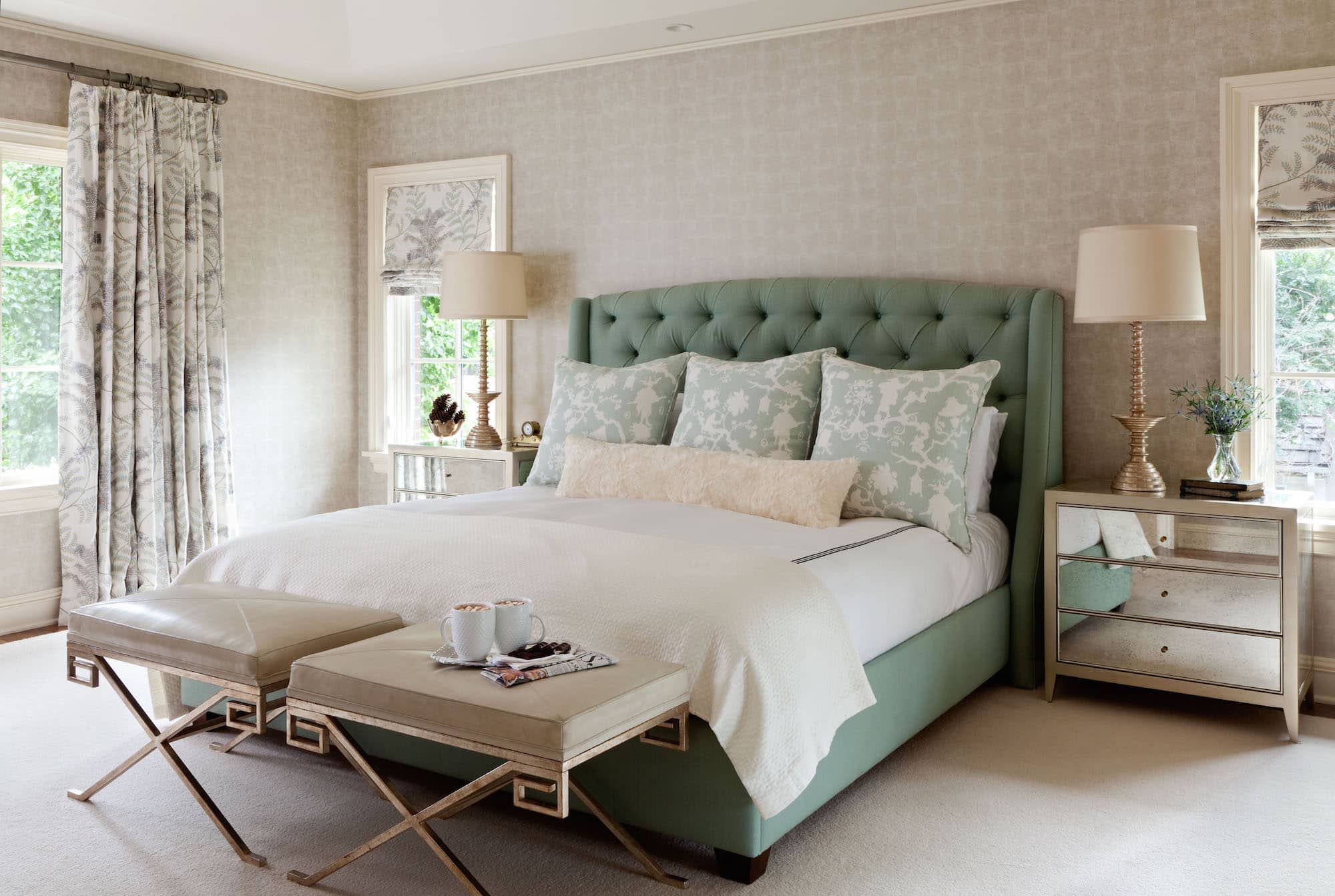 Tamba wallpaper by Osborne & Little sets a tranquil mood in the bedroom. Further subtleties come from custom draperies in Rochelle by Colefax and Fowler and custom pillows donning a modernized chinoiserie Shantung Silhouette print by Schumacher.

Dramatic and bold might not work for everyone, but that doesn’t mean you have to sacrifice interest. For a more understated effect, look for patterns that follow a similarly neutral, soft colorway and layer them together to create a room that is still full of personality.

“The wallpaper was our inspiration for the design of this master bedroom,” she says, noting that classic, elegant taste runs in the family as the client’s mother has the same wallcovering in her own master bedroom. “It provided the perfect foundation for the room’s soothing palette.” 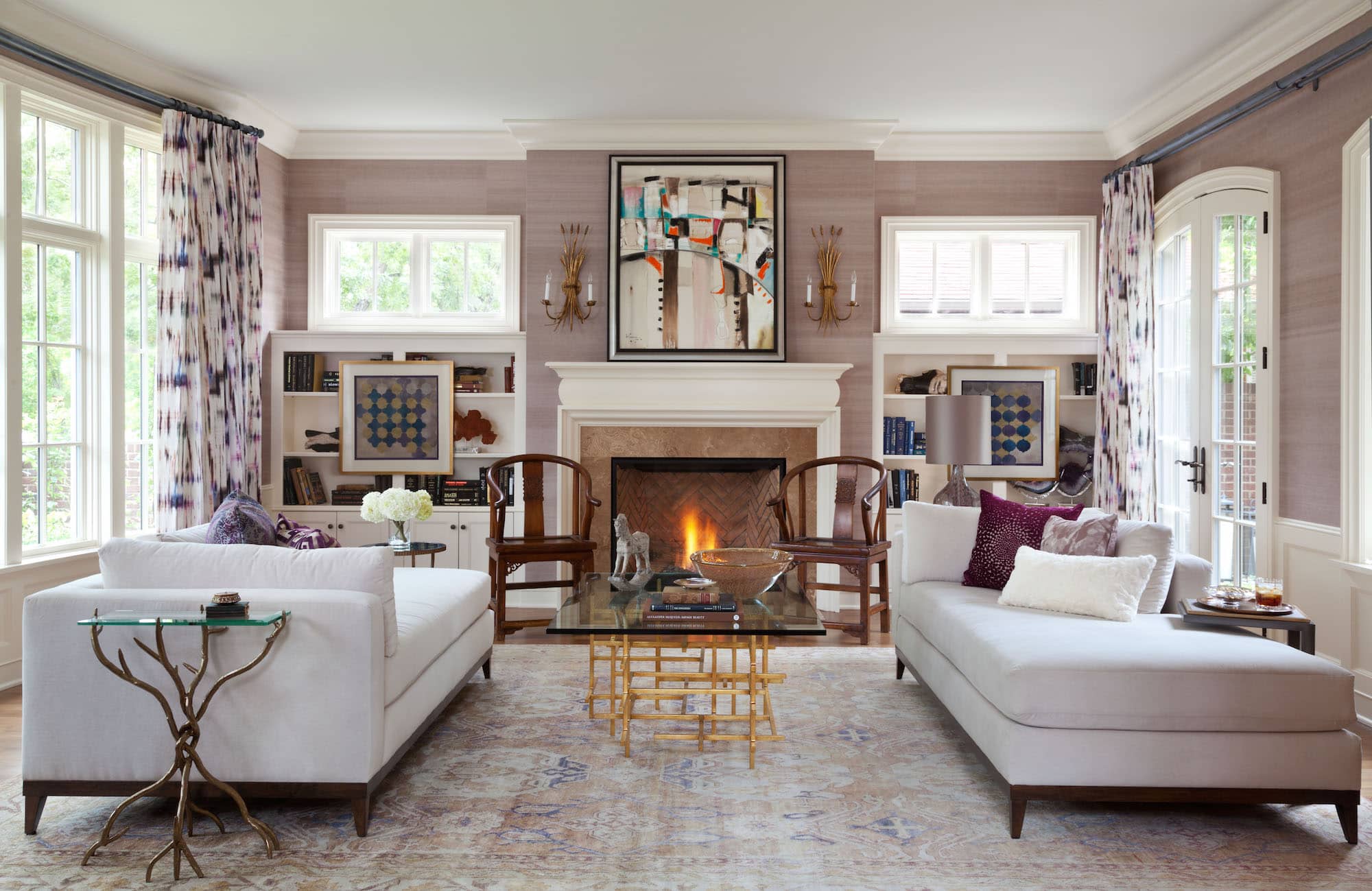 Add interest to a monochromatic color scheme by using varying shades within a similar palette, bringing in hints of pattern both subtle and muted through the artwork, draperies and area rugs. Generous use of a complementary solid will keep all of the different patterns balanced.

“Colors create richness and mood, while patterns create depth and interest,” Schumacher says. “With this project, we wanted there to be a unique color story. We kept the hues light at the front of the house and then infused a more vibrant palette toward the back of the home. The common color thread throughout this living space feels really feminine and sophisticated.” 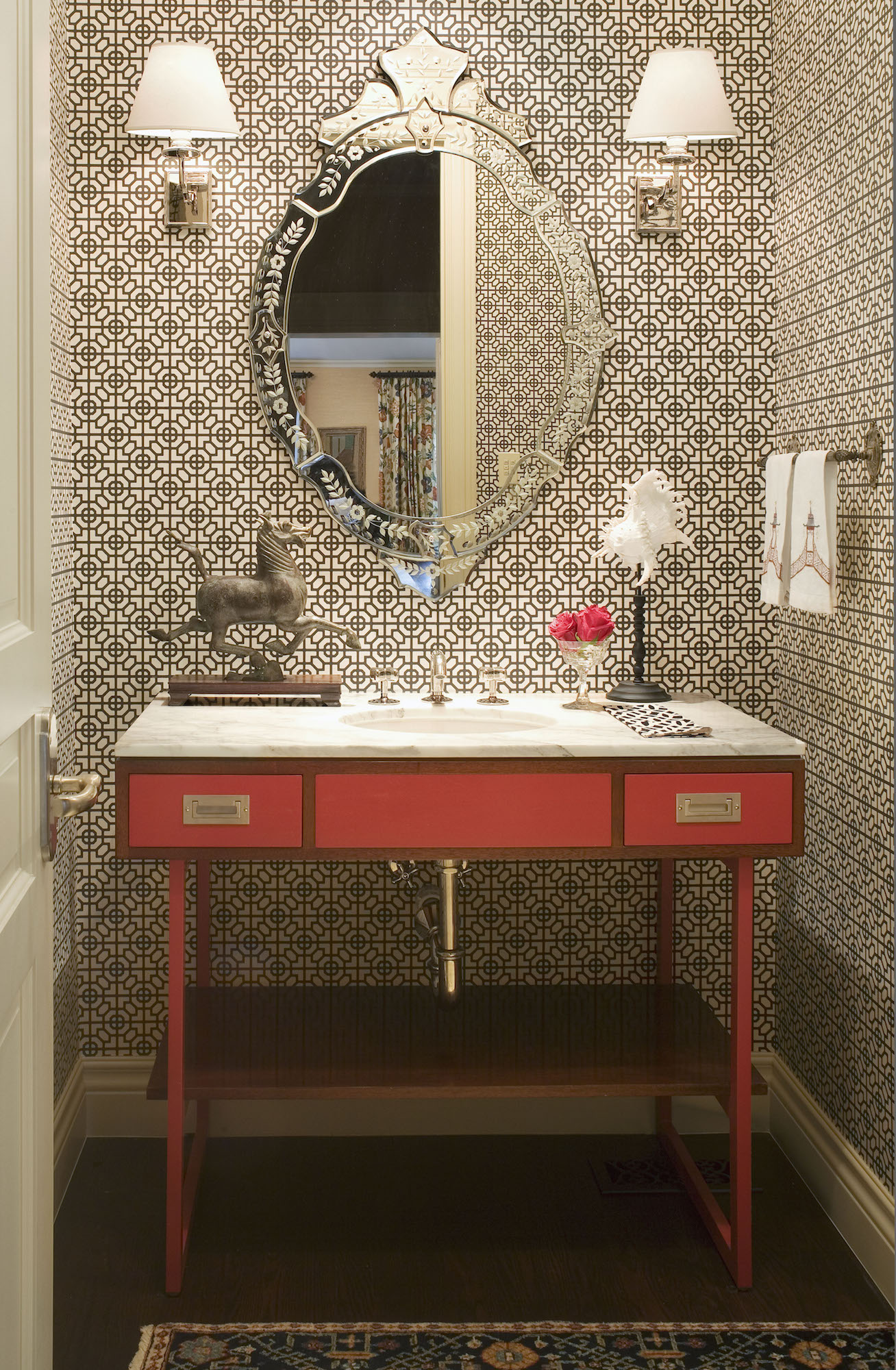 Schumacher transformed a petite powder room into a statement-making space with a vibrant red vanity from Waterworks and Sussex wallpaper in black and white by Designers Guild.

“I’m wild for pattern in a small space,” Schumacher says. “For example, a powder room is a perfect opportunity to take a risk and do something completely unexpected. Since powder rooms are typically small, it isn’t as cost prohibitive as a larger space, and when you are on to the next thing it’s much easier to change.”

And just because you’re outfitting a small space with pattern doesn’t necessarily mean your patterns have to downsize. Whether it’s an oversized pattern or a small, repeating one, Schumacher suggests you go with what your heart tells you. “If a print sings to you, use it, regardless of its scale,” she says. “In a larger space, though, prints in varying sizes help to distribute an overall color scheme and tell a story.” 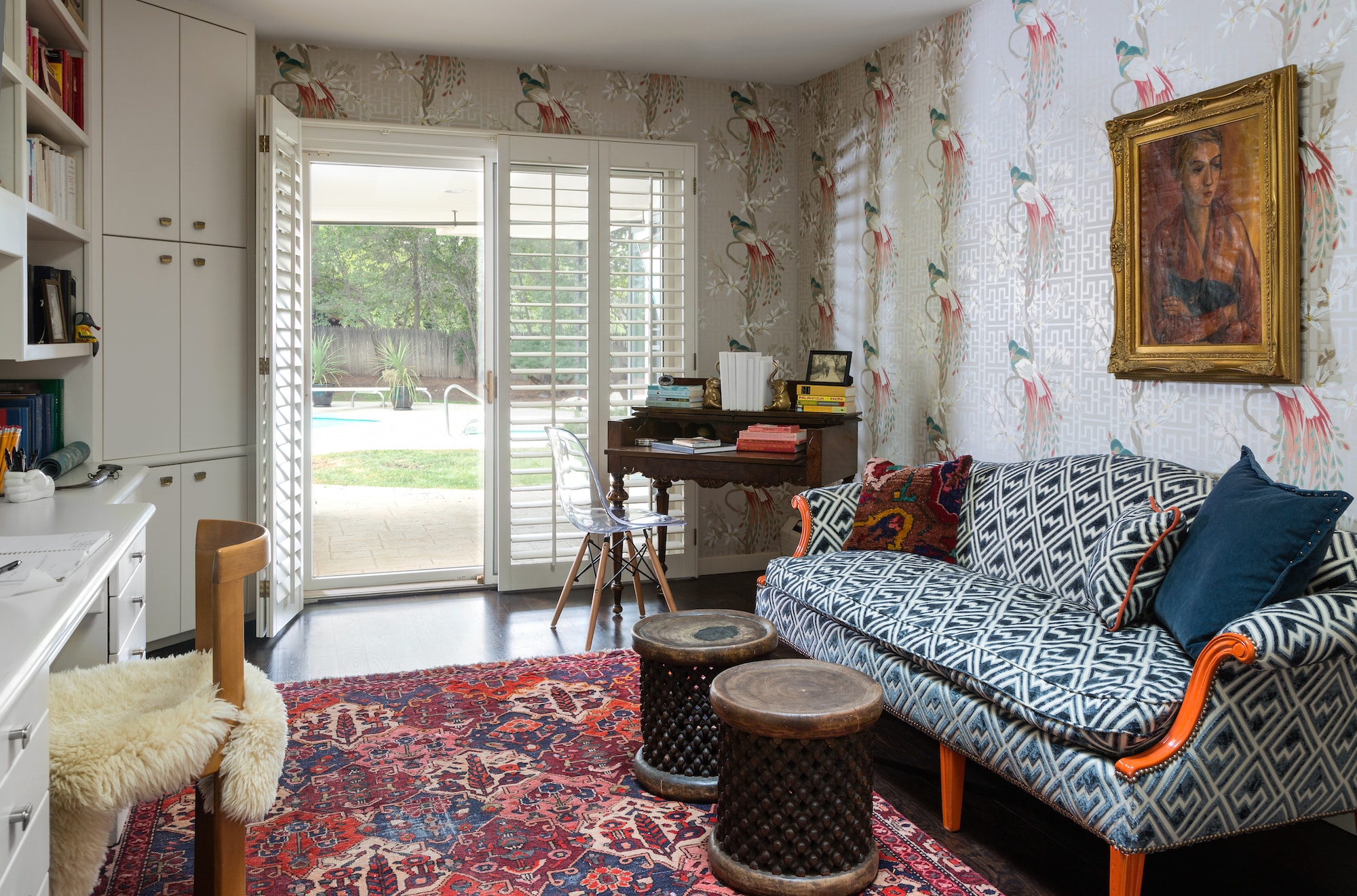 Schumacher’s own study in Bow Mar, Colorado, holds true to her curated-over-time philosophy, filled with pieces that she’s collected over the years. Here, she followed her rule of three with Nina Campbell’s whimsical Paradiso wallcovering, a modern geometric print on the sofa and a vintage Kurdish rug.

Schumacher likes for rooms to feel like they’ve been put together over time. “I’m all about retaining things — taking what people already have and repurposing or recovering them,” she says, “and then blending in different styles, custom pieces and antiques with items they already own.”

This sort of approach typically means mixing traditional patterns with modern ones. In order to create a cohesive feel, the designer says a good beginning rule of thumb is to mix three different prints in three different scales: one with an organic feel (think floral), another with a geometric pattern and a time-tested classic print. 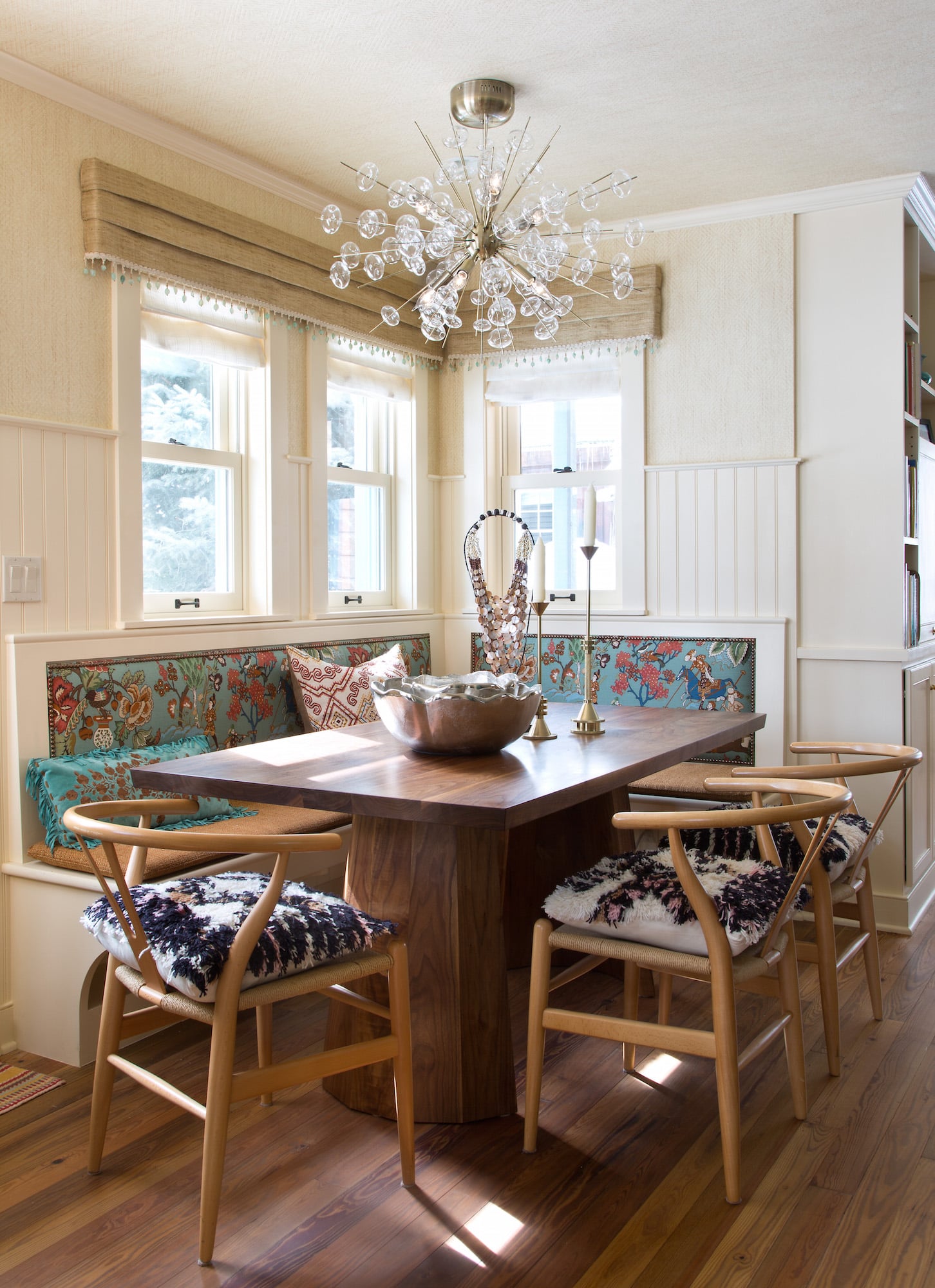 For a dining space in Crested Butte, Colorado, the designer upholstered a banquette in Hurlingham fabric from Cowtan & Tout and wrapped the space — even the ceiling — with Phillip Jeffries’s Diamond Weave grass-cloth wallcovering in Richmond Bisque.

Pattern doesn’t only have to come in the form of fabrics. Yes, you can upholster pieces of furniture and weave in accessories such as throw pillows and cushions, but other surfaces should also be considered. Even the wood grain in hardwood floors or the lines of wainscoting can have an effect on the overall pattern of a space.

But Schumacher points to perhaps a less obvious point of inspiration. “Ceilings are often overlooked,” she says. “Go the distance! Add that last bit of panache. Wallpapered ceilings can add a ton of drama or be just enough to create a cozier atmosphere.” 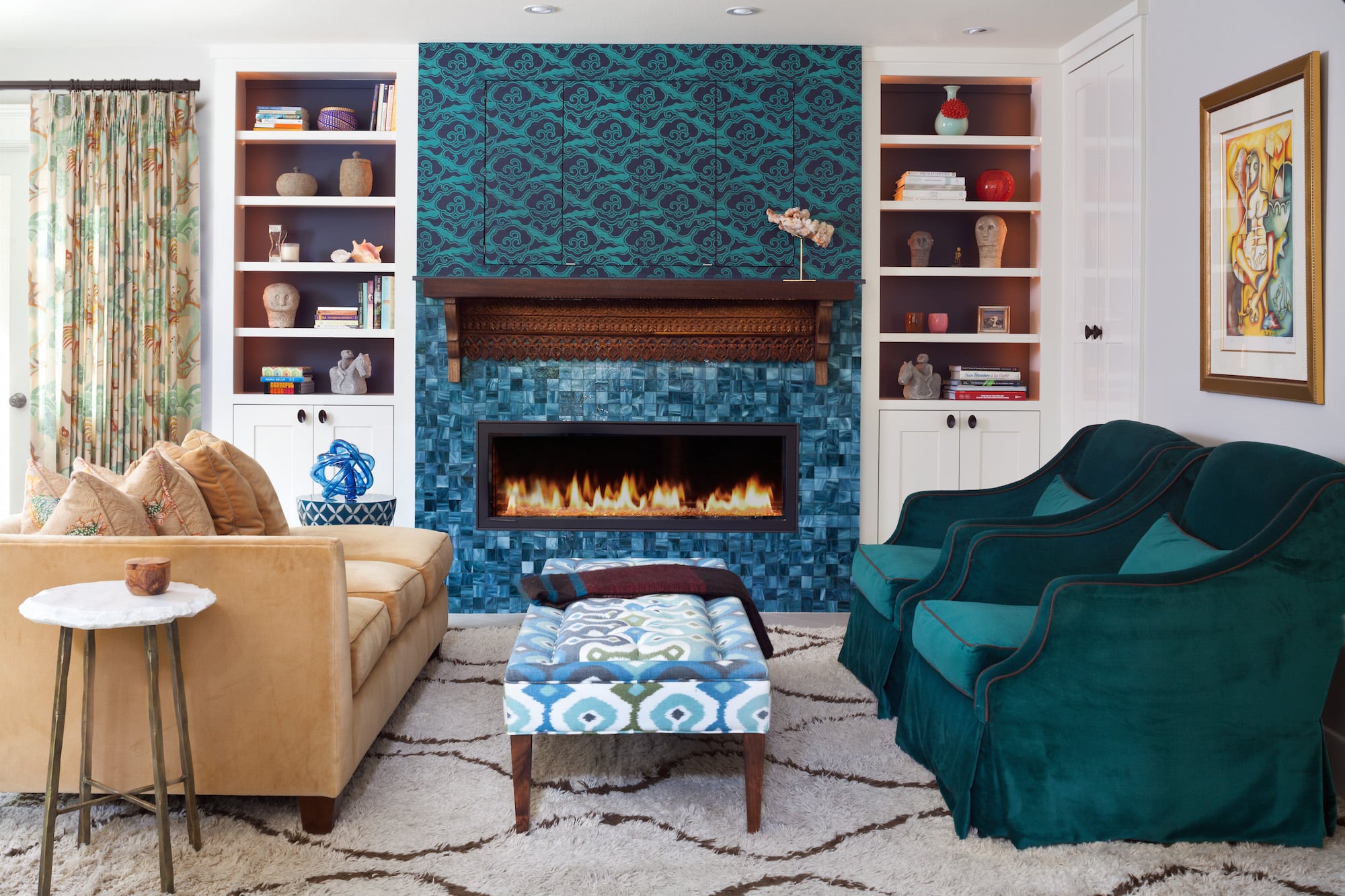 There is something powerful about designing a room so that some of the patterns command your attention and make a statement while the others act as supporting elements. Take this Boulder, Colorado, residence for instance, which was designed by Schumacher for a client with bohemian tastes who was not afraid to take risks.

The fireplace became the star of the room with the help of an oversized, repeating motif and small tiles that were arranged to create a larger patterned landscape. “We didn’t want the TV to be the focal point of this space,” Schumacher says. “So we created a custom cabinet with folding doors above the fireplace, creating visual interest in our client’s favorite colors — blue and green.”