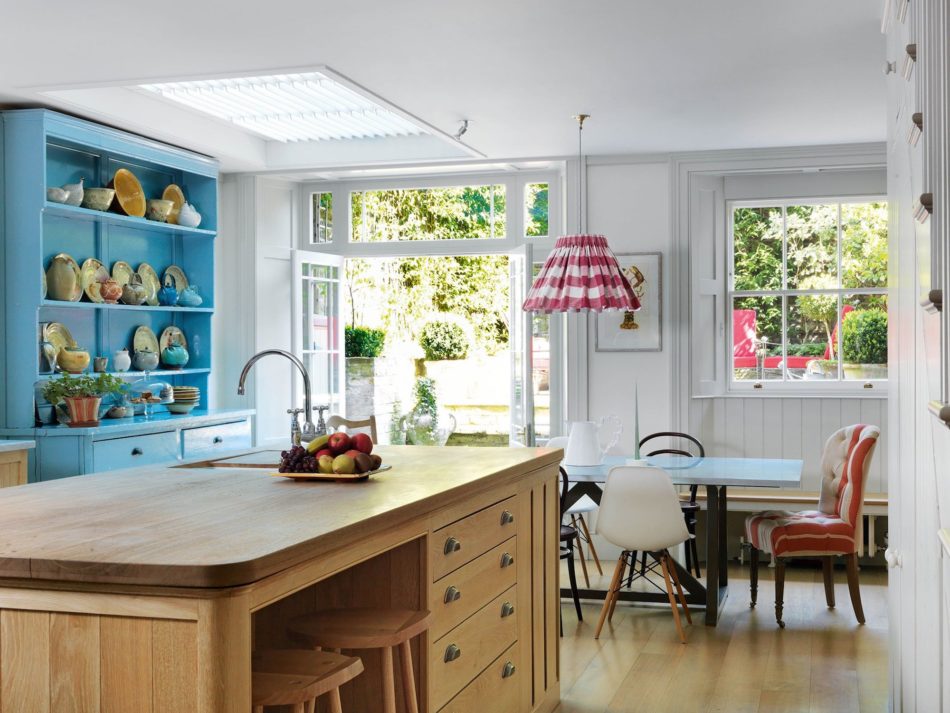 There’s no shortage of charm in this Hugh Leslie-designed kitchen and dining space, occupying an early 1860s terrace house in London. “We found the antique painted dresser, which was the starting point,” Leslie says. “We wanted the room to feel furnished rather than being simply a fitted kitchen,” he adds, describing the modern mix that includes Thonet and Eames chairs alongside button-tufted seating. His team also painted the paneling and installed traditional French doors and sash window. Photo by Simon Brown 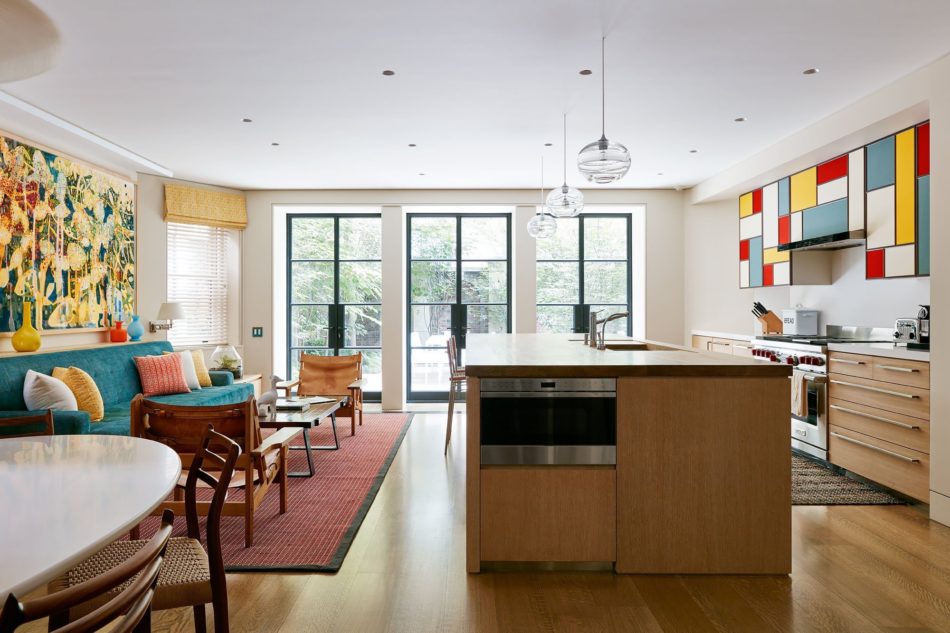 For a client’s second home, a townhouse on New York’s Upper East Side, Leslie knew the open-concept kitchen needed to be family friendly as well as entertaining-ready. He created the lacquered kitchen cupboards to add color and pattern, while a bold sofa of his design anchors the seating area. “Being on the ground floor in a six-story house, natural light was limited here, so we wanted the colors to be as bright and cheerful as possible,” Leslie says. Photo by Lucas Allen 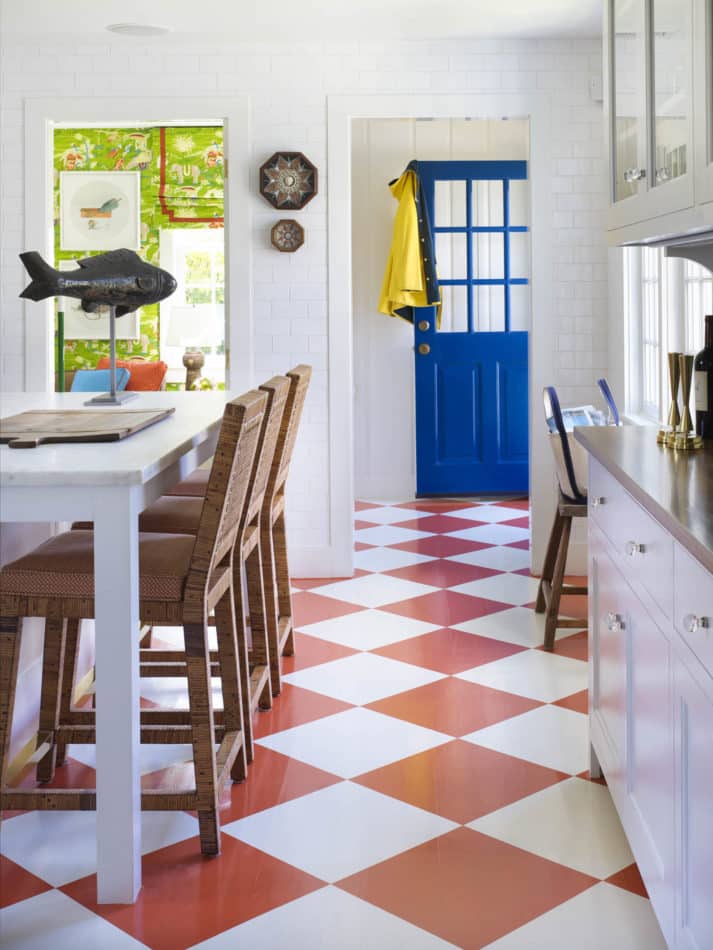 Before designer Gary McBournie came into the picture, this kitchen inside a Nantucket home was stuck with what he describes as a “1950s, ’60s and ’70s decor look.” To modernize the space, McBournie created an “updated mid-century kitchen,” as he puts it. The result is a crisp, white space punctuated with bright, uplifting color from the ground up. “Orange is my signature, and its a very happy hue,” McBournie says of painted checkerboard floor, which reiterates the mid-century vibe. Photo by Gordon Beall 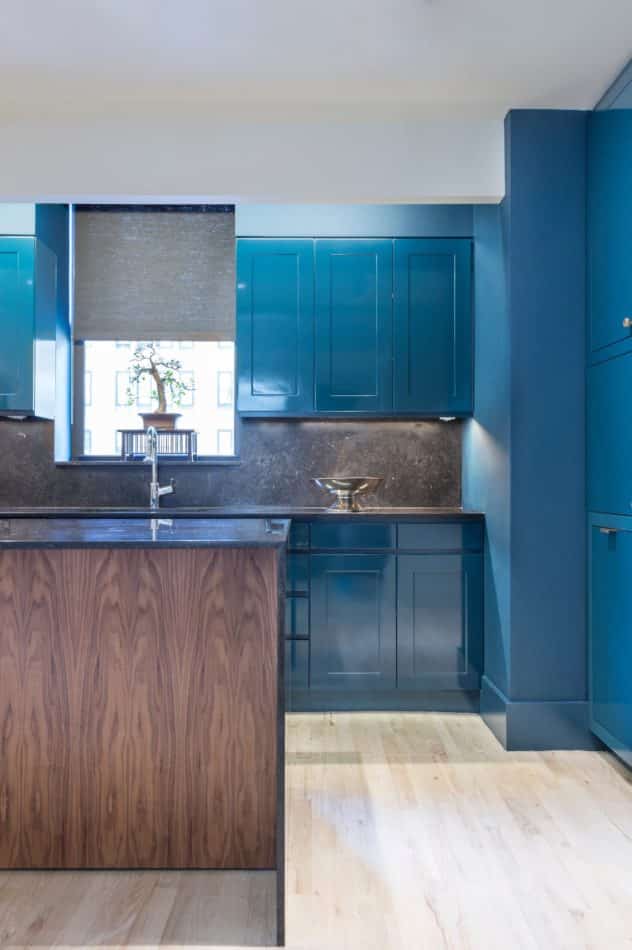 “Teals and shades of turquoise are timeless,” says Drew McGukin, who went full force with peacock blue in this streamlined kitchen inside a family’s New York penthouse. “This particular hue is rich and saturated but also classic enough to blend into an overall design scheme as calming and neutral,” he says. As a visual counterpoint to the bold color, McGukin incorporated natural elements with beautiful textures, such as a black limestone backsplash, a rosewood-paneled island and bleached-oak floors. Photo by Brett Beyer 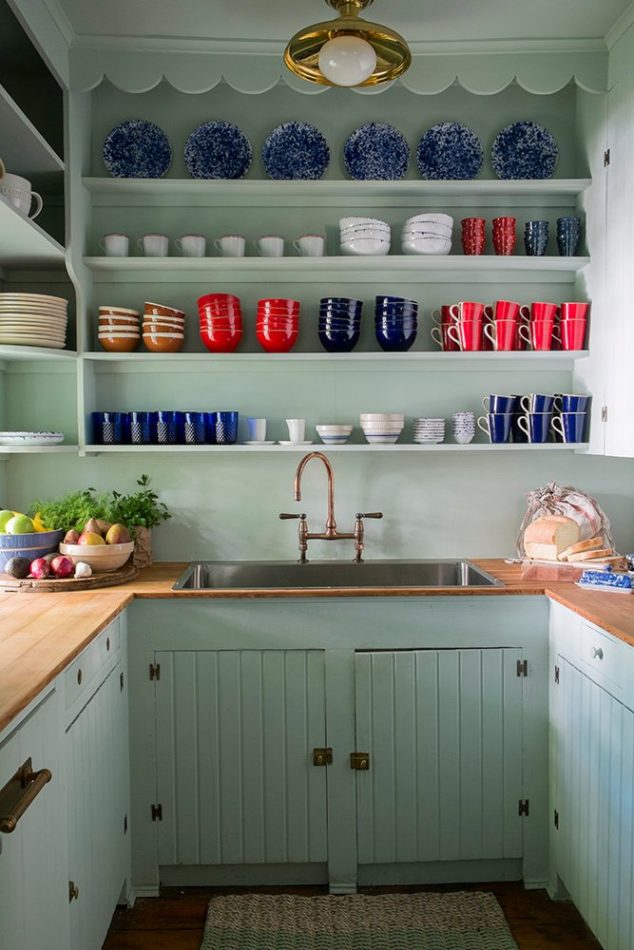 In her own weekend getaway near Sag Harbor, New York, a 1790 whaler’s cottage, Michelle Smith of Studio MRS Interiors (who’s known for her tailored and neutral interiors) took a relaxed approach to the kitchen. With its country-home charm and an ocean-inspired palette, this tiny prep spot captures Smith’s keen eye for mixing styles and color. Photo by Joy Sohn 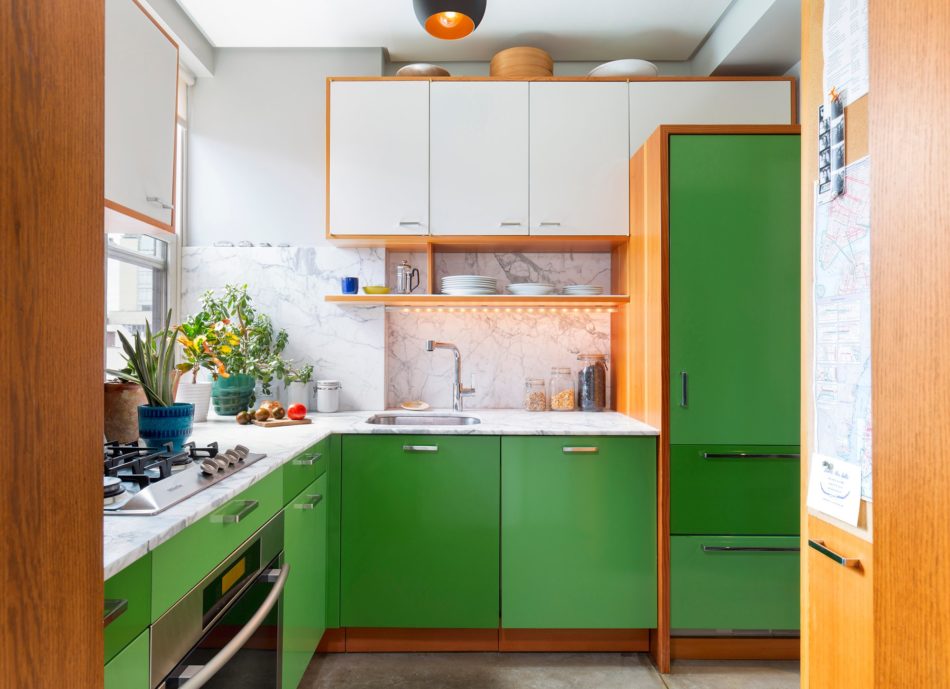 Architect Andrew Franz took a retro-modern approach to this compact Manhattan kitchen, located in an ornate 1890s building. “We wanted something lighter and fresher to counterbalance the moldings and Victorian overtones,” says Franz, pointing out that the cabinets feature two shades of green inspired by Castelvetrano olives. “We chose the colors for impact, the open shelves to increase the depth and sense of space, and the fir to relate to the existing floors in the apartment.” Photo by Albert Vecerka/Esto 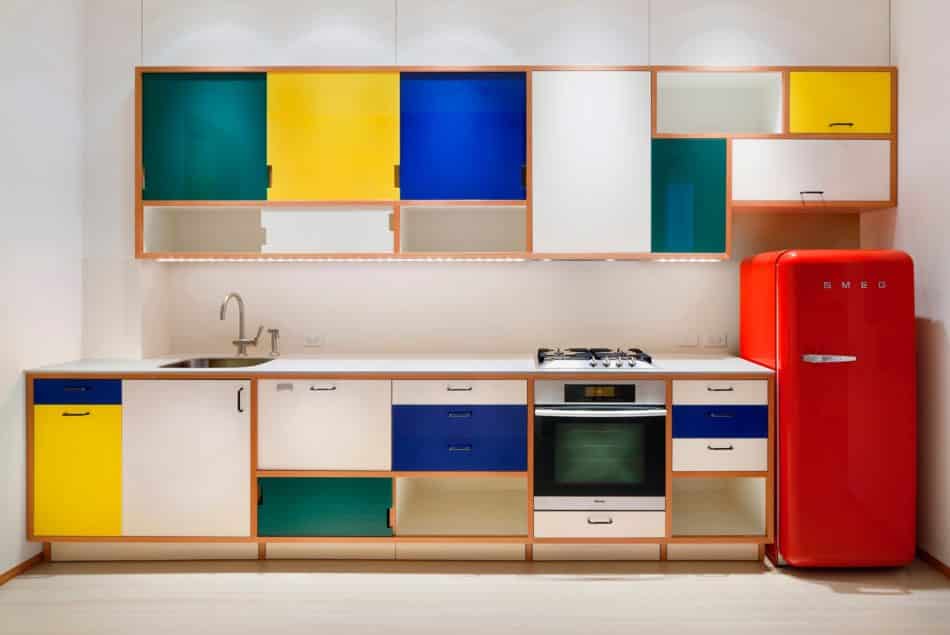 To keep with the 1950s and ’60s design focus of a filmmaker’s downtown New York apartment, Franz made certain that the kitchen did not, as he says, “recede into the background,” moving it from the back of the home to the middle. The color palette was inspired by the works of Charles and Ray Eames. “It incorporates materials being used throughout the home, such as fir, Plexiglas, Corian and metal but in bold colors,” Franz says. Photo by Albert Vecerka/Esto 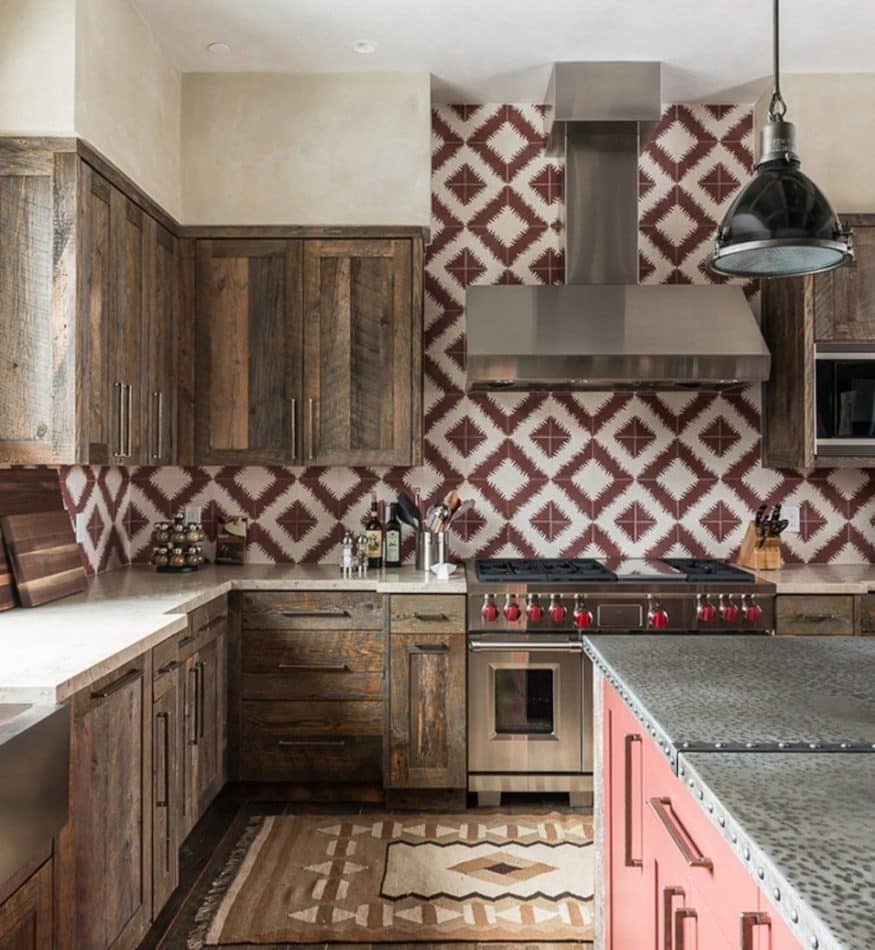 Nestled within a ski chalet in the mountains of Big Sky, Montana, this kitchen exudes classic cabin-home warmth. “The brick red in the tile was a thread in the main level common areas,” says Charlene Petersen, principal of Cashmere Interior. “It was carried through in the home’s Navajo textiles and art.” To complement the palette, Petersen installed reclaimed corral-board cabinets, a hammered-zinc island countertop and a Ralph Lauren pendant, all of which provide perfect rustic-industrial appeal. Photo by Audrey Hall 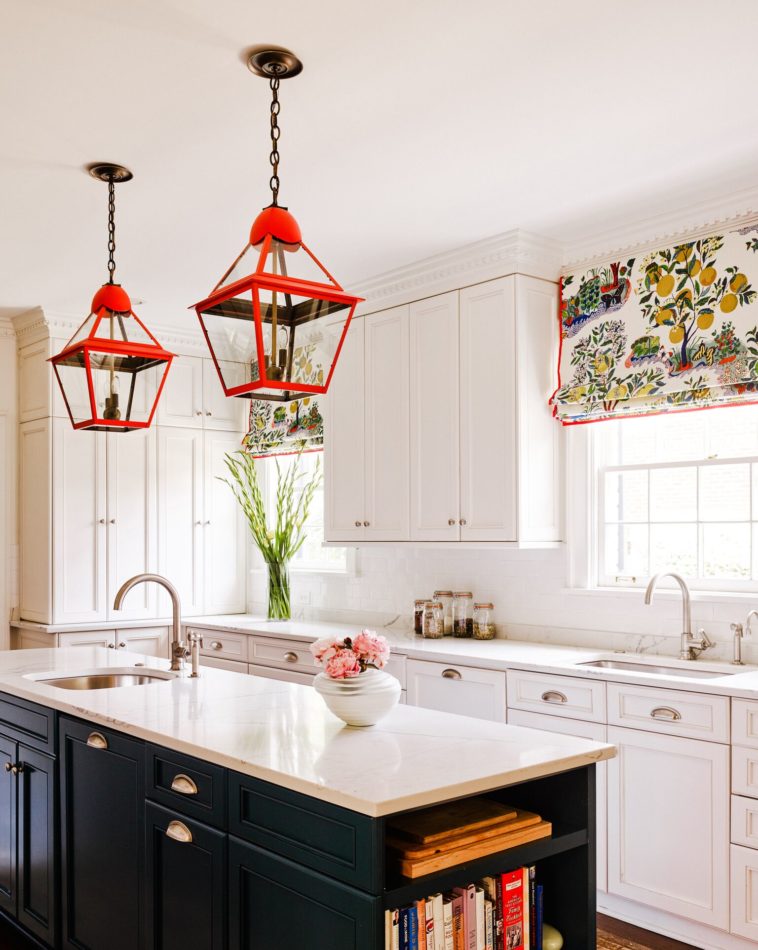 At a young family’s home in North Carolina, Charlotte Lucas prioritized function and color in every room, opting for a palette of poppy red, mellow greens and crisp blues that extends into the bright and airy kitchen. To enliven the mostly white space, Lucas painted the island’s cabinets a deep blue and brought in custom-tinted pendants and roman shades in a charming Schumacher fabric. “The color of the island adds dimension to the room, while the red accents compliment the cheerful hues throughout the home,” Lucas says. Photo by Chris Edwards 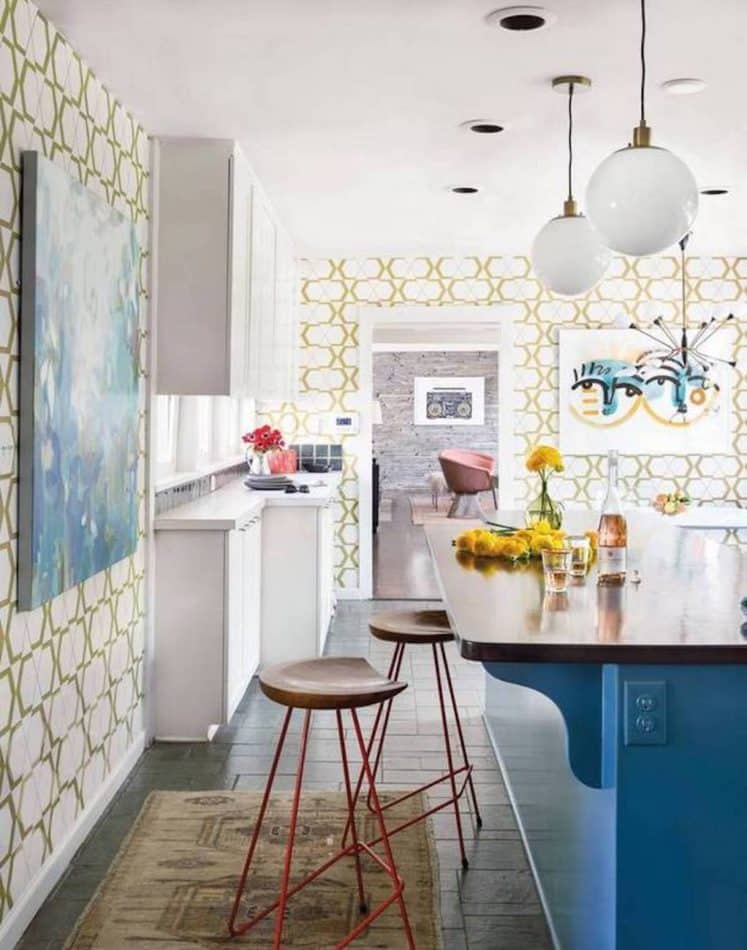 “I wanted to add distinction to the kitchen without doing a huge renovation,” notes Lucas of this whimsical open-concept space in her own home. “Painting the island and using a colorful geometric wallpaper were necessary for adding interest to the space and keeping the mid-century vibe of the house.” Lucas also installed mid-century-modern globe pendants and a sputnik chandelier to “fit with the architecture of the home,” she explains. Photo by Matthew Williams 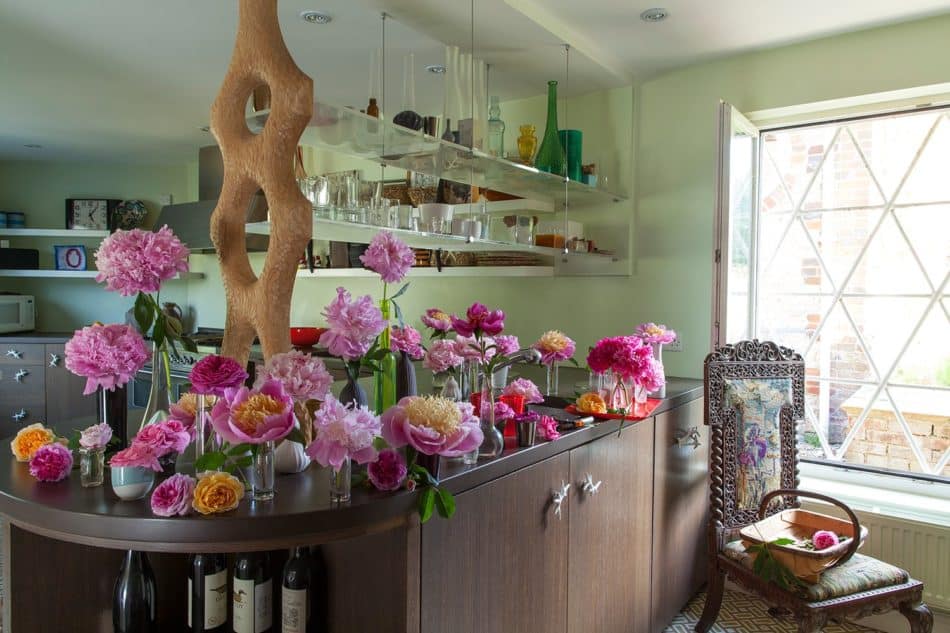 “This is the flower-arranging end of my kitchen in Oxfordshire,” says English designer Ashley Hicks, who appreciates a potent dose of whimsy and color in his interiors. “The walls are a sort of pale arsenic green inspired by my grandmother’s 1950s-decorated house in Ireland,” he says of the soothing backdrop, which is offset by the brown-tinted concrete countertop and dark oak cabinets. A protruding carved-oak sculpture supports the acrylic shelves filled with glass vases. Photo by Ashley Hicks 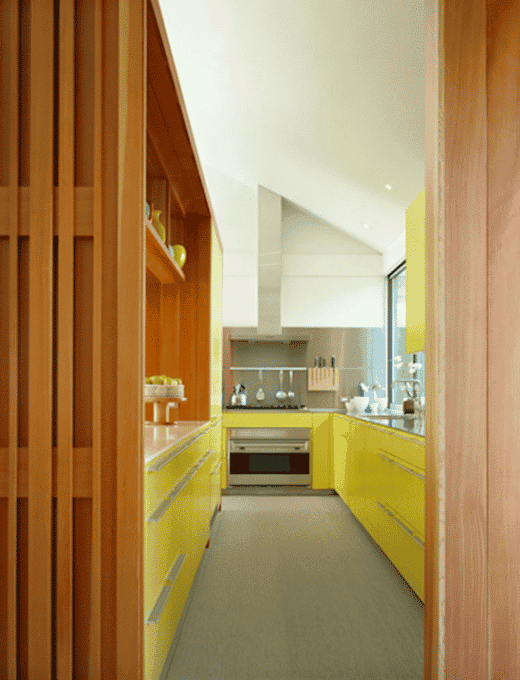 Outfitted with matte lacquer cabinets in a custom yellow, this bright galley kitchen was part of a Hamptons home renovation by Pepe Lopez in collaboration with Peter Brotherton Architects. “The family loved color and was determined not to have a plain, neutral kitchen,” Lopez says. For a warm balance, he also incorporated Douglas fir. “This gave the kitchen a more custom feel, softened the impact off the cabinets and gave the kitchen a beachy vibe,” he adds. Photo by Catherine Tighe 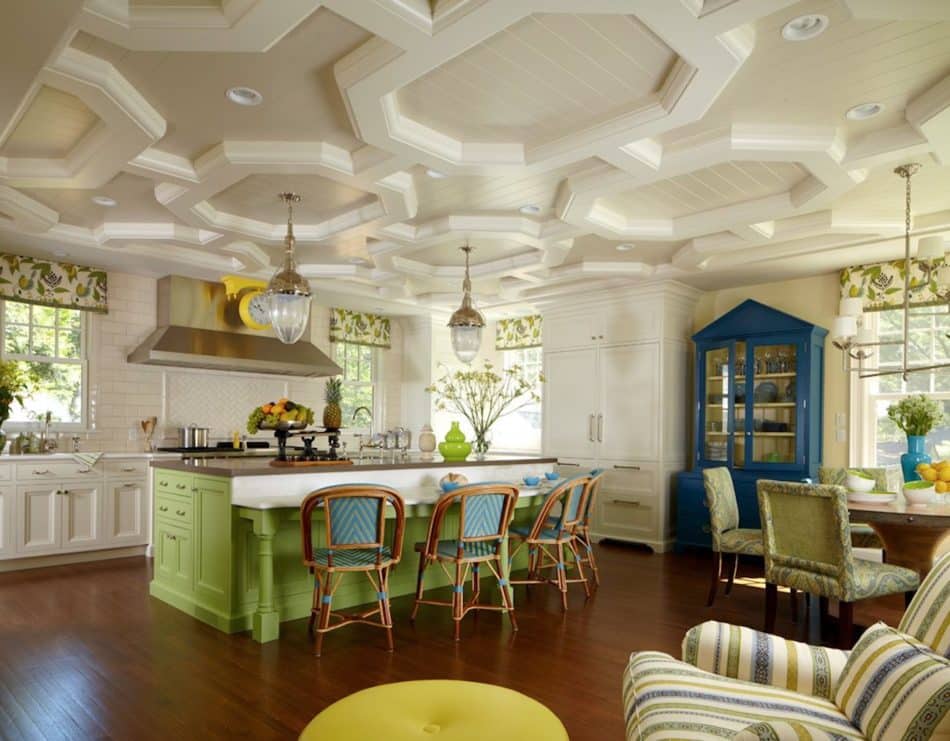 In expanding a turn-of-the-century family house in New Jersey, design firm White Webb took to transforming the existing small kitchen into a grand gathering spot. “The kitchen is the heart of the house, and that’s what we set about creating here,” Frank Webb says of the renovated space. “To create architectural interest, we designed the coffered ceiling, and we selected a mix of sunny, nature-inspired hues to enliven the upholstery and highlight the island and custom hutch.” Photo by Phillip Ennis 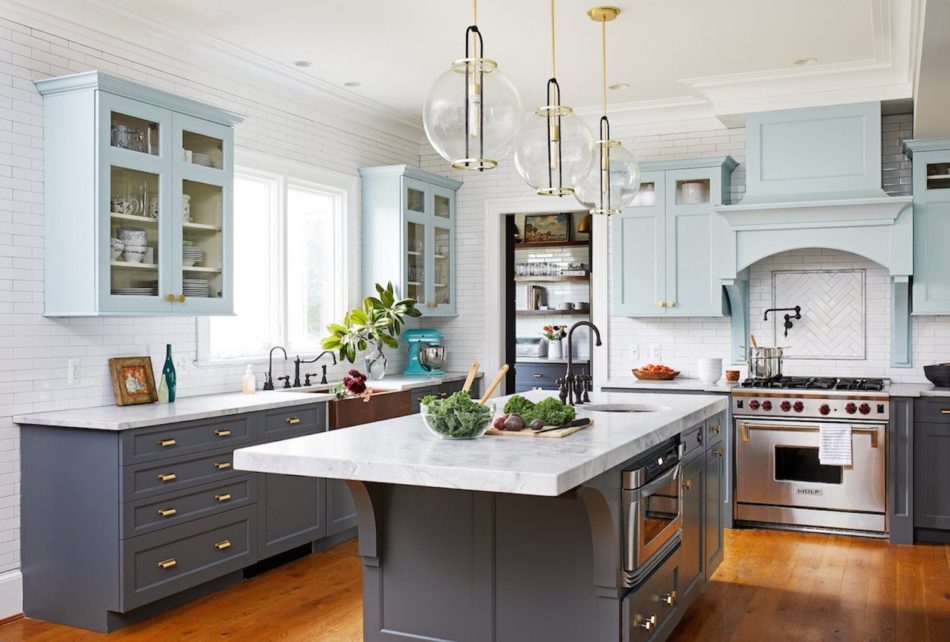 “She has a bold, whimsical aesthetic, whereas his main concern was creating something user-friendly,” says designer Zoe Feldman of couple who owns this kitchen in Virginia. To balance style and function, Feldman opened up the cooking area, adding a butler’s pantry and mudroom (for “more prep and storage space”), while maintaining a light and luxe look by painting the cabinets in two tones (for “a sense of levity”) and mixing metals (for “an effortless, unexpected touch.”) The pendants are from Rejuvenation. Photo by Stacy Zarin Goldberg 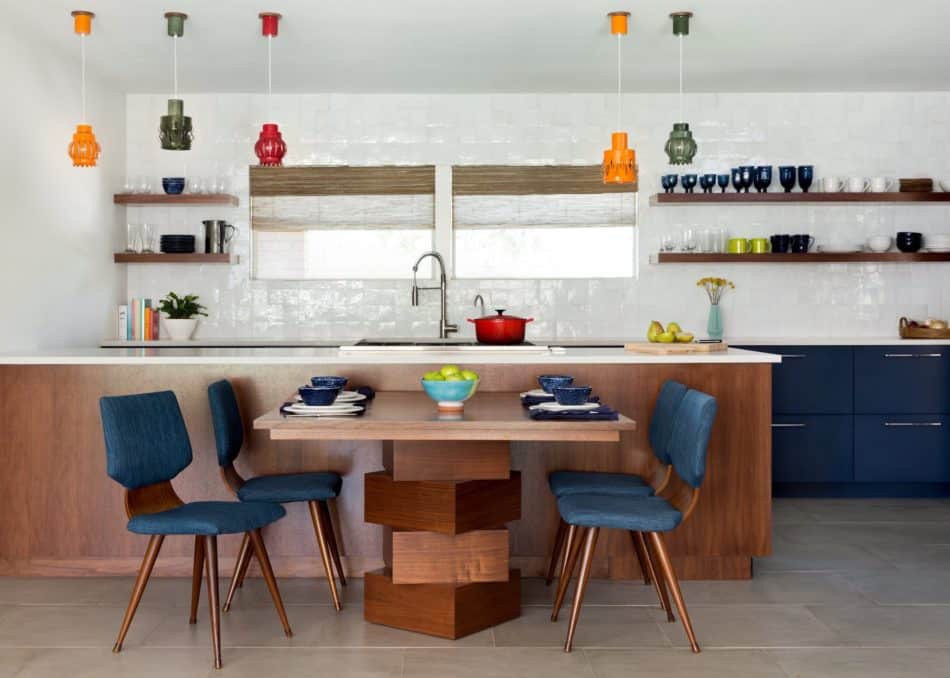 Leslie Phillips-Greco’s primary focus for this family kitchen was to introduce color and furnishings that would balance out the walnut millwork that is prevalent in the home. “Our client is quirky and more traditional than her 1952 mid-century house,” says Phillips-Greco, who chose distinctive pieces, such as a sculptural table along with chairs and pendants found on 1stdibs. “We wanted a look that’s traditional yet modern and works with the bones of the home,” she adds. Photo by Molly Culver 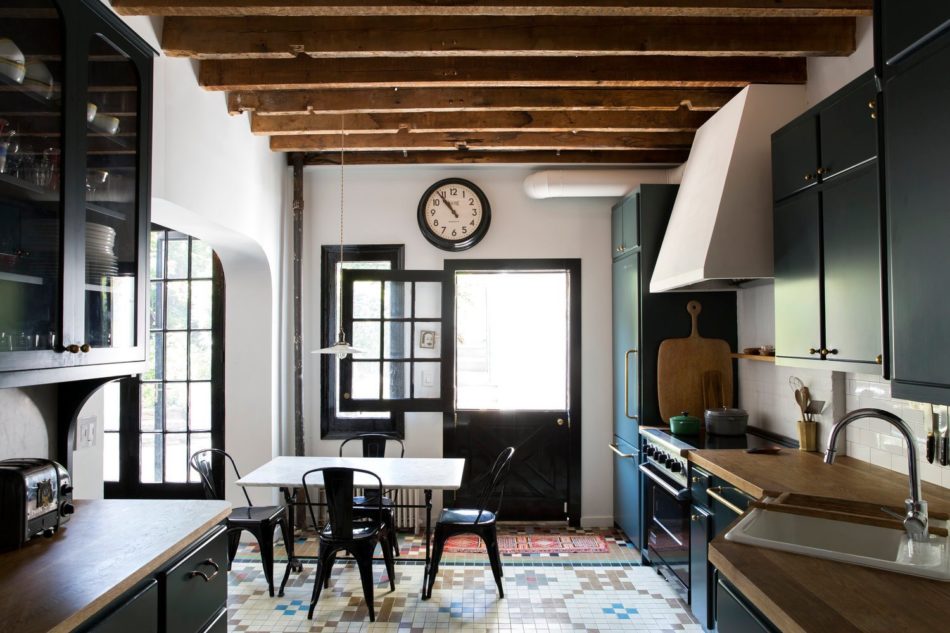 Bold contrast and charm underscore this Manhattan kitchen by the firm Frances Mildred. The plaster walls and exposed beams are offset by dark-green cabinets, black trims and floor tiles in a pattern inspired by Moroccan rugs. “We wanted to bring a little whimsy inside to create a space that is both surprising and classic,” says Lauren MacCuaig, cofounder of the firm. “The floor was meant to feel like a classic bistro, but modern and a little funky,” adds partner Brian Papa. Photo by Emma Tucci 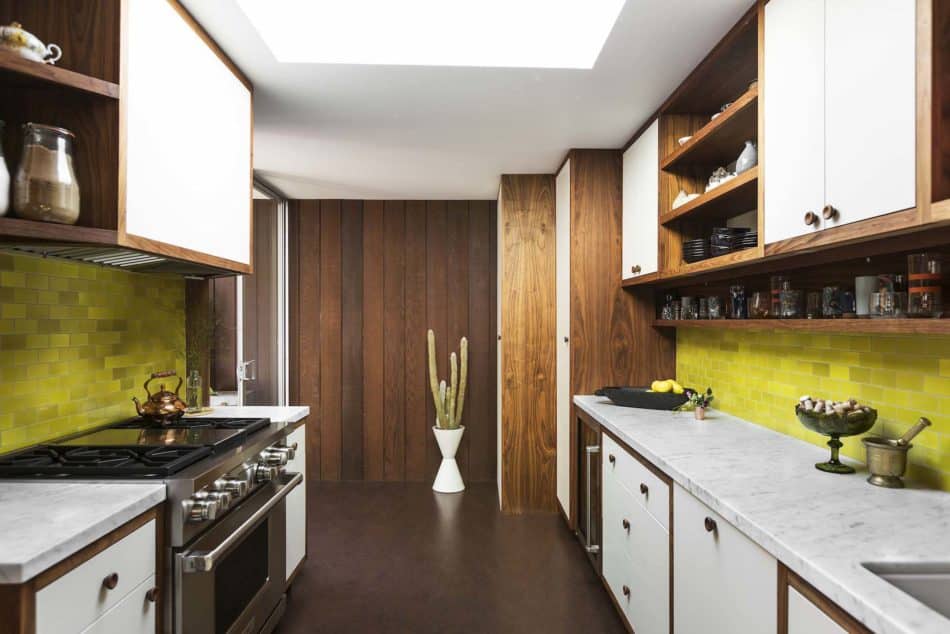 The yellow-tile backsplash “is what gives the space its personality,” says Frances Merrill, founder of Reath Design, of this renovated galley kitchen in a 1963 Hollywood Hills home. “It’s a mid-century palette that is bold without being dated,” she says of the vibrant backdrop, used to offset the house’s original wood panel walls. “We wanted to design a kitchen that would evolve and improve with time while keeping pace with the rest of the house.” Photo by Laure Joliet 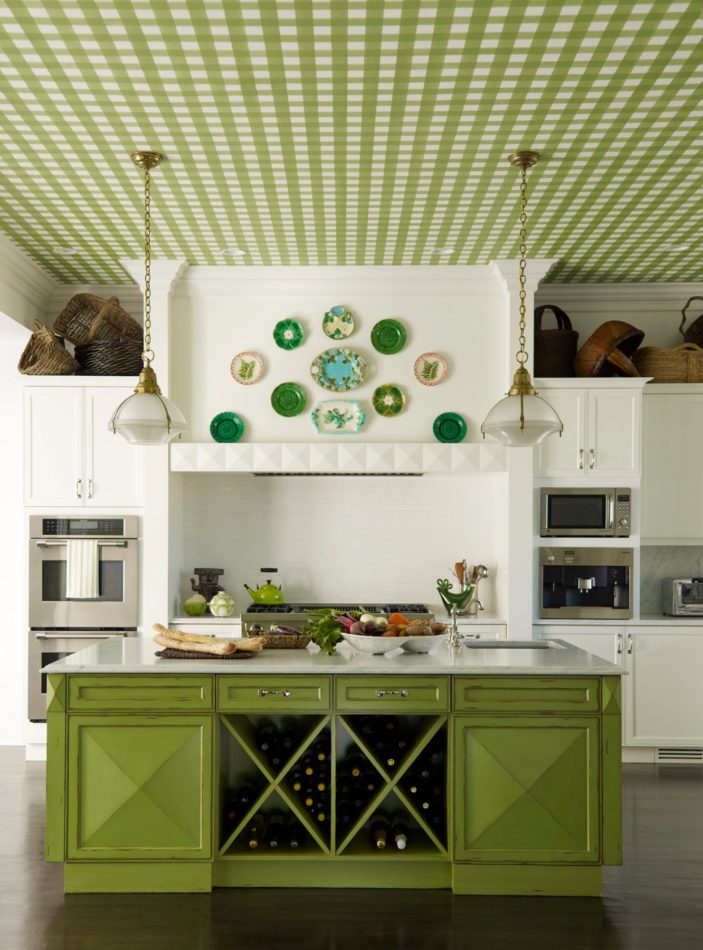 For a traditional kitchen in a New York country house, Gideon Mendelson wanted to break out of the classic white template. “This candy-apple green is a fun but timeless color, and it has just enough acidity in it that gives it some real punch and personality,” Mendelson says. He also covered the high ceiling in a gingham of the same hue to make it appear lower, then adding to the effect by hanging two vintage pendants from Ann Morris. Photo by Eric Piasecki 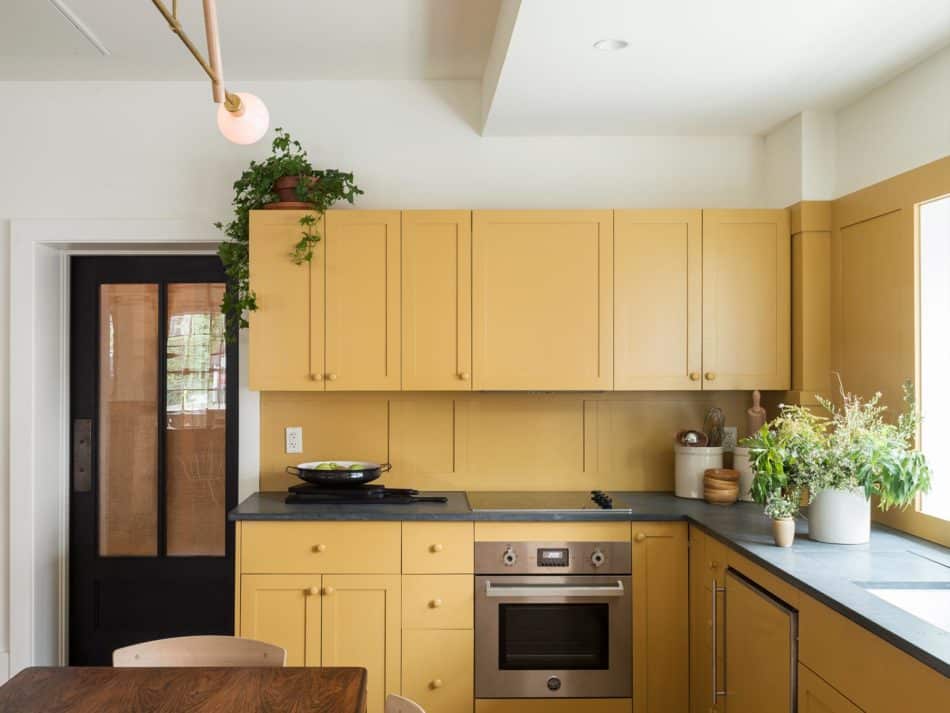 In renovating the Rivertown Lodge in Hudson, New York, Brooklyn firm Workstead created this lobby kitchen as a streamlined riff on Early American forms. “We designed the cabinetry, backsplash and wall returns to all incorporate a plain, Shaker language,” says cofounder Robert Highsmith, who worked with a local builder who specializes in historic restoration. In the same vein, the palette of warm mustards, deep reds and crisp whites is, he says, “such that you might find in Shaker villages.” Nevertheless, his custom pendant light is thoroughly contemporary. Photo by Matthew Williams