H 79 in. W 47 in. D 22 in.
Eclectic Closet, circa 1880-1890
Located in Opole, PL
The closet is two-door, with an advanced cornice with two drawers. The upper section ends with a simple crest. The crest is decorated with a stripe with an ornament, and a profiled ...
Category

H 72.45 in. W 125.99 in. D 18.12 in.
Oak Wardrobe Linen Blanket Closet with Slated Doors
Located in Miami, FL
A large 2 piece wardrobe with doors with slatted design. 8 doors total. The bottom portion has 4 doors that reveal shelving. The top part accommodate shelving as well as rods for han...
Category

H 91 in. W 78.25 in. D 20 in.
Art Nouveau Closet from the Early 20th Century
Located in Opole, PL
We present you a closet, circa 1900-1910, made of mahogany wood. This piece of furniture is in the form of an openwork wall with an advanced base for umbrellas and a storage compart...
Category 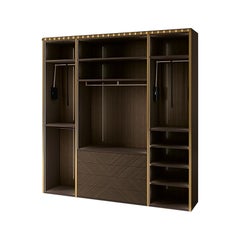 H 311 in. W 320 in. D 63 in.
19th Century from Vienna Neoclassic Wardrobe Closet in Massive Oak Wax Polished
Located in Vigonza, Padua
Robust neoclassical wardrobe From Vienna, mid-19th century, with a gendarme's hat, in solid oakwood, restored and waxed. We can add internal shelves to use it as a wanderful bookcase...
Category

H 70.87 in. W 50.01 in. D 21.26 in.
Custom Metal Armoire or Closet Doors
Located in Great Barrington, MA
Make it the size you need. Add interest and character to your next new building or renovation project. These neoclassical style doors are made of steel. Other finishes available. T...
Category

H 80 in. W 21 in. D .1 in.
Remarkable French Walnut 19th Century Armoire, That Is a Clothes Closet
Located in West Palm Beach, FL
We removed the existing closet in the hallway and placed this beautiful armoire in its place as our closet. Early 19th century gorgeous highly carved dark lustrous walnut French Loui...
Category

H 86 in. W 74 in. D 20.5 in.
Art Deco Mahogany Compactom Armoire Wardrobe, Fitted Closet
Located in Vancouver, BC
Scotland, 1930. All original with fitted interior Left hand side has a hanging section for 12 wooden hangars with a &quot;Dress vest&quot; drawer above and two hanging holders. ...
Category

H 65 in. W 50 in. D 20 in.
Signed Walnut Closet, circa 1900
Located in Opole, PL
We present you a walnut piece of furniture, circa 1900, with a signature of Bick. Wright & Co. This closet is in the form of an openwork wall with mirror, which is topped with a gal...
Category

H 83.08 in. W 42.52 in. D 15.56 in.
1930s Mahogany All Fitted Closet, Compactom Steamer Trunk
Located in Saint-Ouen, FR
This closet is perfectly fitted inside. On the left hand side, it has got an articulated hanging section for 12 hangers and on the right hand side it has got a series of four glazed ...
Category

H 68.9 in. W 50.4 in. D 21.66 in.
Wardrobe or Closet, Walnut, Metal, 19th Century
Located in Madrid, ES
Double door wardrobe with key lock and drawer with two handles in the lower part made of walnut wood and decorated with clear classicist influences (plant elements and architectural ...
Category

H 91.74 in. W 62.21 in. D 24.81 in.
Closet-Linen Cabinet from the Interwar Period with a Mirror
Located in Opole, PL
We present you a single-leaf oak closet from the Interwar period. The inside of this piece of furniture is divided by shelves and a drawer at the basis. Furthermore, the shelves ar...
Category

Closet-Linen Cabinet from the Interwar Period with a Mirror

H 67.13 in. W 55.91 in. D 22.25 in.
B345 Three-Door Victorian Satinwood Breakfront Armoire, Wardrobe, Closet
Located in Vancouver, BC
Scotland, 1860. All original finish. Fitted interior. Centre door enclosed with four original slides above and four graduating drawers below. The tow end sections have all origi...
Category

H 79 in. W 76 in. D 24 in.
Oak Closet, circa 1920
Located in Opole, PL
We present you a prewar oak piece of furniture in the “Country French” style. This closet is in very good condition and has not undergone renovation.
Category

Oak Closet from the 19th Century

H 85.5 in. W 42.75 in. D 18 in.
Contemporary Valentina Giovando Closet Wood Fabric Metal Bronze Gold Aqua Pink
By Valentina Giovando
Located in Milano, IT
NASCONDIMI "Nascondimi" is an exquisitely refined secret closet from "Parlami d'Amore" Valentina Giovando's collection. A true piece of art suitable for any room if you want an ecle...
Category

H 67 in. W 67 in. D 16 in.
Get Updated with New Arrivals
Save "Armoire Closet", and we’ll notify you when there are new listings in this category.

Armoire Closet For Sale on 1stDibs

At 1stDibs, there are many versions of the ideal armoire closet for your home. A armoire closet — often made from wood, oak and walnut — can elevate any home. Find 47 options for an antique or vintage armoire closet now, or shop our selection of 2 modern versions for a more contemporary example of this long-cherished piece. Whether you’re looking for an older or newer armoire closet, there are earlier versions available from the 18th Century and newer variations made as recently as the 21st Century. Each armoire closet bearing Art Deco, Victorian or Neoclassical hallmarks is very popular. Many designers have produced at least one well-made armoire closet over the years, but those crafted by Compactom, A. Mikael Laursen and Guillerme et Chambron are often thought to be among the most beautiful.

How Much is a Armoire Closet?

Finding the Right Wardrobes and Armoires for You

When shopping for antique and vintage wardrobes and armoires for your home, there are several things to keep in mind, not least of which is question number 1: What is the difference between an armoire and a wardrobe?

The difference between an armoire and a wardrobe is actually simple: An armoire is merely an ornate wardrobe. A wardrobe is a tall, streamlined storage cabinet that usually has some combination of drawers, shelves and hanging rods. Antique and vintage armoires, on the other hand, are freestanding, heavy wooden structures that typically feature decorative metal hinges and pictorial carvings. Armoires are large cabinets that aren’t outfitted with the varied storage features that wardrobes now commonly have. Armoires often have one or two doors and a hanging bar and allow for quick access. Whether a minimalist mid-century modern wardrobe or grandiose Victorian-era armoire is the right fit for you, both are highly functional furnishings and can be a smart storage solution.

Armoires have been around since medieval times, and initially they may have housed weapons and armor. In their early days, armoires were often adorned with elaborate carvings and lavish paintings, particularly in Renaissance-era France. During the 18th century and later, armoires were widely known as “presses” for hanging clothes, and they were so large that they swallowed up the room where they stood. In today’s modern homes, an antique armoire can be a striking, architectural work of art amid comparably unadorned furnishings. Whether you’re using your piece in the kitchen for cookware or as a food pantry, in the bedroom for clothes or in the living room as a media console, it will likely become a lovable focal point.

The evolution of the armoire can be seen in today’s corner wardrobes, which may rest on an asymmetrical base to account for corner placement, and even mirrored wardrobes, which feature a mirror affixed to the inside panel of one of the doors for convenience. Contemporary wardrobes commonly feature additional sliding trays and drawers and hanging space for clothing or linens, and the cabinet doors make them ideal for concealing televisions and computer monitors when such devices aren’t in use.

When choosing the right wardrobe or vintage armoire for your home, it’s good to have the following in mind: What are you planning to store in it? How much of what you’re storing will need to be housed in it? It should be big enough to accommodate your needs. What is the size of the room where your wardrobe or armoire will live? A large new piece of furniture in a modest space can easily become a hindrance if you have to navigate your way around it during your daily routine, so be mindful of the area you'll need in order to move freely.

Whether you are looking for an antique walnut armoire or a simple contemporary wardrobe, find the right piece for your home today on 1stDibs.