H 36 in. W 72 in. D 20 in.
Lighted Chrome & Glass Shelving Etagere Modern Storage Unit W Doors
Located in Keego Harbor, MI
Steel and glass combine to make this contemporary etagere both beautiful and functional. Set atop a platform base, the four glass shelves comprise the interior which is framed with a...
Category

H 79 in. W 37 in. D 16.5 in.
Camilla Wooden Storage Unit
By Covi e Puccioni
Located in Milan, IT
This media storage unit with a wooden structure will add a touch of class to any home or office space. The structure of the piece is in a burnished brass color while three glass door...
Category 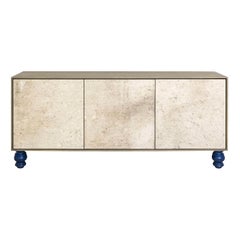 H 37.8 in. W 70.87 in. D 19.69 in.
Tango Round Storage Unit by Bartoli Design
By Laura Meroni
Located in Milan, IT
Storing away items becomes creative as well as beautiful with this creative cylindrical, wooden storage unit that opens up in the front. This piece, which is available in three diffe...
Category

H 78.75 in. W 21.66 in. D 17.72 in.
Midcentury Eames Contract Storage 'ECS' Unit
By Charles Eames, Herman Miller, Charles and Ray Eames
Located in BROOKLYN, NY
For your consideration this is extremely rare Eames wall unit produced in 1961. The ECS are seldom found and only produce for a short period of time. Featuring three sections that i...
Category

H 19.1 in. W 23.63 in. D 11.82 in.
Box Inbox BIB03 Storage Unit in Green Glass by Philippe Starck from Glass Italia
By Glas Italia, Philippe Starck
Located in Macherio, IT
A series of low tables and closed and open storage furniture, designed like a box within a box, in laminated 5+5 mm thermo-welded extra light glass. These are placed on a base of ref...
Category

H 24.41 in. W 70.87 in. D 17.72 in.
Transfix Storage Unit in Glass, by Marc Krusin, Kensaku Oshiro from Glas Italia
By Glas Italia, Marc Krusin, Kensaku Oshiro
Located in Macherio, IT
Transfix storage unit is shown here in the transparent extralight glass. Display and storage unit and element dividing and screening the spaces, obtained by gluing slabs of laminated...
Category

H 116.15 in. W 63 in. D 17.72 in.
Milo Baughman For Thayer Coggin Cabinet And Shelf Units
By Thayer Coggin, Milo Baughman
Located in Pasadena, TX
A set of mid century modern furniture designed by Milo Baughman, made by Thayer Coggin: A cabinet in rosewood with two ebonized shelves and two shelf or display units with chrome re...
Category

H 42 in. W 32 in. D 13 in.
Boxinbox BIB01 Storage Unit, by Philippe Starck from Glas Italia
By Glas Italia, Philippe Starck
Located in Macherio, IT
A series of low tables and closed and open storage furniture, designed like a box within a box, in laminated 5+5 mm thermo-welded extralight glass. These are placed on a base of refl...
Category

H 35.44 in. W 33.47 in. D 14.38 in.
Boxinbox BIB02 Storage Unit, by Philippe Starck from Glas Italia
By Philippe Starck, Glas Italia
Located in Macherio, IT
A series of low tables and closed and open storage furniture, designed like a box within a box, in laminated 5+5 mm thermo-welded extralight glass. These are placed on a base of refl...
Category

H 65.36 in. W 15.75 in. D 14.38 in.
Gradient Color Glass Display Unit by Studio Buzao
By Buzao
Located in Beverly Hills, CA
Halo is the curved converted frequency of light. Just like the illusory sun, it flickers far beyond reach yet directly arrives before eyes right away. Halo is the color arc gradua...
Category

H 71 in. W 16.7 in. D 15.8 in.
Gradient Color Glass Display Unit by Studio Buzao
By Buzao
Located in Beverly Hills, CA
Halo is the curved converted frequency of light. Just like the illusory sun, it flickers far beyond reach yet directly arrives before eyes right away. Halo is the color arc gradua...
Category

H 50 in. W 58 in. D 18 in.
Oyster Wall Unit
By Tura
Located in Milan, IT
This Art Deco-inspired wall unit is finished entirely with natural parchment (col. 002) and rosewood (col 074) both with a high gloss finish. This imposing piece of the Oyster Collec...
Category

H 94.49 in. W 122.05 in. D 23.63 in.
Stunning Midcentury Chrome and Glass Shelving Unit
Located in Brooklyn, NY
This beautiful chrome and glass shelving unit features a bold design and loads of functionality. Eye-catching in any room you place this unit it will be sure to turn heads for years ...
Category

H 78 in. W 70.5 in. D 14 in.
Chrome And Glass Modernist Etagere Shelf Unit
Located in Pasadena, TX
A mid century modern chrome and glass shelf unit that could be used as an etagere.
Category

H 84.25 in. W 79 in. D 20 in.
Pair of Polished Chrome & Glass Shelving Unit, 1970s
Located in Lisboa, 11
This pair of shelves was produced in Portugal during the 1970's. They have a simple yet functional design which is perfect for displaying books and your favorite object. Each of the ...
Category

H 71.26 in. W 30.32 in. D 16.54 in.
Stainless Steel Pace Wall Unit with Lacquered Burl Wood Cabinets
By Pace Collection
Located in Ferndale, MI
There are two cabinets with this system .
Category

H 99 in. W 116 in. D 14 in.
Large Tiffany Wall Unit
Located in Milan, IT
Combining elegance with functionality, this superb wall unit will add dimension and style to a sophisticated, modern interior. Constructed with an open chrome-finished metal frame, t...
Category

H 86.62 in. W 124.02 in. D 35.04 in.
Walnut Wood & Matt Grey Glass Entertainment Center Media Unit with TV Pillar
By Team 7
Located in Chicago, IL
Entertainment center made of walnut and beech wood with matt anthracite glass top and sides. The finished back allows you to place against a wall or floated in the middle of the room...
Category

H 82.68 in. W 74.81 in. D 18.9 in.
Morari French Display Shelf Unit in Chrome and Glass
Located in Waalwijk, NL
Morari, free-standing display unit, chrome and glass, France, 1960s A functional and aesthetically pleasing shelving unit. This is discernible in the playful composition of differen...
Category

H 39.77 in. W 45.67 in. D 14.18 in.
Baughman Style Brushed Steel & Smoked Glass Etagere Shelving Unit
By Milo Baughman
Located in Keego Harbor, MI
From Le Shoppe Too in Michigan comes this Mid-Century Modern with five shelves in smoked grey glass. Polished chrome framing brings this unit together in a functional, yet beautiful ...
Category

H 78.75 in. W 78.75 in. D 13.39 in.
Pair of Triangular Brass and Glass 1970's Shelving Units
Located in London, GB
Pair of 1970s Hollywood Regency style of triangular shelving units in brass with tinted glass shelves for display of decorative objects. are very versatile in placing.
Category

H 66 in. W 25 in. D 10.5 in.
Stunning Art Nouveau Brass and Glass Staggered Shelving Unit-French
Located in Copenhagen K, DK
Handsome and stylish old French Étagère formed with a beautiful brass frame, dating from around 1900, and made in classic Art Nouveau style. This is noticable with the small charming...
Category

H 43.31 in. W 51.19 in. D 34.65 in.
Rare Adrian Pearsall Brutalist Three-Piece Wall Unit Bar Stereo Cabinet Speakers
By Adrian Pearsall
Located in Pemberton, NJ
Extremely rare Adrian Pearsall three-piece wall unit bar with built in speakers. This is probably the only one of these wall units ever produced and was custom-made for the customer....
Category

H 86.5 in. W 78 in. D 30 in.
Lucite, Brass and Glass Shelves Unit, French Work, Circa 1970
Located in Marcq-en-Baroeul, FR
This Shelves Unit is made of lucite and brass with smoked glass shelves.This is a French work. Circa 1970
Category

H 71.66 in. W 90.56 in. D 16.54 in.
Vintage Post-Modern Italian Acrylic and Glass Bookcase or Display Unit
Located in Birmingham, AL
A vintage Italian Post-Modern bookcase or glass display unit having a refined sculptural form in the shape of double canoes featuring a minimalist acrylic and aluminum structure supp...
Category

H 84 in. W 36.5 in. D 14.5 in.
Get Updated with New Arrivals
Save "Glass Storage Unit Cabinet", and we’ll notify you when there are new listings in this category.

How Much is a Glass Storage Unit Cabinet?

Prices for a glass storage unit cabinet can differ depending upon size, time period and other attributes — at 1stDibs, they begin at $302 and can go as high as $84,000, while the average can fetch as much as $3,800.

What Exactly Is a Secretary Desk, and What Is It Used For?

The furniture equivalent of a Swiss Army knife, it's the multifunctional piece you didn't know you needed.