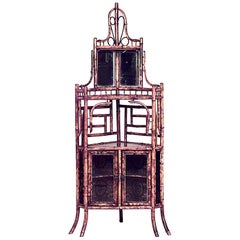 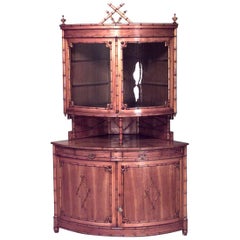 H 53 in. W 18 in. D 12 in.
19th Century English Victorian Tiger Bamboo Lacquer Cabinet with Gilt Wallpaper
Located in Haarlem, NL
Nice little antique Victorian tiger-bamboo cabinet with lacquered top and original gilt relief wallpaper on all three interior shelves, the bottom and the sides. It still has the or...
Category

H 35.83 in. W 21.26 in. D 14.57 in.
English Victorian Bamboo Corner Étagère
Located in Hudson, NY
This lovely small étagère is part of a large type of export furniture made from the sea trade between east and west cultures in the 19th centuries, circa 1870. The structure is of im...
Category

H 17 in. W 16 in. D 26 in.
Restored Tiger Bamboo Four-Tier Shelf with Top Arch
Located in Van Nuys, CA
Late Victorian four-tier tiger bamboo with handwoven rice mat shelves. Restored to new for you. All rattan, bamboo and wicker furniture has been painstakingly refurbished to the ...
Category

H 50 in. W 23 in. D 8 in.
Restored Tiger Bamboo Two-Tier Short Shelf with Bottom Shelf
Located in Van Nuys, CA
Antique tiger bamboo two-tier short shelf with rice mat top. Restored to new for you. All rattan, bamboo and wicker furniture has been painstakingly refurbished to the highest sta...
Category

H 43 in. W 17 in. D 13 in.
Rustic Traditional White Painted Stick and Ball Bamboo Shelf or Side Table
Located in Oklahoma City, OK
A tall rustic stick and ball bamboo bookcase. This piece features four shelves. The legs are created from bamboo and the back has an X stretcher which provides additional stability. ...
Category

H 49 in. W 21 in. D 10 in.
1920s Pine Faux Bamboo Painted Knee Hole Desk
Located in Debenham, Suffolk
1920s pine knee hole desk with faux bamboo decoration. Originally would have been fitted with a mirror to the top, which was later removed. Comprising of 2 parts (writing surfa...
Category

H 48.5 in. W 24 in. D 14 in.
19th Century English Victorian Bamboo Cabinet
Located in Winter Park, FL
A 19th century English bamboo and rosewood Asian style étagère having open shelves with decorative bamboo galleries and two small cabinets. The cabinets are made of rosewood and have...
Category

H 37 in. W 24.5 in. D 11 in.
Victorian Burnt Bamboo Cabinet
Located in West Palm Beach, FL
Cabinet, of burnt bamboo inset with japanned panels; its bevelled mirror surmounted by broken pediment and flanked by shelves, over cupboard base with double doors of glass, raised o...
Category

H 69 in. W 26 in. D 15.5 in.
Victorian Bamboo and Lacquer Cabinet
Located in Port Chester, NY
As charming a piece of bamboo furniture as you will find. All original lacquer plaques. Delightful.
Category

H 67.5 in. W 27 in. D 15 in.
Antique Bamboo Cabinet, Victorian, Oriental, Bedside, Rattan, Glazed, circa 1900
Located in Hele, Devon, GB
This is an antique bamboo cabinet. A Victorian, oriental bedside table with rattan top and glazed door dating to the turn of the 20th century, circa 1900. A quality oriental cabin...
Category

H 48 in. W 30 in. D 20 in.
19th Century Victorian Decoupaged Shell Bamboo Bookcase
Located in Baton Rouge, LA
A fabulous Victorian bamboo bookcase from 19th century England, that has been more recently decoupaged with an assortment of beautiful gold colored shells on its top and sides. This ...
Category

H 48 in. W 29 in. D 14 in.
19th Century Victorian Decoupage Fish Bamboo Chest of Drawers
Located in Baton Rouge, LA
This great little Victorian bamboo four-drawer chest of drawers comes to us from 19th century, England. The antique chest has been more recently decoupaged with a wonderful collectio...
Category

H 58 in. W 28.75 in. D 13.5 in.
Restored Tiger Bamboo Three-Tier Book Shelve
Located in Van Nuys, CA
Antique three-tier tiger bamboo shelve or rack with rice mat top. Restored to new for you. All rattan, bamboo and wicker furniture has been painstakingly refurbished to the highes...
Category

H 31 in. W 24.5 in. L 31 in.
English 19th Century Bamboo Découpage Moth Bookcase
Located in Baton Rouge, LA
A smart English bamboo bookshelf from the 1890s, that has been recently refinished. Where you see black and découpage is where seagrass would have been. Over time, the seagrass has b...
Category

H 32 in. W 51.5 in. D 19.5 in.
Ball and Stick Bamboo and Grasscloth Secretary Desk, circa 1890s
Located in Pasadena, CA
Exuberant and tidy ball and stick style bamboo and grasscloth secretary desk with interior cubbies and bottom shelf, circa 1890s. Minor damages, as shown in photos.
Category

Ball and Stick Bamboo and Grasscloth Secretary Desk, circa 1890s

H 80 in. W 42 in. D 16 in.
English 19th Century Painted Faux Bamboo Chest
Located in Baton Rouge, LA
An excellent five drawer English chest of drawers from the 19th century. The chest is trimmed in a faux bamboo, an element of Asian influence that is sometimes found in antique Engli...
Category

How Much are Victorian Bamboo Cabinets?

Questions About Victorian Bamboo Cabinets
Prices for most victorian bamboo cabinets on 1stdibs are negotiable. You’ll see a "Make an Offer" button on the item details page, indicating that the seller is willing to consider a lower price. It’s not uncommon for customers to get 15–25% off the list price after negotiating. See our tips for negotiating like a pro.
Only experienced, professional sellers who have applied and been thoroughly vetted by our team of experts can sell victorian bamboo cabinets and other quality items on our site. Learn more about becoming a 1stdibs seller.
The 1stdibs Buyer Protection Guarantee provides coverage for qualified purchases in the unlikely event that the item arrives not as described or is damaged. We’ll work with you and the seller to find a resolution, ensuring your satisfaction. View details
We have partnerships with the world's best shipping providers to facilitate seamless and fully-insured delivery from the seller's location directly to you, wherever you are in the world. Our logistics team is comprised of dedicated members who arrange all the details with our partners, servicing and supporting all shipments. Learn more about shipping on 1stdibs.
For your convenience, we offer multiple payment methods, including all major credit cards and PayPal. For many purchases we also offer financing options or wire transfer. Learn more about payment options on 1stdibs.