H 47.5 in. W 36.5 in. D 2 in.
Midcentury French Parisian Scene Oil Painting in Gilt Frame Signed A. Blanchard
By Antoine Blanchard
Located in Dallas, TX
Set in a carved gilt frame, this exquisite oil on canvas painting depicts a typical Parisian scene, the artwork shows a realistic rendering of space with an impressionistic style. Th...
Category

Warm and Inviting Mid-Century Oil Painting on Board

H 20 in. W 12.5 in. D 1 in.
Mid-Century Oil Painting on Board Depicting an Artist's Studio
By Robert Blanchard
Located in Palm Beach, FL
You can see the influence of the French Impressionists in this Mid-Century oil painting on board. These colors are so hot the painting wants to burst into flames. Than there is the p...
Category

Mid-Century Oil Painting on Board Depicting an Artist's Studio 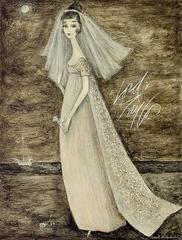 H 11 in. W 8.5 in.
Feminine dancer with flowers on stage illustration for Conde Nast Publications
By Carol Blanchard
Located in Miami, FL
Tapered hands and pointy-toed female figures along with the cropped legs of a stagehand are depicted in a dance performance. Blanchard was a fashion illustrator and worked for many ...
Category

H 21 in. W 26.5 in. D 2 in.
Surrealist Jungle Animals Painting by Haitian Artist
By Smith Blanchard
Located in Houston, TX
Smith Blanchard painting of a whimsical jungle scene that depicts a group of exotic animals gathered around a bright blue river. The oil painting is a beautiful representation of the...
Category

H 38 in. W 32 in. D 3 in.
Midcentury Oil Painting on Board of a Parisian Art Studio
By Robert Blanchard
Located in Palm Beach, FL
Here is a midcentury oil painting on board that typifies the cliched Parisian artist's studio, complete with a skylight view of church steeples on a cloudy day. One of six recently a...
Category

Midcentury Oil Painting on Board of a Parisian Art Studio

H 35.75 in. W 23.75 in. D .75 in.
Impressionist Oil Painting of Paris, France in the Manner of Blanchard & Cortes
Located in Alamo, CA
This colorful Impressionist oil on canvas painting of a Paris street scene in the manner of Antoine Blanchard and Edouard Cortes. The painting in the style of the Le Belle de Epoch p...
Category

Impressionist Oil Painting of Paris, France in the Manner of Blanchard & Cortes, Unknown

Blanchard Oil For Sale on 1stDibs

Find the exact blanchard oil you’re shopping for in the variety available on 1stDibs. You can easily find an example made in the Post-Impressionist style, while we also have 4 Post-Impressionist versions to choose from as well. If you’re looking for a blanchard oil from a specific time period, our collection is diverse and broad-ranging, and you’ll find at least one that dates back to the 20th Century while another version may have been produced as recently as the 21st Century. Adding a blanchard oil to a room that is mostly decorated in warm neutral tones can yield a welcome change — find a piece on 1stDibs that incorporates elements of gray, brown, beige, black and protectString (more). A blanchard oil from Antoine Blanchard, Carol Blanchard, Smith Blanchard and Cecil Crosley Bell — each of whom created distinctive versions of this kind of work — is worth considering. These artworks were handmade with extraordinary care, with artists most often working in oil paint, paint and canvas.

How Much is a Blanchard Oil?

A blanchard oil can differ in price owing to various characteristics — the average selling price for items in our inventory is $7,200, while the lowest priced sells for $753 and the highest can go for as much as $28,000.