From King Tut to Flappers, What’s behind the Look of Art Deco Jewelry 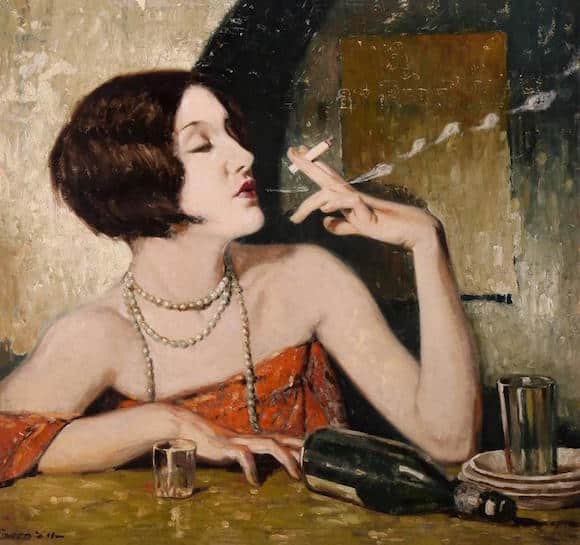 The Roaring Twenties were loud. The decade was defined by advances in technology, economic prosperity, artistic rebellion and of course, the flapper. Sporting a bob haircut, a cylindrical black dress and plenty of jewelry, she held a fan in one hand and a cigarette holder in another, dancing the night away at a jazz club. The party, of course, came to to a screeching halt when the stock market crashed in 1929. Yet the Art Deco period, encompassing the 1920s and ’30s, ushered in a very distinct look in jewelry design. 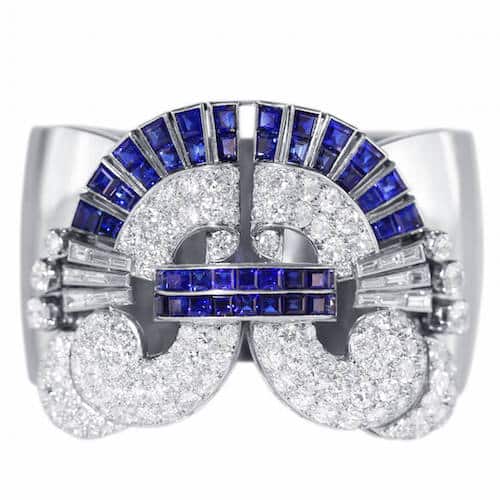 There were many influences on Art Deco jewelry that actually began to take shape about a decade earlier. In 1909, Serge Diaghilev brought the Ballet Russes to Paris, and women went wild for the company’s exotic and vibrant costumes It’s no wonder, then, that jade, lapis, coral, turquoise and other bright gemstones became all the rage. There already existed a fascination with the East, particularly China and Japan, and motifs consisting of fans and masks started to show up in jewelry.

However, the event that had the greatest influence on Deco was the excavation of the tomb of King Tut in 1922. When the world saw what was hidden in Tut’s burial chamber, it sent just about everyone into a frenzy. Pierre Cartier wrote in 1923 that “the discovery of the tomb will bring some sweeping changes in fashion jewelry.” And he couldn’t have been more right. “Egyptomania” left an indelible mark on all of the major jewelry houses, from Cartier to Van Cleef & Arpels, Boucheron and Georges Fouquet. 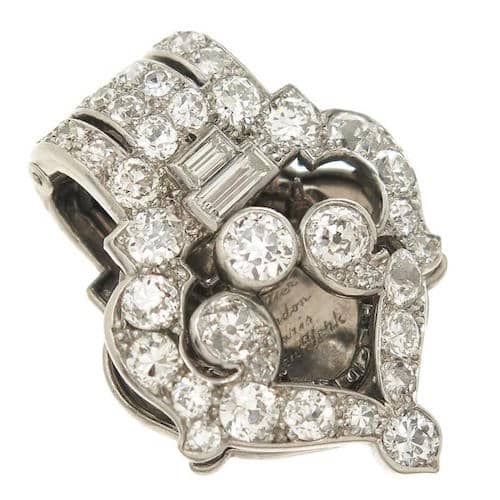 Art Deco jewelry is by and large “white jewelry.” White metals, primarily platinum, were favored over yellow gold. Platinum was first used in jewelry at the end of the 19th century, and with the advancement in technology that allowed platinum to be easily worked, it remained popular through the Edwardian period. However, it became fashionable again with the discovery of the world’s largest platinum deposit in the Merensky Reef in northeast South Africa in 1924. Platinum, which could be manipulated to create fine and durable settings that, unlike silver, did not tarnish.

Around this time, the technology for diamond cutting also improved, so jewelers were able to achieve various geometric cuts. This was an opportune moment to create beautiful jewelry that was inspired by Cubism, Futurism and the Machine Aesthetic. Art Deco is known for its clean lines, and simple shapes were juxtaposed to create beautiful compositions. Pavé settings also became popular during this time. (The term refers to diamonds that are set so closely together that they create an illusion of a “paved” surface where the setting becomes invisible.) 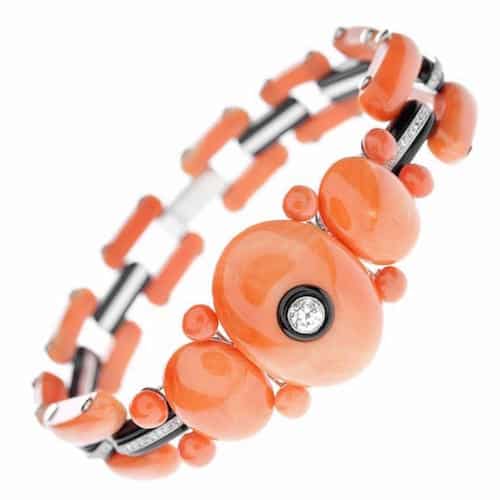 While a lot of jewelry from this period was black and white — the black coming from the use of onyx or black enamel and the white from rock crystal and diamonds — there is plenty color in Art Deco jewelry. A perfect accent to diamonds in platinum settings were blue sapphires, emeralds and rubies, and these stones were also used in combination with each other.

Many designers employed coral, jade and lapis lazuli, too. In fact, some of the most important avant-garde jewelers of the period, like Jean Després and Jean Fouquet (son of Georges Fouquet), would combine white gold with ebony and malachite for a jolt of color. 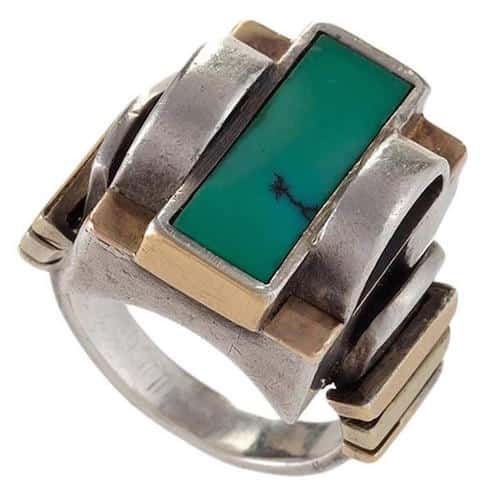 Designers also incorporated machine parts, such as ball bearings, into their designs. For them, jewelry was more than adornment; it was part of the art world. In his 1931 book, Jewelry and Gold, Fouquet fils wrote that “jewelry and gold pieces must be works of art while also responding to the same needs as industrial objects.” (Philip Johnson’s 1934 exhibition, called “Machine Art,” at the Museum of Modern Art, featured ball bearings).

Fouquet was well known in the world of jewelry, and many of his designs were inspired by African art, another major influence on the Art Deco period. 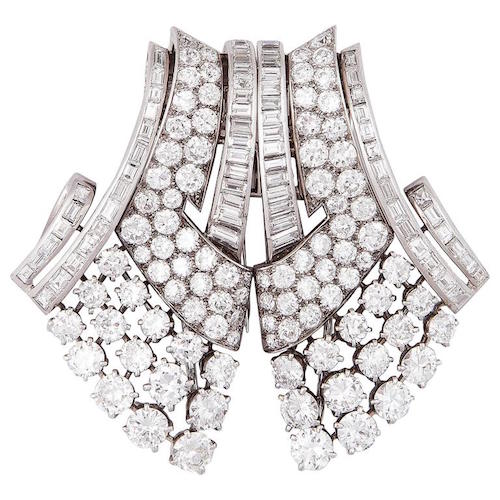 A lot of the jewelry produced during this time nodded to current fashion trends, and women often accessorized their accessories. The cloche hat was often accented with geometric diamond brooches or double-clip brooches. Backless evening dresses looked fabulous with sautoir necklaces, and long pearl necklaces that ended with tassels, popular during the Edwardian period, were favored by women everywhere, including Coco Chanel.

Mademoiselle Chanel can also be thanked for popularizing of long earrings. The French fashion designer favored the masculine look, referred to as la garçonne, and made boyish haircuts a fad. What better way to show off long earrings than with short hair? 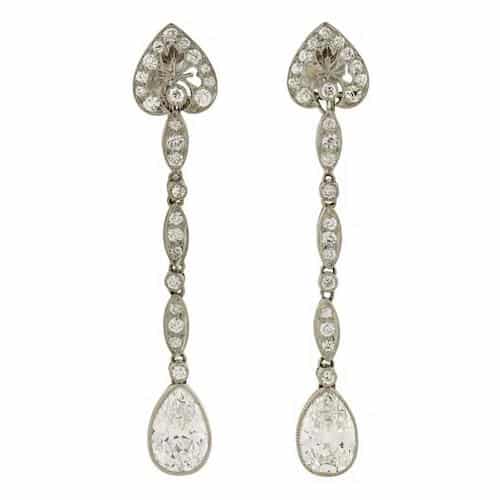 Dresses with short sleeves required bangles and flexible diamond-lined bracelets, and while some women opted for single-strand diamonds on platinum, the most emblematic bracelets of the period are the heavy, wide types with a multitude of diamond cuts that created intricate patterns.

In addition to bracelets, women wore watches of all kinds, from wristwatches to long-chained pendant watches to lapel watches. The clock became a popular objet d’art, with some of the most astounding creations being made by Cartier. 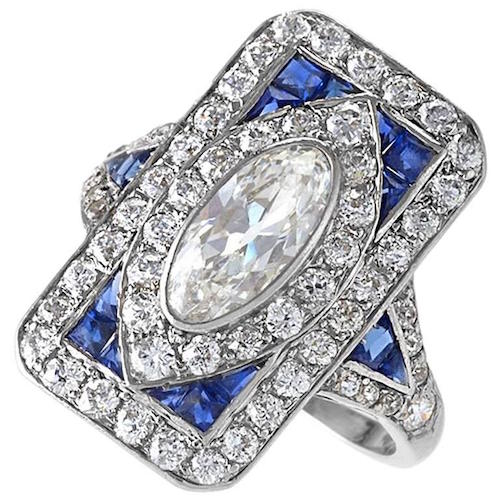 Finally, with the wrists, necks and ears covered, the only spot that needed to be dressed up were the fingers. Prohibition didn’t really stop anyone from drinking in the 1920s, and whether they were entertaining at home or drinking in a speakeasy, women went gaga for cocktail rings. In addition, cigarette holders, cigarette cases (even cigarette lighters with watches) and minaudières — those small jewel-like evening bags — all served as canvases for jewelers. 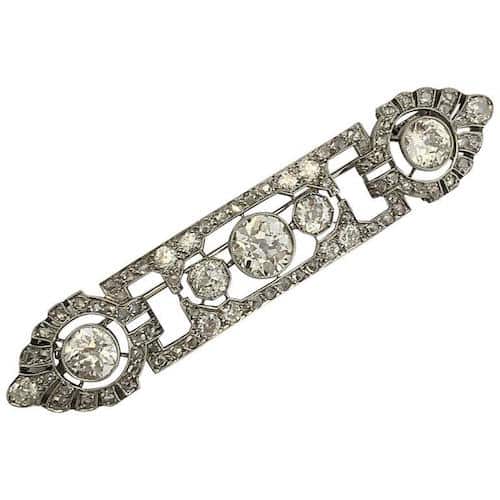 As for the names to know, there were two categories of jewelers during the Deco period: the bijoutiers-artistes and the bijoutiers-joailliers. The former category included jewelers like Després, Gérard Sandoz, Raymond Templier, René Boivin, Suzanne Belperron and Paul Brandt. The Bijoutiers-joailliers encompassed large jewelry houses such as Boucheron, Mauboussin, Tiffany & Co., Cartier, Van Cleef & Arpels and Black, Starr & Frost.

The Art Deco style in jewelry lasted through the 1930s, and it was only in the 1940s that there was a major shift in design. However, the Art Deco style witnessed a revival in the late 1960s, and even today jewelry designers continue to be inspired by the period. Fascination with the Jazz Age is endless.