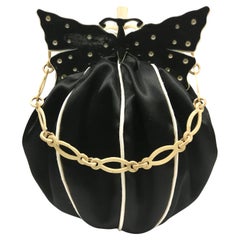 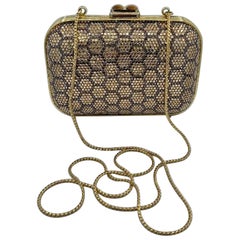 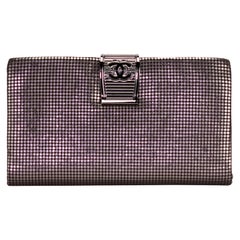 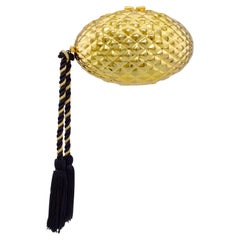 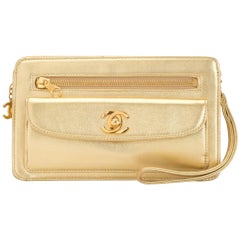 Gucci by Tom Ford Fall 2004 Mink Dragon Clutch Bag
By Tom Ford for Gucci
Located in Prague, CZ
An iconic mini bag with a Swarovski chain handle and a stunning embellishments, made out of genuine mink fur. The bag is in an excellent vintage condition with a faint lipstick stai...
Category

Jimmy Choo Gold Disco Bars Cylinder Cosma Clutch
By Jimmy Choo
Located in London, GB
Jimmy Choo loves all things that sparkle - and for this designer all that glitters is summer gold. This gold tone metal clutch opens with a push down clasp to a satin-lined interior....
Category

Vintage and designer evening bags and minaudières are elegant accessories that can elevate an ensemble and add an air of sophistication.

Evening bags began as coin purses and pouches. They were practical accessories before travel necessitated large cases and handbags eventually emerged and became a fashion statement. Evening bags grew in popularity with both men and women and, by the early 14th century, included details like embroidery and fine materials such as silk. As women began carrying hand fans, calling cards and perfumes, the evening bag became roomier while keeping its compact charm. Some designers added a thin shoulder strap.

Minaudières are ornamental cases designed to hold personal items such as jewelry or cosmetics. A version of a vanity case, the minaudière was pioneered in 1933 by Charles Arpels of Van Cleef & Arpels. Made from metal, it could be engraved, decorated with precious stones or lacquered. The decade saw the popularity of these jewel-like pieces and other evening bags with Hollywood celebrities and others.

Though some of the world’s best-known luxury brands followed suit, minaudières are now made by only a small number of fashion houses such as Judith Leiber, Chanel, Versace and Hermès.

Find a vast array of vintage minaudières and evening bags in a range of designs, colors and styles to complement any outfit on 1stDibs.