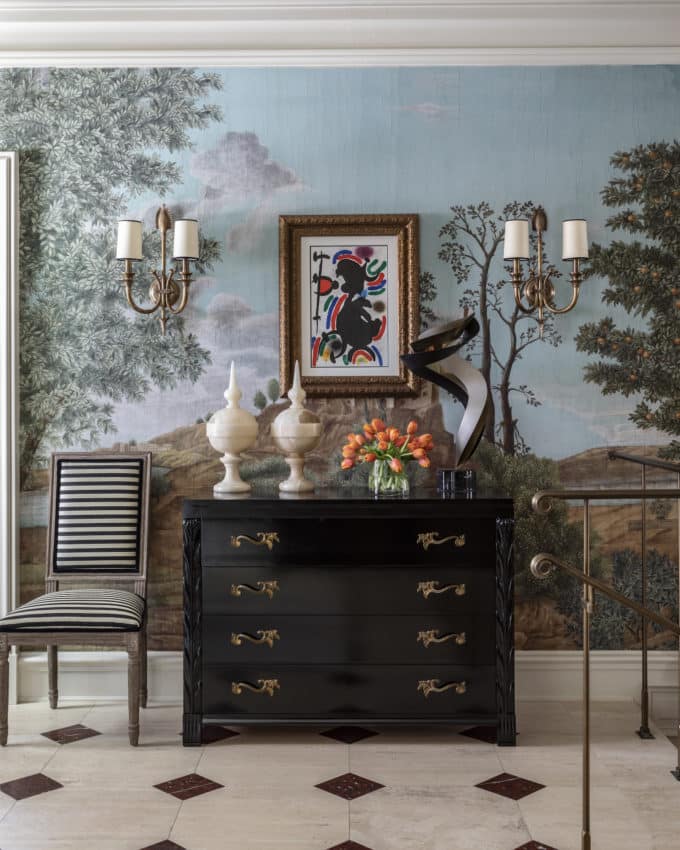 The emergence of a zeitgeist is a mysterious thing. Sometimes, a new monograph or biography is the spark. Other times, it’s a younger generation excavating a bygone phenomenon (like hipsters falling in love with Nina Simone). Often, though, the roots are less scrutable, as is the case with the 46th Annual Kips Bay Decorator Show House. To what can we attribute, for example, a renewed interest in the Viennese Wiener Werkstätte movement, Josef Frank furniture, curvaceous sofas and rosy pink shades?

These characteristics were by no means ubiquitous. In fact, the most salient impression this year is the absolute uniqueness of each designer’s voice — but it was nevertheless interesting to note the way these popped up on the various floors of the townhouse at 110 East 76th Street in Manhattan. (Running through May 31st, the showcase benefits the Kips Bay Boys & Girls Club.)

None of the “trends,” for want of a better word, are in evidence in Michael Herold’s entry hall. What is most palpable here (and throughout most rooms) is the rekindled appreciation for historic styles that has been brewing for some time. Herold wrapped the space in a 17th-century Nicolas Poussin–inspired landscape painting scaled-up by London-based Iksel Decorative Arts, which even reproduced the crackled surface of the original work (the wall covering will be available through Schumacher).

This grounds more modern touches such as black-and-white striped upholstery, Curtis Jere sculptures, Joan Miró prints and an Alexander McQueen Monarch rug. The latter, says Herold, “symbolizes the metamorphosis of the process this house, and all we designers, go through each year.” 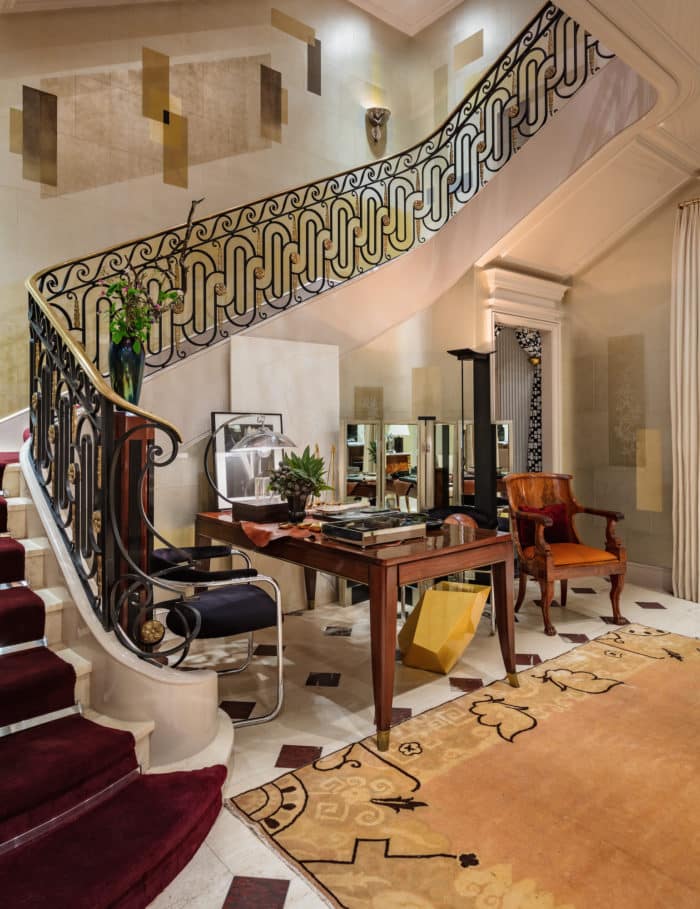 Dan Fink skews more Deco in his gallery at the bottom of the neoclassical stairs. The Rococo Italian bombé chest from Chinese Porcelain Company notwithstanding, the furnishings are mostly French 1930s and ’40s: a Jules Leleu table from Gallery BAC, André Sornay chairs from Bernd Goeckler and a plaster relief panel of Diana from Newel. The custom metallic wallpaper is by Gracie.

“I love taking classical ideas and reinventing them as something modern,” says Fink. Ergo 20th- and 21st-century touches like a modernist floor lamp from Wyeth and various contemporary objects on the table. 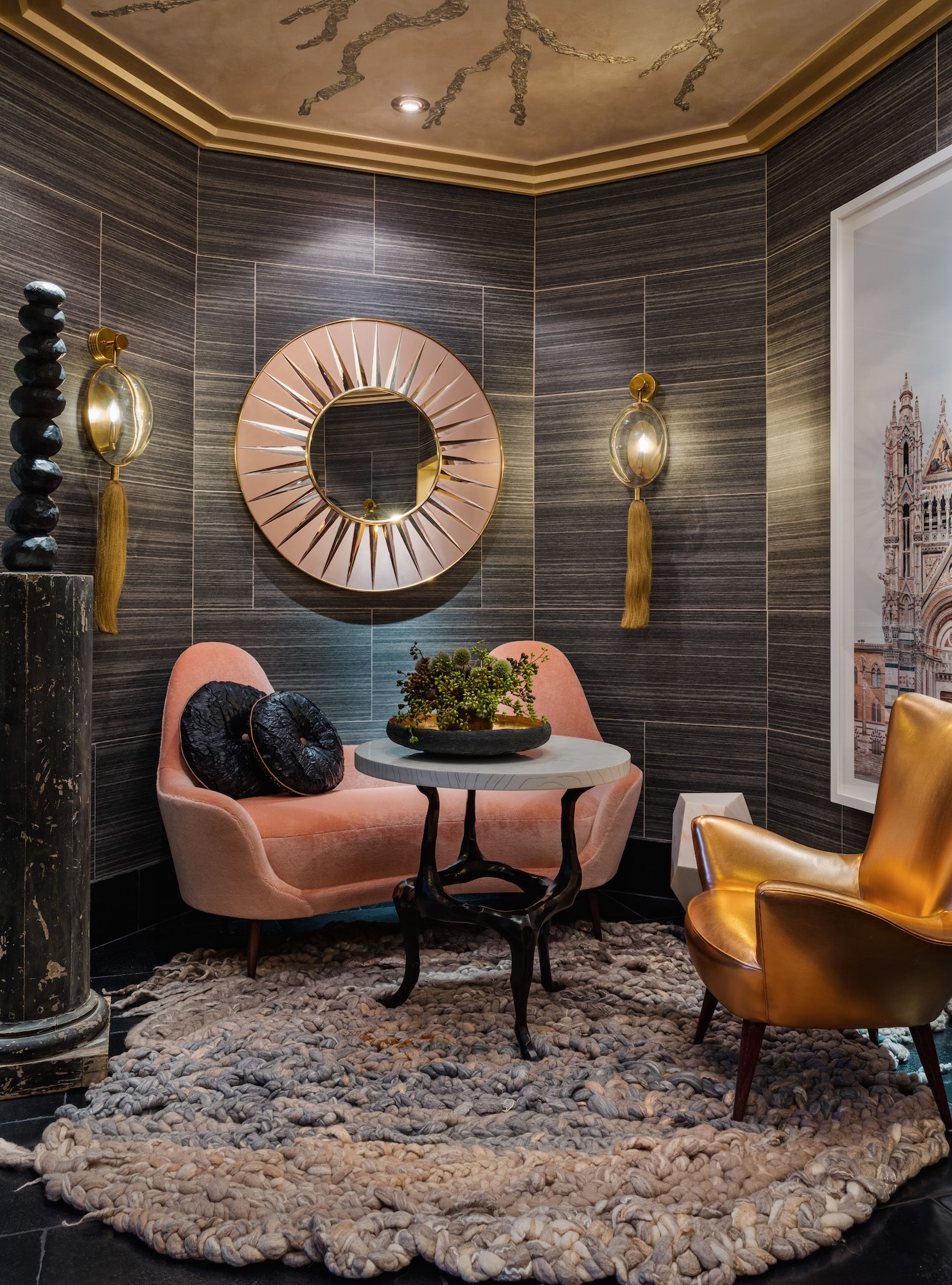 The first appearance of pink comes in Stefan Steil’s rooms, a paean to the Merchant Ivory film A Room with a View, which he calls “a pause between the urban exterior and the private interior of the home.” In this former pantry, Steil angled one of the walls and covered them all in a gray strié wallpaper to create the sense of a classical stone facade.

The room, ironically windowless, nevertheless frames “views,” one of them Markus Brunetti’s large-scale photo of Santa Maria Assunta in Siena (from Yossi Milo Gallery), which set the palette for the spaces. The work’s pink is picked up in a sofa in the style of Cesare Lava covered in Élitis velvet mohair and made by Lost City Arts that is, of course, all curves. 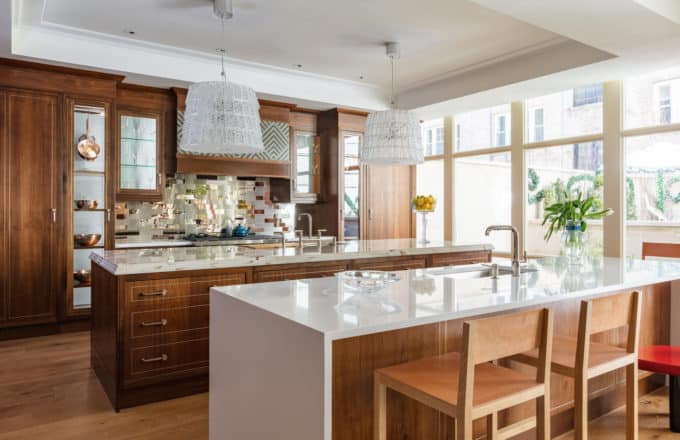 From here one moves into the Clive Christian kitchen, with an adjacent breakfast room by David Netto. Christian marries one of his more modern lines — Metro Deco in mahogany — with shelves lined in aqua leather. The cabinetry frames Dacor appliances from their Modernist collection and envelops two Baccarat chandeliers over the island. 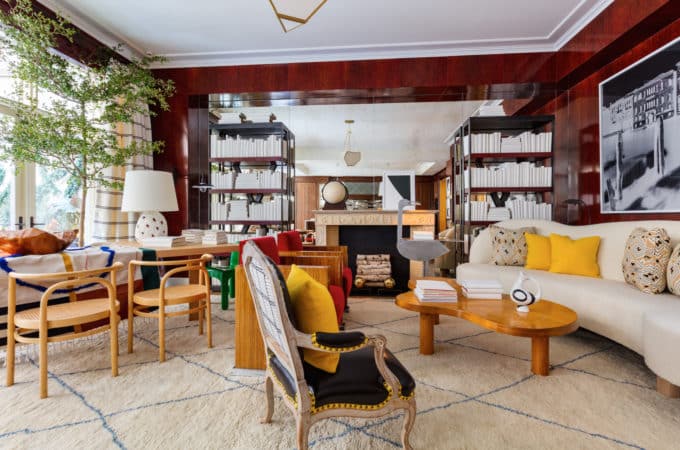 Netto paired all Christian’s walnut with walls painted in a glossy red tortoise shell, a color he associates with the 1980s, when he came of age.

Above a custom curvilinear sofa hangs a silver gelatin print of a Venetian scene by photographer Vera Lutter. He completes the seating area with a pair of zebrawood Art Deco chairs from Alan’s Antique Restoration and a Louis XV fauteuil from Côté Jardin.

A Charlotte Perriand table for Cassina anchors the other side of the room and, around it, bentwood chairs reminiscent of Thonet connect the room to Vienna, though to an earlier period than the Wiener Werkstätte, which would blossom there a half century later. 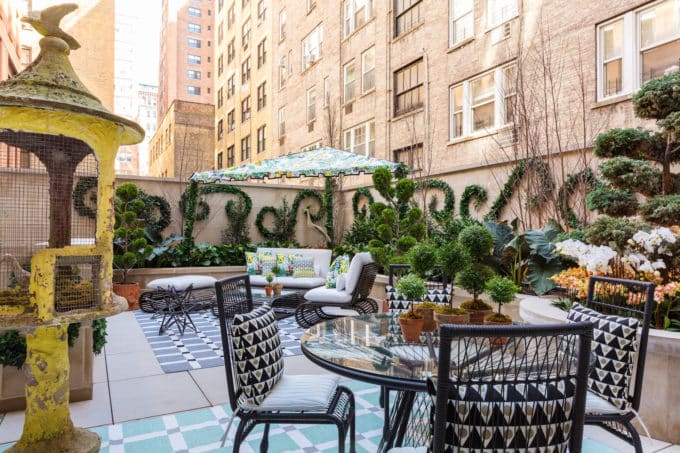 Josef Frank comes into play in Mario Nievera and Keith Williams’s garden, with abundant use of the architect’s Citrus Garden fabric. Though Frank was associated with Sweden, where he became a citizen in 1939, he was actually born in Vienna and surely experienced the work of the Secessionists.

Yet he took a more lighthearted approach to textile design, which stemmed from his love of nature. The Citrus Garden pattern covers the cushions on the Stori Modern outdoor furniture and a tent over one seating area. The whimsy continues with a faux bois cement birdcage from Fleur and faux bois planters by Nievera. 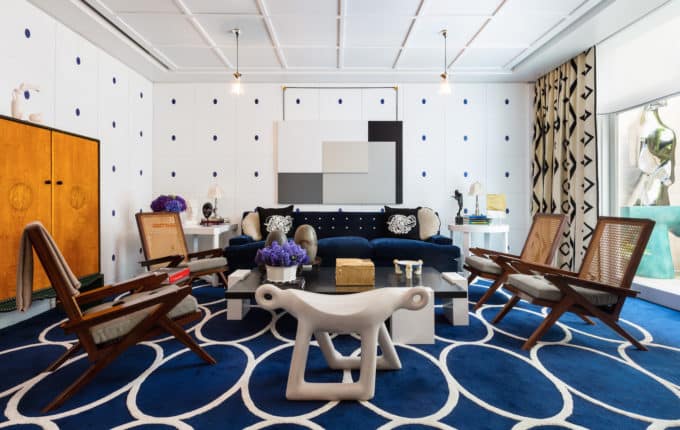 Coincidentally, more Josef Frank fabrics appear in Juan Montoya’s patio downstairs, which is reached through a series of rooms inspired, he says, by — you guessed it — the Wierner Werkstätte movement. “It’s not a copy of that time,” he cautions, “but a modern touch to the period.”

The room has era-appropriate pieces — reproductions of Josef Hoffmann chairs from Montoya’s collection and a chandelier attributed to Koloman Moser and Hoffmann (from Kimcherova) at the bottom of the stairs, and Secessionist-style grids on several pieces of furniture.

Yet the mix is pretty freewheeling, too, and includes a 1940s Swedish cabinet by Otto Schulz from Hostler Burrows; Montoya’s own Petal table, coffee table and custom sofas; and sculpture by Brazilian artist Saint Clair Cemin from Paul Kasmin Gallery. 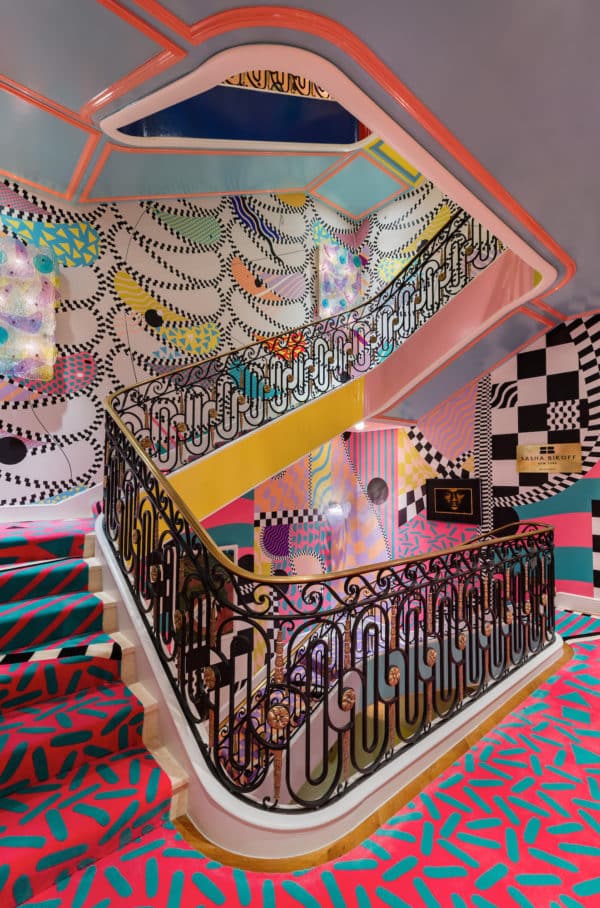 At the second-floor landing, we first encounter Sasha Bikoff’s eye-popping Memphis Group–inspired stairwell, which continues to the top (up to this floor, the stair walls were covered by Fink in the silvery Gracie paper). “I wanted to put the ‘show’ in showhouse,” she says. That she did. Furnishings are almost beside the point, yet her choices — from Cosulich Interiors & Antiques, Bernd Goeckler and Venfield — acquit themselves elegantly against the riot of pattern and color. 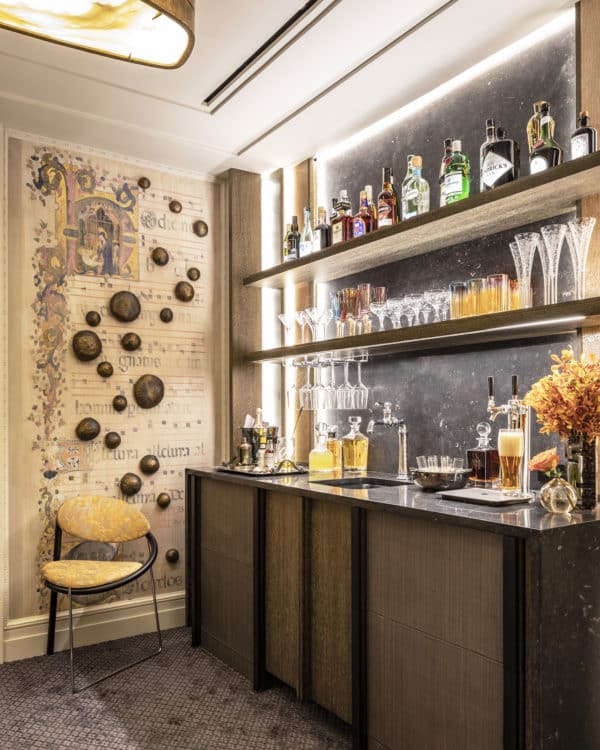 Off this landing, Wesley Moon created “a trifecta of jewel boxes”: his take on a Gilded Age butler’s pantry; a wet bar (where an Ingrid Donat cabinet from Carpenters Workshop Gallery stands against walls covered in a blown-up illuminated manuscript from the Metropolitan Museum of Art); and an elevator landing (where a show-stopping mirror festooned with duck feathers by photographer Billy Cunningham, unearthed at Jonathan Burden, is flanked by Italian sconces from Gaspare Asaro). 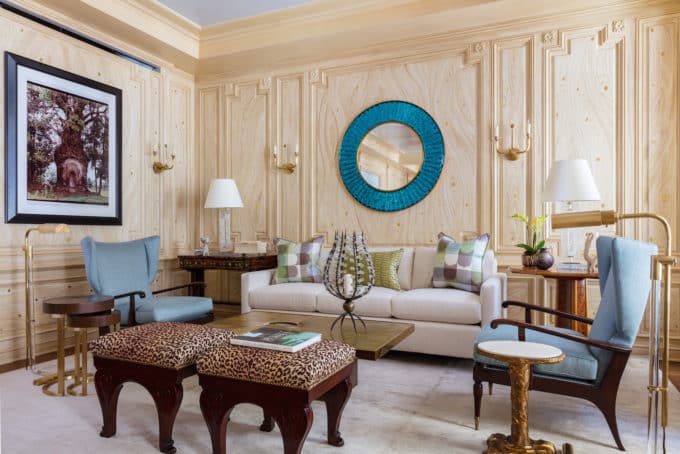 Next door, a living room by Bunny Williams (who once bid on the Cunningham mirror herself) and Elizabeth Swartz riffs on treehouse living with faux bois wall panels, an etched bronze table by Willy Darrow from Newel resembling a gilded, laterally cut tree stump, and a leafy chandelier by Brooklyn-based Rosie Li. Curved sofas function like parentheses around a spectacular faceted coffee table by Newel. 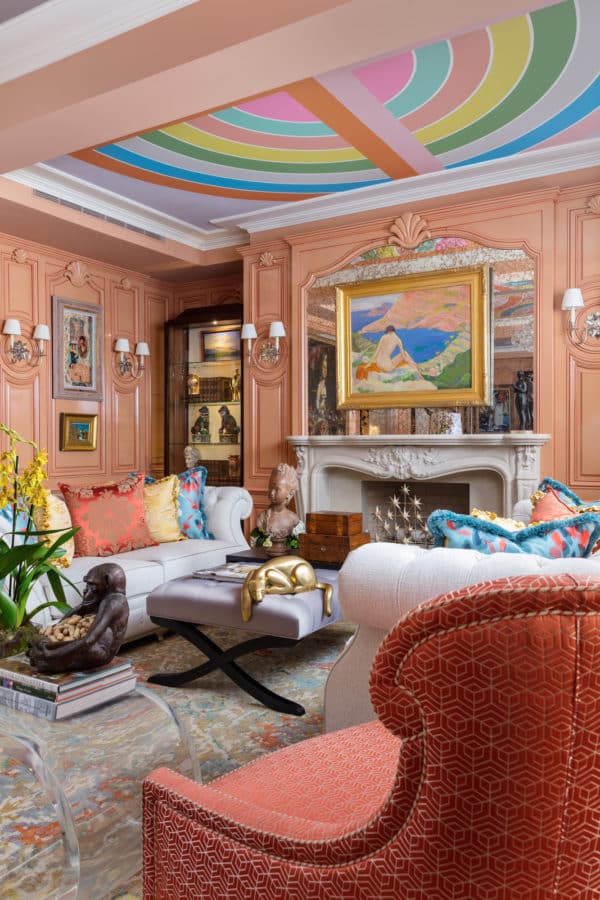 Across the hall is Barbara Ostrom’s dining room-library, which is wrapped in ornate millwork the designer lacquered a salmony pink. For the thoroughly modern ceiling, she had Andrew Tedesco reproduce a Frank Stella painting. On this floor, we also find Scott Sanders’s jewel box powder room, rich with wood and an embossed and hand-painted de Gournay wallcovering. 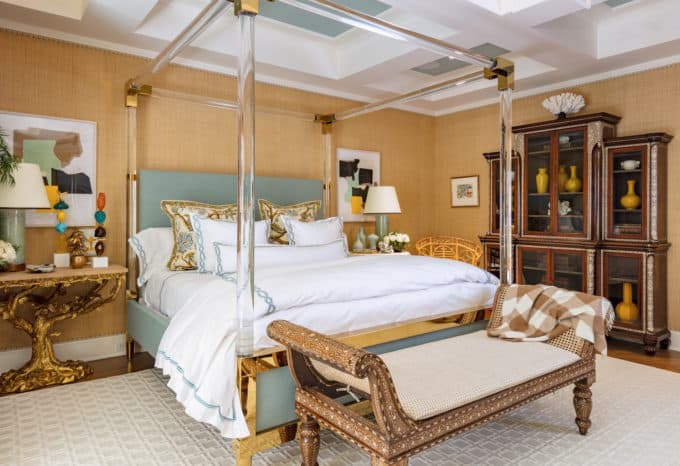 Up a flight of stairs, Alessandra Branca’s bedroom purveys her customarily well-traveled mix of old and new, continental and exotic. The unifying factor? “It’s all about quality,” she says. “We have to continue to embrace quality, hold it, promote it.”

Centering the grass cloth-lined space is a contemporary acrylic-and-brass bed from Bernhardt, which is intriguingly juxtaposed with ravishing Anglo-Indian pieces (in particular a 19th-century breakfront from Newel), Karl Springer end tables and antique bamboo chairs from Liz O’Brien, and a giltwood console from Dessin Fournir. 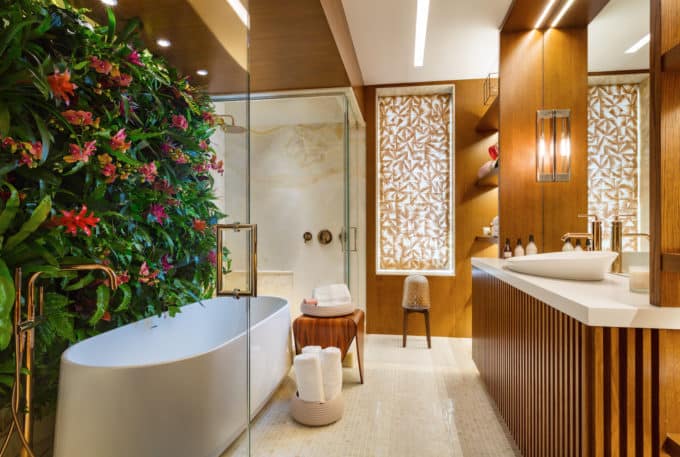 The dressing room and bath of this bedroom, outfitted by Brazilian Marcia Tucker, becomes a venue for bringing art into the most private of spaces. Ornare millwork and pink-padded walls in the dressing room house Brazilian modernist furnishings by Sergio Rodrigues (from R and Company) and Jorge Zalszupin (Espasso), while the bath also showcases a Zalszupin stool (Espasso) and a Haas Brothers stool (R and Company), along with Saint-Louis crystal lighting and accessories. 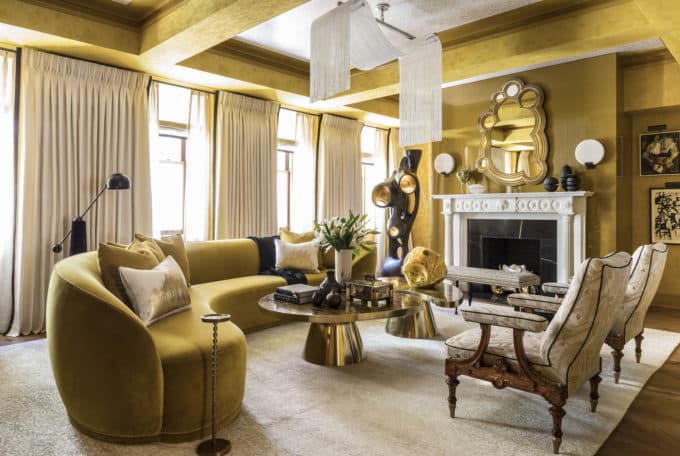 Drake/Anderson’s mustard-yellow salon across the hall is a suave olio that invites luxurious lounging. Caleb Anderson designed the curved sofa that faces off, across contemporary French coffee tables inlaid with tiger eye from Bernd Goeckler, a pair of Aesthetic period chairs from Carlton Hobbs. The latters’ Lelievre fabric, though not perhaps purposefully, nevertheless has an affinity for Viennese Secessionist sensibilities. The adjacent bar, illuminated by Apparatus sconces, has walls lined in random squares of smoked, clear and gold glass mirror. Ornate candlesticks from Newel top the bar itself, also custom-designed by Anderson. 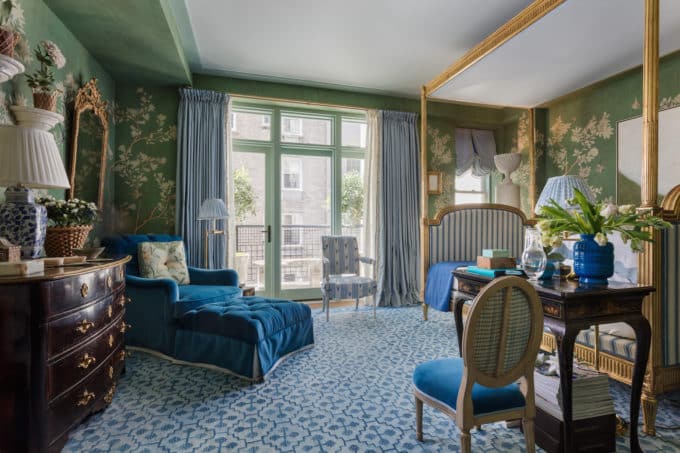 On the fourth floor, three designers conjure strikingly different takes on bedrooms. Mark D. Sikes created “a boudoir fit for a princess,” he says. Wrapped in hand-painted Gracie wallpaper and featuring fabrics from his own new collection for Schumacher, the mix includes antiques formerly owned by princesses in their own right — Bunny Mellon and C.Z. Guest — including an 1870 Maeiji lacquered stand and Louis XV mirror and commode from James Sansum Fine & Decorative Art. Vladimir Kanevsky created delicate potted porcelain flowers for the room as well. 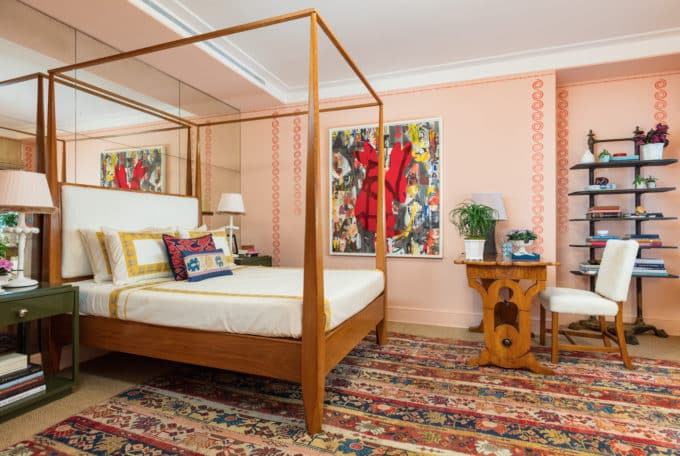 Katie Ridder’s bedroom next door was initially inspired by a Wiener Werkstätte exhibit at Neue Gallerie, though it draws on other periods as well: an Austrian Biedermeier desk from Newel, plaster bedside lamps from Liz O’Brien and works from Pace Prints by Donald Baeschler, Arturo Herrera and Louise Nevelson. The pink scheme derives from Doris Leslie Blau’s Oushak carpet. This room also has a love seat that, yes, curves around a Gio Ponti-style table from Eric Appel. And Mark del Toro mixes the palest of pinks with celadon for a comfortable, serene scheme in his bedroom, which began with del Toro’s own 1960s Robert Crowder room screen as headboard. Various pieces from Newel (a French chandelier, Deco semanier, sculpture and art), a Murano mirror from Cosulich and a Flessas Design bench round out the offerings. 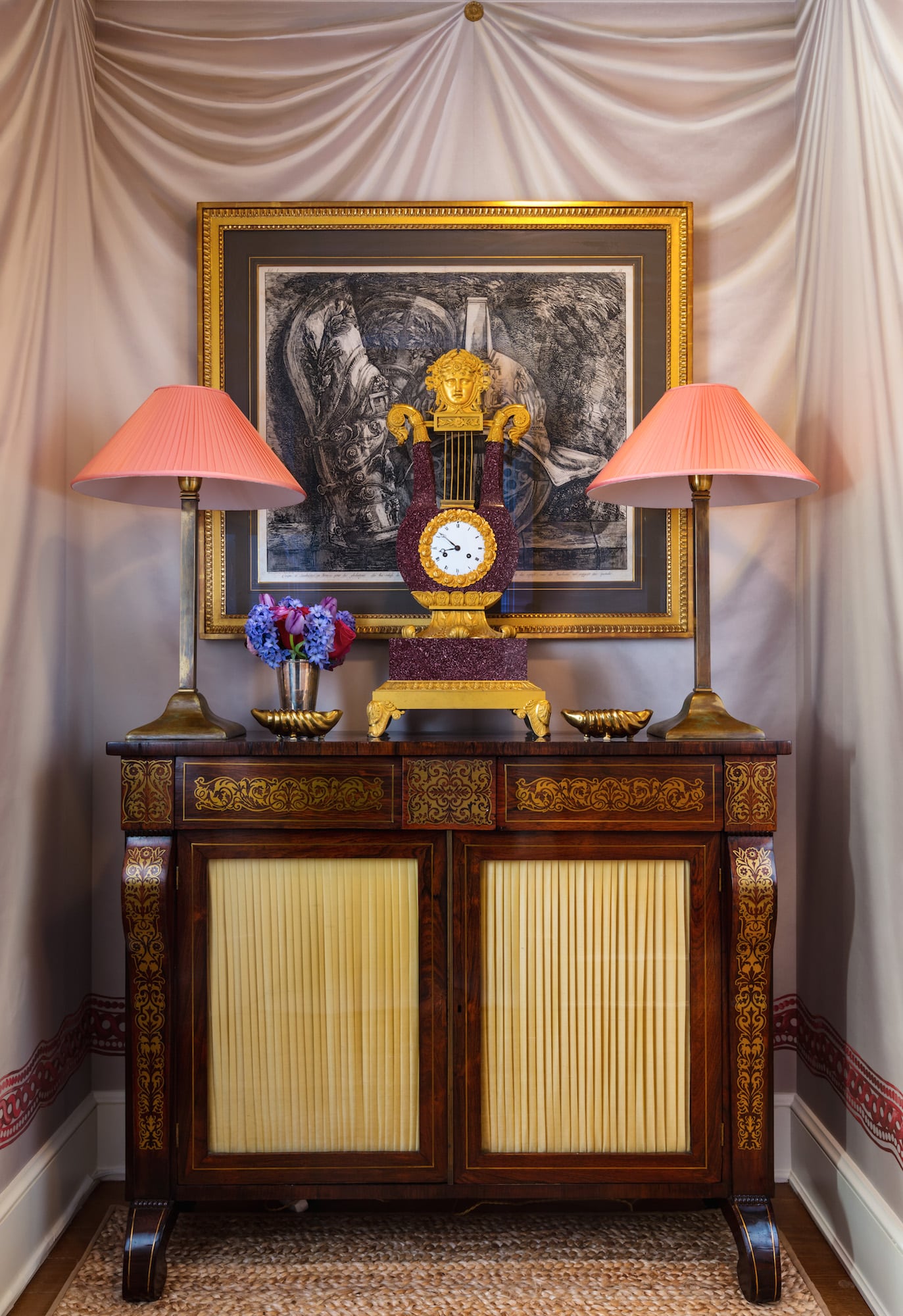 Also on this floor we find Alexa Hampton’s “Olympia Folly,” a campaign-themed space where de Gournay wallpaper makes the sitting room appear tented. But the Napoleonic War campaigns had nothing on the furnishings here, which include a secretary from Newel and a vestibule console from Niall Smith Antiques. 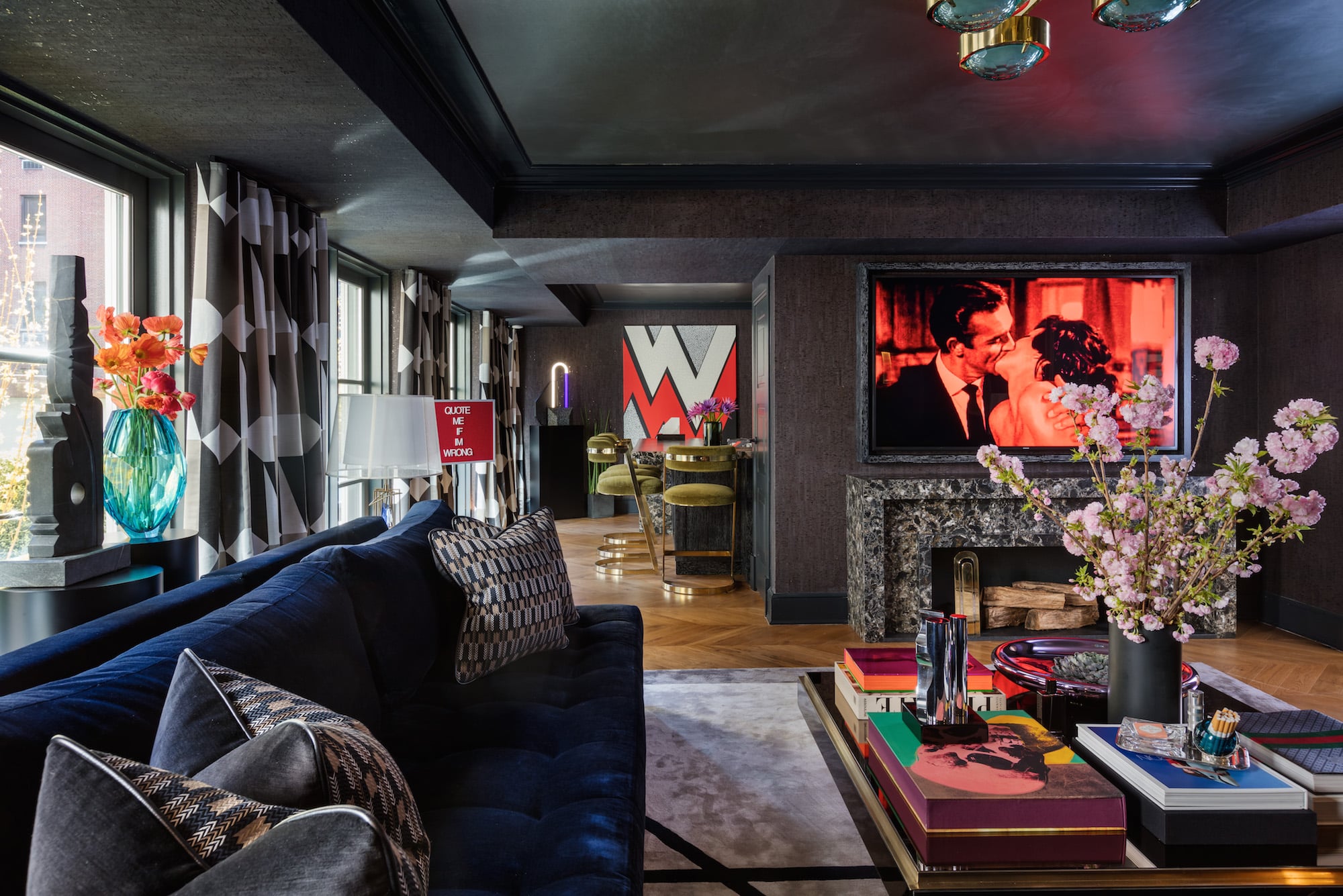 B.A. Torrey’s moody blue fifth-floor “Afterparty” — a 1970s-inspired lounge showcasing a flush-mount chandelier from Gaspare Asaro and various 1930s French and Italian pieces from Bernd Goeckler — could not be more of a contrast to Phillip Mitchell’s room across the hall. Collections of export porcelain, glass paperweights, brass candlesticks and more crowd tables and an étagère, while a cast bronze sheep from David Duncan grazes by a games table. What the neighboring rooms have in common is art. Lots of it. 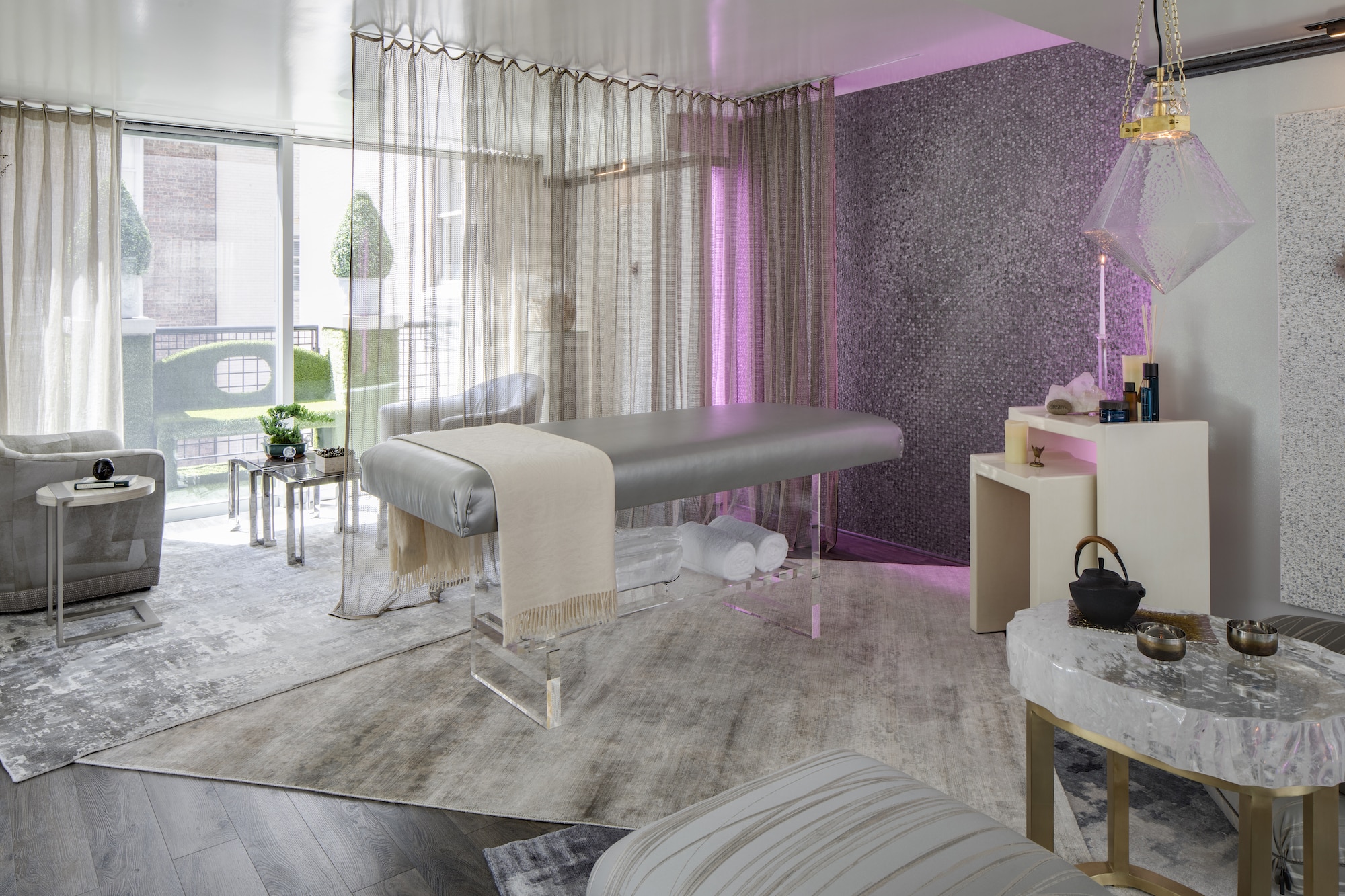 Finally, on the top floor, a soothing anomaly: Charles Pavarini III’s home wellness retreat. Natural crystals abound, along with Eastern-themed items like lotus side tables from Maison Gerard and the 3 Souls sculpture by Joël Urruty from Isabella Garrucho Fine Art. Wellness rooms have not been a staple of designer showcases (though fitness rooms have).

Clearly, the ever-expanding global consciousness about holistic health has finally hit the show house circuit, and the fact that designers are beginning to tackle it with aesthetic sophistication its a good thing. And guess what? At least in Pavarini’s room, curved chaise and a pink light turn out to be perfect elements here, too.