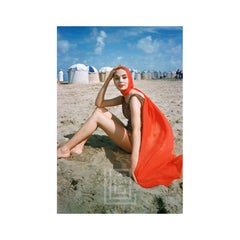 H 20.08 in. L 53.55 in.
Hermes orange TOHU BOHU Twilly Scarf
By Hermès
Located in Zürich, CH
100% authentic Hermes 'Tohu Bohu Twilly' scarf by Claudia Stuhlhofer Mayr in orange silk twill (100%) with details in yellow, green, burgundy, beige and white. Has been worn and is i...
Category

Hermes Orange Crowns by Julia Abadie Silk Scarf
By Hermès
Located in Paris, FR
Hermes silk scarf Crowns by by Julia Abadie featuring an orange ground with crowns on and a Hermès signature. First issue 1969 In good vintage condition. Made in France. 35,4in. (90...
Category

W 27.96 in. L 41.74 in.
Hermes orange FACE AU LARGE 90 silk Scarf
By Hermès
Located in Zürich, CH
Hermes 'Face au Large 90' scarf by Dominique Jarlegant in orange silk twill (100%) with peach border and details in beige, taupe and cream. Has been worn and is in excellent conditio...
Category

H 16.5 in. L 16.5 in.
1960s Christian Dior Chapeaux Pink & Orange Paisley Scarf Wrap Hat
By Christian Dior, Marc Bohan
Located in Philadelphia, PA
TheRealList presents: a vintage Dior wrapped scarf hat in orange and pink paisley. This piece was designed in the 1960s while the house was under the creative direction of Marc Bohan...
Category

Pucci Silk Orange Cream Psychedelic Print Scarf
By Emilio Pucci
Located in Los Angeles, CA
This is a fantastic Pucci scarf. The scarf features an array of colors from orange cream, purple, white, raspberry, and periwinkle. A great size and perfect for the Pucci enthusiast...
Category

W 35.44 in. L 35.44 in.
HERMES orange red silk twill CLIC CLAC 90 Scarf
By Hermès
Located in Zürich, CH
100% authentic Hermes 'Clic Clac 90' scarf by Julia Abadie in red and orange silk twill (100%) with white background and details in black and beige. Has been worn and is in excellent...
Category

H 22 in. W 28 in. D 11 in.
auth HERMES pink orange PAPEROLES 90 silk twill Scarf
By Hermès
Located in Zürich, CH
Hermes 'Paperoles 90' scarf by Claudia Stuhlhofer Mayr in orange silk twill (100%) with pink border and turquoise hem. Has been worn and is in excellent condition. Width 90cm (35.1i...
Category

Orange Scarf For Sale on 1stDibs

Find the exact vintage or contemporary orange scarf you’re shopping for in the variety available on 1stDibs. Our collection includes a variety of colors, spanning Orange, Beige, Red and more. You’re likely to find the perfect orange scarf among the distinctive accessories we have available, which includes versions made as long ago as the 19th Century as well as those produced as recently as the 21st Century. An accessory like this designed by Hermès, Yves Saint Laurent and Emilio Pucci — each of whom created a beautiful version of this treasured item — is worth considering. If you’re browsing our inventory for these accessories, you’ll find that many are available today for women, but there are still pieces to choose from for men and unisex.

Finding the Right Scarves for You