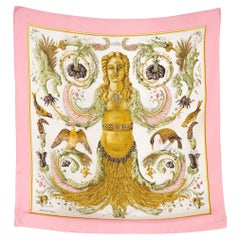 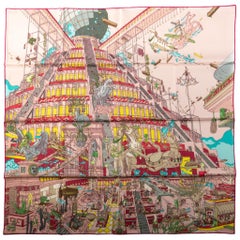 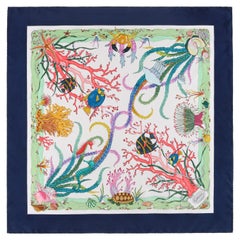 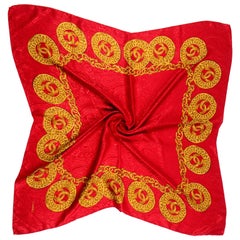 Gianni Versace Vintage Blue & White Stripe Chevron Floral Silk Scarf
By Gianni Versace
Located in Portland, OR
This vintage Gianni Versace scarf is in a navy and white stripe print with colorful chevron stripes and floral print around the trim. The colors in the chevron are in shades of: oliv...
Category

Vintage Gucci Blue Black and Yellow Gold Cheetah Scarf
By Gucci
Located in Portland, OR
This is a great Gucci vintage neck scarf with a Cheetah or Leopard in shades of blue, black and white. This 19" cotton Gucci Scarf can be worn or framed!
Category

Hermes Les Allures Du Cheval Silk Scarf Vintage
By Hermès
Located in North Miami, FL
This very special rare vintage Hermes silk scarf was designed by Phillipe Ledoux it was an early issue and as done most likely in the late 60's. These were done between the 60's and ...
Category

Hermes Paris Vintage Silk Scarf 1971 Feux de Route Caty Latham
By Hermès
Located in Rome, Rome
HERMES scarf 'Feux de Route' by Caty Latham and originally issued in 1971. It has re-issued many times, in different colours, formats and variations of. It features a coach in the ce...
Category

HERMES orange silk twill RENDEZ-VOUS AU 24 70 Scarf
By Hermès
Located in Zürich, CH
100% authentic Hermes 'Rendez-Vous au 24 70' scarf by Dimitri Rybaltchenko in orange silk (100%) with contrasting off-white hem and details in beige and brown. Has been worn and is i...
Category