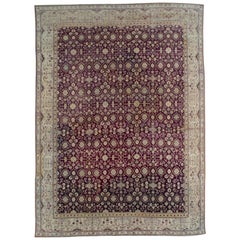 W 69 in. L 101 in.
Antique Agra Rug
Located in New York, NY
This northern Indian town rug has a layered pattern with tiny bottehs in the joined beige corners, a dark blue hexagonal field with an all-over Herati design, and a notched medallion...
Category 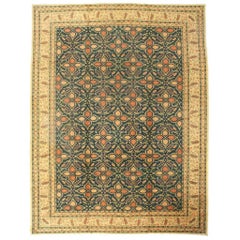 W 143 in. L 216 in.
Antique Agra Rug, circa 1880 11'8 x 15'
Located in New York, NY
Antique Agra rug, circa 1880. During much of the history of the Mongol Empire, Agra was its capital city. Architects and artisans, including many carpet weavers, were brought here fr...
Category

W 170 in. L 237 in.
Antique Indian Agra Rug
Located in Secaucus, NJ
An outstanding example of an antique Agra rug. Hand woven in India, circa 1900, the rug has the typical Agra red ground but filled with wonderful flowers all in a variety of decorati...
Category

W 60 in. L 90 in.
Antique Agra Rug, circa 1880 13'4 x 14'8
Located in Secaucus, NJ
This squarish extraordinarily beautiful rug has a wonderful ivory field complimented with traditional Agra reds that creates a true masterpiece of design and style. Agra rugs in this...
Category

W 166 in. L 247 in.
Antique Indian Agra Rug
Located in Norwalk, CT
Measures: 10'.1 x 16'.10 The art of manufacturing carpets was introduced in India, probably by the great mogul Akbar (1556-1605) which brought in Persian weavers together with skill...
Category

W 121 in. L 202 in.
Antique Indian Agra Rug
Located in Norwalk, CT
Measures: 8.11” x 11.9” The art of manufacturing carpets was introduced in India, probably by the great mogul Akbar (1556-1605) which brought in Persian weavers together with skille...
Category

W 107 in. L 141 in.
Antique Indian Agra Rug
Located in Norwalk, CT
The art of manufacturing carpets was introduced in India, probably by the great mogul Akbar (1556-1605) which brought in Persian weavers together with skilled pattern artists mainly ...
Category

W 151 in. L 193 in.
Antique Indian Agra Rug
Located in New York, NY
This is one of our large collection of square antique Indian urban carpets. It shows an all-over two-level split arabesque pattern on a golden field. Palmettes discreetly fill in the...
Category

W 51 in. L 84 in.
Antique Indian Agra Rug
Located in New York, NY
An early, first quarter 20th century Indian Agra carpet with an allover pattern made up of serrated lotus flower motifs. Each lotus flower is connected by a diamond lattice and symb...
Category

How Much are Antique Agra Rugs?