H 17.9 in. W 15.7 in. D 12.5 in.
Permutation
By Jesús Rafael Soto
Located in Tbilisi, GE
Screen-print on plastic and metal. Signed and numbered at the back. Signed Edition of 120
Category

H 8.27 in. W 5.91 in. D 3.94 in.
Jai Alai Suite Edition 60 of 300
By Jesús Rafael Soto
Located in Miami, FL
Jesús Rafael Soto was a Venezuelan artist known for his kinetic sculptures and large-scale installations. Like Alexander Calder and George Rickey, Soto’s delicate and responsive cons...
Category

H 19.75 in. W 19.75 in. D 2 in.
Mirroire
By Jesús Rafael Soto
Located in Tbilisi, GE
Screen-print on plexiglass and screen-print on mirror. Signature and number on the back; Edition of 99pc
Category 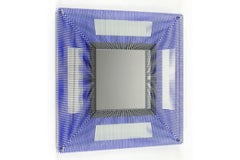 H 19.69 in. W 25.6 in. D 4.73 in.
Jesus Rafael Soto Sculpture
By Jesús Rafael Soto
Located in West Palm Beach, FL
A visually striking table sculpture from the Jai Alai series. From the edition of 300. Jesus Rafael Soto is represented in the collections of the MOMA, the Guggenheim and the Tate.
Category

Jesús Rafael Soto
Homenaje a Humano from An American Portrait, 1976

H 20 in. W 6 in. D 6 in.
Jesus Rafael Soto - Permutation
By Jesús Rafael Soto
Located in Milan, IT
Soto was a Kinetic and Op Artist, he died in 2005 in Paris. This little sculpture is particulary nice,"Permutation" from "museo moltiplicato"limited edition 98/120 in 1955-1978.
Category

On 1stDibs, there are several options of jesus rafael soto sculptures available for sale. Finding the ideal examples of these works for your living room, whether you’re looking for small- or large-size pieces, is no easy task — start by shopping our selection today. There are many variations of these items available, from those made as long ago as the 20th Century to those made as recently as the 21st Century. If you’re looking to add a jesus rafael soto sculptures that pops against an otherwise neutral space in your home, the works available on 1stDibs include that feature elements of black, gray, purple and more. These artworks have been a part of the life’s work for many artists, but the versions made by Jesús Rafael Soto are consistently popular. The range of these distinct pieces — often created in plastic, plexiglass and metal — can elevate any room of your home.

How Much are Jesus Rafael Soto Sculptures?

Jesus rafael soto sculptures can differ in price owing to various characteristics — the average selling price for items in our inventory is $17,500, while the lowest priced sells for $12,000 and the highest can go for as much as $35,000.