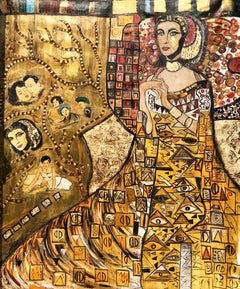 H 63 in. W 55.12 in. D 1.97 in.
Red Headed Flapper In Gold Scarf
Located in Minneapolis, MN
This opulent and provocative pastel on board is one of the many art deco glamour girl illustrations A.D. Neville created during his career as a movie magazine cover artist, and freel...
Category

H 29 in. W 32 in. D 1.75 in.
"Cleopatra in Glory," Brilliant Art Deco Painting in Cobalt Gold, Coral and Pink
Located in Philadelphia, PA
Painted as a glorious, color-drenched frieze, this piece by the celebrated Chicago artist, Carl Hoeckner, depicts a half-nude Cleopatra being carried on her litter by Nubian servants...
Category

H 35.25 in. W 59 in. D 1 in.
Art Deco Oil on Canvas Portrait Painting of Woman in Gilt Frame Signed Fuller
Located in Oklahoma City, OK
Figural oil painting on canvas of a woman. Beautiful piece with muted hues of purple, red, cream light green. The woman in this piece is looking slightly to her right and shows o...
Category

H 8.25 in. W 11 in. D .1 in.
Original Art Deco Gouache on Paper by Erte in White Gold Custom Frame
By Erté
Located in New York, NY
Vibrant original Art Deco gouache on paper of a theatrical costume design signed Erte at the lower right. An exquisite stylized depiction of a female figure posed in a revealing even...
Category

H 20 in. W 17 in. D 1 in.
Art Deco Engraving by George Barbier from Chansons De Bilitis Portfolio
By George Barbier
Located in North Miami, FL
This lovely sensual rare French Art Deco engraving from the coveted portfolio Chansons de Bilitis in the 1920s France is by the famed artist; George Barbier. It is exquisitely execut...
Category

H 19.5 in. W 17.75 in. D 1 in.
Lifestyle Painting by Zene Fountayne
Located in Los Angeles, CA
Still Life motif by French artist Zene Fountayne. Oil on canvas featuring a motif of a hat, flowers and draped fabric. His work was exhibited at the 1930 Salon of the Independents of...
Category

H 35.75 in. W 58.75 in. D 1.25 in.
Vintage Italian Oil Painting of Venice
Located in Austin, TX
Beautifully presented in a 23-carats gold-leafed frame, this wonderful turner like oil painting shows a daily 18th century scene of the Grand Canal in the city of Venice, with the Ca...
Category

Alisa Fomina
The Coronation of the fragile dragonfly - made in gold, blue, pink color, 2017

H 37 in. W 25 in.
New York City Street Scene
Located in Buffalo, NY
A beautiful gouache on paper depicting a street in lower Manhattan circa 1920's. This beautiful art deco work is unsigned but clearly created by a masterful hand.
Category

H 16 in. W 20 in.
Hunters and Mouflons Near a Waterfall
By Gaston Suisse
Located in Paris, FR
Pencil, charcoal and oil pastel on a gold leaf background Signed lower right.
Category

Hunters and Mouflons Near a Waterfall

Family of Swans Wall Panel in the Manner of Jean Dunand

H 18 in. W 55 in. D 25 in.
Botanical V, Art Deco, realistic botanical with gold and silver leaf
Located in Burlingame, CA
Deborah Lawrence Schafer’s artwork conveys an ethereal quality. Her primary interest is in the capacity for weather and environmental conditions to transform landscape and its relati...
Category

H 48 in. W 36 in. D 2.5 in.
Figure 5 in Gold, after Art Deco Oil Painting by Charles Demuth
Located in Fairhope, AL
This large Fine Art masterpiece is a faithful yet nuanced reproduction of a vintage Art Deco poster titled "Figure 5 in Gold" while the original oil painting was rendered in 1928 by ...
Category

H 57 in. W 48 in. D 2.13 in.
"Hand" - gold block print on black paper
Located in Brooklyn, NY
Gold pigment on black paper block print, framed, signed by the artist. Edition of 20. 10" x 7,5" without frame Please allow up to two weeks for individual production and framing. ...
Category

H 10 in. W 7.5 in.
"Sitting on the Old Chair" - gold block print on black paper
Located in Brooklyn, NY
Gold pigment on black paper block print, nude art, framed, signed by the artist. Edition of 20. Please allow up to two weeks for individual production and framing. "I have been try...
Category

H 22.5 in. W 5 in.
"Sitting on the Modern Chair" - gold block print on black paper, nude female
Located in Brooklyn, NY
Gold pigment on black paper block print, nude art, framed, signed by the artist. Edition of 20. Please allow up to two weeks for individual production and framing. "I have been try...
Category

H 28 in. W 22 in.
Greyhounds in the Round Silhouette
By Wilhelm Hunt Diederich
Located in New York, NY
Hunt Diederich expanded the definition of sculpture to maintain its relevance in the 20th century by fusing Modernism, Folk Art, and aspects of the Arts and Crafts movement to create...
Category

Wilhelm Hunt Diederich
Greyhounds in the Round Silhouette

H 18.51 in. W 24.41 in.
Art Deco Portrait of Lady
Located in Cirencester, Gloucestershire
Veyr fine large scale French oil painting with gold leaf, on canvas. The work is painted in the Art Deco style and captures this enigmatic lady standing in a fantasy setting. The p...
Category

H 39 in. W 33 in.
Japanese Two-Panel Screen, Rimpa and Deco Style Painting of Flowers by Stream
Located in Hudson, NY
Furosaki (tea screen) painted in a Deco-like Rimpa style, reminiscent of Korin School. Nadeshiko (dyanthus) flowers peaking through the scenery, with kikyo or balloon flowers in the ...
Category

H 32.25 in. W 71 in. D .75 in.
"Pomona with Rain and Lightning," Monumental Art Deco Mural in Gold and Bronze
Located in Philadelphia, PA
Spectacular in size, subject and materials, this mural depicting the goddess Pomona raining an abundance of golden fruit upon the earth was reputedly painted for an ocean liner in th...
Category

"Pomona with Rain and Lightning," Monumental Art Deco Mural in Gold and Bronze

H 63 in. W 84.65 in. D 0.4 in.
Panel Despicting a Drakkar Observed from the Coast by GAP, 1935
By Travail Francais
Located in Paris, FR
Lacquered and polychromed isorel and gold leaf panel on isorel Signed GAP and dated 1935 lower right.
Category

Panel Despicting a Drakkar Observed from the Coast by GAP, 1935

Size: 4-6
Harpers Bazaar I, fashion gold painting
By K. Odal
Located in Stockholm, SE
Acrylic and gold leaves on canvas. Inspiration from art history, architecture, design and fashion Haute Couture is related to Paris and can be referenced back as early as the 17th ...
Category

H 23.63 in. W 23.63 in. D 1.58 in.
Harpers Bazaar ll, fashion gold painting
By K. Odal
Located in Stockholm, SE
Acrylic and gold leaves on canvas. Inspiration from art history, architecture, design and fashion Haute Couture is related to Paris and can be referenced back as early as the 17th ...
Category

H 12.6 in. W 12.6 in. D 0.99 in.
Decorative Painted Panels
By Codor Design
Located in Seattle, WA
These unique painted panels are done in an Art Deco style with beautiful blues, jewel tones and gold leaf. Painted by Tamara Codor.
Category

H 14 in. W 18 in.
China Gold
By Martha Sawyers
Located in Minneapolis, MN
Martha Sawyers made a name in the illustration world for her deeply sensitive and captivating portraits of Far Eastern life, which appeared in mainstream glossy magazines from the 19...
Category

H 83 in. W 72 in. D 0.75 in.
Suzanne Bertillon Art Deco Cubist Painting Custom Framed French Vintage
By Suzanne-Marguerite Bertillon
Located in North Miami, FL
This sensual and arresting oil on canvas French Art Deco vintage cubist painting by Suzanne Bertillon is of the period and signed lower left. It is entitled "Nude". It has been recen...
Category

How Much are Art Deco Gold Paintings?