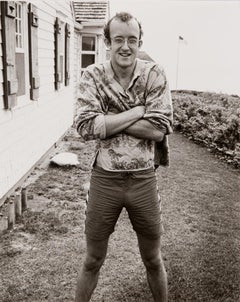 H 10 in. W 8 in.
Andy Warhol Photograph of Montauk Estate with Two Unidentified Men circa 1975
By Andy Warhol
Located in Los Angeles, CA
Image dimensions: 8 x 10 in. Framed dimensions: 16.5 x 18 in. Work is framed to archival standards by Handmade Frames of Brooklyn, New York. This is a unique work. Work comes w...
Category

H 16.5 in. W 18 in.
Halston Holding American Flag at Warhol's Montauk Estate
By Andy Warhol
Located in Los Angeles, CA
This is a unique work. Dated 'Jul 6 1982' (on the reverse). Stamped on verso by The Estate of Andy Warhol and The Andy Warhol Foundation for the Visual Arts. Annotated with Foundatio...
Category

H 10 in. W 8 in.
Mr. Winters, the Caretaker of the Montauk Estate
By Andy Warhol
Located in Los Angeles, CA
Illustrated in The Andy Warhol Diaries by Andy Warhol. Edited by Pat Hackett, Warner Books, 1991. Image dimensions: 10 x 8 in. Framed dimensions: 18.5 x 16 in. Work is framed to arc...
Category 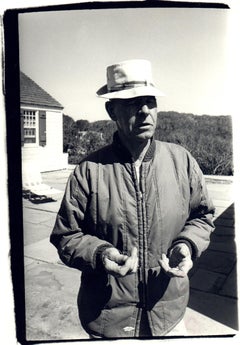 Andy Warhol
Mr. Winters, the Caretaker of the Montauk Estate, circa 1976

H 19 in. W 13 in. D .03 in.
Mick Jagger Serving Tea at Warhol's Montauk Estate (UNIQUE)
By Andy Warhol
Located in Southampton, NY
Framed by Handmade Frames to archival standards. Image comes with letter attesting to authenticity by The Andy Warhol Foundation for the Visual Arts Authentication Board. Stamped o...
Category 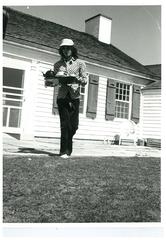 H 4.25 in. W 3.5 in. D 0.1 in.
Art Deco Three TierTable from the Estate of Andy Warhol
Located in New York, NY
Great machine Age design ,Bakelite over Wood and Nickel stem and fittings Originally purchased at Alan Moss in 1999 and the provenance of the stunning table was that it was from the ...
Category

Art Deco Three TierTable from the Estate of Andy Warhol

H 19 in. W 13 in. D .03 in.
Sothebys Six Volume Catalog of Andy Warhol Estate Auction 1988
By Sotheby's
Located in Easton, PA
Boxed set of six catalogs of the Sothebys auction in 1988 of the estate of artist Andy Warhol. Includes separate printout of prices realized. Weekly deliveries to manhattan for ap...
Category

Find the exact andy warhol estate you’re shopping for in the variety available on 1stDibs. Making the right choice when shopping for a andy warhol estate may mean carefully reviewing examples of this item dating from different eras — you can find an early iteration of this piece from the 20th Century and a newer version made as recently as the 21st Century. If you’re looking to add a andy warhol estate to create new energy in an otherwise neutral space in your home, you can find a work on 1stDibs that features elements of gray, orange and more. Creating a andy warhol estate has been a part of the legacy of many artists, but those crafted by Andy Warhol and Jack Mitchell are consistently popular. Artworks like these — often created in silver gelatin print, archival pigment print and paper — can elevate any room of your home.

How Much is a Andy Warhol Estate?

A andy warhol estate can differ in price owing to various characteristics — the average selling price for items in our inventory is $4,488, while the lowest priced sells for $550 and the highest can go for as much as $84,975.