H 19 in. Dm 8 in.
Gunnar Nylund Chamotte Stoneware Table Lamp for Rörstrand
By Gunnar Nylund, Rörstrand
Located in Stockholm, SE
Scandinavian modern rare ceramic lamp by Gunnar Nylund for Rörstrand, Sweden. The lamp was made in the 1940s of chamotte clay and finished with a cream colored luster glaze. Original...
Category

H 9.85 in. Dm 5.52 in.
Gunnar Nylund Chamotte Stoneware Table Lamp for Rörstrand
By Gunnar Nylund, Rörstrand
Located in Stockholm, SE
Scandinavian Modern rare vintage ceramic table lamp by Gunnar Nylund for Rörstrand, Sweden. The lamp was made in the 1940s of chamotte clay and finished with a mustard colored luster...
Category

H 32 in. W 12 in. D 4.5 in.
Italian Mid-Century Modern Round Ceramic Table Lamp by Bruno Gambone, Signed
By Bruno Gambone
Located in New York, NY
A round, striped stoneware table lamp with shade by Bruno Gambone, signed on bottom. Recently rewired for US specifications, Italy, circa 1950. Available to see in our NYC Showroom ...
Category 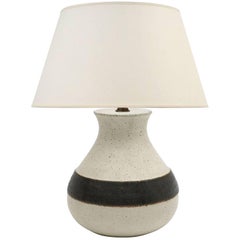 H 27.96 in. W 15.75 in. D 9.85 in.
Monumental Size Mid-Century Modern Italian Sgraffito Table Lamp
Located in Chesterfield, NJ
Handsome and impressively sized ceramic table lamp. This lamp is 46 inches to the top of the finial, has subtle coloring with incised vertical lines, and sits on a wooden base. All n...
Category

Pair of Mid-Century Modern Ceramic Lamps in a Sandstone Strata

H 24.75 in. Dm 7 in.
Mid-Century Modern Sculptural Black Glazed Ceramic Lamp with Chrome Base
Located in New York, NY
This beautiful Mid-Century Modern ceramic lamp was realized in the United States, circa 1960. It features an organic protuberant form finished in a lustrous black glaze that extends ...
Category

H 34 in. Dm 12 in.
Mid-Century Modernist Black Glazed Ceramic Lamp with Chrome Base
Located in New York, NY
This beautiful Mid-Century Modern ceramic lamp was realized in the United States, circa 1960. It features an organic protuberant form finished in a lustrous black glaze that extends ...
Category

H 28 in. Dm 11 in.
Mid-Century Modern Ceramic Tubular Lamp, 1970s
Located in Budapest, HU
This artisan piece has a punched-trough design with plenty of holes to let light through. It's a glazed ceramic piece in mid-century modern style, in orange and yellow color, from th...
Category

H 34.26 in. Dm 17.72 in.
Mid-Century Modern Lamps in Orange Ceramic
Located in Dallas, TX
A very nice pair of Mid-Century Modern table lamps is a crackled ceramic. Bright orange. Pretty shades that look to be silk. Dimensions are to top of harp and diameter is the shade.
Category

H 39 in. Dm 14 in.
Mid-Century Modern Dutch Ceramic Table Lamp
Located in Weesp, NL
Rare ceramic table lamp made in the Netherlands during the early 1960s. The lamp is in great condition without any cracks or chips. Measurements: H 26 x W 19 x D 19 cm.
Category

How Much is a Mid Century Modern Ceramic Lamp?

Finding the Right Table Lamps for You

Perfect for lighting your nightstand or reading nook, table lamps play an integral role in styling an inviting room. A well-crafted antique or vintage table lamp does more than provide light; the right fixture-and-table combination can add a focal point or creative element to any interior.

Proper table lamps have long been used for lighting our most intimate spaces. In the years before electricity, lamps used oil. Today, a rewired 19th-century vintage lamp can still provide a touch of elegance for a study.

After industrial milestones such as mass production took hold in the Victorian era, various design movements sought to bring craftsmanship and innovation back to this indispensable household item. Lighting designers during the Art Deco movement, originating in the glamorous roaring ’20s, sought to celebrate modern life by fusing modern metals with dark woods and dazzling colors in the fixtures of the era. The geometric shapes and gilded details of an Art Deco table lamp provide an air of luxury and sophistication that never goes out of style.

Some mid-century modern table lamps, particularly those created by the likes of Joe Colombo and the legendary lighting artisans at Fontana Arte, bear all the provocative hallmarks associated with Space Age design. Sculptural and versatile, the Louis Poulsen table lamps of that period were revolutionary for their time and still seem innovative today.

If you are looking for something more contemporary, industrial table lamps are demonstrative of a newly chic style that isn’t afraid to pay homage to the past. They look particularly at home in any rustic loft space amid exposed brick and steel beams.

Before you buy a desk lamp or table lamp for your living room, consider your lighting needs. The Snoopy lamp, designed in 1967, or any other “banker’s lamp” (shorthand for the Emeralite desk lamps patented by H.G. McFaddin and Company), provides light at a downward angle that is perfect for writing, while the Fontana table lamp and the beloved Grasshopper lamp by Greta Magnusson-Grossman each yield a soft and even glow. Some table lamps require lampshades to be bought separately.

Whether it’s a classic antique Tiffany table lamp or even a bold avant-garde fixture custom-made by a contemporary design firm, the right table lamp can completely transform a room. Find the right one for you on 1stDibs.