Dr. Mohamed Ismail was born in 1936 in Zagazig in Egypt. He graduated and obtained his Masters in painting from the Faculty of Fine Arts in Cairo. He received his Ph.D. in the history of Fine Arts. He held numerous private and collective exhibitions from 1958 – 1969. Dr M.Ismail started his globe trotting from 1969 till 1987. He started with Europe visiting Greece, Spain and France going to North Africa and then to Turkey in the Near East. He moved on to Beirut, Kuwait, Iran and India before breaking camp to his favorite continent the Far East. In Tokyo he knew love and considered it home. He has many acquisitions in several countries and the most important is in Museum of Hiroshima and Nagasaki. He obtained many International and Arab prizes.
Since 1969 Dr.Mohamed Ismail has not exhibited his work in Egypt. He has been globe-trotting ever since. In South Europe he lived for many years, savoring the Greek and Roman civilizations. He lived the old Andalus in modern Spain. He lived in France, Europe’s art center. He had seen many European states before he rambled on to North Africa then back to the Near East where he lived in Azmir, Turkey, for a long time. He moved to Beirut when it was still the "Bridge of the Mediterranean". He flew to Kuwait then Iran under the bygone Shah. He left Iran to wander about the Gulf States. He bid the oil countries farewell taking wing to India, the thousand religions, and thousands tongues content of wonders. Then he broke.

Ismail received his PhD in history of fine arts in Cairo, after completing his degree in painting from the Faculty of Fine Arts in the capital. He took inspiration for his art through extensive globetrotting exploits from 1969 to 1987 during which he visited numerous continents and countries. Ismail has been the recipient of various regional and international prizes. His paintings are housed in museums far and wide, most significantly, the Museum of Hiroshima and Nagasaki in Japan, which he considered his other home. The paintings from Ismail selected for this showing are both expressionist and abstract deconstructed renditions that span natural, socio- political and unconventional subjects. A saturated palette that never strays from natural, warm and earthen tones, and a mastery of illustrative styles from potent realism to emotive expressionism to imaginative abstraction, are what defines his career’s work. This emotive power he establishes through an uncanny ability to utilize limited color schemes that portray abundant detail, using fundamental color combinations such as contrasting black and white or complementary green and brown to animate intricate and complicated shapes, forms and figures. Ismail’s own versatility is showcased here, and its worthiness.

H 57 in. W 79 in.
Hossam Dirar "Dancing with" acrylic on linen painting
By Hossam Dirar
Located in Culver City, CA
"Dancing with" (2016) by Hossam Dirar 46” x 30” Mixed media on linen canvas CHAOS This project is a representation of the life around me right now. All that nonsense and frivolit...
Category 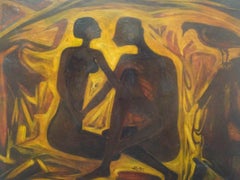 Find wide variety of authentic Mohammed Ismail art available for sale on 1stDibs. You can also browse by medium to find art by Mohammed Ismail in wood, paint, oil paint, and more. Much of the original work by this artist or collective was created during the 20th Century and is mostly associated with the Contemporary style. Not every interior allows for large Mohammed Ismail art, so small editions measuring 7 inches across are available. Customers interested in this artist might also find the work of Ritu Sinha, Myron Stephens and Agnieszka Zawisza. On 1stDibs, the price for these items starts at $2,600 and tops out at $2,700, while the average work can sell for $2,650.