W 0.44 in. L 0.44 in.
Tiffany & Co. Star Ruby Diamond and Platinum Dress-Set, Circa 1950
By Tiffany & Co.
Located in London, GB
A Tiffany & Co., vintage, ruby and diamond dress-set, comprising of a pair of cufflinks and three dress studs, each set with an oval cabochon star ruby, in the centre of platinum squ...
Category 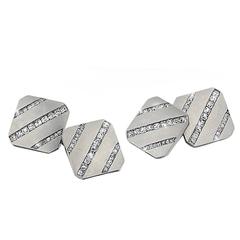 W 0.5 in. L 1 in.
Tiffany & Co. Sapphire Diamond Platinum Cufflinks
By Tiffany & Co.
Located in Carmel-by-the-Sea, CA
An important pair of sapphire and diamond cufflinks, rendered in platinum and signed by Tiffany & Co. The square sapphires weigh 3.36 carats in total while the diamonds weigh approxi...
Category

Edwardian Tiffany & Co. 14 Karat Platinum Cufflinks and Shirt Studs Set in a Box
By Tiffany & Co.
Located in St.amford, CT
Circa 1910s set of cufflinks or cuff links with a set three shirt studs constructed from solid 14 Karat yellow gold. Each cufflink is set with a round polished mother of pearl. Along...
Category

A fine pair of cufflinks by Tiffany & Co.

Art Deco Tiffany & Co. Cufflinks and Studs Dress Set
By Tiffany & Co.
Located in Greenwich, CT
A classic nine-piece tuxedo set in Platinum with mother-of-pearl plaques with iridescent overtones, dotted with a round diamond in the center and presented in octagonal white frames....
Category

Tiffany & Co. Gold Egyptian Revival Cufflinks
By Tiffany & Co.
Located in London, GB
A pair of 18ct yellow gold cufflinks by Tiffany & Co. Each side decorate in platinum relief with an Egyptian Gods Maat and Anubis. American, circa 1920. Each cufflink measures 1.8c...
Category

Tiffany Pave Diamond Platinum Dumbbell Cufflinks
By Tiffany & Co.
Located in Greenwich, CT
Dumbbell-style "Etoile" cufflinks in platinum, with pavé-set diamond half-dome on one side and polished platinum dome on the other, the diamonds weighing approximately 2.38 total ca...
Category

L 1.1 in.
Get Updated with New Arrivals
Save "Tiffany Platinum Cufflinks", and we’ll notify you when there are new listings in this category.

How Much are Tiffany Platinum Cufflinks?

On average, tiffany platinum cufflinks at 1stDibs sell for $4,000, while they’re typically $1,100 on the low end and $65,000 for the highest priced versions of this item.