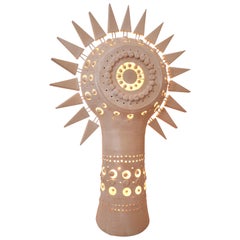 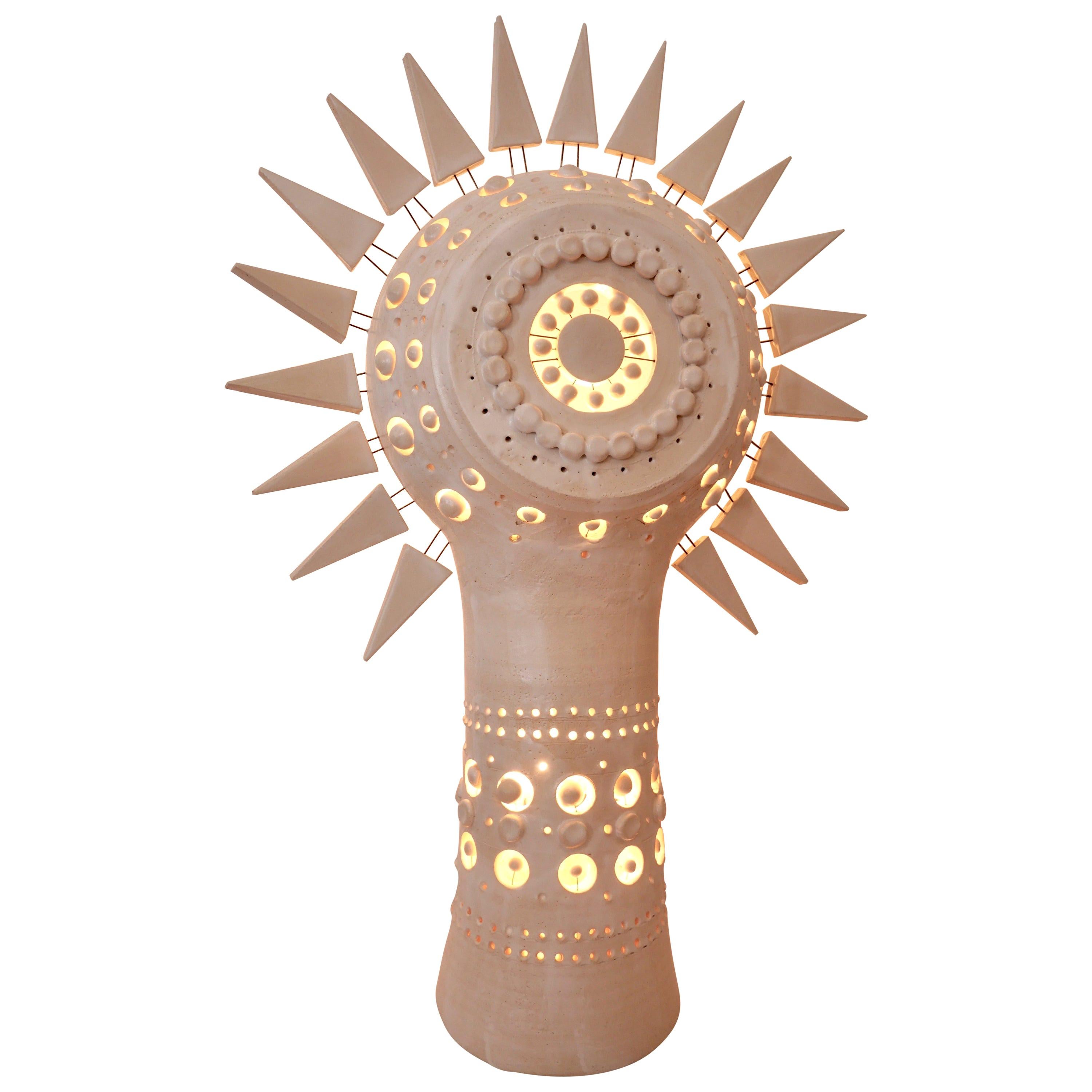 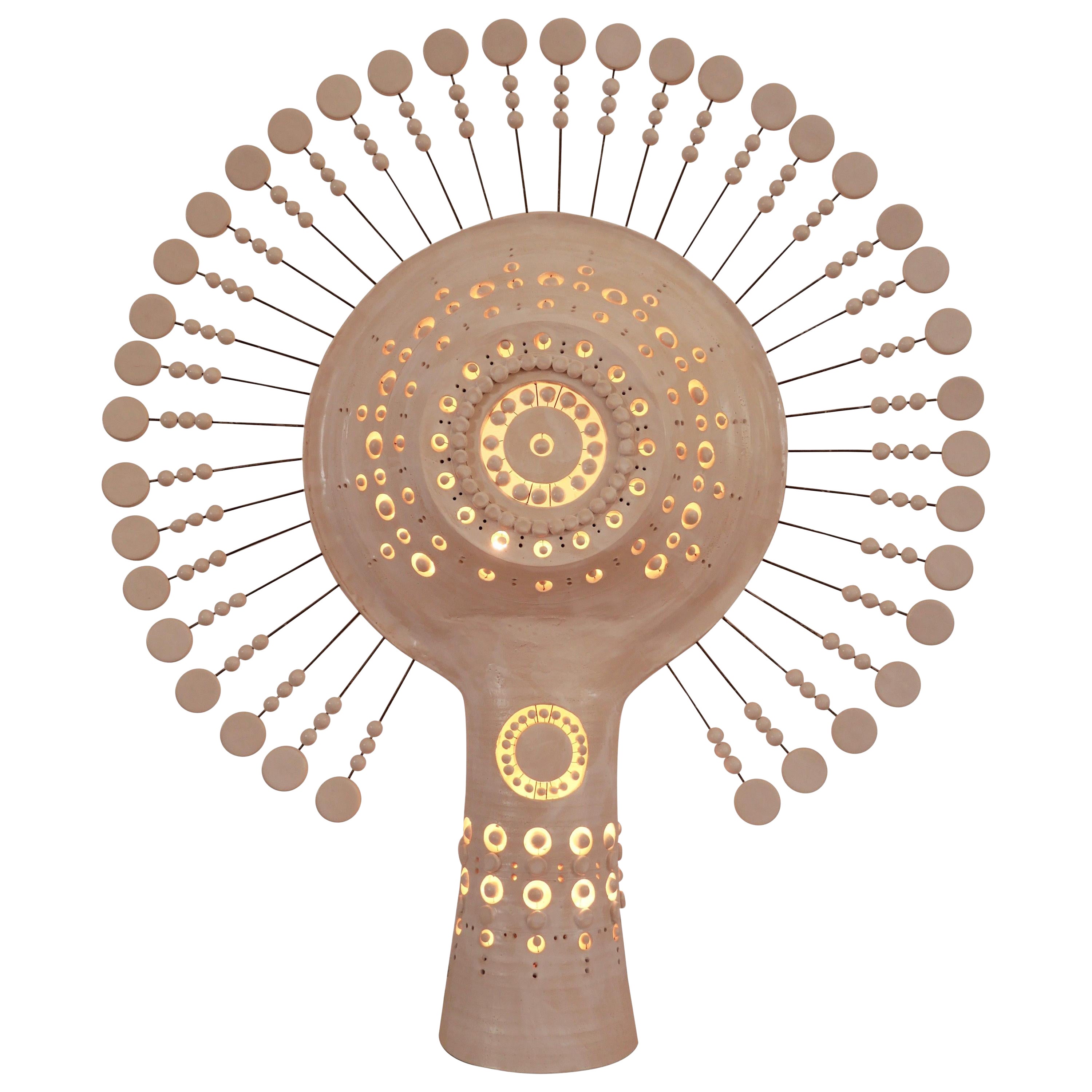 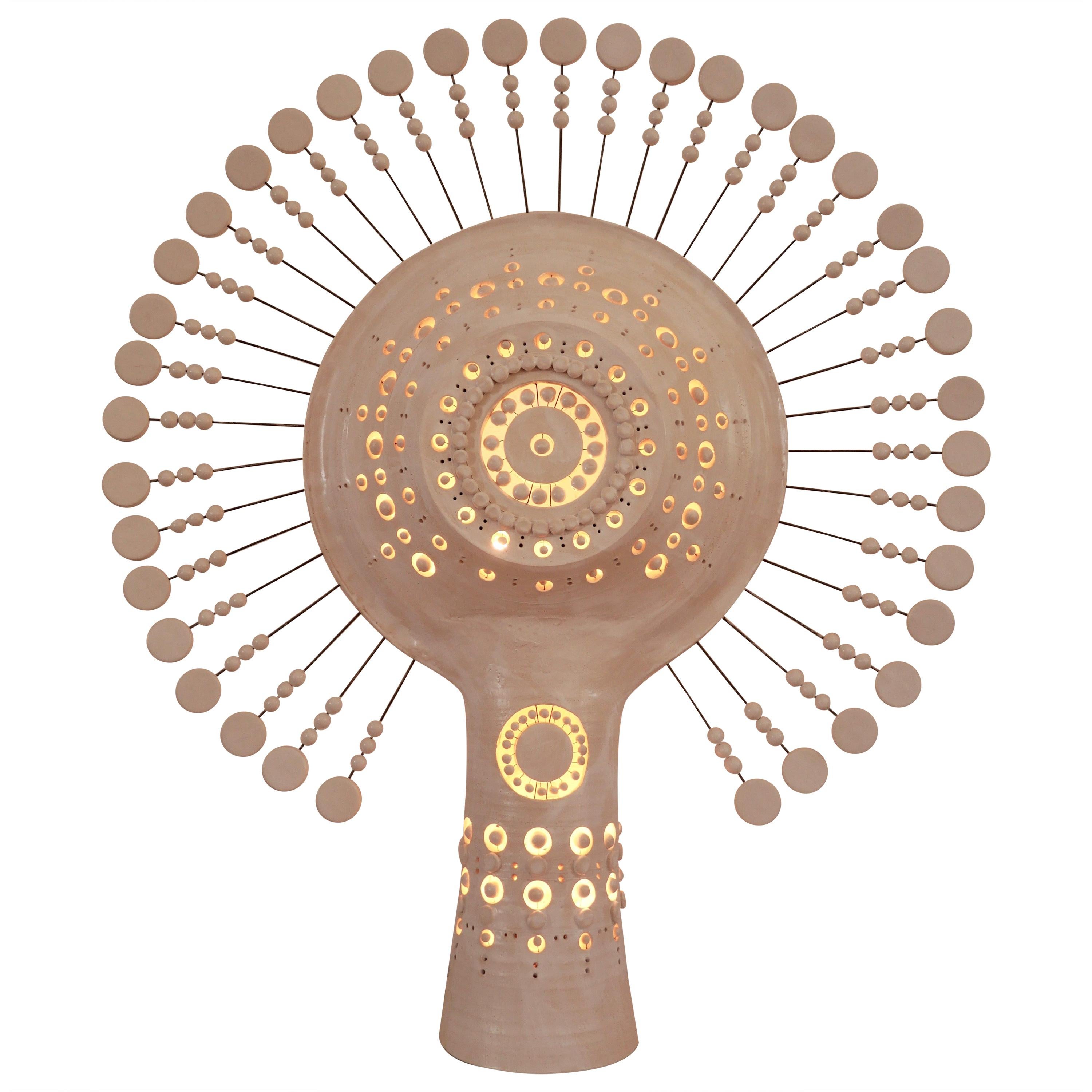 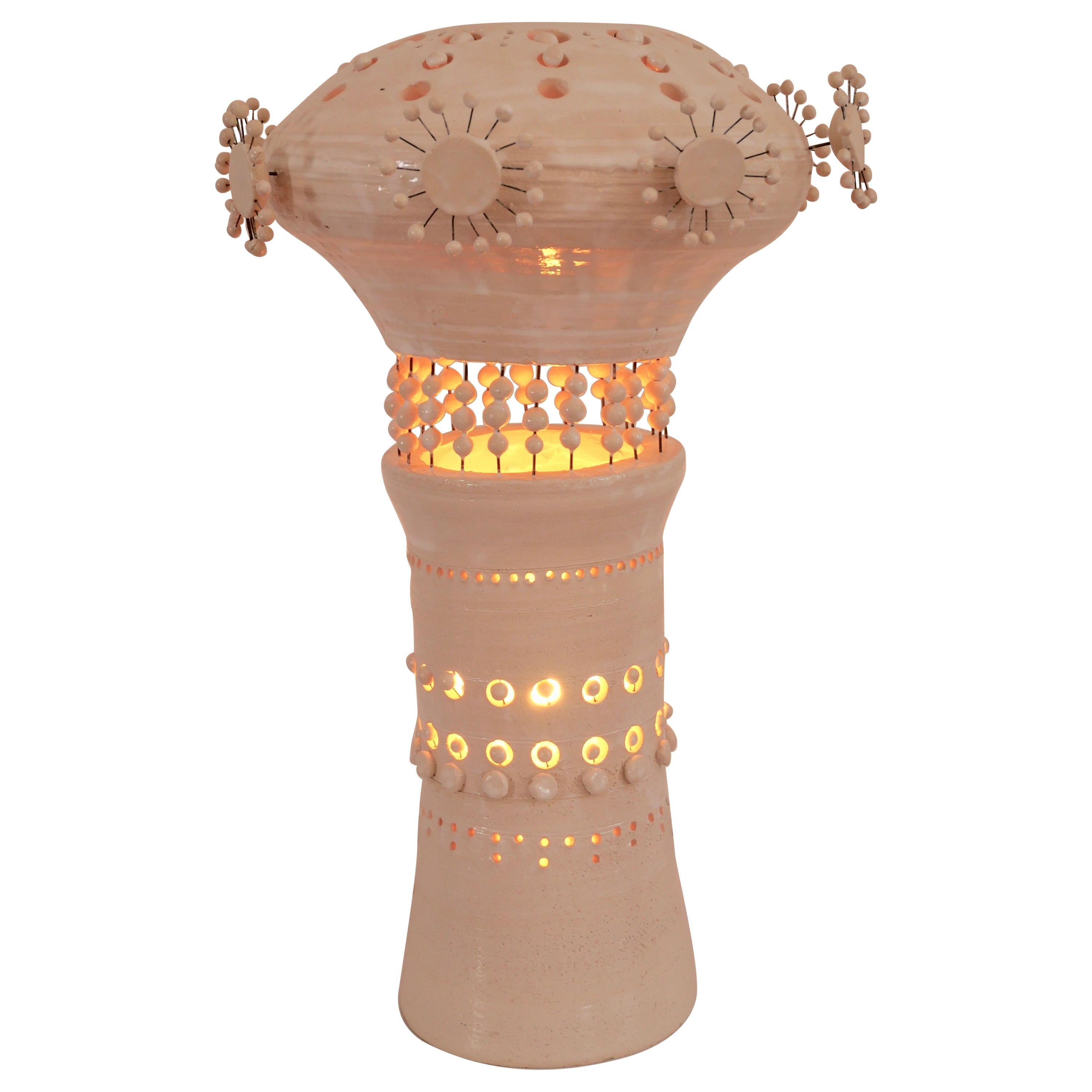 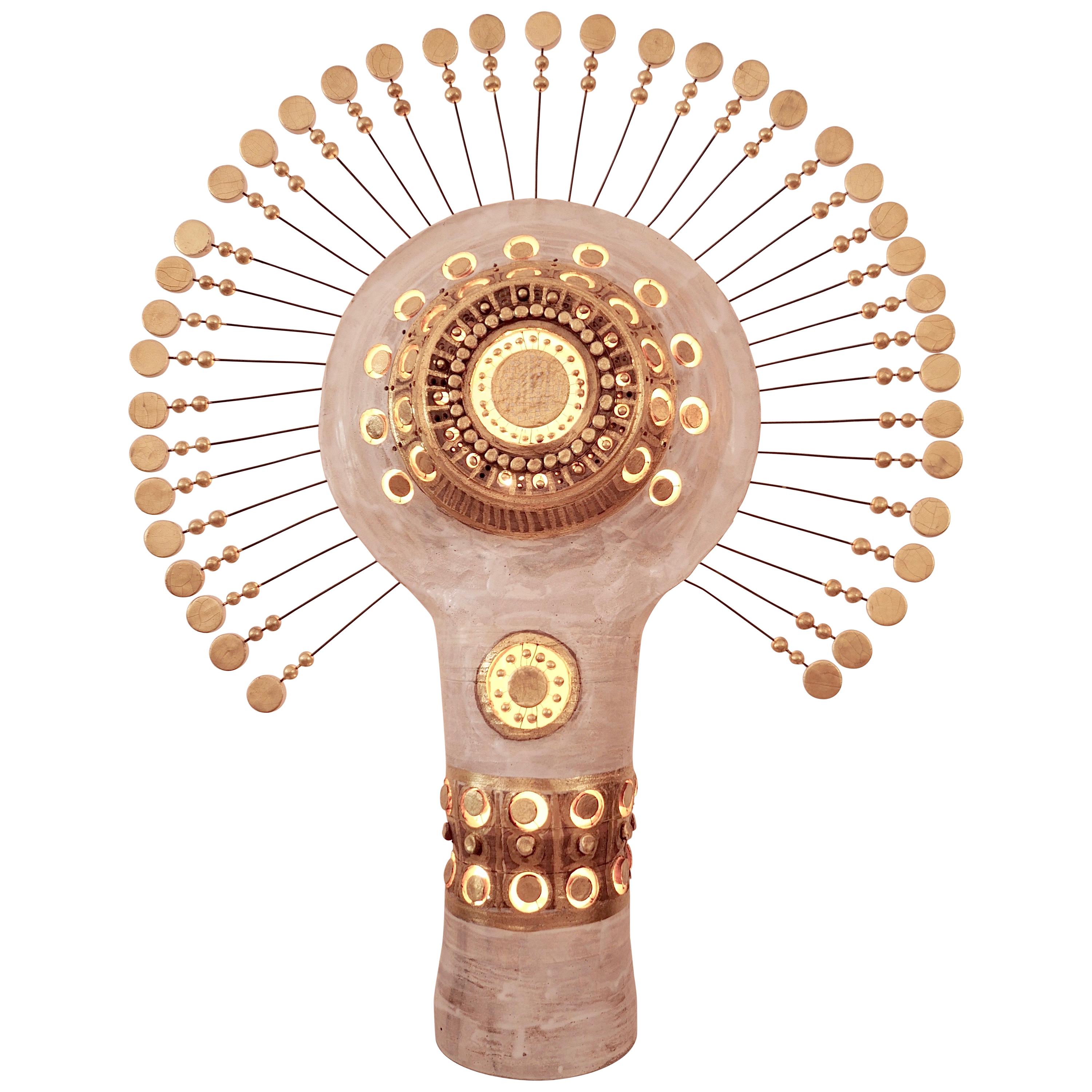 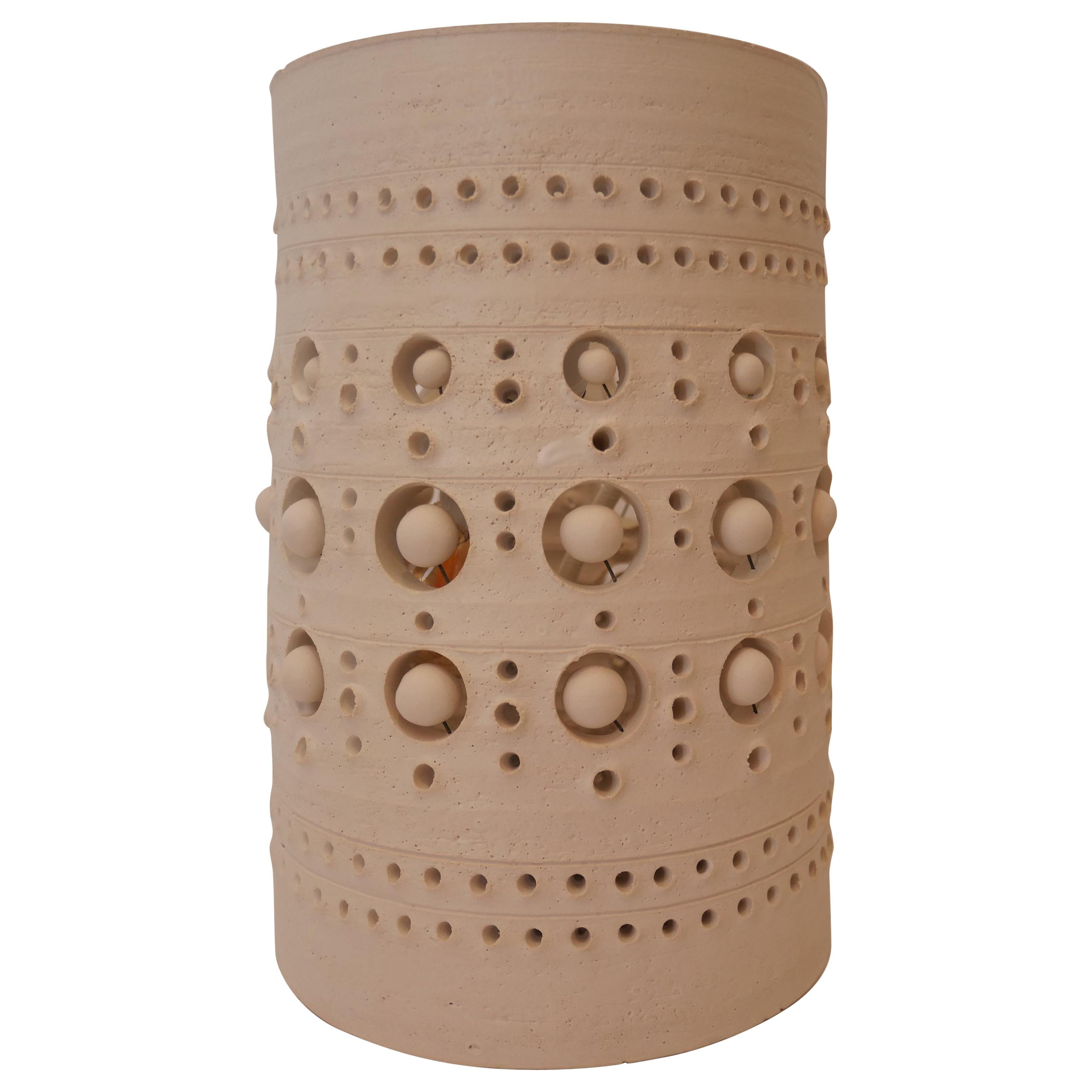 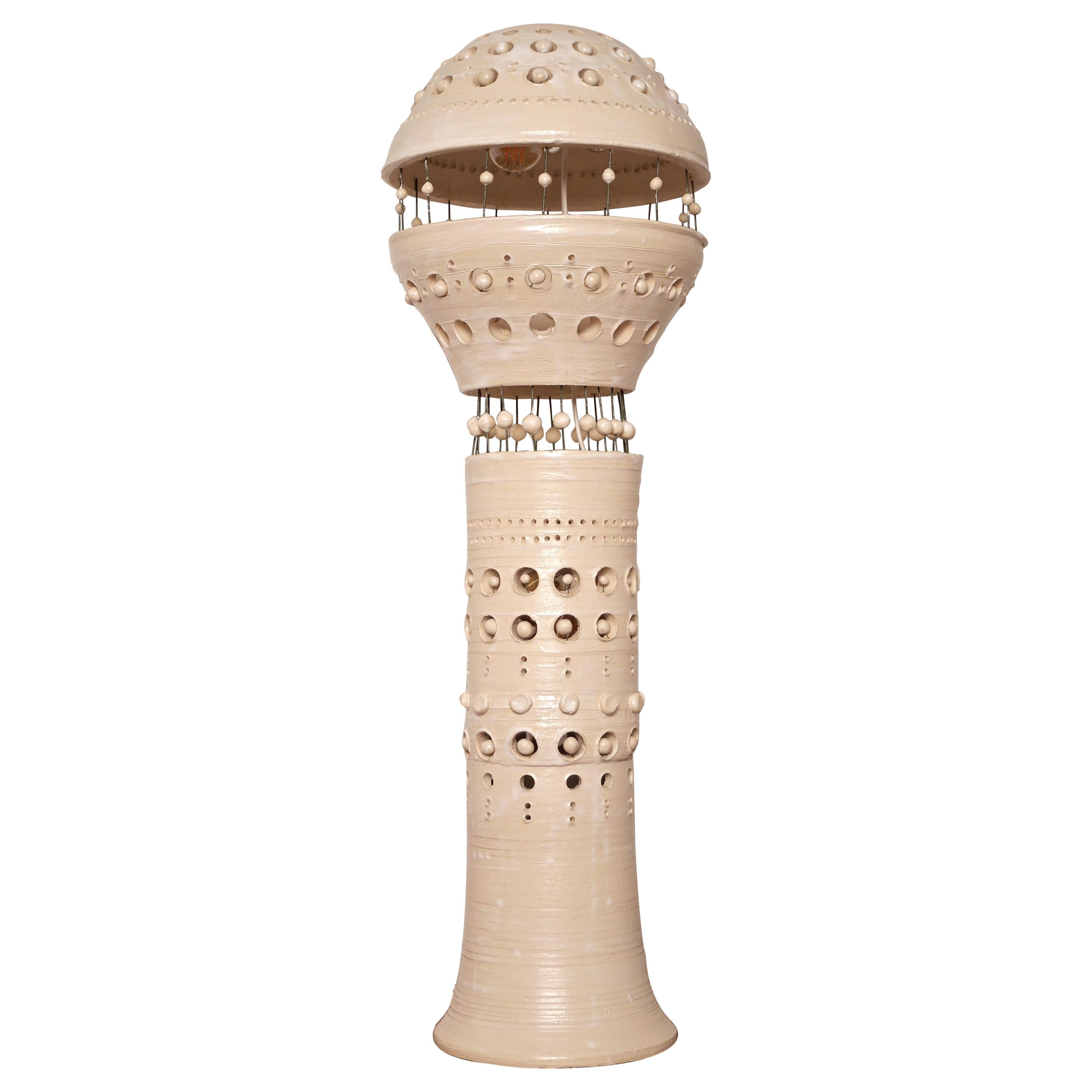 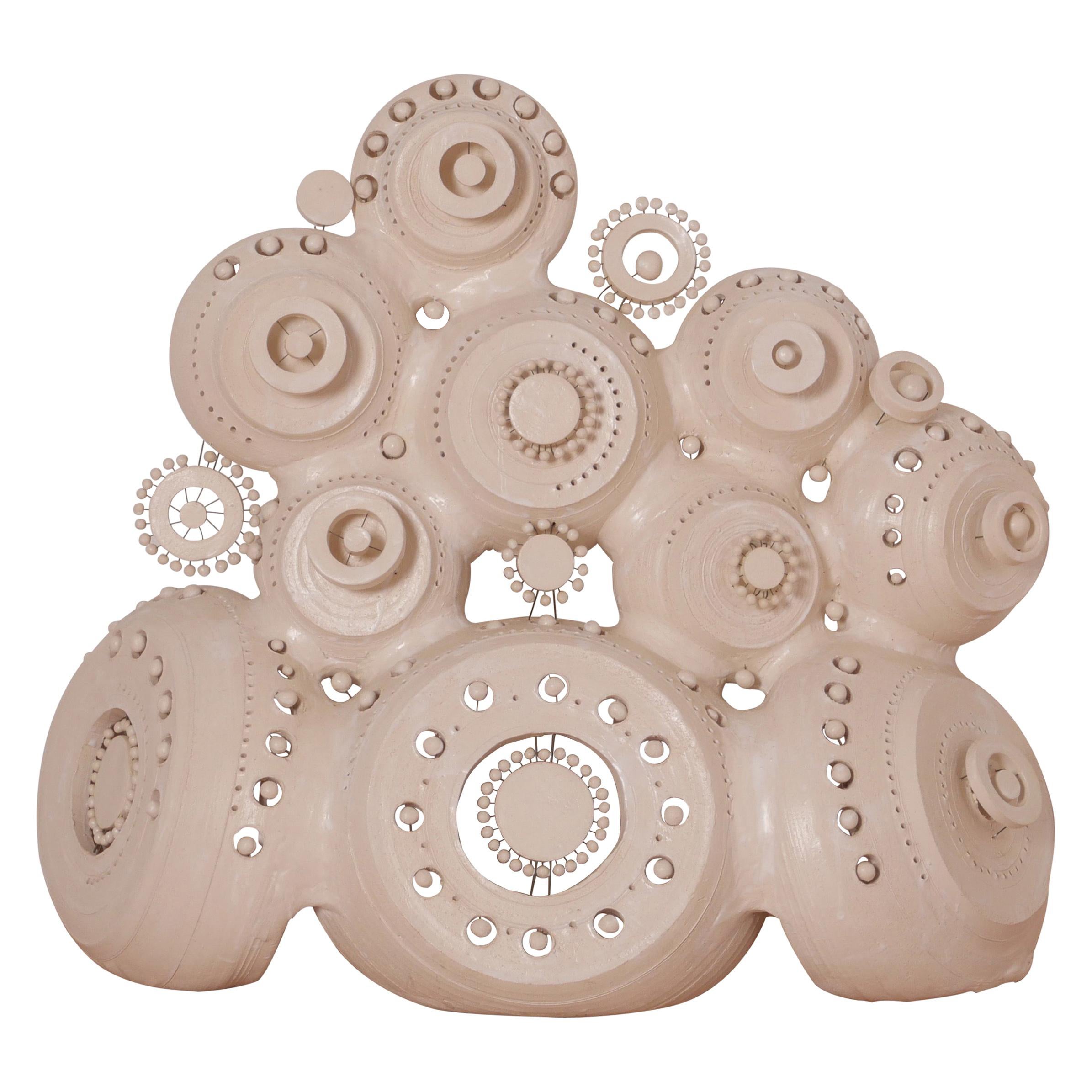 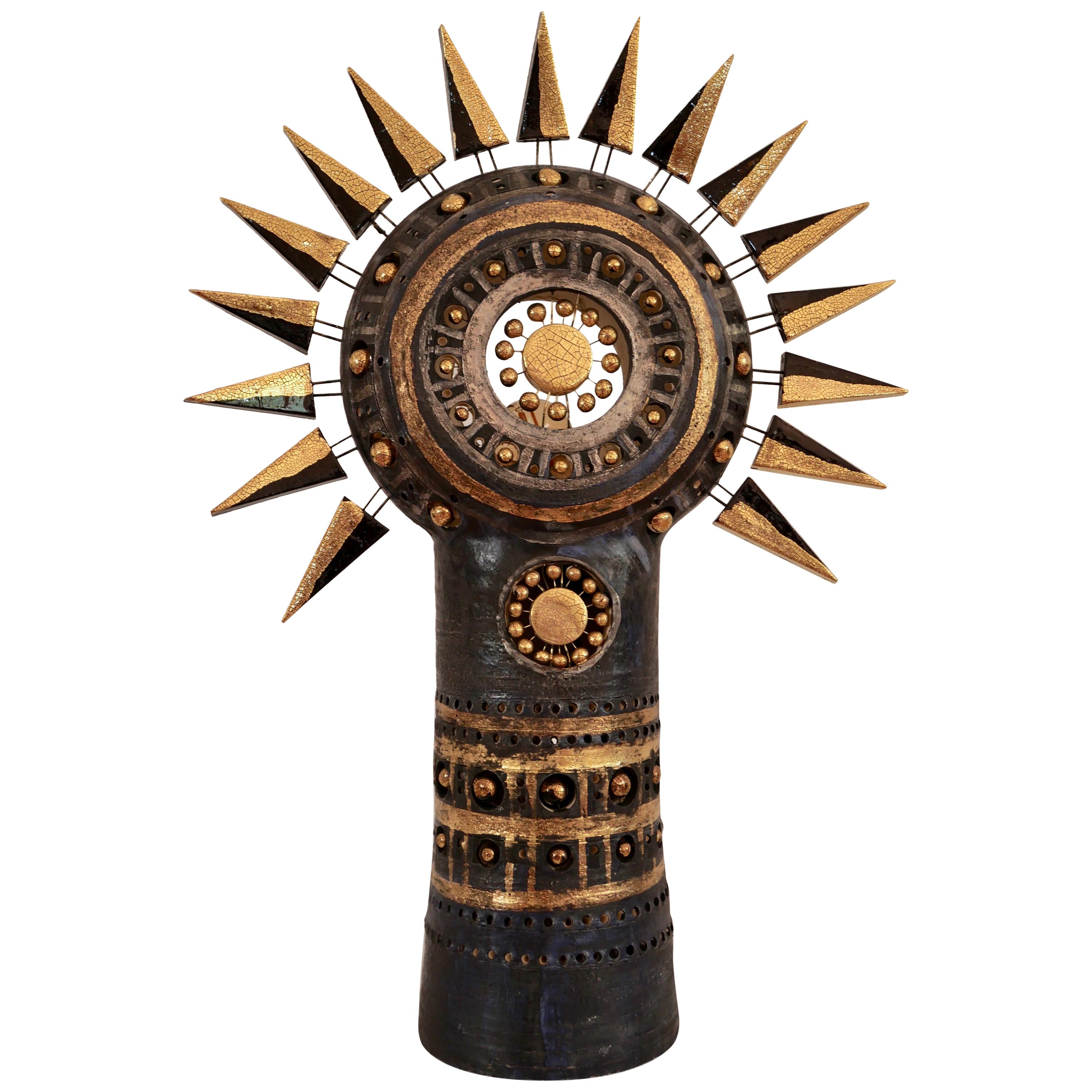 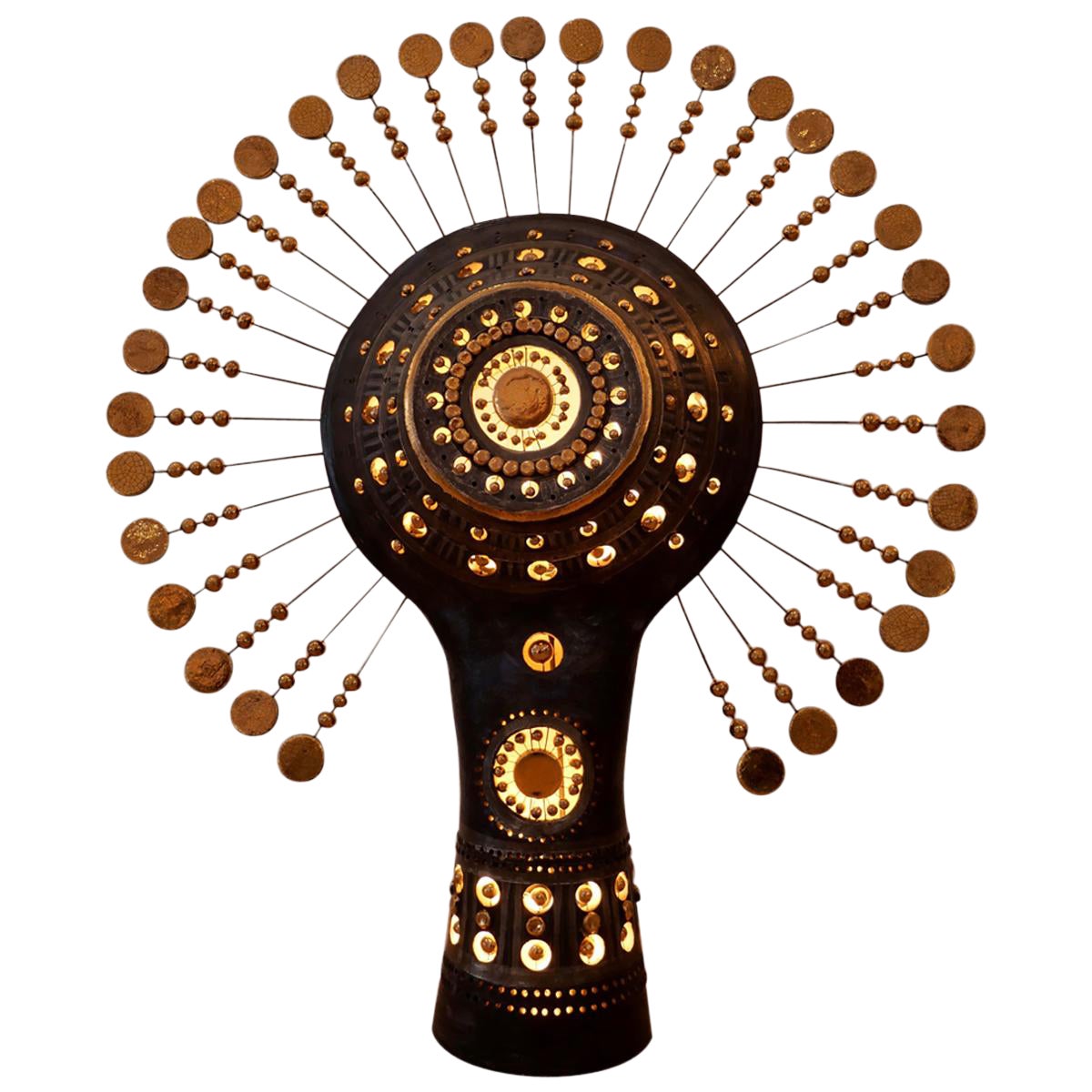 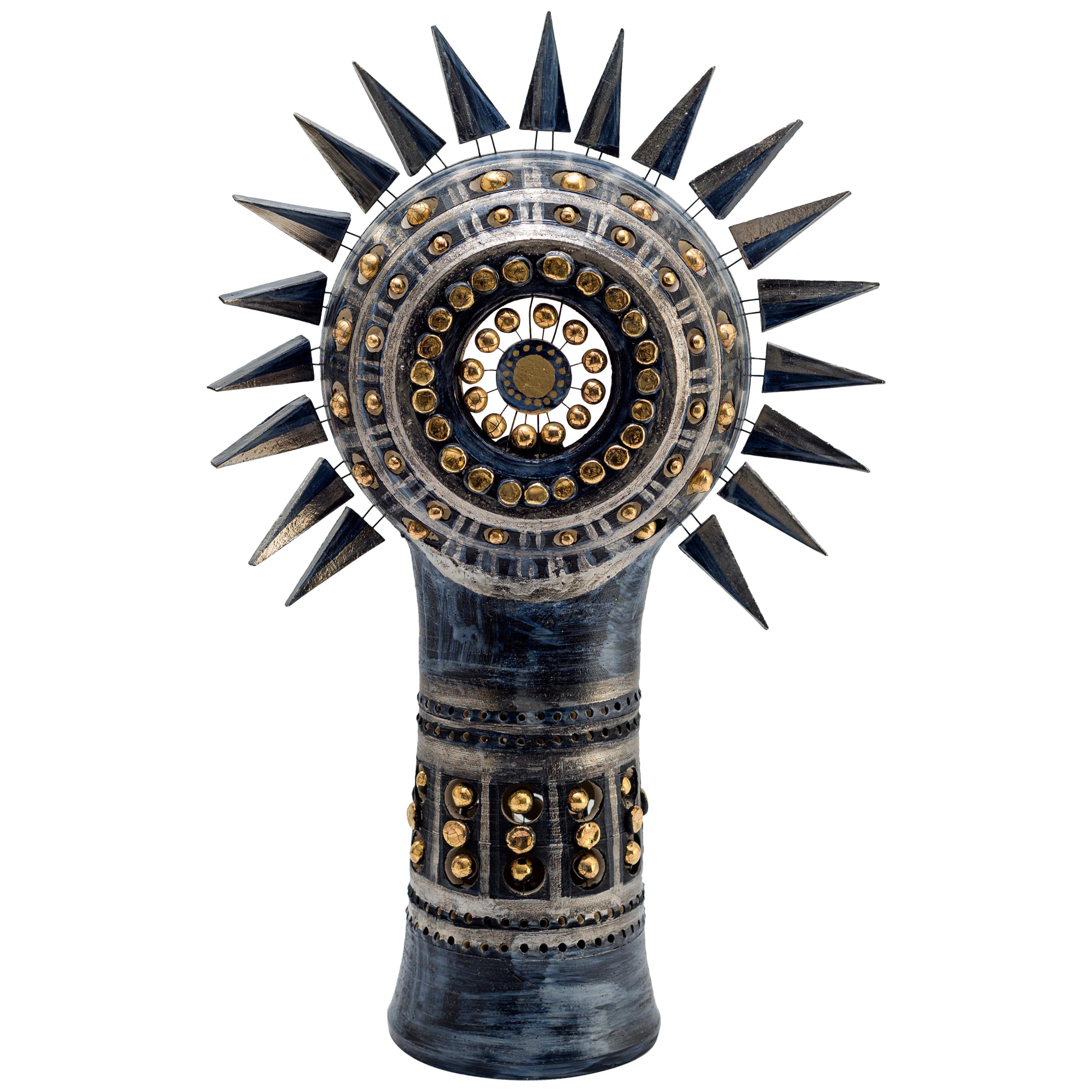 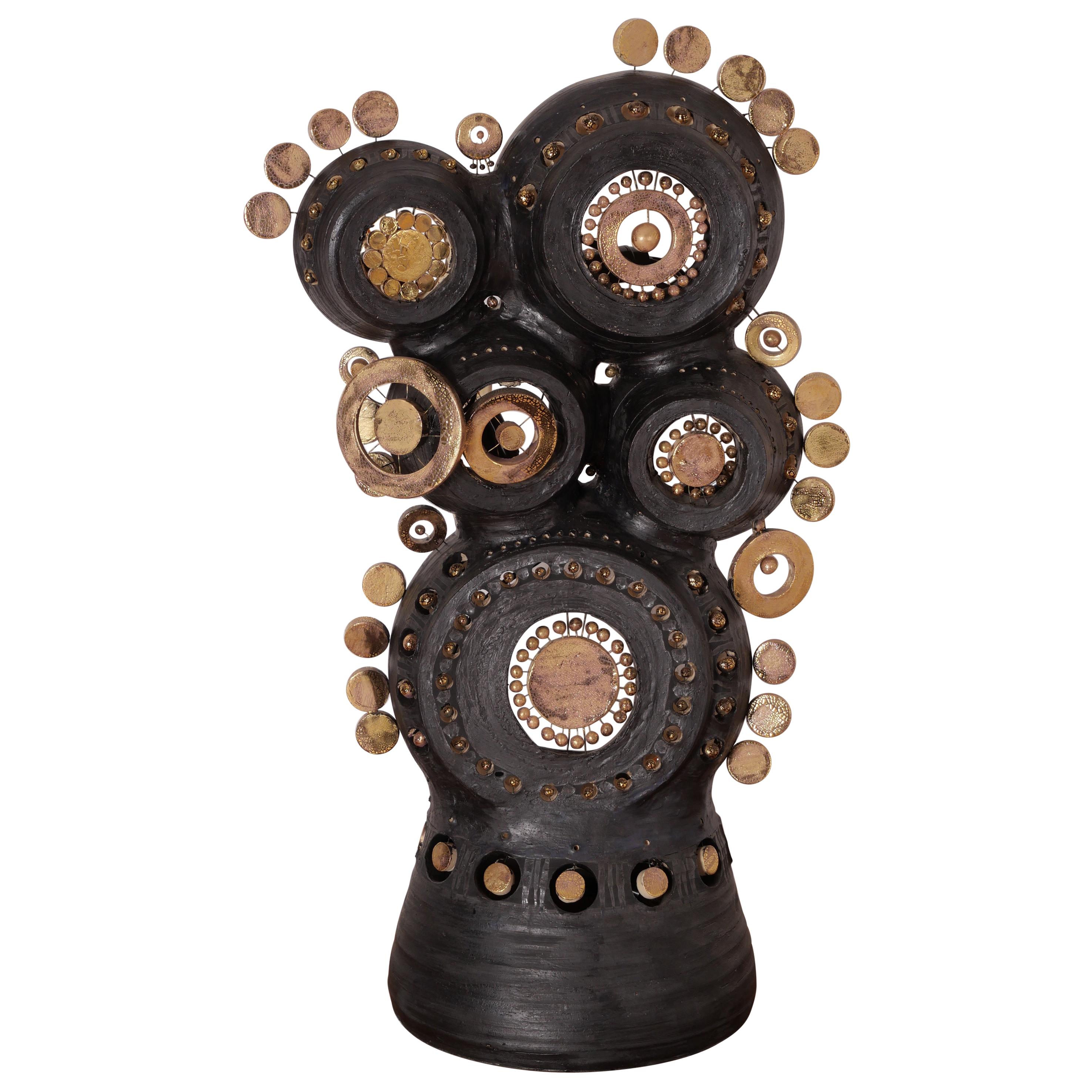 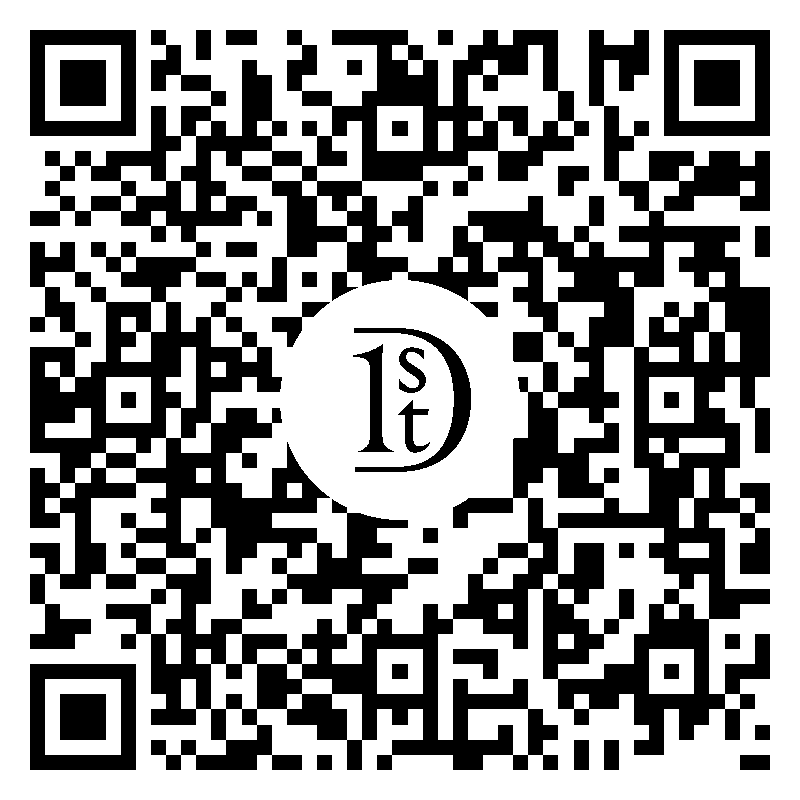 Sun table lamp in white enameled ceramic, table lamp bringing to your space an amazing light experience when the night falls, and a stunning sculptural presence during the day. Approximate dimensions height 57 cm x width 38 cm. Signed on the base by the artist, delivered with a "Certificate of Authenticity". Georges Pelletier (1938) is a great contemporary artist exploring the fields of ceramics and lighting since the 1950s. Born in Brusels in 1938. At the tender age of 12 he enrolls in the École du Pioulier, founded by Célestin Freinet and located in Vence in the South of France. Here he learns free and modern art and discovers drawing and ceramics. During this period Pelletier starts showing solidarity and relief based on the principle of equality. This formation lends him a unique artistic identity. Georges Pelletier arrives to Paris in 1953 and continues with his drawing studies at l’Académie Charpentier meanwhile he still frequents Fernand Léger’s workshop. He enrolls the school of Métiers d’Art in 1955. Pelletier deepens into the world of ceramics during his time at Claude Pantzer’s workshop and the Potiers d’Accolay where he meets Raphael Giarusso with whom he will later share a work studio for over a year. “Drawing is the starting point of everything. I started design at the same time as ceramics at l’école Freinet. It’s an art that has allowed me to address my creations.” Pelletier opens his first studio in Paris in 1961. He is quickly signed up by Maison Bobois (now known as Roche Bobois), which spread and sold his light creations until 1973. Later on, Pelletier moves to Cannes where he continues his work on the conception of ceramic items, lamps, mirrors and other sculptures inspired in the 1960s. Besides, he also displays his work in the Consortium, Dijon Contemporary Art Centre in France. In the 1980s, he started to produce his famous Totems ans Suns, these pieces has allowed the rediscovery of this bold artist whose creative genius brings light to the world’s most beautiful homes. The work of Georges Pelletier is presented by Galeria Tambien, a gallery that focuses on art, ceramics and design from the 1950s to present days, it is located in the town of Santa Gertrudis de Fruitera right in the middle of Ibiza island. 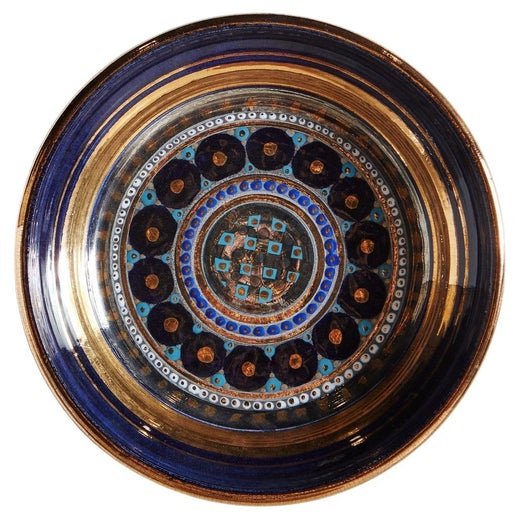 Those familiar with the work of Belgian ceramic artist Georges Pelletier know there is much more to his unique floor lamps and table lamps than meets the eye. From his stately, intricately detailed Totem floor lamp to his sculptural Owl table lamp, Pelletier’s talent for marrying ceramics with a simple light source to create complex shadow play will transform any interior into an illuminated work of art.

Born in Brussels in 1938, Pelletier developed a passion for ceramics in his youth. At merely 15 years old, Pelletier moved to Paris to study at the École Nationale Supérieure d’Arts et Métiers (now called Arts et Métiers ParisTech) before he went on to train in ceramics at the Pioulier School in Vence, France. Among his early instructors were ceramist Raphael Giarrusso and artist Fernand Léger. However, it was while working alongside a collective of potters in Accolay, Burgundy — a studio called Accolay Pottery, established by apprentices to well-known ceramicist Alexandre Kostanda — that he was likely inspired to experiment with cutouts and other carving techniques.

In 1961, Pelletier opened his first workshop in Paris, selling his ceramic lamps at the Saint-Ouen flea market. His works caught the eye of furniture design and manufacturing company Roche Bobois for which he created a series of lighting collections from 1961 to 1973.

In later years, Pelletier’s designs attracted the attention of Mathieu Tournaire, son of Philippe Tournaire, the founder of jewelry manufacturer Maison Tournaire. Charmed by Pelletier’s ceramic works and the playful light shows his fixtures would create in a space, Mathieu proposed a collaboration to develop a series of luminaires that would merge Maison Tournaire’s use of precious metals, such as silver and gold, with Pelletier’s distinct ceramics artistry. The partnership yielded a six-piece collection — three “Sun” luminaires, two floor lamps and a totem pole. Only three copies of each work exist.

In 1973, Pelletier opened a new workshop in Cannes, where he continues to work to this day. His ceramic lighting sculptures are coveted by art collectors worldwide.

About the Seller
5.0
Located in Santa Gertrudis, Spain
Vetted Seller
These experienced sellers undergo a comprehensive evaluation by our team of in-house experts.
Established in 2018
1stDibs seller since 2019
68 sales on 1stDibs
Typical response time: 4 hours
More From This SellerView All
People Also Browsed
You May Also Like