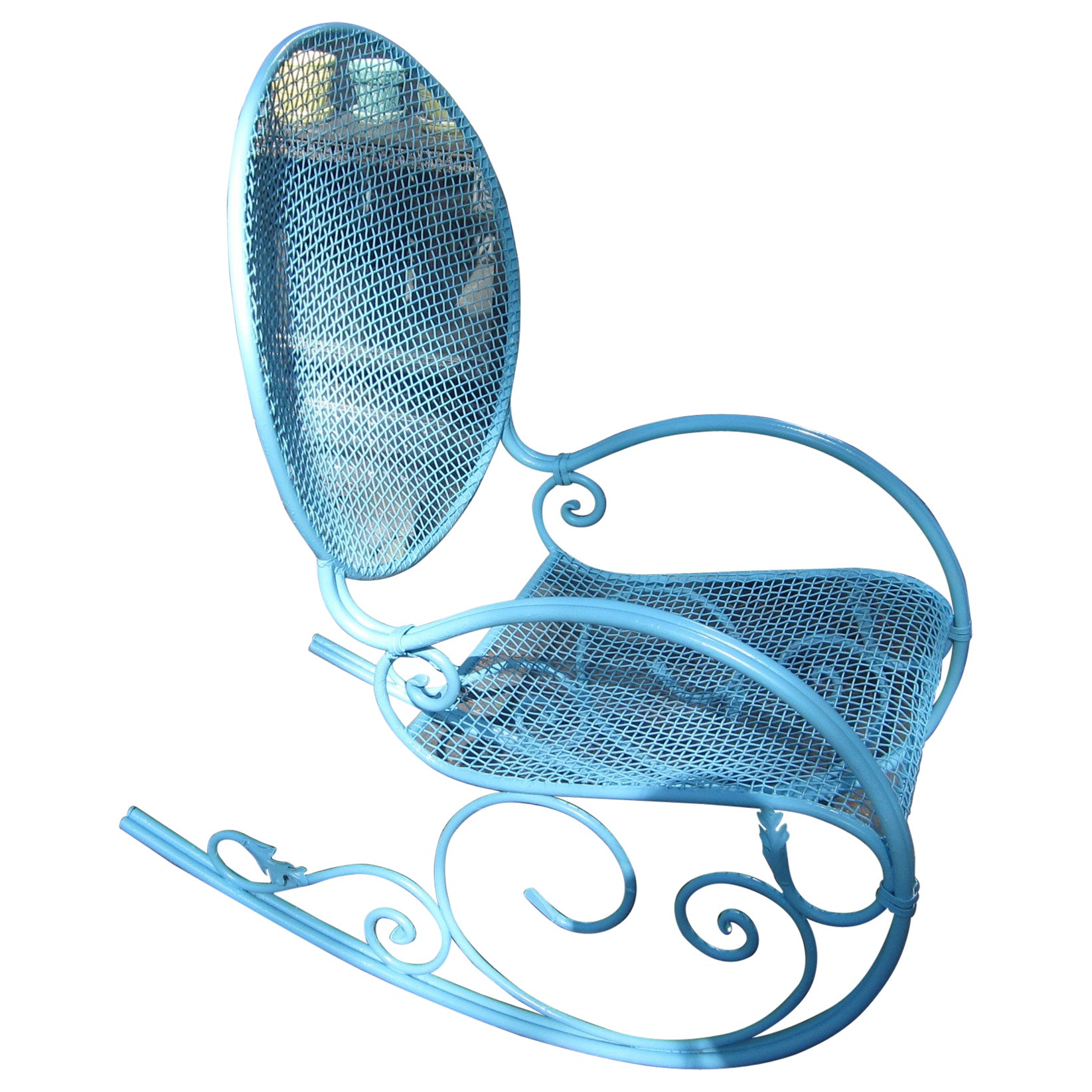 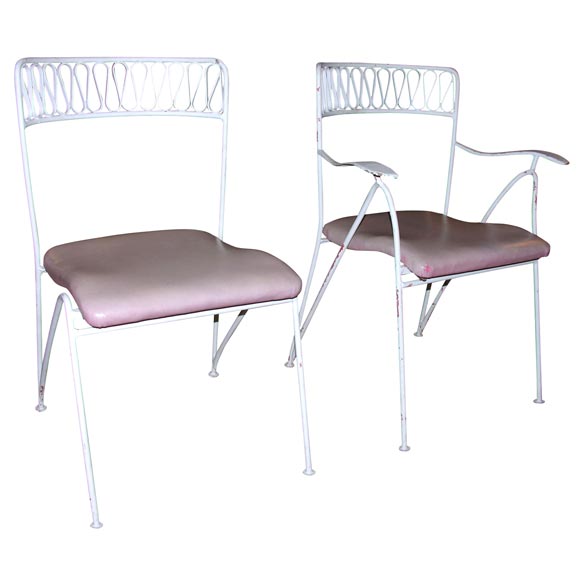 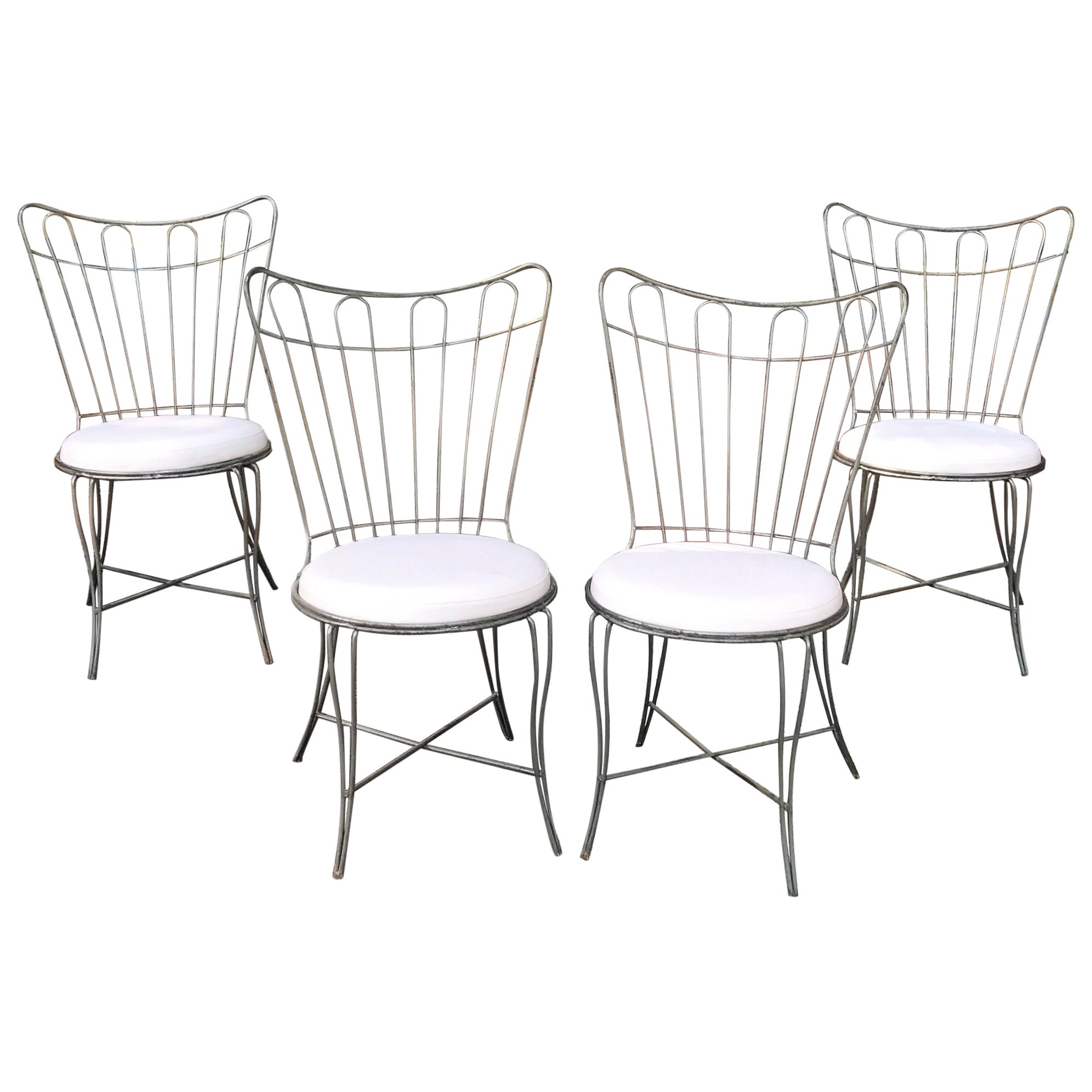 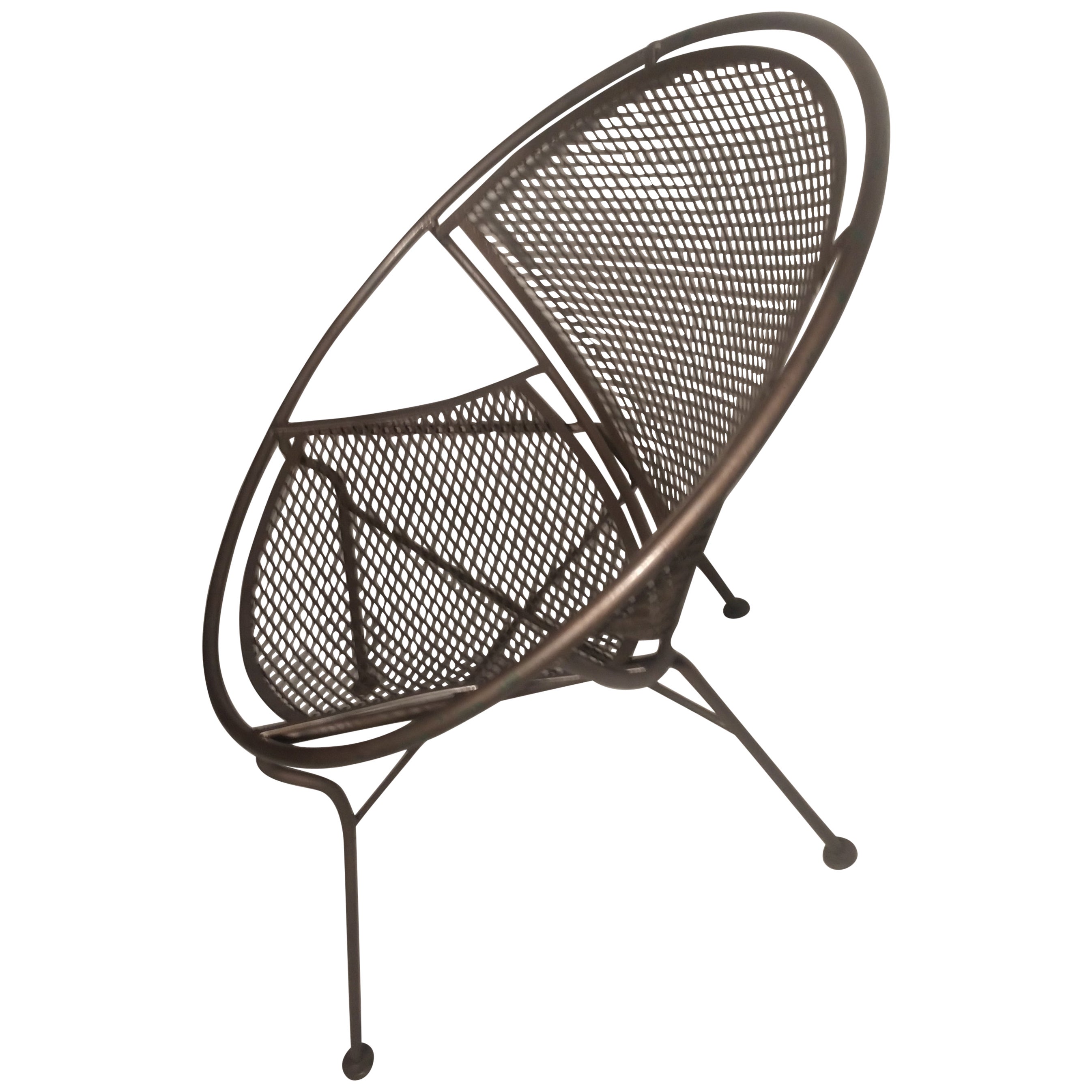 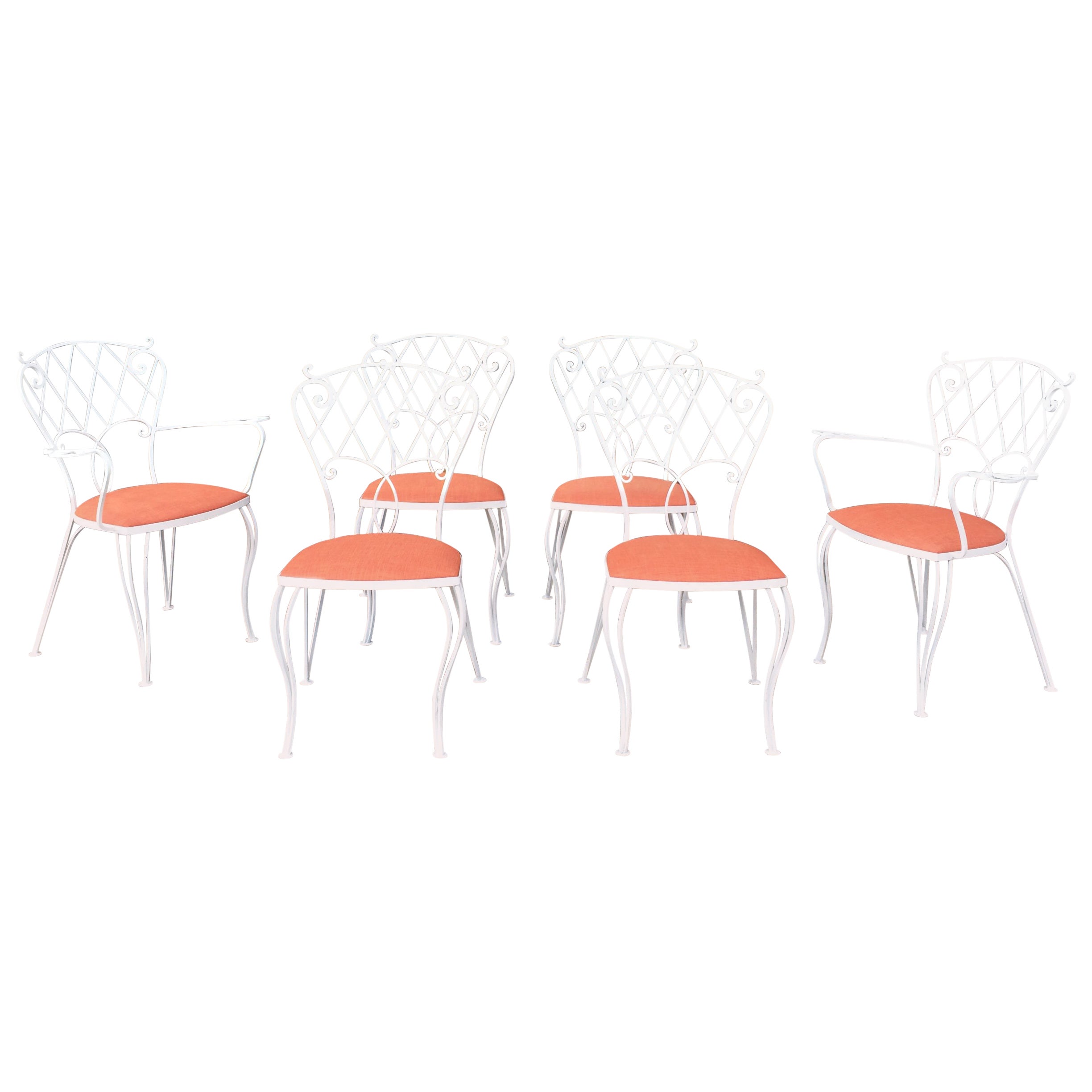 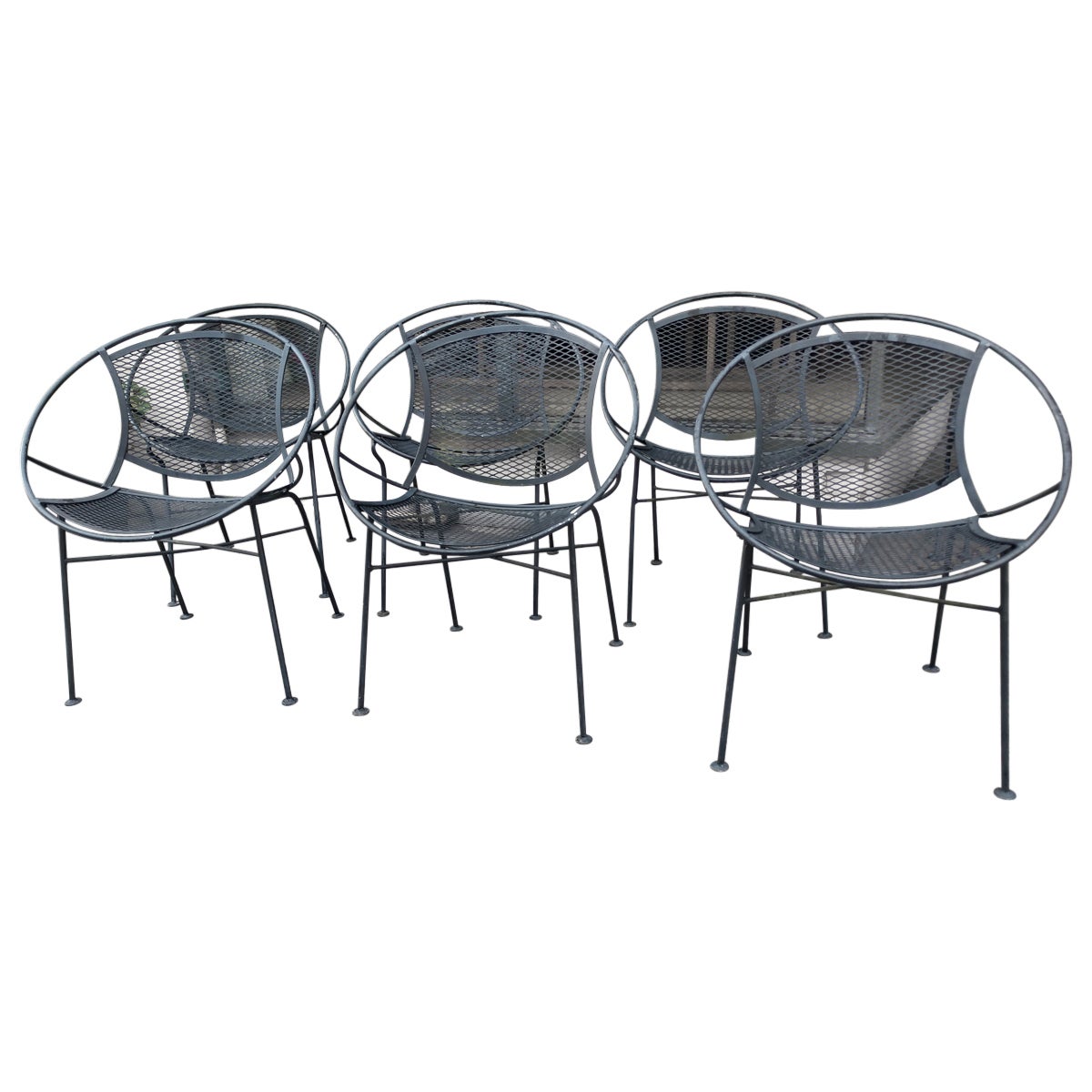 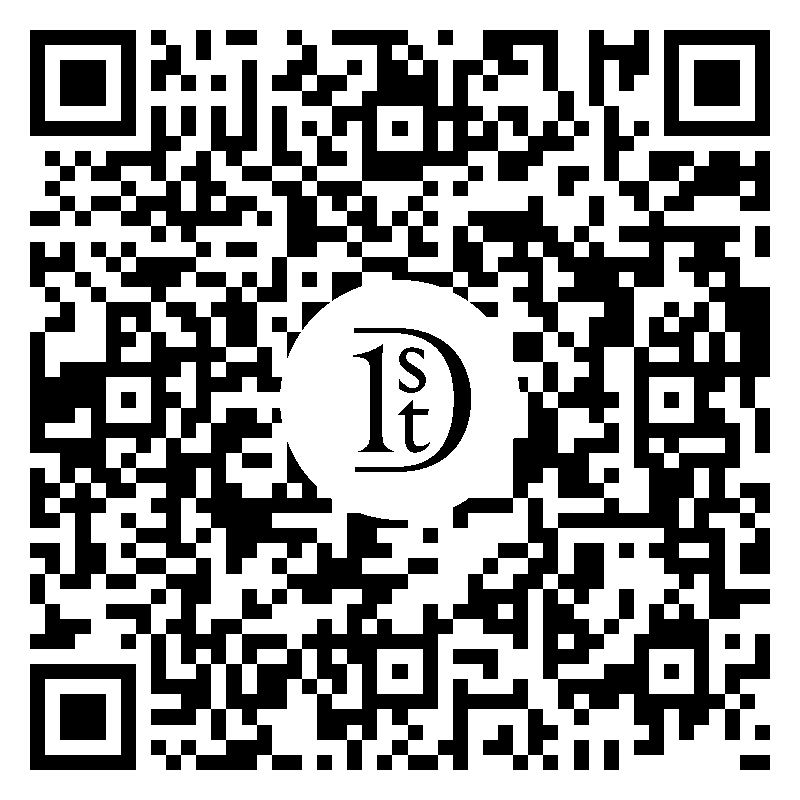 John Salterini for Russell Woddard Mid-Century Modern set of five iron patio chairs. The set comes with individual upholstered seat and back cushions. Makers mark on the back of the seat. In great vintage condition with age-appropriate wear and use.

While John B. Salterini (1928–52) designed ornate wrought-iron garden furniture for patios and lawns, he specifically sought to match the forms of indoor furniture and also advocated the use of his furniture indoors “because it brings into your home the freshness and gaiety of a flowery summer garden” (per his print advertisements).

After emigrating from Italy to New York, Salterini worked in journalism at first, editing a newspaper in Syracuse. When he moved to New York City, he worked in glass manufacturing and then entered into the production of wrought-iron furniture as a partner in Salterini & Gallo. When that company shuttered, he launched his own eponymous firm in 1934, eventually offering some of the most exquisite, high-end outdoor furniture of the mid-century period.

Over the course of his career, Salterini designed a wide range of furniture, from tables and chairs to chaise longues, ottomans and benches. And his influences were equally wide as well. His work is often identified as mid-century modern — the Clamshell line, designed for Salterini’s company by like-minded Italian architect and industrial designer Maurizio Tempestini, boasts soft curves and cocoon-like shells that strike a sharp contrast with the solidity of wrought iron and resemble the zany chair designs emerging during the postwar period from designers like Pierre Paulin and Arne Jacobsen.

The furniture from John B. Salterini Company also combined organic and geometric forms, one of the mid-century design movement’s defining features. But Salterini was equally influenced by the Gothic Revival and Art Deco movements, incorporating their signature flourishes like intricate lace-like patterns, delicate vine leaves and protruding scrolls into his French Provincial Group’s glass-topped tables and chairs. One of his most ornate and ostentatious designs is the Peacock double chaise longue, with its elaborate spokes and arching back.

The postwar boom in prosperity and leisure time led to the expansion of the home to include patios, which needed to be furnished with stylish outdoor furniture. Wrought iron was considered the best material for outdoor use because of its comparative lightness and pliability to other metals. The term “wrought” means made by hand, as opposed to “cast” iron, which was made using molds. Salterini’s high-end handcrafted furniture, with names like Park Avenue Group — promoted for indoor use and photographed as such for the firm’s catalogues — attracted wealthy buyers from across the country. They were drawn to his ability to make a metal like wrought iron look almost ethereal and elegant, and the way he incorporated the popular styles and design principles of the day into his pieces.

That John B. Salterini’s garden furniture — a collection of which can be found on 1stDibs — can be used indoors and look completely natural is a rare feat. 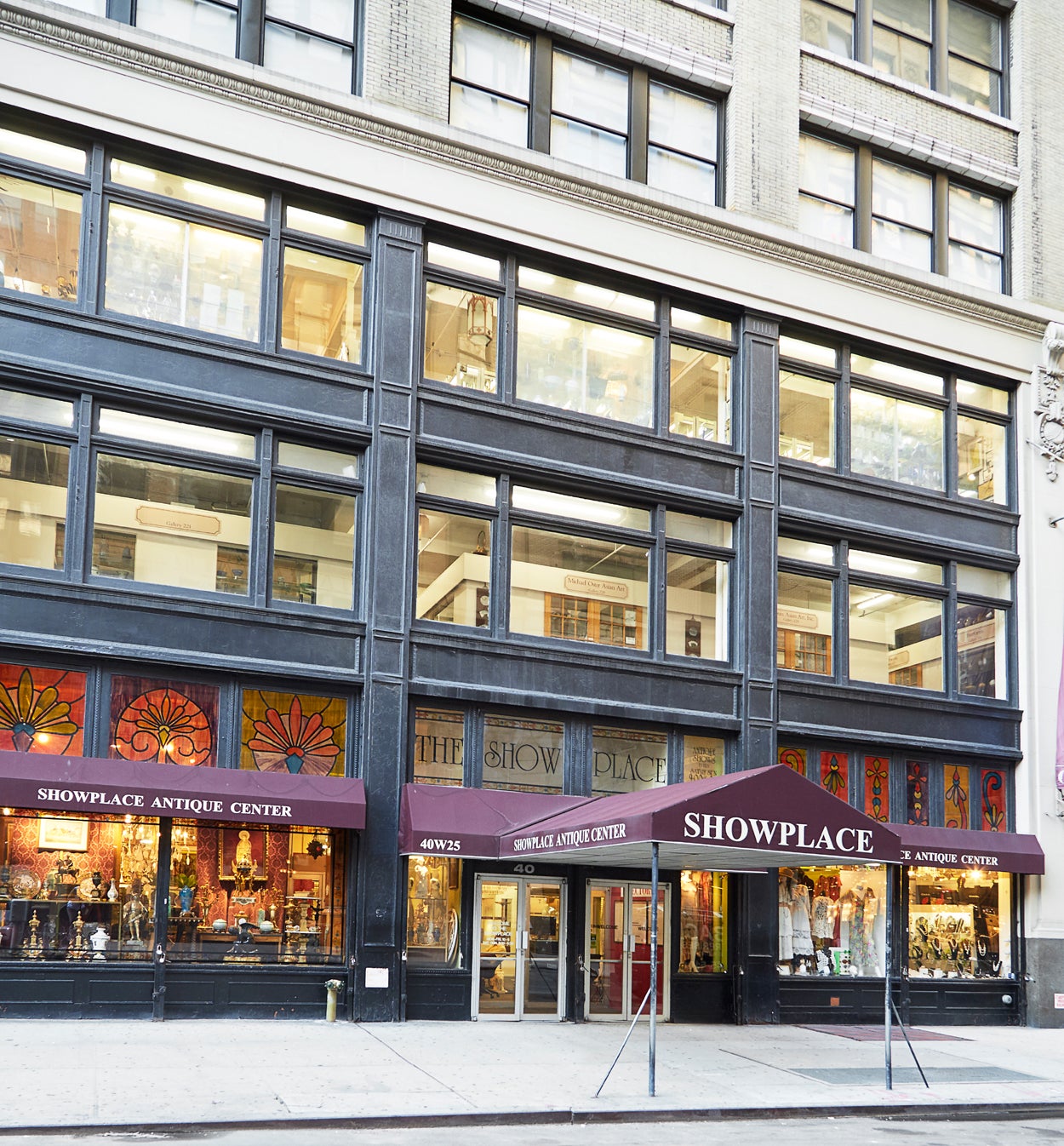 About the Seller
4.8 / 5
Located in New York, NY
Vetted Seller
These experienced sellers undergo a comprehensive evaluation by our team of in-house experts.
1stDibs seller since 2010
1,743 sales on 1stDibs
Typical response time: 12 hours
More From This Seller
View All From Seller

$1,800
Set of 14 Fancy Wrought Iron Ribbon Chairs by Tempestini for Salterini
By John Salterini
Located in New York, NY
A set of 14 wrought iron ribbon back dining chairs comprised of 12 sides and two armchairs. By Maurizio Tempestini for John Salterini, American, circa 1950. Price is COM and refinish...
Category